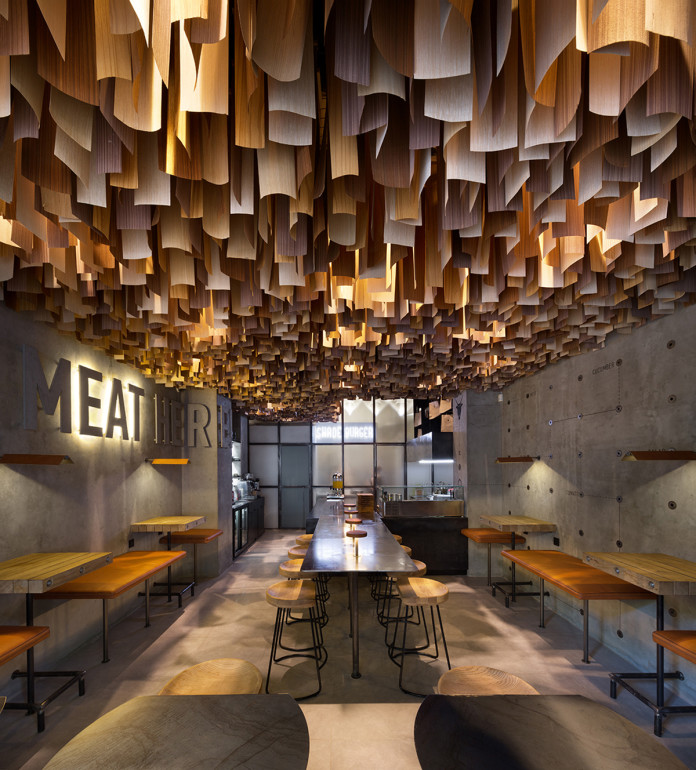 YOD Design Studio has completed its new food&beverage restaurant and cafe in Poltava, Ukraine. Called Shade Burger/Cafe, the brutalist and ascetic space features thousands of twisted wooden sticks hanged from the ceiling of the Burger joint.

Covering a total of 50 square-meters area, Shade Burger is a new burger restaurant in Poltava, which provides a stylish atmosphere, reasonable prices and the tastiest burgers in the city. Thanks to right approach to zoning, a small area could place 25 seats.

The interior is somewhat ascetic and brutal that characterizes American burger bars. The design concept is directly related to the cuisine and centered on the burger itself. This simple and extremely popular food consists of some essential ingredient combination.

A similar combination of materials formed the interior of Shade Burger. Its main ingredient is natural tree veneer hanging from the ceiling and symbolizing minced meat. This veneer used to be noted at Shade meat&wine (another restaurant developed for our client). The central panel made of veneer plates creates an illusion of sunlight passing through the trees.

Now the veneer has appeared on the ceiling reminding of the mince passing a meat grinder. Actually, the image of a meat grinder formed the basis of corporate identity. It occurs on the logo and other identity elements, giving a key to understanding of the interior.

The new place is aimed, above all, at young, cosmopolitan and open-minded people. It is the first Shade Burger place in Ukraine. Opening of the chain of restaurants in small Ukrainian towns is planned for the future.