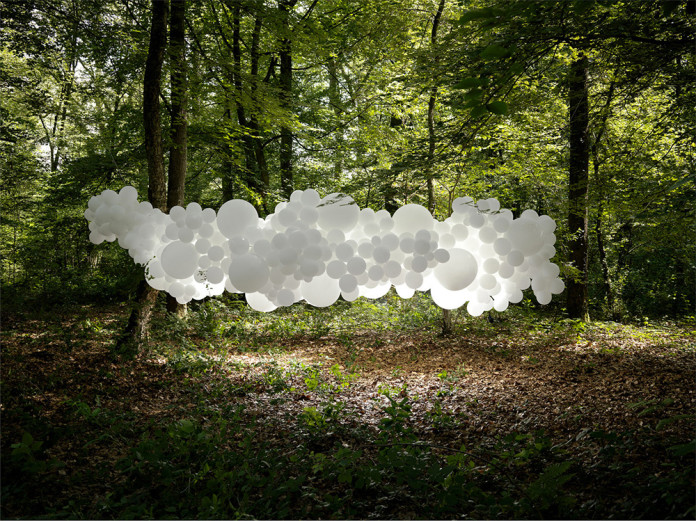 Photographer Charles Pétillon captures arranged configurations of balloons in a variety of environments—trapping the illuminated organic shapes momentarily in his photographs. The huddles of balloons are metaphors for Pétillon, a nod to the objects, buildings, and structures we often pass by in our busy lives without taking the time to really notice them. Last year he produced a 177-foot-long installation for London’s Covent Garden, a work that he titled Heartbeat.

“Each balloon has its own dimensions and yet is part of a giant but fragile composition that creates a floating cloud above the energy of the market below,” explained Pétillon about his 2015 installation. “This fragility is represented by contrasting materials and also the whiteness of the balloons that move and pulse appearing as alive and vibrant as the area itself.”

Pétillon’s words can also be applied to his current oeuvre, a selection of which is currently on display in a solo exhibition titled Invasions. The works are featured at Magda Danysz Gallery in Paris through January 14, 2017, and also includes a site-specific installation of balloons to mirror those within his photographs. You can see a behind-the-scenes shoot below, as well as more final images of his balloon series on his website and Instagram. His work is also seen in the book Public Art Now.