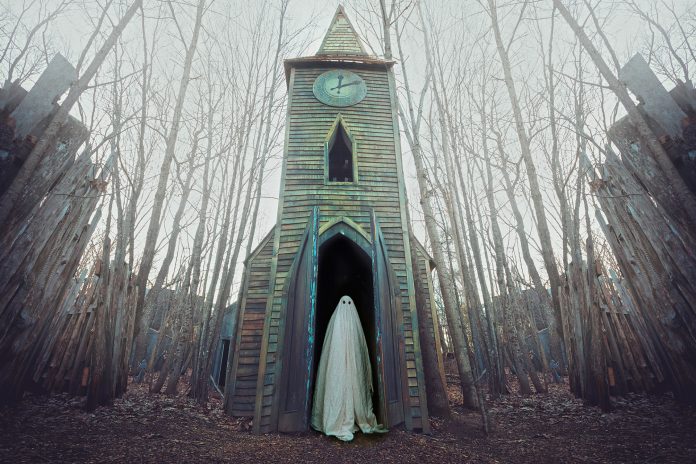 When Karen Jerzyk decided to photograph people donning ghost costumes, she was well aware of the outfit’s reputation in mainstream culture. “I know the sheet-ghost image has been used a million times before, in countless applications,” she tells Colossal, “but it was October and the timing was perfect and I always loved the simplicity and character of sheet-ghosts.”

At the time, the Boston-based artist was making a quick stop between trips to Florida and California at Yellow Dog Village, an abandoned neighborhood in Pennsylvania. Enthralled with its dilapidated homes and gravel roads, Jerzyk posed her sheet-covered model in the village, starting a new trend in her own uncanny work.

It instantly makes me think of my childhood, and there’s something magical about it—if you were a kid growing up with no resources to get or make a halloween costume (I was never that kid, but always had friends that were, and helped many make their costumes over the years), there was ALWAYS a way to be a ghost.

Since Yellow Dog, Jerzyk has brought her simple costume to rural areas around the northeast United States, creating unsettling images of a single figure posed against a gloomy, neglected backdrop. This specter-centered project is easier to create when traveling than her previous work, Jerzyk says, because anyone can become the haunting figure, including herself, although she hasn’t done that yet. “It’s a character someone can instantly be anywhere,” she says.

The artist has photographed multiple friends, who are all masked by the white sheet with cut-out eye holes. She even convinced her mother to pose in front of an abandoned home in New Hampshire in the midst of Christmas preparations. To keep up with Jerzyk’s haunting adventures, follow her on Instagram and take a look at more of her work on Behance.