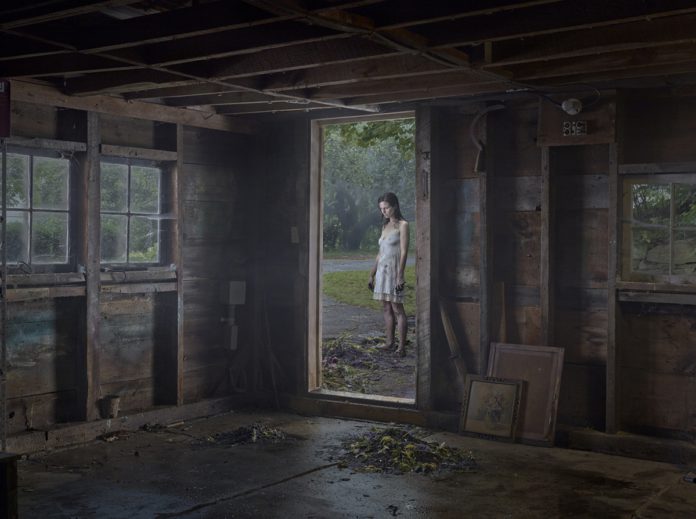 “It was deep in the forests of Becket, Massachusetts that I finally felt darkness lift, experienced a reconnection with my artistic process, and moved into a period of renewal and intense creative productivity.” These are the haunting words of acclaimed American artist Gregory Crewdson, describing his latest body of work Cathedral of the Pines.

The series – on show at The Photographers’ Gallery from 23 June until 8 October 2017 – sees Crewdson return to the uncanny suburban subjects, and explores more natural environments. In images that recall nineteenth-century American and European paintings, Crewdson photographs figures posing within the small rural town of Becket, Massachusetts, and its vast surrounding forests, including the actual trail from which the series takes its title. Interior scenes charged with ambiguous narratives probe tensions between human connection and separation, intimacy and isolation.

Crewdson describes this project as “his most personal”, venturing to retrieve in the remote setting of the forest, a reminiscence of his childhood. The images in Cathedral of the Pines, located in the dystopian landscape of the anxious American imagination, create atmospheric scenes, many featuring local residents, and for the first time in Crewdson’s work, friends and family.

In Woman at Sink, a woman pauses from her domestic chores, lost in thought. In Pickup Truck, Crewdson shows a nude couple in the flatbed of a truck in a dense forest – the woman seated, the man turned away in repose. Crewdson situates his disconsolate subjects in familiar settings, yet their cryptic actions – standing still in the snow, or nude on a riverbank – hint at invisible challenges. Precisely what these challenges are, and what fate awaits these anonymous figures, are left to our imagination.

His careful crafting of visual suspense conjures forebears such as Diane Arbus, Alfred Hitchcock, and Edward Hopper, as well as the influence of Hollywood cinema and directors such as David Lynch.

Visually alluring and often deeply disquieting, these tableaux are the result of an intricate production process: For more than twenty years, Crewdson has used the streets and interiors of small-town America as settings for photographic incarnations of the uncanny. Working with a large crew, he plans his images as meticulously as any movie director, from the nocturnal Twilight series (1998– 2002); to the cerebral Beneath the Roses (2003–08); to the black and white series Sanctuary (2009), which was the first work that Crewdson made abroad, working in the back lots of the film studio Cinecittà, in Rome.

Gregory Crewdson was born in 1962 in Brooklyn, New York, and lives and works in New York City and Massachusetts. He studied at the State University of New York and Yale University, where he is Director of Graduate studies in Photography.