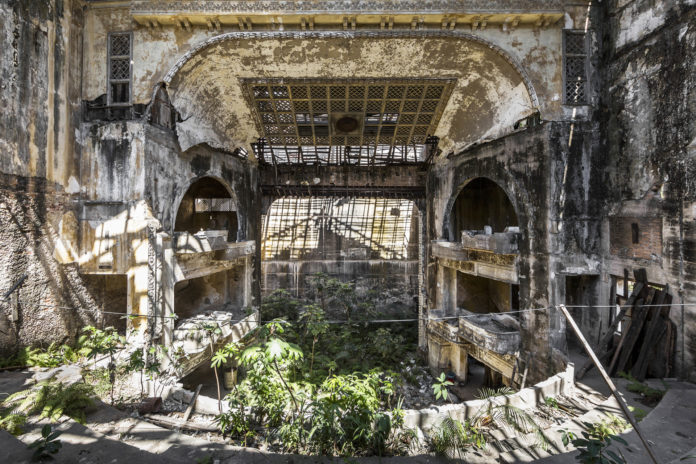 Inspired by a wildlife documentary he saw as a child, Paris-based photographer Jonk (Jonathan Jimenez) travels the world in search of man-made structures that have been abandoned and reclaimed by nature. A jungle fills a dilapidated theater in Cuba, roots snake through a mansion in Taiwan, and a wild garden sprouts in a former greenhouse in Belgium. A reflection of his ecological consciousness, Jonk’s photography shows that in the power struggle between man and nature, nature always wins.

Throughout his career, the photographer has visited more than 1,000 abandoned structures in 50 countries on four different continents. The Naturalia: Chronicle of Contemporary Ruins series has led to the publication of a hardcover photography book, and Jonk says that he is working on a second volume. The juxtaposition of weakened architecture with thriving plant life tells a full story. The images capture specific moments in time and allude to the past, but for Jonk, they hint at an inevitable future. “This series also tells the story of the progression of Nature,” he said in a statement, “from the infiltration in abandoned places, through the moment where She grows inside them, until their collapse. Burial comes next along with the disappearance of all traces of Man.”

Images from the Naturalia series are currently being exhibited at the André Planson Museum in Paris through March 1, 2020, with other exhibitions planned this year. To see more of Jonk’s urban ruin photography and to follow his travels, head over to Instagram.