Home Photo/Video This Artist Paints On His Hand To Create An Amazing Effect On... 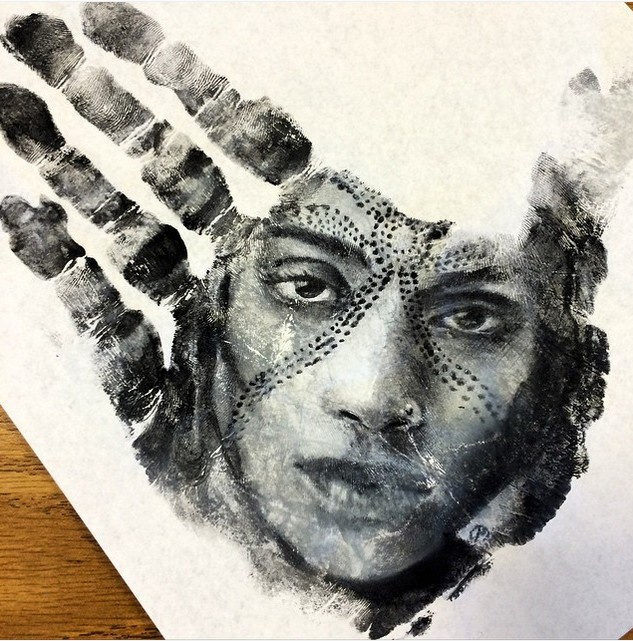 It’s rare to come across an artist who doesn’t make art with their hands. After all, that’s what human hands are there for: making things. Yet artist Russell Powell takes the concept of “handiwork” to a whole new level with his paintings, which are created right on the skin of his palm and transferred via stamping onto paper.

The paintings start out on the palm of Powell’s left hand, painted quickly so that the paint doesn’t dry.

Powell then presses his hand to paper, creating a perfect, though reversed, impression.

The natural texture of his hand adds an interesting element to the painting, but doesn’t sacrifice the quality or detail.

Surprisingly, the paint on Powell’s hand stays pretty crisp and detailed, too.

It’s also interesting to note the way that the image changes when it’s reversed. Certain details seem to pop more depending on which version you look at.

Many of Powell’s portraits are inspired by celebrities, like this one of actress Ruby Rose.

By day, Powell, who resides in California, is a teacher. He wanted to push art’s connection with the human body further, and thus developed his hand painting technique, which he’s dubbed “hand-stamping.”

The handprint not only shows Powell’s painting, but also makes evident his palm prints and fingerprints, leaving behind a unique visual signature that forever ties the painting to Powell himself.

To watch the painting and stamping in action, check out some of Powell’s videos: