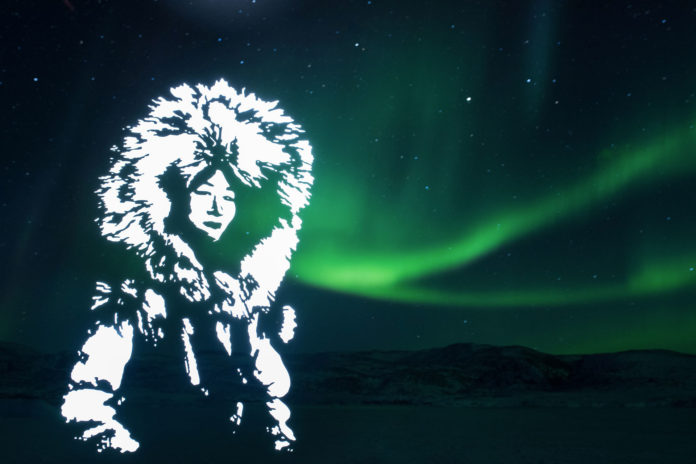 Inspired by Inuit iconography, Fabrice Wittner describes his latest series as “an invitation to enter the polar night.” The Northern Lights, a project in which the artist superimposes figures onto the Arctic phenomenon, involves painting with a light source like a torch on an extended-exposure photograph, illuminating those he depicts. Wittner combined this technique with his use of leatherette stencils, which are inspired by archived Inuit images from the early 20th century, to create his complex and layered portrayals. Committed to environmentally friendly processes, Wittner produced his low-pollution cyanotype prints using found and recycled materials, such as scraps of Dilite aluminum plates and pallet wood.

Originally from Alsace, France, the artist is interested in the ways climate change will affect native polar populations. As the sea ice melts and water levels rise, the hunting resources in the area inevitably will be affected, changing daily life for these groups of people.

The interdependency between the lifestyle evolution, global warming, the threat upon wildlife, and the consequences on the northern populations should lead us to reconsider our whole society. Inuits from Greenland and the North American continent, Sames from Northern Europe, and ethnic groups from Siberia will be on the front line of global warming. As the first climate refugees, only their memory and the spirits of their ancestors will remain on their lands.

Wittner regularly updates his Behance and Instagram, where you can find more of his ecologically conscious projects.