Home Photo/Video Tuxedoed Penguins Plunge into A Private Tour of the Nelson-Atkins Museum of... 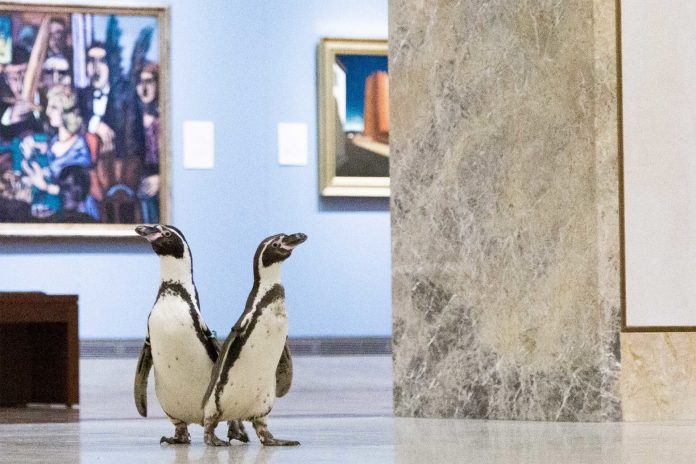 On a recent trip to the Nelson-Atkins Museum of Art, three penguins from the Kansas City Zoo were keen to ruffle some feathers. As they waddled along their private tour— the museum currently is closed to humans due to COVID-19—Bubbles, Maggie, and Berkley served some polarizing opinions. Executive director and CEO Julián Zugazagoitia said the tuxedoed guests “seemed to react much better to Caravaggio than Monet,” whose work they only glance at in a video of their trip.

Despite the cold shoulders that they gave the French painter, zoo officials said the penguins enjoyed interacting with some new faces. “Unfortunately, our penguins can’t speak for themselves, but we think they found the experience at the museum very enriching.”

Zugazagoitia also noted that he spoke Spanish to the three birds, who are native to Chile and Peru, in order to break the ice and make them feel a little bit more comfortable in the space. All three are Humboldt penguins under eight years old, meaning that they’ve got more time to refine their tastes. The South American birds generally live more than 30 years.

The museum’s resident photographer Gabe Hopkins captured much of the sophisticated guest’s visit, which he’s shared on Flickr. (via ArtNet News)