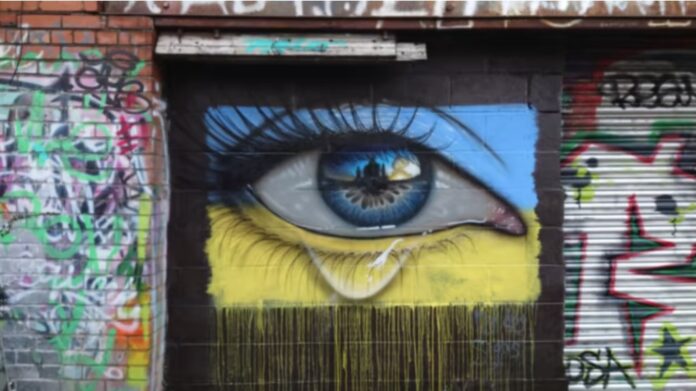 The artwork, which appears to show the city of Kyiv reflected in a person’s tearful eye, has appeared in Northcote Lane in Cathays.

It was painted by the artist ‘MyDogSighs’, who has become known for his designs showing reflections in people’s eyes.

The second piece of art, showing two hands held together in the shape of a heart in the colours of the Ukrainian flag, has also appeared in Llanelli.

MyDogSighs said: “You feel helpless when you see this happening, I do not know what I can do – I am not a politician, what I can do is paint to raise awareness.

“I, like most other people, sit in front of Twitter and the news feeling completely helpless – I throw paint at walls, so if I can show some support to those in Ukraine and show the feelings people are having here, then that is my little contribution.

“I can’t pick up arms, I do not have influence apart from using my art to make people stop and think, which is what art is for.”

Posting on Instagram, he wrote: “We’ve all sat and watched this hideous situation unfurl and while it’s not much, I wanted to do what I know best, (throwing paint) to highlight my sadness and anger over the Ukrainian invasion by Russia.

“I used two images to create the silhouette, the first, the beautiful place in the centre of Kyiv and the second a powerful photo that came up on my Twitter feed.

“The tear speaks for itself. A horrid, horrid situation.”

Crucial talks between Ukraine and Russia are underway on the border with Belarus in the hopes of bringing an end to fighting as Moscow’s invasion enters its fifth day.

Ukrainian President Volodymyr Zelenskyy’s office said it would demand an immediate cease-fire, but it was not immediately clear what President Vladimir Putin was seeking in the talks.

While Ukraine sent its defence minister and other top officials by helicopter to the meeting arranged “without precondition”, the Russian delegation is led by Putin’s adviser on culture – an unlikely envoy for ending the war and a sign of how Moscow views the talks.