Home News A man discovered an architectural treasure of the XIV century in his... 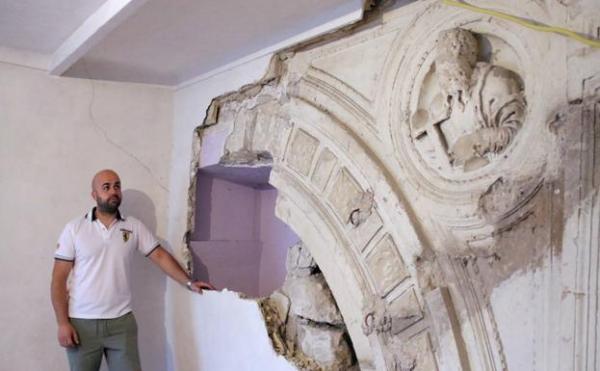 Repair is always a difficult and time-consuming process, during which a lot of details and surprises can open up. One of these surprises just happened to a resident of the Spanish city of Ubeda.

Juan Francisco decided to make an overhaul of his house. But the work on the reconstruction of housing did not last long, because, behind the wall, which was safely demolished by Juan, he found a bas-relief of the Renaissance. Juan immediately informed the city administration about his discovery. Needless to say, due to the unexpectedly found property, the house repair had to be suspended.

A Renaissance bas-relief that Juan found behind the wall in his house.

The experts found out the bas-relief belonging. It turned out that behind the wall of the house for centuries hid the facade of St. George’s Hospital, which was built back in the XIV century!

It also turned out that the work belongs to the master Andres de Vandelvir. The architect made a significant contribution to the development and arrangement of the cities of Ubeda and Baez. Therefore, the facade, found in the house of Juan, was included in the UNESCO World Heritage List.

According to Spain’s law on historical heritage, Juan expected a monetary reward from the state, which is half of the amount in which the bas-relief will be evaluated. However, the man had to go to court to obtain the proper reward.

Four years after the discovery, this summer, Juan won the case! Once the bas-relief he found is evaluated, the man can receive a compensation of 50% of its value. This means that all the deprivations and inconveniences that accompanied Juan and his family while working on the bas-relief in his home were not in vain!

We are sure that the amount received will be enough to complete the renovation of the house, and maybe even to buy new apartments. Still, the repair is a useful thing in every sense!