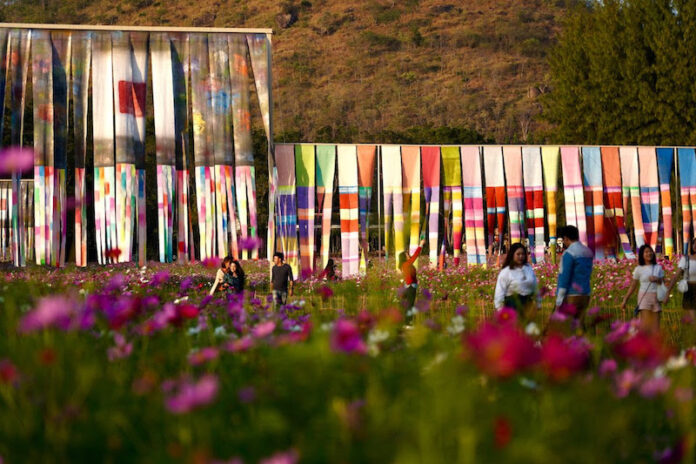 The Aichi Triennale 2022 announced the full list of participating artists/groups, Performing Arts Program, and Learning Program for its fifth edition. Led by the Artistic Director Kataoka Mami (Director, Mori Art Museum / President, CIMAM), the Aichi Triennale 2022 starts from July 30, 2022, and goes on till October 10, 2022, offering five programs: Contemporary Art, Performing Arts, Learning, Collaborative Programs, and Online Initiatives. The title as well as its theme “STILL ALIVE” was inspired by the artwork series I Am Still Alive by the Aichi-born conceptual artist On Kawara.

In addition to the 77 artists/groups that have been already announced, five artists/groups are newly added to complete the full list of artists participating in the Contemporary Art program. They are Laurie Anderson & Huang Hsin-Chien, Anne Imhof, Nawa (Aichi Kengei Team initiated by Nara Yoshitomo), Shwe Wutt Hmon in collaboration with Kyi Kyi Thar, and Diemut Strebe. A total of 82 artists/groups hail from 32 countries/regions spread across the five continents: Asia Pacific, Europe, North America, South America, and Africa. More than half of the overseas artists will exhibit their works for the first time in Japan.

The Performing Arts Program of Aichi Triennale 2022 features drama, music, and dance through the context of contemporary art and aims to create a cross-disciplinary program that is open to experimentation as a tribute to the history of performance art. The programs are characterized by the following three goals: reclaiming the present by reenacting historical performances; expanding the possibilities of the performing arts using VR (virtual reality) and other new technologies; and opening up questions about life and care following the COVID-19 pandemic. To achieve these goals, 11 artists/groups are selected: Adachi Tomomi, Back to Back Theatre, John Cage, Trajal Harrell, Imai Chikage, Momose Aya, Rabih Mroué, Nakamura Yo, Steve Reich, Shiomi Mieko and Apichatpong Weerasethakul. Besides them, artists from the Contemporary Art program, such as Theaster Gates, Mukai Eriko, Prinz Gholam, and Sasamoto Aki are also putting on performances, and Laurie Anderson & Huang Hsin-Chien, ARAKAWA and Madeline Gins, and Hsu Chia-Wei are planning to show the works incorporating VR experiences at the contemporary art exhibition section to envision the cross-disciplinary perspective for the Aichi Triennale 2022.

The Aichi Triennale 2022 Learning Program is based on the fundamental concept that “art is not just for a few knowledgeable enthusiasts, but for everyone to enjoy and appreciate in their own way.” We believe that people who come to see or participate in art festivals can and should feel that they are doing so as members of the community, and feel they are part of society’s spaces and narratives. Since the fall of 2021, seven artists/groups, Åbäke & LPPL, AHA! (Archive for Human Activities), Inoue Yui, Majima Tatsuo, Shōjō Collective, Tokushige Michiro, and Ura Ayaka & Koyama Yuya together with participants invited from the general public, initiated a series of free-format research projects, notably fieldwork and workshops. These research projects on “Aichi,” home to the Triennale, will focus on understanding where we are located in order to engage with the worldʼs diversity of expression from historical, cultural, and sociological perspectives. During Aichi Triennale 2022, these projectsʼ results will be exhibited and further developed over a series of workshops and other activities.

Participating Artists of Performing Arts program
Artist names [Place of Birth | Activity] and their programs for Aichi Triennale 2022 are as follows. The list is in the order in which the performances will be presented. The schedule and details are to be announced shortly.

Steve Reich [USA | USA]
Focusing on Double Sextet and Different Trains, Aichi Triennale 2022 will shine a new light on Reichʼs masterpieces, whose deep connections reach from ancient medieval music to visual and conceptual art of the present. The concert, performed by an ensemble of talented musicians who revere Reichʼs work, will offer the audience a perfect experience of Reichʼs musicality and contempoarity.

Trajal Harrell [ – | Greece/Switzerland/USA]
One of Harrellʼs most significant inspirations is Hijikata Tatsumi (1928‒1986), the founder of Butoh dance. Harrellʼs continuous research and re-interpretations of Butoh since 2013 have now flourished into his latest piece Sister or He Buried the Body (2022), which will allow audiences to witness the special moment when Harrell channels a voguing Hijikata Tatsumi through his body and gestures. Further, Harrell will also perform his 2019 piece Dancer of the Year, making his participation in Aichi Triennale 2022 a double bill.

Back to Back Theatre [Australia | Australia]
At Aichi Triennale 2022, the company presents their films Oddlands and Shadow (performed with Japanese subtitles), two stories about unlikely heroes who find hope in the most unlikely places. A post-performance discussion with writer and director Bruce Gladwin is also scheduled to take place.

John Cage [USA | USA]
At Aichi Triennale 2022, John Cageʼs Europeras 3 & 4 will be performed for the first time in Japan under the direction of Adachi Tomomi. The Europera series, created in Cageʼs final years, is one of the artistʼs masterpieces created through chance operations, with the elements of the opera (songs, piano, gramophones, sound, lighting etc.) determined by randomly-generated directions. The cast of opera singers will be joined by two Noh actors for the performance at Aichi Triennale 2022.

Nakamura Yo [Japan | Japan]
Her piece GISELLE, which will be performed at Aichi Triennale 2022, is an ambitious attempt to adapt one of the masterpieces of classical ballet into a piece about a woman living in the world of today.

Imai Chikage [Japan | Japan]
At Aichi Triennale 2022, Imai presents a stage piece formed from five of her compositions, including Transcendent – mirror, which tries to bring life to Noh masks (said to be dead unless worn by a performer) through contemporary music, photographs and visual art. What will happen when a contemporary artist confronts the works of Noh mask masters from 400 years ago.

Apichatpong Weerasethakul [Thailand | Thailand]
For Aichi Triennale 2022, Weerasethakul engages in his first VR performance through an international collaboration with Japanese creators. How will the technology of virtual reality affect the vision of his works, whose worlds of sleeping and sick bodies, their sympathy with ghost-like presences and their sense of suspended time seem to have presaged our post-pandemic age? We hope you look forward to diving into this new space of interactive lightwaves and sounds contributed by Japanese composer Sakamoto Ryuichi.

Momose Aya [Japan | Japan]
In addition to her video installation Jokanaan at the Contemporary Art program, which has recently been added to the collection of the Aichi Prefectural Museum of Art, Momose will also present a new work as part of Aichi Triennale 2022ʼs Performing Arts program. With physical contact having become quasi-taboo, Momose stages a therapy performance that unearths the roots of desire and overcomes the artificial divisions erected by our modern worldview, such as caregiver/care-receiver, healer/patient and healthy/disabled.

Rabih Mroué [Lebanon | Germany]
In response to Aichi Triennale 2022ʼs theme “STILL ALIVE,” Mroué performs an updated version of his 17-year old masterpiece Who’s Afraid of Representation? (2005), a dissection of the history of performance art. Summoning self-mutilating actions from the body art movement that flourished in the 1960s and ʻ70s side-by-side on stage with actual murder cases that took place in Beirut, Mroué offers opposition against art histories and conceptualizations based on exclusively Western perspectives.

Participating Artists of Learning Program – Research project
Artist’s names and project titles are as follows. It is listed in alphabetical order according to their family names.

Åbäke & LPPL “Fugu Gakko (School)”
Founded in 2000 by Patrick Lacey, Benjamin Reichen, Kaisa Stoll, and Maki Suzuki, members of the Åbäke Collective were primarily working in the realms of art, design, architecture, music and dance, and has over time expanded its practice to embrace sculpture, performance, exhibition production, writing, performance, and workshops. During the Aichi Triennale 2022, the Collective will develop the Fugu School (2018) specifically adapted for Aichi, which originally took place in Istanbul after a blowfish (fugu in Japanese) was mysteriously discovered off the Turkish coast in 2003. The workshop proposes to explore and learn more about environmental issues, geopolitics, anthropology, and contemporary art, using the blowfish as a springboard for any questions.

AHA! (Archive for Human Activities) “Dashboard Camera” (working title)
AHA! is an organization that has been working on establishing an archive devoted to individual citizenʼs records and memories of ordinary people. Focusing on the “voluntary” return of driverʼs licenses, a system that has garnered much attention over recent years, this project will reconsider our relationship with the automobile in modern society. It will take into consideration the experiences of those who have reached a point where they must decide about giving up their licenses, as well as the impact on their families.

Inoue Yui “Project for Exploring Honokuni ”(working title)
Thanks to fieldwork throughout Honokuni‒‒ a region where since ancient times East and West have actively exchanged goods, culture, and information, via the sea, rivers, and overland transportation‒‒ this project will collect and tap into local resources (knowledge, techniques, materials, folk tales, patterns ), in order to create new “trading goods” that embrace local narratives. By opening up such a “marketplace,” this project will develop fresh approaches to migration and trade and reinvisage the state of the world.

Majima Tatsuo “The Whole of Aichi featuring Three Heroes”
Focusing on three historic heroic warlords and military commanders from Aichi Prefecture, namely, Oda Nobunaga (1534-1582), Toyotomi Hideyoshi (1537-1598), and Tokugawa Ieyasu (1543-1616), who are all credited with unifying medieval Japan, this project will set out to create a mural. During the preparatory phase, we will meet with researchers, undertake field trips, think and work together, and put our hands to work.

Shōjō Collective “Clan Research”
Led by full-time artist Yamamoto Takayuki, who will also be involved with Aichi Triennale 2022 as a learning curator, the Shōjō Collective has initiated a project focusing on Shōjō, lifesize dolls that can be seen at festivals in the southern part of Aichi Prefecture. In addition to planning events during the festival period, the Collective is also developing a series of programs, including research and production of the Shōjō. In collaboration with the Aichi Childrenʼs Center, workshops were held at children’s centres across the prefecture to make Shōjō.

Tokushige Michiro “Slipping through Landscapes.”
Focusing on landscapes that serve as an indicator for our identity, this project will explore those landscapes that emerge whenever we examine events that we would usually overlook, notably in localities where numerous foreign residents, including migrant workers, live.

Ura Ayaka and Koyama Yuya “Measure it by Yourself, Get in Between, Break Out”
This program is designed for teenagers and the twenty-somethings who visit art exhibitions, and view artworks and their contexts, and who seek to express themselves artistically as a way for thinking for themselves. They will learn to ask: what is society and how does it relate to them? They will learn how to “do their own thing,” by observing and presenting artworks in urban settings and in museums, evaluating relationships, and observing how they fit into those relationships. During the Triennale, participants will organize and hold workshops.