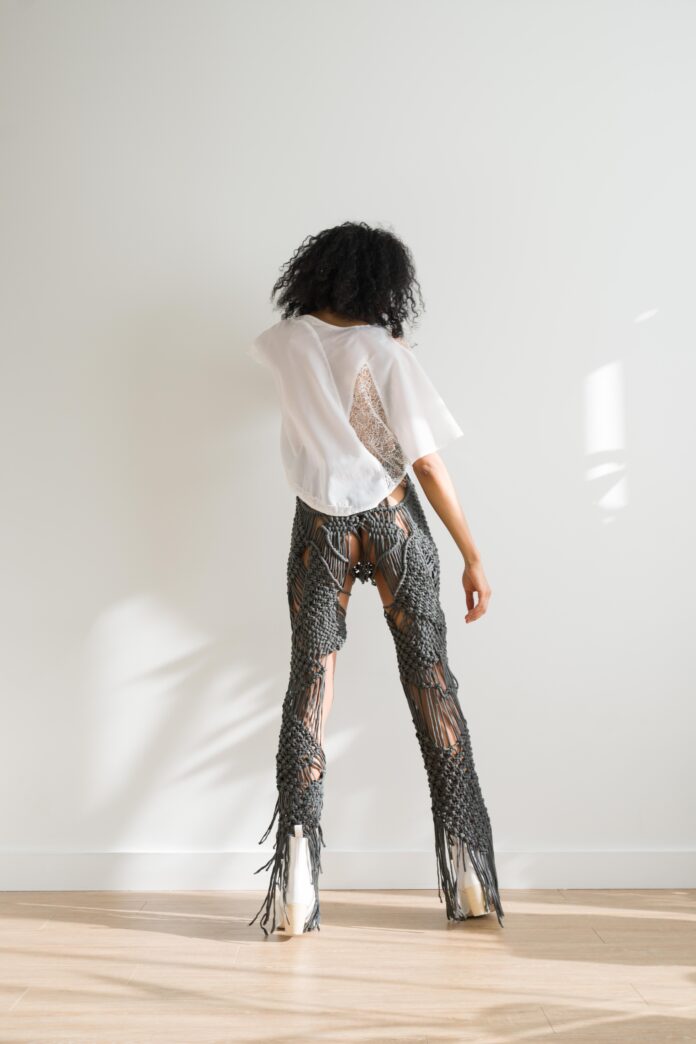 Talented fashion designer, Tianqi Chen, launched her latest collection, The Woman Warrior, a unique collection based on Macrame as she highlights the resilience of womanhood

Tianqi Chen is again bringing her creativity and ingenuity to bear. The talented fashion designer recently launched The Woman Warrior, a collection that portrays the beauty of women’s strength through fighting emotional struggles. The collection is constituted with Macramé and drawstring. Purposefully employing hard and soft materials of the drawstring, the piece represents the coexistence between vulnerability and strength. Through the gathering enabled by the drawstrings, Tianqi creates a distance between the piece and the body to represent the contained emotions, while the Macrame, making it armour-like, shows the ultimate power and resilience of women.

“This processing of Macrame is a conversation with the audience. It is to show the healing story of those who are searching for peace.” Tianqi further elaborated, “The intertwined lines form triangles and rhombi, which symbolize the firmness and resistance behind the seeming gentleness of women. The negative space of lines and shapes invites the audience to navigate a symbolic space of the relief-searching journey. All the dense and sparse places are also a manifestation of this oppositional relationship. In the words of my friend, it is ‘softness against strength’”.

Raised in China during the 90s, Tianqi received her college education at a women’s institute in the States where she embarked on a self-identifying journey through experiencing cultural conflicts, while majoring in Fashion Design. Tianqi took a detour and worked as an editor for two years before she refocused on fashion and joined the Parsons School of Design MFA program, during which she experimented with Macramé and crochet that led her to the knitwear internship opportunity at Thom Brown and contractor jobs after graduation.

In this new collection The Woman Warrior, Tianqi was inspired by the anxiety around body images that many people might have experienced. She uses the functionality of drawstring to create a transformational system that allows audiences to alter not only the fit but the appearance of garments. Hence, Tianqi’s design can be worn by different ages, sizes, heights, and genders. Through adaptability and inclusivity in these designs, Tianqi attempts to bring awareness to women who are going through or have been through the path of relief-finding, to rebuild their confidence and challenge body ideals and gender norms.

The limited patternmaking, factory production, and model fitting resources during COVID19 also shaped the process of Tianqi’s collection. All cording materials used in this collection were dead stock donations. Tianqi used natural dye to modify the shade of materials and was inspired to hand knot all looks directly onto bodies to reduce waste. All cording could be disassembled to recreate new pieces.

“I did not realize that I’m the kind of designer who works with my hands until the pandemic. Without a ‘traditional’ studio setting, I had to rethink my design and production approach. Knotting directly onto bodies was simply a solution for not having a sewing machine and pattern table at the beginning…But during this process, I developed a new way of seeing and storytelling. As my eyes traveled with the cording, my hands knotted them together with the histories and entanglements from different individual encounters in mind. I realized that the individual and collective memory of womanhood is embodied in these pieces.” Tianqi explained.

Tianqi is moving to the west coast this year, and excited to take on new challenges throughout her journey in life and design.

Munich’s Art Scene Is in the Midst of a Renaissance—Here Are...

Archaeologists Are Uniting to Demand the British Museum Return the Rosetta...