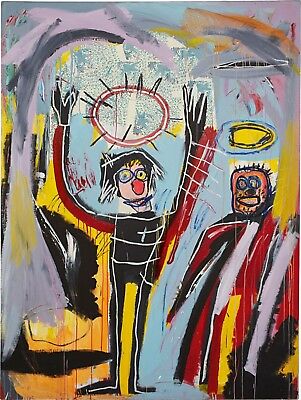 A former electrician who couldn’t prove that Pablo Picasso’s works were presented to him by the author; a painting by Jean-Michel Basquiat, which became “a straw that broke the back of a camel”; a collection worth 300 million euros, which bled away in the expanses of China… All these three events have one thing in common: they were the focus of the art world last week.

Electrician Picasso
A longstanding lawsuit against electrician Pablo Picasso seems to have come to an end. The Court of Appeal in France upheld the previous verdict: Pierre Le Gennec and his wife Danielle to two years’ suspended imprisonment. The case began in 2010 when Le Gennec tried to authenticate some of Picasso’s works hidden in his garage. He eventually found 271 works – drawings, lithographs and extremely rare cubist collages dating from around 1900 to 1930. Pierre Le Gennec and his wife. Photo: Boris Horvat / AFP
At first, Le Gennek stated that he installed the alarm system in several Picasso houses and received the works as a gift. The fact that they were all unsigned raised concerns among the administration managing the artist’s legacy. His son Claude Ruiz Picasso said that his father never gave away undated and unsigned works. But on appeal, Le Gennec said that Picasso’s wife, Jacqueline, hid bags of her husband’s work in his house and then let herself be left alone in gratitude for the service.

For the first time, the court found Le Gennek guilty of stealing for 100 million euros in 2015. He was then sentenced to two years’ suspended imprisonment, and the higher court upheld the verdict. However, three years later, the Supreme Court of France overturned the verdict and ordered a retrial. The latter decision meant that Le Gennek would not face imprisonment if he followed the court’s requirements.

“Rawness” of Basquiat
And the British court ordered a worldwide freeze on the assets of gallery owner and art dealer Inigo Philbrick. The lawsuits filed against him are “worth” tens of millions of dollars: he allegedly sold or lent out works for which he had no right of ownership or sale. The most recent lawsuit concerns the painting by Jean-Michel Basquiat “Rawness” (1982), depicting two figures crowned with halos. Filbrick is accused of misleading a company owned by collector Alexander Pesko. She paid $ 12.2 million to buy a share of the painting. Since then the full price was announced at 18.4 million, the company received 66% of the painting. But now the company has raised a scandal, claiming that the real price of the work – 12.5 million dollars, which means the share of the firm is 97%, that is, the work belongs to her almost entirely.

“Raw Material” is now wanted: the plaintiff demanded to determine its location and the transactions carried out with it. Previously, the painting was exhibited at the Maury Art Museum in Tokyo, where November 17 closed the exhibition “Jean-Michel Basquiat. Made in Japan”. Inigo Philbrick. Photo: Patrick McMullan
Inigo Philbrick comes from a family known in the art world and started his career in London’s White Cube Gallery. He used to run galleries in Miami and London, but both have recently closed. Investment companies from Singapore and Germany have also filed lawsuits against the gallery owner. They include, among others, works by Donald Judd and Yaya Kusama.
The vanished collection
It is reported that a collection of art worth 300 million euros has disappeared in China. The 342 missing works by Anselm Kiefer, Renate Graf and Marcus Lupertz belong to Maria Cheng-Tu, a German collector of Taiwanese origin.
The works were leased to Ma Yue, a Chinese businessman who promised to organize exhibitions in Chinese museums. He stated that he was also commissioned to sell the collection. However, his Hamburg-based company, Bell Art, started bankruptcy proceedings in January. Chen-Thu said she had repeatedly asked for the collection back, and in July approached the Beijing authorities.

“I asked for all the works in China to be returned to my company in Hong Kong. He did not comply with my request and ignored the deadline,” the German press quoted the collector as saying. Among the missing works are many early works by Lupertz, a giant of post-war German art. The artist himself said at a press conference in Beijing: “The main problem is that we do not know where the works are, where they are kept and whether they receive the necessary protection and care”. In 2017, the works of Anselm Kiefer, owned by Chen-Tu, were exhibited at the Beijing Museum of the Central Academy of Arts. They became the subject of an international dispute after the sculptor and his agents publicly criticized the show (organized by the same company Bell Art) for the items being selected without the artist’s participation or approbation.