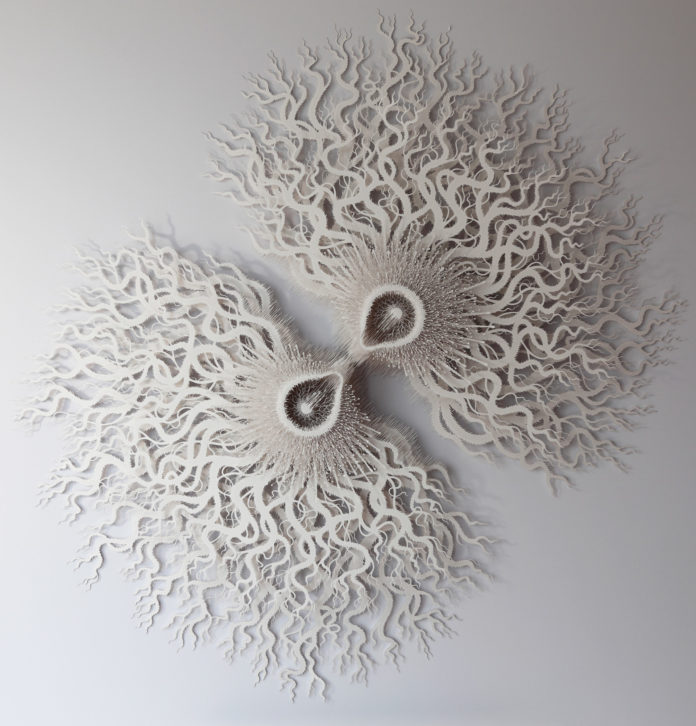 Paper artist Rogan Brown uses an accessible, universally recognized material to convey complex and minuscule biological processes. Two of his most recent sculptural works, Cytokinesis Variations, showcase cell division, also known as mitosis. “At any given moment millions of cells in your body are dividing and multiplying in order to replenish and maintain your skin, hair, intestine and bodily organs, etc. Cytokinesis is the final and most dramatic stage of mitosis when the cell wall ruptures and splits in two to form identical daughter cells. I have tried to freeze the ultimate moment of transformation and becoming,” Brown tells Colossal.

The large-scale sibling sculptures, each reaching 47 inches long, are created using hand- and laser-cut white paper paper carefully arranged in layers to convey the dramatic energy of mitosis. “Paper, my chosen material, embodies the paradoxical qualities that we see in nature: its fragility and durability, its strength and delicacy,” Brown explains in an artist statement. “There is a pleasing poetic symmetry in taking this material that was cut from the forest and by cutting and transforming it once again returning it to its origins.”

Cytokinesis Variations will be on display as part of an exhibition and sale on the history of science, natural history, and technology, at Sotheby’s running December 11-17, 2019. Brown’s work is also part of a new permanent exhibition at the Wellcome Collection in London, which opened September 5, 2019. The artist tells Colossal that he is currently working on a coral themed piece called Reef Goddess which scales 10 feet in length and is based around a silhouette of the entire human body. Keep up with Brown’s science-inspired artwork on Instagram and Facebook. Experts have discovered a new work by Rubens under a layer...

“Beach in Agrigento” by Nicolas de Stael will be the top...

A couple of wedding portraits were reunited in Mauritshuis 125 years...