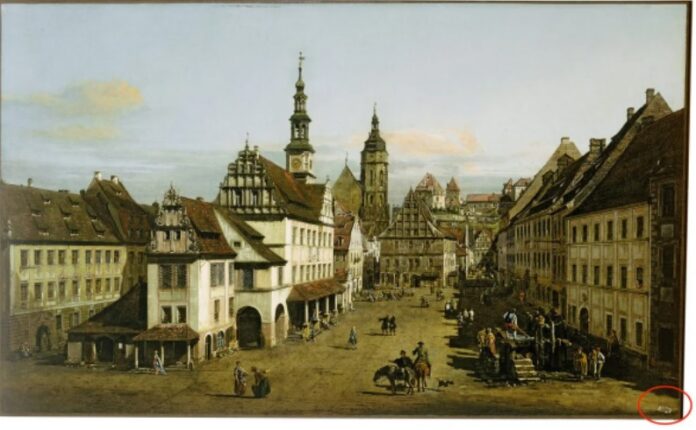 A federal judge has ruled in favor of the Museum of Fine Arts, Houston, allowing the Texas institution to keep an 18th-century painting that was being contested in a suit by the heirs of its original German Jewish owner.

The work in question, Marketplace at Pirna (ca. 1764) by Italian painter Bernardo Bellotto, was once owned by the German department store magnate Max J. Emden, who lost much of his wealth amid Nazi persecution.

In attempting to recover the canvas, Emden’s heirs claimed it was sold under duress in 1938 to an art dealer who regularly collaborated with Nazis. In an alleged mix-up, after World War II, the Bellotto painting was returned to the wrong owner by the Dutch government. In the 1950s, it was sold to Samuel H. Kress, who was a leading collector of European art, who then gifted it to the Texas museum through his eponymous foundation in 1961.

In a ruling issued on May 2, Keith P. Ellison, a judge for the U.S. District Court for the Southern District of Texas, Houston Division, ruled that the Dutch restitution was “a sovereign act” and that the decision to dismiss the case was based on the district court’s inability to determine the “invalidity” of “proceedings” related to a “foreign nation.”

The decision is based on a legal statute known as the Act of State doctrine, a rule that halts U.S. courts in many cases from overturning foreign legal proceedings. To support his decision, the judge cited a 2018 ruling made in favor of the Norton Simon Museum of Art in Pasadena involving the Dutch government’s sale of a pair of Nazi-looted paintings by Lucas Cranach the Elder that found the sale was legitimate.

Ellison’s ruling, however, did not include a decision about the painting’s rightful owner.

The MFA Houston has maintained that the painting was not sold to the German government under duress but was sold by Emden “voluntarily.”

The Bellotto painting’s complicated history has been at the center of the long-running dispute between the museum and Emden’s heirs. The heirs first contacted the museum in 2007 to try to recover the work. They made an official claim for its recovery in 2011.

In March 2021, the heirs enlisted the Monuments Men Foundation, a nonprofit that oversees restitution cases related to World War II, to conduct further research on the painting. With evidence that officially linked the painting to Emden and its return to the wrong owner, based on a Munich Checkpoint inventory number recording works restituted after the war, his heirs pursued legal action earlier this year.

The museum subsequently acknowledged the foundation’s verification of the checkpoint number and corrected their provenance record of the work last year to account for the work’s filtering through the Munich Checkpoint. (The online record for the work does not currently mention Emden in the painting’s provenance.)

Emden fled to Switzerland in 1933 and became a citizen there a year later, residing with his art collection on the Brissago Islands in Lake Maggiore until his death in 1940. According to the Monuments Men Foundation, records indicate that Emden sold the work to German dealer Karl Haberstock in 1938, and it was destined for Adolf Hitler’s planned museum in Linz.

Two versions of Marketplace at Pirna went to the Munich Checkpoint in 1944, and this one, according to the MFA Houston’s website, was restituted to the Dutch government in 1946, which in turn restituted to Hugo Moser of Amsterdam and New York. Moser then sold it to Kress in 1952.

“The judge’s decision affirms our good title,” the MFA Houston said in a statement, adding that it has “extensive documentation that in 1938 Dr. Max Emden, a Swiss citizen and resident, initiated the voluntary sale.”

In a statement, a representative for the Monuments Foundation criticized both the ruling and the MFA Houston: “Regardless of any court ruling, a painting once owned by a German Jew, stripped of his assets by the Nazis, now hangs in one of our nation’s wealthiest museums because of a 1946 clerical error and a 1951 fraud,” referring to the heirs’ claim that Moser did not have the legal title to sell the piece to Kress.