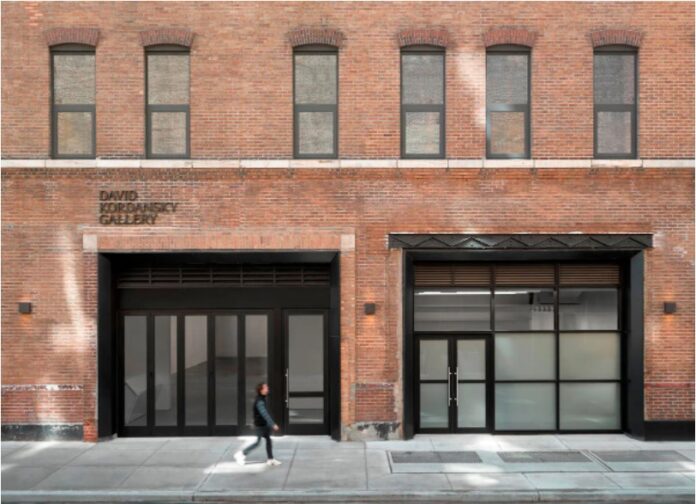 Even though the city has long nurtured generations of pioneering artists, much has been written about how Los Angeles has finally arrived in recent months amid the arrival of major enterprises, including Lisson and David Zwirner. But the reverse happened this week in New York when the L.A.-based David Kordansky Gallery opened a 5,000-square-foot branch in Chelsea.

As part of New York Art Week, the gallery finally opened its doors on Friday with a spectacular solo show by L.A.-based artist Lauren Halsey. Featured are a suite of new sculptures, an installation piece, and wall-hung works, including one that incorporates an intricate working fountain.

In an interview in his New York office conducted ahead of the gallery’s official opening, dealer David Kordansky described Halsey’s work as “mining her own geography, her own place, her own space,” one that is specific to being an L.A. artist. That spirit is shared by the overwhelming majority of artists on Kordansky’s roster and is part of what he plans to offer in New York.

“For whatever reason, I think artists who have come out of L.A. are fascinated with Los Angeles,” he said, noting those themes in the work of artists he represents like Jonas Wood, Kathryn Andrews, Raul Guerrero, Mary Weatherford, and Larry Johnson. “It’s through L.A. art that I’ve become part of a wider international community.”

Kordansky, who first opened his L.A. gallery nearly 20 years ago, arrived in New York on April 16 “to be present and involved in all of the details of the finishing the space, and most importantly to be present for Lauren for when she began her installation.” He was also in town in March to celebrate gallery artist Shara Hughes’s new painting going on view at the Flag Art Foundation as part of the organization’s new “Spotlight” series.

The gallery signed its lease on the new space last June. Kordansky soon got to work with Kulapat Yantrasast of wHY Architects, who designed the gallery’s L.A. campus, to shape the raw space in New York. “This architecture is mirroring the space in Los Angeles,” he said. “It’s important that we carry the atmosphere in every way, shape, and form into New York.”

When he started out in a modest space on Bernard Street in L.A.’s Chinatown neighborhood at 24, Kordansky, who was raised in Connecticut before heading West to attend CalArts, said a New York space “was always part of the dream.” He described the realization of that goal as an intensely “emotional” experience.

He added, “One of the grand beauties has been the ability to grow with our artists. I think New York is another form in which to stay connected. I want to utilize the space as a means to give back to these extraordinary individuals that I’m grateful to be in service of.”

That’s been key to the gallery’s success he said, putting the artists first as a way “to be a part of making their visions and their realities come true is what gives my life meaning,” he said, citing the final lyric of the Grateful Dead Song “Help on the Way”: “Without love in the dream it’ll never come true.”

On the gallery’s future, Kordansky offered that the new space is “certainly more ambitious in scope. For me, vision is a holistic notion. It’s how the gallery functions both inside and outside, on a macro and micro level. We’re just doing our thing. We’re trying to produce a model that perhaps does not pre-exist. We’re trying to do something that’s idiosyncratic. We are showing blue-chip artists alongside someone like William E. Jones, who wrote a book on the history of queer pornography for Semiotext(e).”

This new space marks further growth of one of the country’s leading galleries, with more on the horizon. The gallery has come to solidify a secondary market department and one focused on consistently producing catalogues for the gallery’s shows and publications on its artists. Over the past 15 months, it’s also added several closely watched artists—Derek Fordjour, Lucy Bull, Raul Guerrero, Hilary Pecis, and Guan Xiao—and there is more news still to come, according to Kordansky.

He added, “I can’t sit still. It’s this desire to never want to feel fixed but rather fluid.”