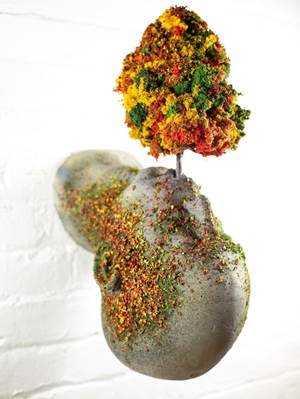 Next month, New York City-based artist Sam Tufnell returns to the Spring/Break Art Show with his new series, aptly titled ‘Self Portrait as a Flat Earther’. This is his third exhibition with the fair in New York City after his successful 2021 video installation ‘Chicken Soup is Not Good for Your Soul’ was exhibited by 5 Myles Gallery Brooklyn and then in Los Angeles with IV Gallery.

This year, Tufnell has created a series of life castings of his own head, which he has then fashioned into miniature nature scenes perfectly fitting for the fair’s Naked Lunch theme. Some of the heads float on pristine blue waters in an aquarium, eerily reminiscent of Damien Hirst’s formaldehyde tanks, whereas others hang on walls similar to hunting trophies. The portraits are both idyllic as well as dystopian and are titled after various historical fictions such as ‘Self Portrait as the Island of California’ (a well-known 16th century cartographic misnomer that explorers persisted the state to be a separate land mass from North America).

In addition to the sculptures themselves, Tufnell has also created a series of digital prints and video works of the art in various digital environments where the portraits float amongst puffy clouds and turquoise waters.

Tufnell sees the self portraits as the ultimate distortion of reality as so much of what we know we assume from other people. If we take a grand view of the human experience; the world has been flat for far longer than it has been round as it’s only been several hundred years since the discovery of science.

Artist  William Nelson is known for his paintings that assemble unlikely pairs, or groups of figures – such as Hollywood film icons and nostalgic comic book environments – that would not normally be considered in the same frame.

Each entity within the painting reveals a partial narrative. The nature of a comic and the personas of the movie stars, presented in the ethos of the Hollywood studio system, act as blank canvases for us to project our personal experience, principles, and standards of behavior.

In his newest series, Nelson ditches the comic book environments for iconic New York City locations to recreate the synopsis of notable movies. Each painting in the series poses a question; the viewer is invited to enter the intersection between the figures to interpret, and reinterpret, the subject of the painting, to explore the link between the figures. Sometimes what’s going on is intense, however, the playful expression of the paintings empowers further examination of challenging subjects.

Currently, Nelson’s works are on view at Cavalier Galleries. The gallery will host an exhibition of William’s newest works on Thursday, September 29 from 6:00 p.m. – 8:00 p.m. in their New York City location.

‘Like being on display in a zoo’: judges rule in favour...

The U.K. Supreme Court Has Ruled That a Tate Modern Viewing...