Home Art The Most Mind-Bending Optical Illusions In Art 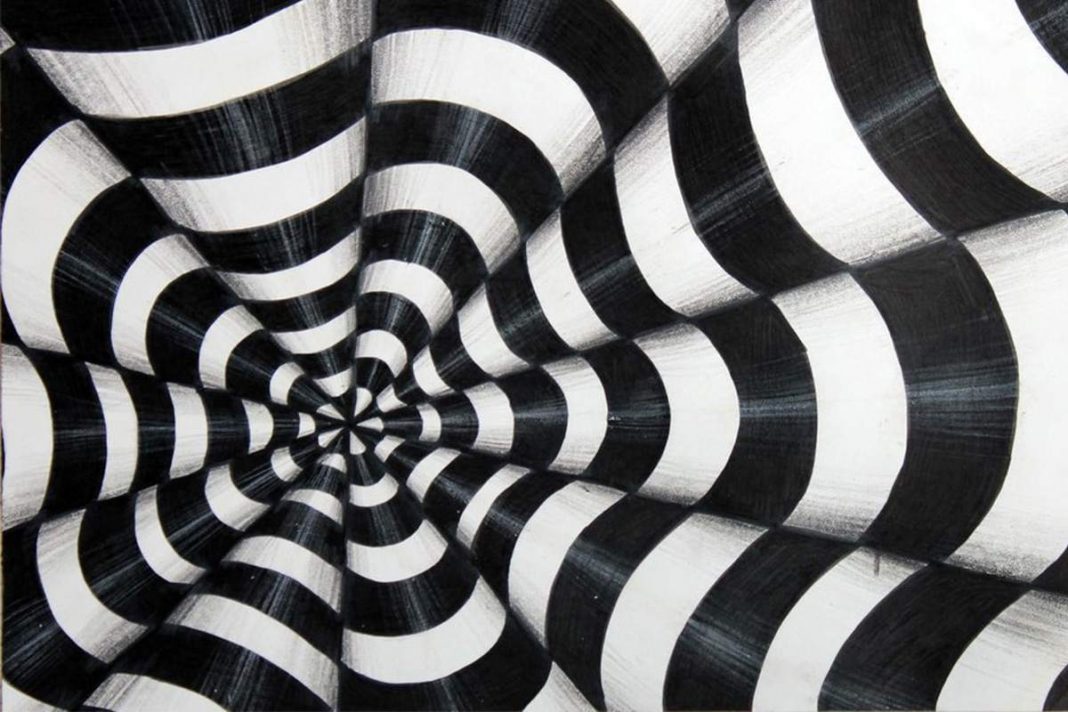 We will talk about artists who try reality out, play with us, and make us think about what we really see. Gilbert Keith Chesterton argued: life is free as air; art must be believable. Not all artists share his opinion. In the wide field between realism and surrealism, they find space for art that balances on the edge.

The effect of optical illusions is known to people from ancient times. They were used in painting, architecture, graphics to achieve the desired perception and “outwit” the vision. There are many works of art in the world where masters used visual deception. Many people do not even know about it. Let’s talk about the most famous objects.

Optical art or Op-art – a direction in the artistic painting of the second half of the 20th century, the distinctive features of which were optical illusions caused by a distorted perception of forms and figures located in space.

The current is a logical continuation of one of the trends of modernism, technicalism. The founder is considered to be the French artist Victor Vasarely.

From the point of view of science, the first experiments with optical illusions appeared in the late 19th century. Professor Thompson published an article in a scientific journal, in which two round planes were depicted as illustrations, creating a sense of movement. As an artistic movement, Op Art became known to the general public in 1965 at an exhibition in the Museums of Modern Art in New York. Later on, collective exhibitions of various representatives of this art movement were successfully held all over the world: the group Zero (Dusseldorf), the group T. Dusseldorf. (Milan) and many others.

Optical illusions are based on the peculiarities of human visual perception, this distortion is initially present in the mechanism of contemplation of the surrounding space by the human eye, in other words, the image is present not only in reality but also in the brain of an individual. As a result, scientists have established that the process of visual perception proceeds according to a number of rules, which was successfully used by artists to create their works.

Artist Bridget Riley in “Cataract 3” creates a wavelike effect. In her other work, “Straight Curve”, she builds a rotating spiral out of black and white lines.

Famous artworks in the style of Op-art

Josef Albers. Structural Constellation (1954). Josef Albers is one of the founders of op art, a German and American artist, designer, poet, and teacher. In this optical illusion, Albers experiments with the perception of space, playing with the arrangement of lines, he demonstrates how the depth of space can be ambiguously perceived. Black rectangular figures intersect each other at different angles, disorienting the viewer’s perception, it is not clear what is ahead or behind. 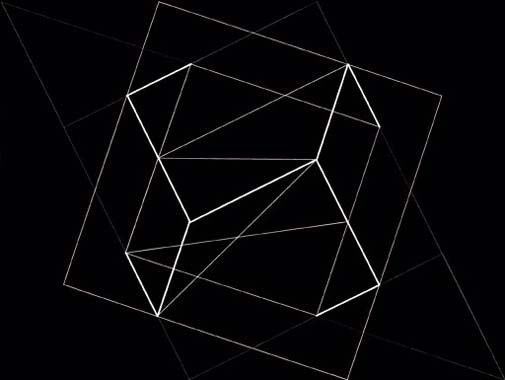 Bridget Riley. Flame (1964). Zigzag black and white lines create a sense of circular rotation. The brain interprets the image, alternating patterns, and it seems that the circle is moving. Riley said: “My work was developed on the basis of empirical analysis and synthesis, and I have always believed that perception is the medium through which real life experiences are passed”. 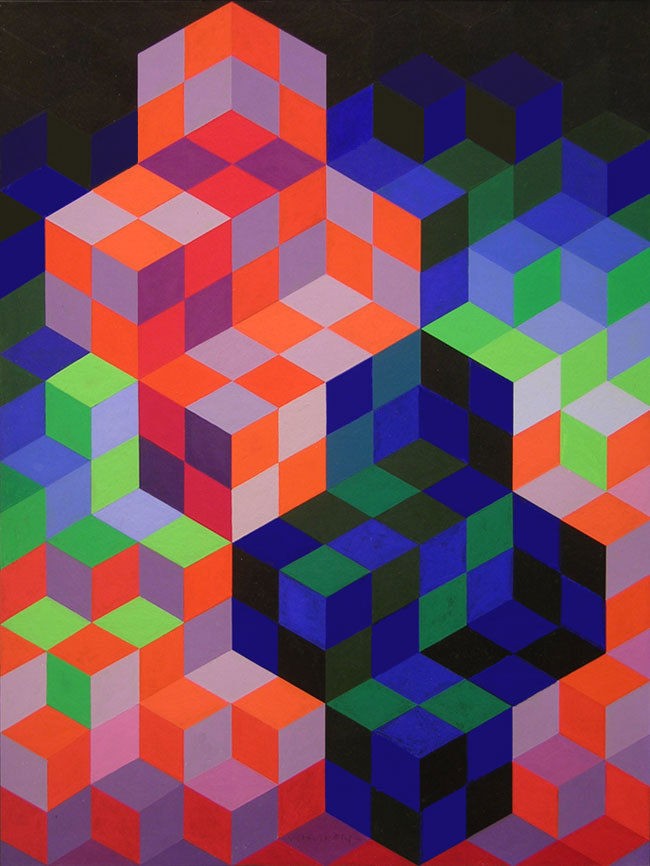 Jesus Rafael Soto. Sphère Bleue de Paris (2000). Soto came to France from Venezuela in 1950, was one of the few South American artists who made an important contribution to the development of op art and kinetic art.

The unique form of “The Sphere of Paris” seems to challenge gravity, and reminds us of the origin of the world and the universe. The work is made of thin blue rubber threads. Soto began doing such work in the mid-1960s, and although the work was created many years after the OP Art movement went into decline, it does not lose its appeal and artistic value. And the artist himself is respected for his creative constancy and devotion to Op-Art. 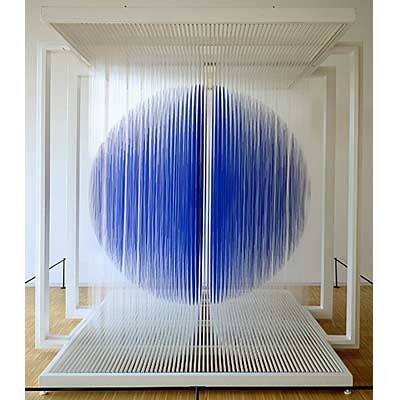 In fact, any painting is an artistic deception – are the color spots and lines located on a plane. But that is the artist’s skill – to depict the volume and perspective so as to create a spatial illusion for the viewer. Psychologists have proved that our eyes are trying to collect from chaotically scattered strokes of the whole system.

One of the well-known optical effects in fine arts is shifting pictures: objects on them change their meaning from different angles. Such paintings are called anamorphoses. Embodying legends and myths in the canvases, artists painted some animals (for example, a basilisk, a unicorn) is intertwined figures of people, other animals, and birds. They also encoded satirical caricatures of the current government in their canvases, but only those who were initiated into it could see them from the right angle.

Like many Italian painters of the XVI cent ury, Arcimboldo was a master of all trades: such a reputation he earned his portraits of deception. Some of them are made up of flowers, ears, or vegetables (the latter are the ones that like to decorate the reprints of “Gargantua and Pantagruel”), others pretend to be still lifes if they are turned over.

French Dadaism artist, chess player, a friend of Erika Sati from a creative family (two brothers and sister of Duchamp also became artists) – one of the most influential and controversial artists of the XX century. Duchamp’s main invention is a rare-made object, the placement of a household item (such as a urinal) in an artistic space. Duchamp’s works inspire not only artists but also poets: even during his lifetime, there was a genre of poetry, poetry found in non-ethical lyrics.

This Belgian artist is usually referred to surrealism, but his paintings are more suited to the definition of “magical realism”: Magritte puts simple objects in an unusual context, plays with meanings, mocks interpreters. Magritte’s bizarre paintings are particularly loved by book designers who place them on the covers of the books of Sartre, Pavich, Borges, and even Freud (whom René himself did not like).

The Dutchman Escher was equally inspired by the art of the Italian Renaissance and the work of mathematicians. In his engravings (he preferred this technique because it allowed him to obtain many impressions from a single workpiece), Escher experimented with transformations, fractals geometry, and impossible figures. Escher is probably the second most quoted artist after Dali.

You can learn more about the Escher legacy in this film.

A Canadian artist from a gypsy family met Dali, Magritte, and Escher paintings when he was a child – the last two influenced him most. Magritte took from him the seeming parochiality of landscapes and the banality of figures, from Escher – interest in the transformation of the living into the inanimate and back. Gonsalves paints slowly, a saturation of his canvases with many details – there are about four paintings a year, and each is amazing.

Tim and Sue met as students and have been working together for a quarter of a century. Two Brits are experimenting with form and meaning. Their most famous works seem chaotically piled with garbage or a cluster of very prosaic objects. But when a spotlight is directed at them, the sculptures appear (how to avoid a pun) in a new light, casting wonderful shadows on the wall.

There are artists who try their best to stand out. Liu Bolin, on the contrary, makes great efforts to blend in with the surrounding space. The artist chooses a background – a wall, a shop window, a sculpture, even a bulldozer – and becomes a canvas while his assistants paint it for several hours. The painter works all over the world, maybe he’s standing behind you right now and you have no idea.

Also interesting are the “hidden” paintings. On them in a bouquet of flowers you can suddenly find a human face, in a bird you can suddenly see a beautiful female figure – it’s all metamorphoses of illusiveness. The most famous hidden canvas is the “Disappearing images” by Salvador Dali, which depicts his portrait and his wife’s figure. If you look at the painting from afar, you can see the face of the artist himself in profile, and as you approach, the figure of the woman reading the letter becomes clearer.

Great skill in optical illusions reached the ancient Greeks. A vivid example is the most famous Athenian temple – the Parthenon. Architects in the design of this structure provided that its side columns in the front view will be located against a bright sky, and the middle – on the background of the dark sanctuary of the temple. Corner columns were made wider, given the effect of “optical irradiation” – on a light background of dark objects seem less. The middle columns were smaller in diameter. However, visually all columns seem to be quite the same, and a different value is revealed only when measured. 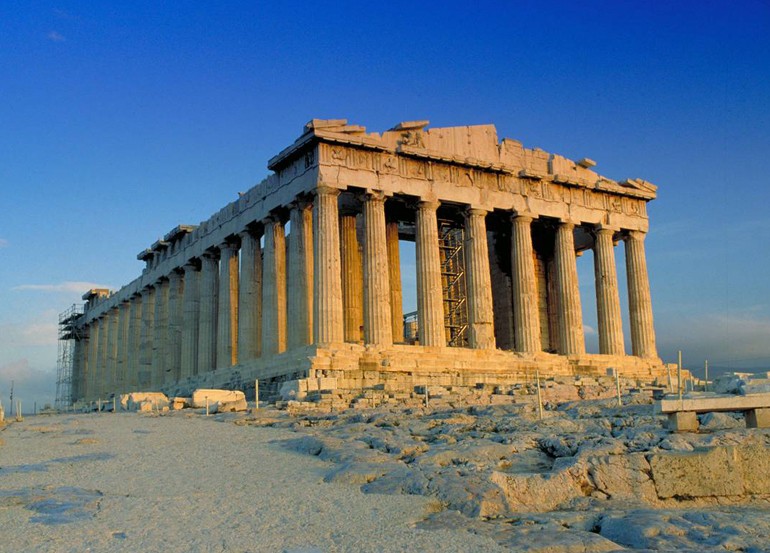 An interesting technique was used in the famous The Hall of Mirrors in the royal Palace of Versailles. It represents a large gallery (73 meters long), 17 arched windows that overlook the garden. On the opposite wall opposite each window, there are mirrors similar in size. From the inside, it seems that the gallery is surrounded by a lush blossoming garden on all sides as the trees are reflected in the mirrors. This optical illusion was then repeated in some European monarchs’ residences. 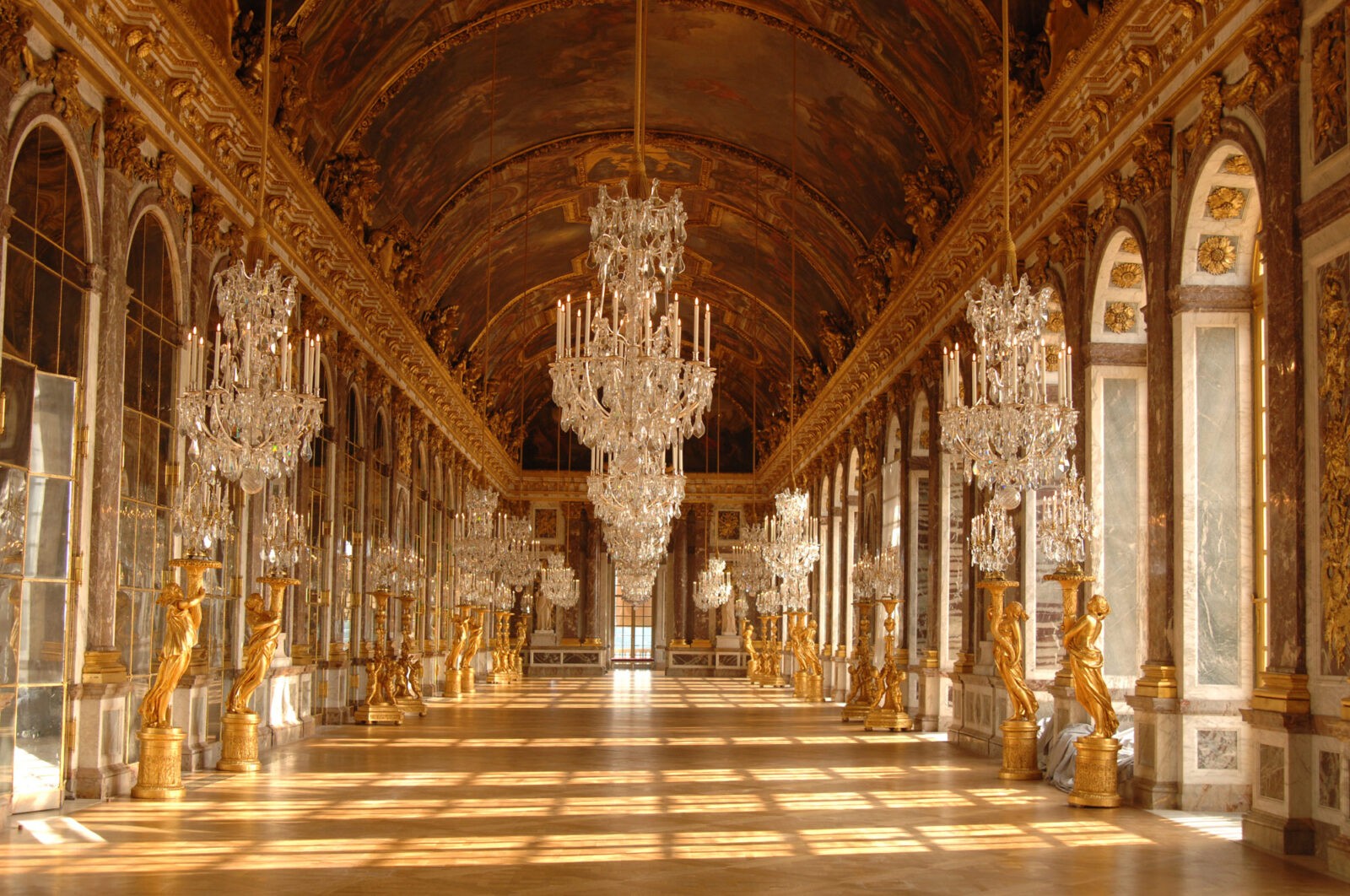