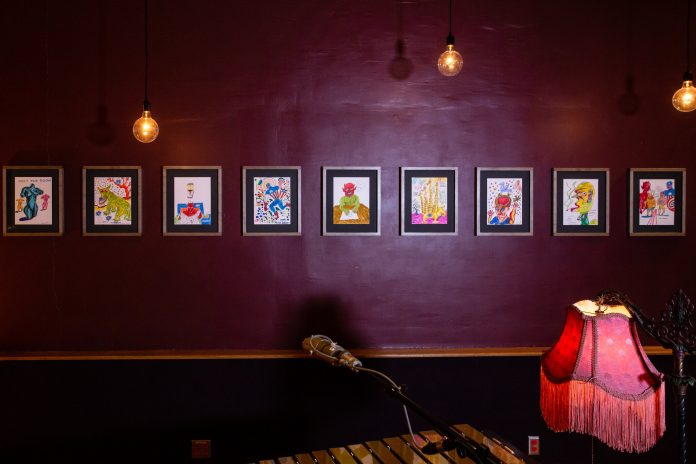 The art market is constantly changing, after the turbulent noughties in the 2010s, new “dark horses” capable of changing the situation emerged. 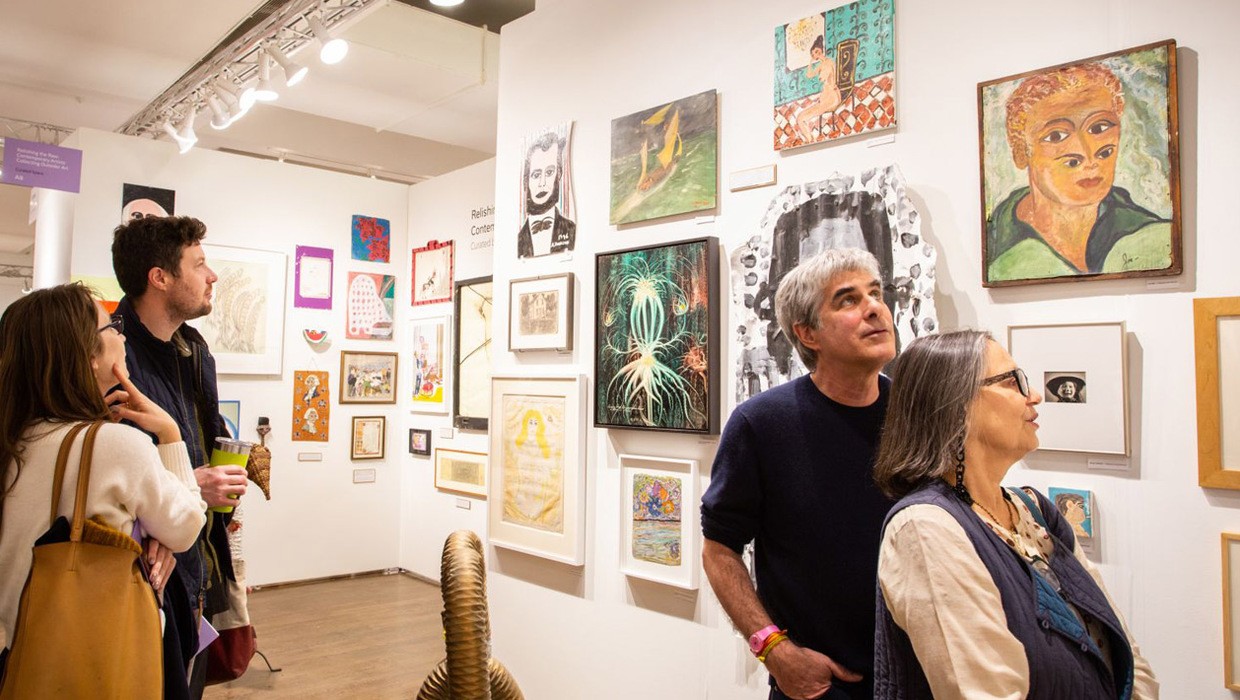 The Age of the Outsider

Outsider art is most often thought of as a field of independent, “pure” and free art. This independence from the dogmas and canons of artistic tradition or institutional practice is almost always projected onto the art market. It seems that the art of outsiders should be some “thing in itself,” far from the commercial turnover. But if we remember the history of outsider art and the related or identical phenomena (the art of the mentally ill, art brut, visionary art), we see that outsider art was commercialized even in its infancy, although the specificity and rarity of these objects never resulted in a stable commercial institutionalization. For example, Adolf Wölfli, a patient in a Swiss hospital who spent more than thirty years there, a classic of early European outsider art whose name for many processes has become a “point of reference” thanks to Walter Morgenthaler’s 1921 book, from 1916 onwards sold his own works quite successfully, but only those he created specifically for sale, calling them Brotkunst (“bread art”) – these works for Wölfli were not part of the series. And Jean Dubuffet – the father of art brut – was not only an artist, theorist, and collector, but also an art dealer. That is, the sphere of outsider art was not originally thought of as absolutely nonprofit. Since the mid-twentieth century in Europe and America, there have been specialized galleries and art dealers working with works of naive, amateur, outsider art.

In the last decade, experts and market players have noted an increase in interest in collecting outsider art. This is happening not only thanks to Christie’s specialized auctions, the appearance of outsider works at Sotheby’s, but also thanks to major museum institutions – the Metropolitan Museum of Art, the Brooklyn Museum and the Smithsonian – which are developing interest in this field by organizing exhibitions of art brut and outsider art, and the special projects of the Outsider Art Fair (OAF) at Frieze.

Despite the difficulty of estimating the market for outsider art, Andrew Edlin, owner of Outsider Art Fair, speaks of an annual turnover of $40-50 million. And thanks to said events, outsider art is gaining more recognition. This is especially noticeable when compared to the very beginning of Outsider Art Fair (founded in New York in 1993), when the number of visitors was much lower and very few people were interested in buying works. As Edlin says, naïve art was more interesting back then, but audiences are changing. Today, that interest is largely coupled with an understanding of the processes of contemporary art, and more and more collectors are willing to buy outsiders. This juxtaposition of the fields of the outsider and actual art is not something radically new: a century ago, Hans Prinzhorn borrowed the very language of description from contemporary art criticism in his 1922 book The Art of the Insane, which became iconic, and incorporated the definitions and characteristics with which expressionist art was described. Another fifty years later, in 1972, Harald Seeman showed the art of the Outsider classics at Documenta in Kassel.

Today Outsider Art Fair is one of the most important institutions of outsider art, seriously influencing the commercialization of this field. OAF in New York has been a flagship event since 1993, and since 2012 the annual OAF is also held in Paris, and, according to the organizers’ intention, is focused on the European art brut.

In 2020, Outsider Art Fair in New York featured about 60 participants – galleries and art dealers that work with the phenomenon of outsider, naive, primitive art. It is a very impressive number, and all the more so if we compare it with the situation of naive, amateur, and outsider art in Russia, where in fact there is no such segment of the art market, and two or three art dealers and galleries work in this field. Of course, as everywhere else, only demand can generate supply.

The geography of the American art market for the outsider, primitive, and naive art is very broad, with galleries and art dealers working outside of New York, Washington, and Chicago (these are the cities that Europeans who are interested in outsider art hear about). The Outsider Art Fair in New York attracted a wide variety of galleries and dealers, of varying scale and specialization – from the oldest and most distinguished Ricco/Maresca Gallery (New York) and Carl Hammer Gallery (Chicago) to the small, emerging and highly specialized. Overall, the level of selection at OAF-2020 New York was very high and could easily compete with the auction of outsider art at Christie’s, which took place during the fair on January 17. A variety of galleries exhibited a brilliant level of works by classics of American outsider art, including Henry Darger, Martin Ramirez, Bill Traylor, and others. The high interest of collectors in this segment of the art market is evidenced by the fact that many works were sold on the very first day, and almost entire booths were sold out clean – especially surprising in comparison to other segments of the art market. And the average cost of the works at the OAF is thousands and tens of thousands of dollars.

Like the Christie’s auction, the New York OAF-2020 was focused largely on American outsider and naive art, but there were exceptions – non-U.S. exhibitors such as Rizomi (Italy), Polysemie/Robert Poulin (France), Kushino Terrace (Japan) and others. However, there were not many of them, which is understandable. Cavin-Morris Gallery (New York) presented a very strong selection of European Art Brut. If we talk about Russian outsider art, it was represented by only one author in a French gallery – a classic of outsider art Vasily Romanenkov, whose works at the OAF were evaluated up to $7.5 thousand.

Outsider art is becoming a significant part of the art market – as evidenced by the appearance of works by outsider artists at the world’s major auctions, and, moreover, by the organization of special auctions. The auction house Christie’s has held five auctions of outsider art in New York since 2016, which clearly showed very good growth of this segment. Here are the results of those auctions.

Market development is expected to continue. While this year’s bidding has shown some decline, this is due in part to the different number of lots: 159 in 2019 and 130 in 2020. Also (and this is the main intrigue of this year) was withdrawn from bidding a large work by Henry Darger, one of the most expensive artists of outsider art, whose double-sided painting was the top lot of the 2019 auction and was sold for $684,500 (this year a similar one was auctioned). By the way, the estimates of Darger’s works have predictably risen since last year to $400-600k versus $250-500k.

Christie’s specialized auctions showed a perfect annual increase in the value of “American classics”. Interest in this particular segment of outsider art is quite predictable, American collectors (and they are the main “players” in this market today) are mostly interested in the national cultural heritage.

Let’s compare last year’s and this year’s figures. In both 2019 and 2020, the leading positions are taken by works by Bill Traylor (circa 1853-1949) and William Edmondson (1874-1951). In the 2020 auction, a two-sided work by Traylor ($507,000) took the lead (clearly due to Darger being withdrawn from the auction), his other work was the second most expensive in the auction. Traylor’s work increased in value by more than $100,000 over the year, although it was presented at this year’s auction in large numbers, which may have indirectly affected the value of individual works. 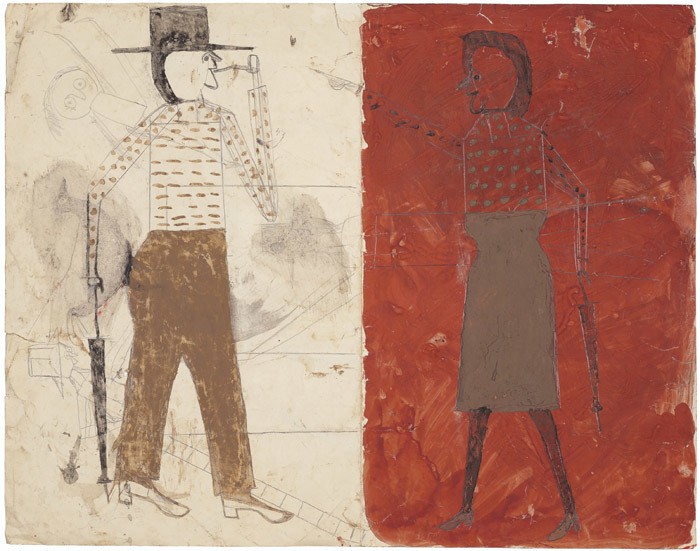 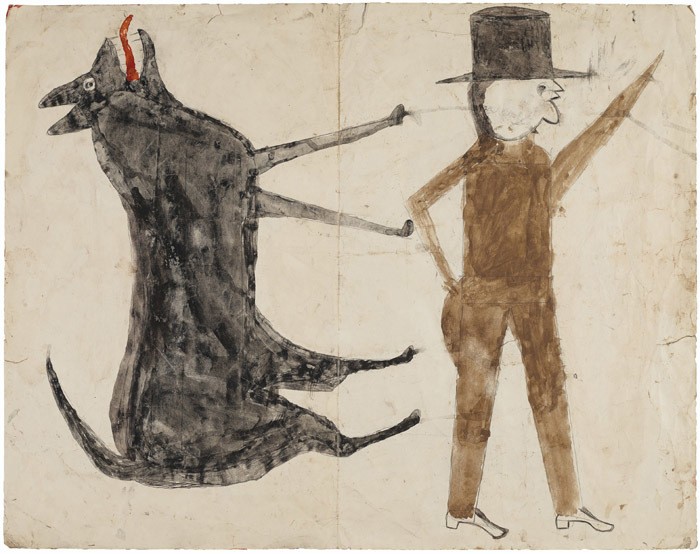 Bill Traylor. Man on white, a woman on red / Man with the black dog. Paper, tempera, pencil. Double-sided sheet. Sold at Christie’s Outsider Art auction January 17, 2020, for $507,000 © Christie’s Images
William Edmondson did not break his own record this year, but that was also quite predictable. Last year’s and this year’s lots were clearly unequal. For example, in 2019 there was a wonderful story composition with a woman walking that sold for $237,500 with a huge excess of the estimate ($60,000-80,000). This year, according to the old-timers of the auction, was unprecedented. Very average utilitarian objects – a bowl with two handles and a pair of mugs – were sold for unprecedented amounts for such items. That this was a surprise to everyone was evidenced not only by the whispers in the hall: Crazy, crazy, but a completely different order of estimates of these objects. Bowl with two handles was sold for $ 175,000 (with an estimate of $4-6 thousand), and a pair of mugs – for $ 162.5 thousand (estimate of $7-10 thousand), the struggle for these lots between anonymous buyers who bid by phone was very serious. But we must remember that it was Edmondson who was the absolute winner of a similar auction in 2016, it was his work that was sold for a record $785 thousand with an estimate of $150-250 thousand.

Also among the American outsiders, this year at Christie’s specialized auction for a hundred thousand dollars passed the value of the work of Thornton Dial (1928-2016), who was represented by several works. Last year the leading boundary of $100 thousand was crossed by Martin Ramirez.

Christie’s bidding also shows the ratio of interest in American and European outsider artists. Christie’s 2020 auction featured two European stars of outsider art, names with great historical and museum history – Augustin Lesage (1876-1954) and the already mentioned Adolf Völfli (1864-1930). Lesage’s work looked simply stunning and could enter any museum collection: large-scale, magnificently preserved, with very subtle coloring and perfect elaboration, so characteristic of the best paintings of this visionary artist. Just as impeccable was the provenance of the work, associated with the artist’s family. But for all the merits of the lot, it was sold barely above the lower limit of the estimate (100-150 thousand). Bargaining on it almost never happened.

A similar story happened with Adolf Wölfli, whose small but very distinctive work went for barely more than $25,000. This sale of Wölfli at such a low price is all the more surprising because in 2018 the artist’s work sold at Sotheby’s for $795,000 with an estimate of $150-200,000, a price record for the artist’s work. And while this work surpassed all of his other works for sale, still, given the general price corridor of Wölfli’s auction sales, $25k is more of an exception.

Instead of a conclusion

Of course, we understand that for the market for outsider art these five to ten years are only the beginning, beyond which a lot can wait for us. The connoisseurs and the main players in the market are waiting for the hunters for actual art, who buy works for millions and tens of millions, to move to a new niche – outsider art. Some steps are already being taken for this. In recent years, the works of outsiders are emerging from the segregated state of specialized museums and exhibitions, and are beginning to be shown “on equal footing” alongside paintings by modernists and contemporary art artists. In the new MoMA exhibit opening in 2019, a separate room is dedicated to the museum’s first director, Alfred Barr, and his fascination with naïve and outsider art, and works by recent outcasts have appeared alongside the great and established. For example, in the abstract art gallery of the new MoMA exhibit, Hilma Af Klint’s work hangs next to paintings by Wassily Kandinsky and Fernand Léger.

As Rebecca Hoffman, director of the Outsider Art Fair, noted last year, organizers are eager to invite more dealers of conventional fine art. “The fair needs to be included in a dialogue with contemporary art,” Hoffman says. – “We’re interested in taking advantage of any opportunities that will appeal to audiences who attend Frieze, FIAC, and Art Basel. The 2020 Outsider Art Fair has demonstrated a step toward that rapprochement, and we’ll be waiting for the crucial psychological transition of selling outsider works for more than a million dollars, and it’s about to happen.