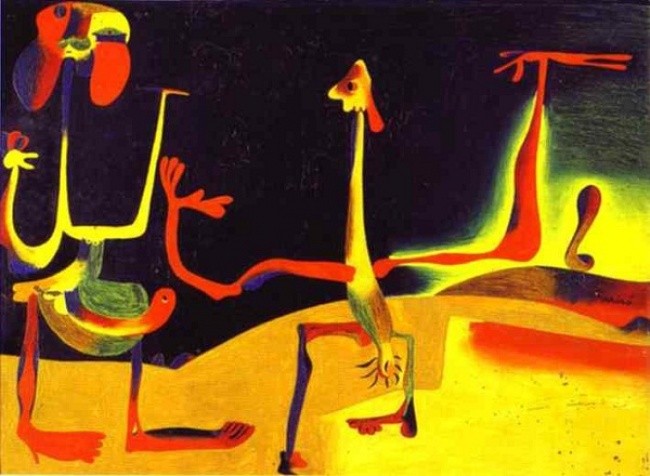 Some masterpieces of world art evoke mixed feelings, to put it mildly. We have collected for you the strangest, scariest and most controversial art works!

THESE PAINTINGS FRIGHTEN AND FASCINATE AT THE SAME TIME.

In fact, art is just art to amaze your audience. Sometimes you can find outstanding examples in the list of the most expensive paintings in the world! Some shocking by their subject, while the content of other paintings is shrouded in mystery. There are also paintings that disgust rather than delight. Nevertheless, the singularity and strangeness of these works set them apart from the crowd. The paintings in this example were sold at auctions for millions of dollars. Each is something amazing and filled with a special meaning.

One of the most extraordinary paintings on the top of the world’s most expensive works of art. Don’t hesitate if it made your knees tingle! The artist depicted a woman with lush forms in an abstract manner. Sharp strokes of black paint, disproportionate face and body – for the average person such art can be unpleasant to the eye. For a while the painting was kept in Iran, but because of strict censorship rules it was sold and taken out of the country.

Sensitive and sentimental women are advised not to get into the meaning of this painting. The great artist Gustav Klimt depicted the three stages of life: childhood, youth and old age. The little girl sleeps serenely in the arms of her mother, who in turn is serenely embracing her daughter. At the same time, the old woman in the other part of the painting bows her head in despair, exposing her sagging belly from old age. Indolence and youth stand side by side, reminding us of the inevitability of what is to come. Despite the sad context, the work is brilliantly executed and is not without reason recognized as a masterpiece of world painting.

Schiele is a pupil of Klimt, who followed his own path. In contrast to his teacher, Schiele’s masterpieces are much darker and more tragic. Some works border on pornography and are more reminiscent of the perverted pictures of a schizophrenic. The picture above is not his most disgusting work, but its meaning is hysterical. The painter painted it at the age of 28 before his own demise shortly after the death of his pregnant wife. The canvas depicts the artist himself, his lover and unborn child. The painting is clearly not created for impressionable people.

A beautiful and slightly creepy painting of the hand of the legendary Mexican woman. As you know, most of the artist’s paintings are self-portraits. She attributed this to the fact that she knows herself better than anything else, so Frida herself is the best subject for paintings. In this particular canvas, the Mexican depicted her masculinity and femininity connected by the same vessels. The latter in this image demonstrates the integrity and inseparability of the two halves.

This series of works by Monet is not at all terrible paintings, but very unusual. At close inspection, the canvas appears to be just a chaotic combination of brushstrokes and color transitions. But the further you move away from the canvas, the clearer the complete picture becomes. A marvelous landscape opens before the eyes of the beholder. The figures of boats appear first, followed by the outlines of the famous Waterloo Bridge.

For many people abstractions are strange and incomprehensible paintings that mean nothing. So why are they so popular? It’s all in the way they are created. In addition to the genius of the color scheme, Pollock’s painting is very unusually painted. When creating it, the artist used everything he could get his hands on: knives, ropes, sticks, broken glass and even a dustpan! The artist admitted that he gradually moved away from the classic tools of the artist in favor of unusual objects, which expanded his artistic possibilities.

The very title of the work already evokes a wave of indignation. But this is exactly the effect the author wanted, illustrating the hardships of the Spanish Civil War. The man and woman in the painting are reaching out to each other, but standing still. The vile and enlarged genitalia, the acidic hues and excrement are all intended to create an atmosphere of nasty sexuality, fear and disgust.

“The Hands Resist Him” Bill Stoneham

Take a closer look at this picture. Look at the details, look into the boy’s eyes. Brrr. Creepy? That’s what every person who looks at it at least once thinks. The work sold on eBay for just $1,000, but after it was published, the buyer was flooded with letters asking him to burn the painting out of harm’s way.

There were rumors that ghosts or demons were attached to this painting, that many people were having panic attacks. The author himself claims that it is simply a self-portrait. He depicted himself as a child, and the closed door symbolizes the line between dream and reality. The hands on the glass represent other lives and possibilities, the doll next to it is a guide between alternative worlds.

“The Massacre of the Innocents” Peter Paul Rubens

A €5 million canvas by Rubens is capable of bringing mothers to tears. It is a delightfully beautiful, but terrifying painting. The famous master depicted not the most pleasant episode from the New Testament story. Ironically, the beating of infants is a common subject on religious grounds. The whole point is that young children are considered holy martyrs after death. The image itself symbolizes cruelty to innocent people.

It’s hard to see at a glance, but this painting depicts sketches for a portrait of a man. In 2008, the work broke a record on the art market and was sold to Roman Abramovich for $86 million. The surrealist canvas is based on an ancient Greek myth about the persecution of Orestes by the Furies. But here, instead of the mythical character, we see the artist himself and his own torment.

Tragic events and plots often form the basis of art objects. But each master presents this or that story in his own way. Andy Warhol, who became a real sensation in the mid-20th century, did it in an extremely original way. Once the master saw a picture of a car crash in the newspaper and shouted “Eureka”! The artist cut out the photo and repeatedly duplicated it by silkscreen printing, filling in only part of the canvas with the photo. An unusual work emerged that later sold for millions of dollars.