Home News 6 Things the Whitney’s New Edward Hopper Show Teaches Us About the... 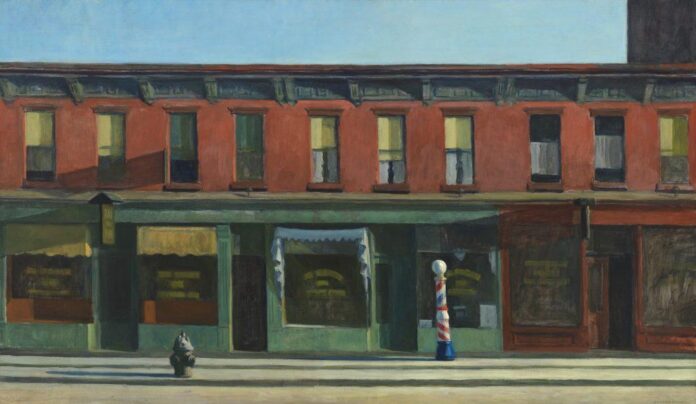 The Whitney Museum’s newly opened show “Edward Hopper’s New York” is sure to be a blockbuster in the fall art calendar, both for veteran New Yorkers and for the throngs of international tourists who flock to the museum’s eye-catching building at the base of the High Line elevated park.

With over 3,100 Hopper pieces, including more than 220 paintings, the Whitney is the largest holder of the artist’s work. And while the museum has held many exhibitions devoted to the artist over the years, this is the first to focus exclusively on his relationship to New York City, where he lived and worked for more than six decades.

“There is truly no better place to experience this group of works that were largely created only blocks south of where the museum is today and that connects us in often-unexpected ways with the past and present of our city,” said lead curator Kim Conaty during a press preview. Its last major Hopper show, which concentrated on the artist’s drawings, took place in 2013, when the Whitney was still at its former, longtime home in the Marcel Breuer-designed building on the Upper East Side.

The current exhibition is a dynamic mix of artworks and archival materials that tell the story of Hopper’s life and work in New York City—from visits made during his youth from his hometown just north in Nyack on the Hudson River and later during his art-student days to commuting into the city while working as a commercial illustrator and eventually as a fine artist and master of shadow and light, who continuously explored themes of alienation and loneliness against the backdrop of the rapidly developing metropolis.

Along with famous paintings and sketches from the museum’s own collection, there are dozens of major institutional loans as well as archival materials, including letters, postcards, theater tickets, and notebooks, that carefully record both earlier advertising commissions as well as later painting sales.

As museum director Adam Weinberg pointed out at the preview, the show is sure to be a learning experience for even the most seasoned Hopper experts, including himself. “It’s rich in materials, there is so much to see. I learned so much in the process.”

Here are six key takeaways on Hopper’s relationship to, and life in, New York City. 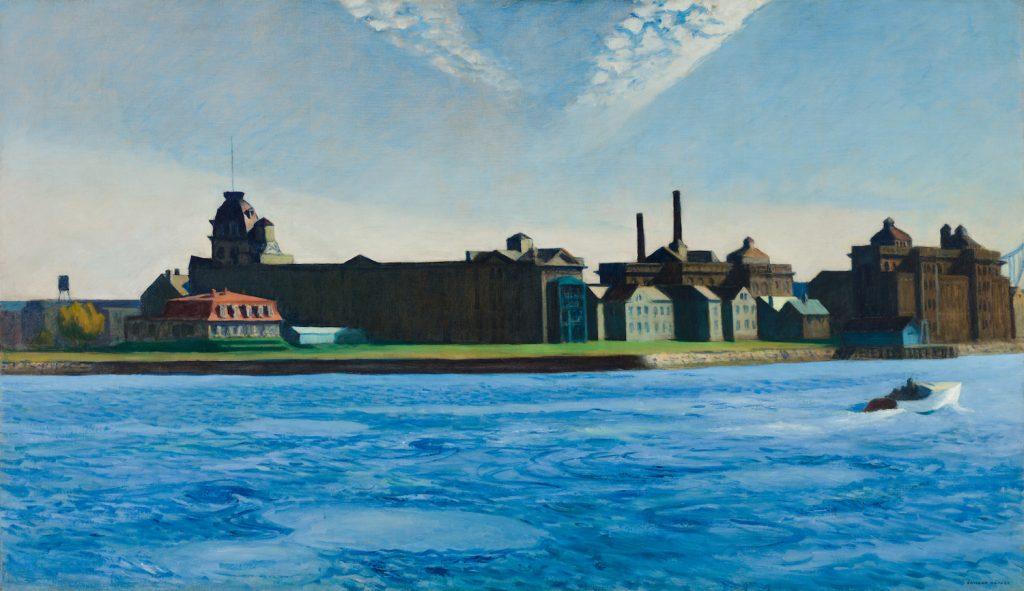 The Whitney Is Truly Hopper’s Home

Hopper was a touchstone for the Whitney even before the museum was officially founded, said Weinberg. In 1920, the artist was 37 years old when he had his first solo exhibition at the Whitney Studio Club—an association formed by Gerturde Vanderbilt Whitney that was the forerunner of the museum.

Hopper had eight exhibitions at the Studio Club before it closed to make way for the Whitney Museum, which, at the time was on 8th Street and which is now the studio school. It’s also not far from Washington Square North, where the artist lived and had his studio for about 63 years.

In May of 1930, the Whitney became one of the first museums to acquire one of Hopper’s works when Vanderbilt Whitney bought(1930). The artist participated in 29 annuals and biennials at the museum, “which is I think probably the record,” Weinberg said, adding: “Hopper’s painting (1932) was included in the first Whitney Biennial in 1932 and it’s back here 90 years later in the museum show.” He noted that the 3,100 Hopper works owned by the Whitney represent “roughly ten percent of the total holdings,” of the museum. “The Whitney is truly Hopper’s home.”

“The Horizontal City” is one of eight thematic sections that make up the show. As Conaty pointed out, it is “not a retrospective since it doesn’t include works from Maine or Cape Cod or Hopper’s other locations of interest. But it does cover Hopper’s entire career, since New York had been a part of his life since he was a child.”

The artist “famously detested skyscrapers and the increasing verticality of the city,” said Conaty. With respect to , she said she is fascinated by the fact that it was painted in 1930, the same year that the Chrysler building became the world’s tallest building only to lose the title a few months later to the Empire State Building. “Yet the vertical dynamics of the growing city were of little interest to Hopper. And there is a certain irreverence here in the idea of painting compositions like E in that year and a constant tension between longing for the past and yet an embrace of the modern city. And there is, of course, a hint of what is to come by the looming gray rectangle,” in the upper right hand corner of the work. 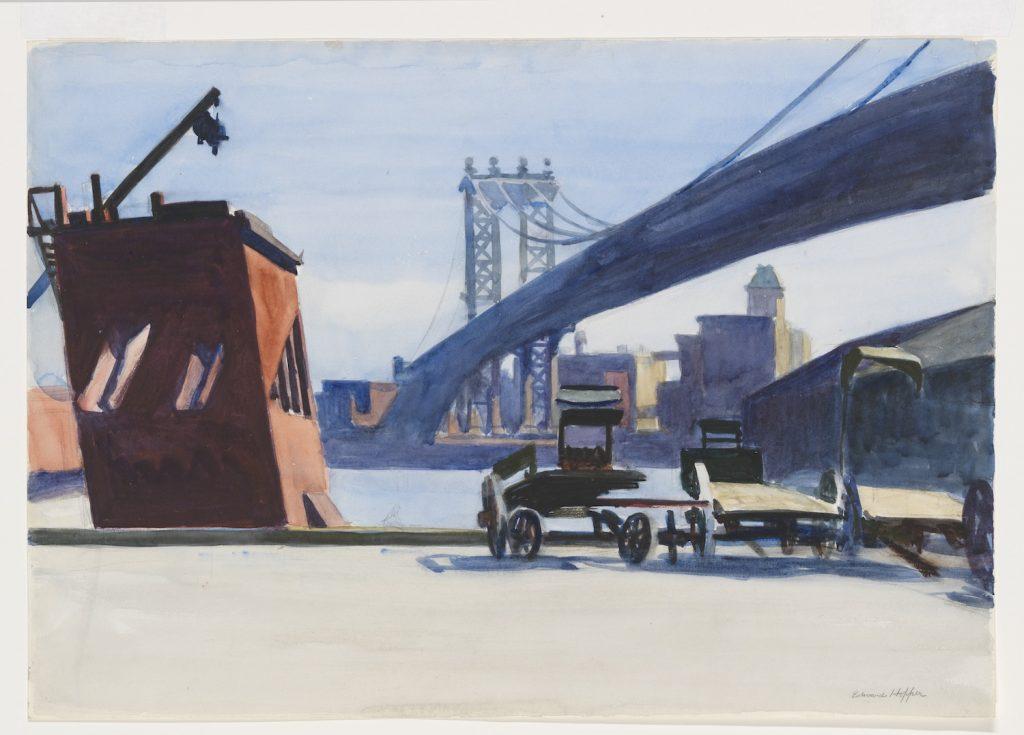 Noting that the Manhattan Bridge, built in 1901, was a site that Hopper returned to many times, and of which there are numerous depictions in the show, Conaty said: “I love his focus on the Manhattan Bridge, because on the one hand it’s not the Brooklyn Bridge.” Hopper was “skeptical of landmarks and popular, ‘postcard’ New York sites.”

There are also paintings of the Queensborough Bridge (Hopper lived nearby on 59th Street in his early years in the city) as well as views of Blackwell’s Island, now known as Roosevelt Island, the Williamsburg Bridge and the lesser known Macombs Dam Bridge near 155th Street. The double-truss construction and Gothic Revival abutments of the Macombs bridge caught Hopper’s eye. 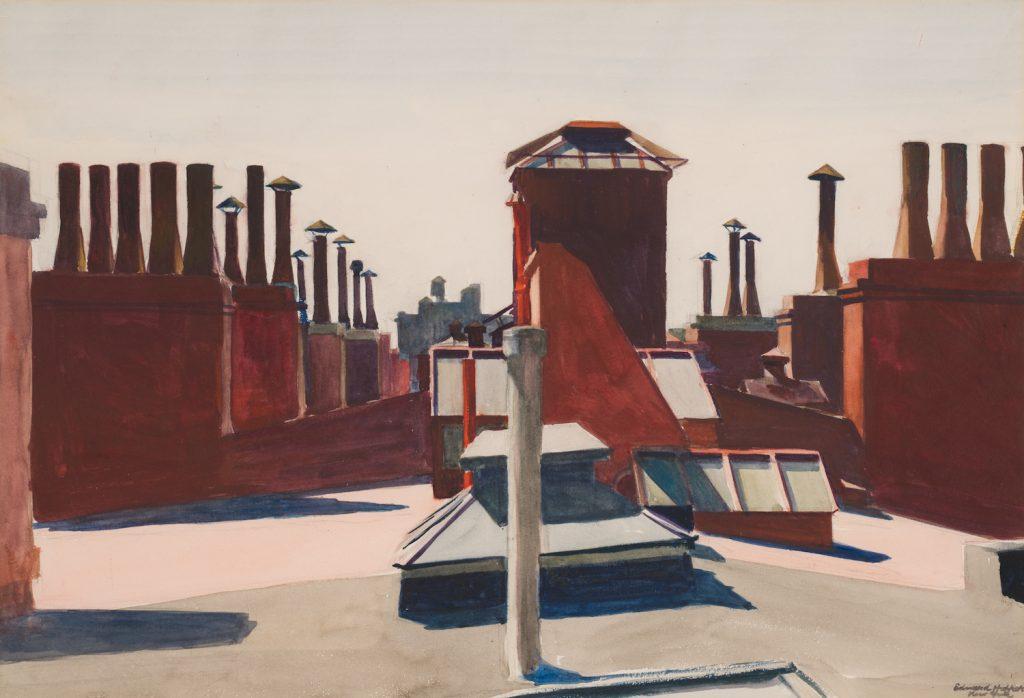 Historic Washington Square Park, which has its own thematic section, plays something of a starring role in the exhibition. Hopper and his wife Josephine, who was also an artist and the model for nearly all of her husband’s female characters, lived and worked there at their respective studios at No. 3 Washington Square North. Included in this section of the show are their own depictions of the surrounding area, such as the Judson Memorial Church, and portraits of the artists by photographers such as Bernard Hoffman and George Platt Lynes.

The couple were also fiercely protective of the area, with Hopper even penning letters to various civic officials and to developer Robert Moses when he thought his home was at risk of destruction due to encroaching development. Through the letters, said Conaty, Hopper “is trying to really fight off gentrification,” which certainly resonates in a place like New York.

According to the wall label text:  “The Hoppers witnessed the incessant cycles of demolition and construction as 19th-century buildings like their own were torn down to make way for new structures. During their many decades in Greenwich Village they advocated for the preservation of the neighborhood as a haven for artists and as one of the city’s cultural landmarks.” 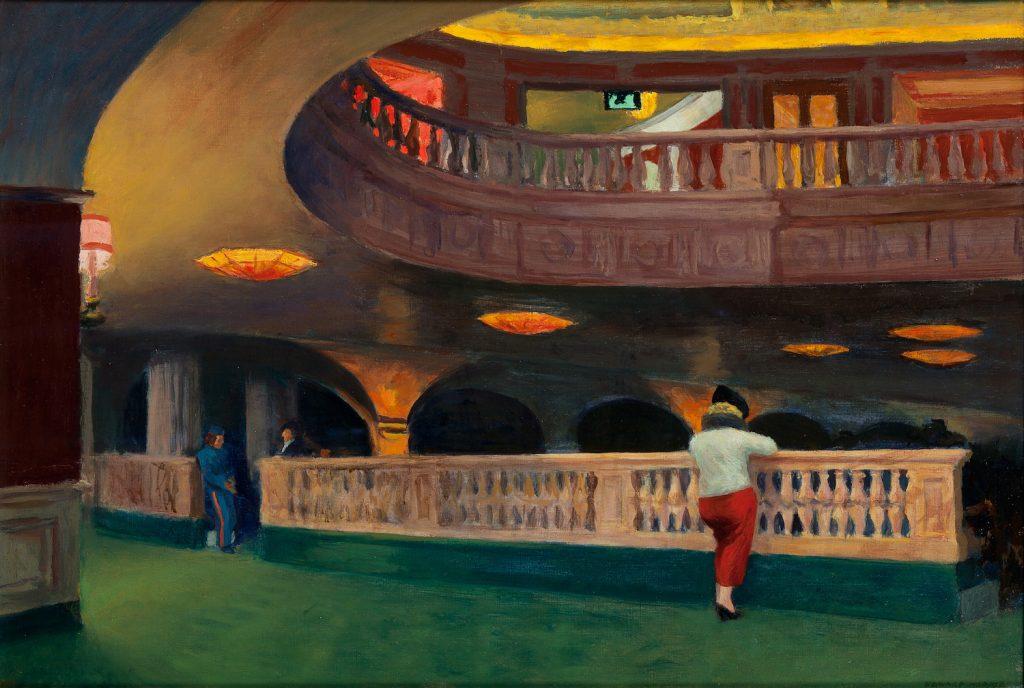 Love of the Theatre

A thematic section focused on the theatre is fascinating on two fronts. While paintings like (1937), which sat on 12th Street, speak for themselves, archival materials help to provide a window into the couple’s love of the theatre. Included in this section is a large collection of their ticket stubs on which Hopper meticulously recorded each production they attended. The fact that their seats were mostly in the balcony points to the couple’s frugality, said Conaty. Further, the materials are part of the Sanborn Hopper archive acquired by the museum in 2017. A lengthy profile delved into how the Rev. Arthayer R. Sanborn, who lived close to Hopper’s childhood home in Nyack, came to possess the huge collection of letters, photos, news clippings, and notebooks documenting Hopper’s life. 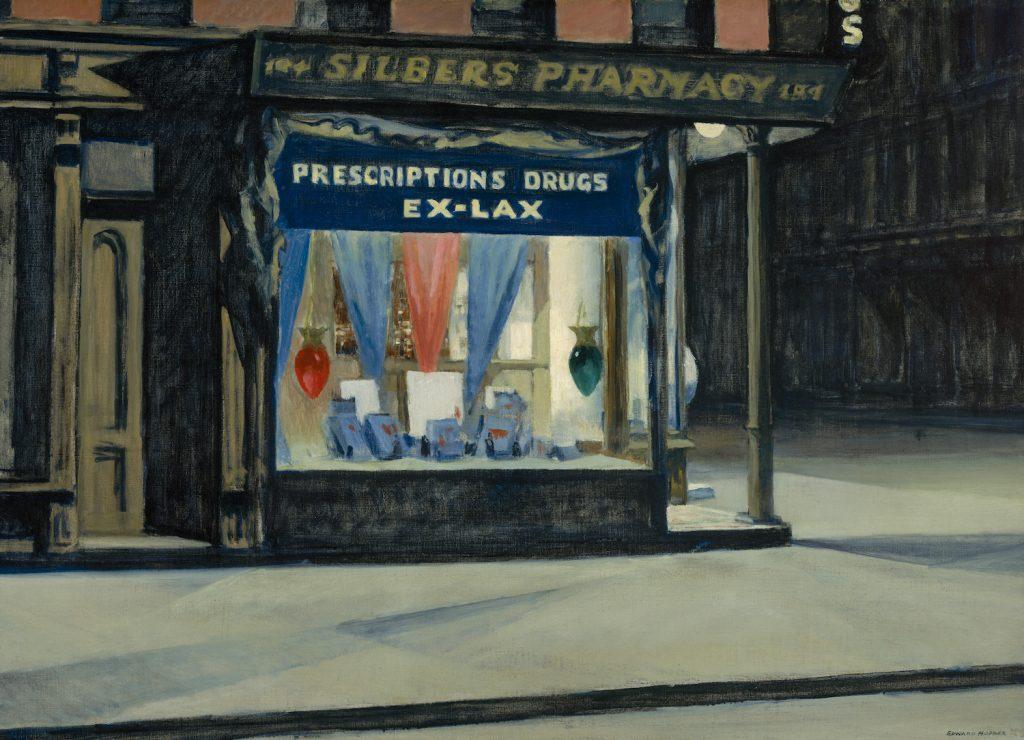 While many of Hopper’s paintings depict discernible New York sites and locations, others show facades and structures that are ultimately more “composites” of a streetscape, such as (1927) which Hopper endows with a name “but not an address,” according to the label text. Said Conaty: Hopper “is showing us this old view of New York, this nostalgic view of New York.. this almost jewel box atmosphere that was created to capture people’s attention and their imagination as they strolled the city at night.

“You would be hard-pressed to find a pharmacy so decorated today. I think our CVSs haven’t really taken that cue,” she joked.

“Despite his private, solitary, hermit-like nature, Edward Hopper was a man of the city, of New York City,” said Weinberg. “While capturing the soul and soullessness of modern life, he simultaneously shunned it and sought to find those moments of beauty and quietude, despite the changes that he detested. He painted the world that he saw, the world he knew, the world he invented, and the world he wished.”

Conaty summed up her remarks by recapping an exchange between a journalist and the couple during an interview at their home. When the reporter asked what they liked to do for fun, Jo, who was known to be the more outgoing one, said: “We’re not spectacular, and we’re very private, and we don’t drink, and we hardly ever smoke.” After a pause, Hopper said: “I get most of my pleasure out of the city itself.”