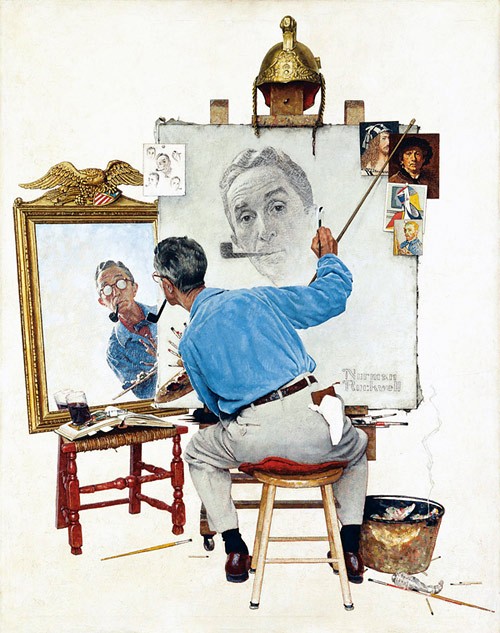 Norman Rockwell is a cult artist of the XX century. He did not just paint, he always depicted heroes with unusual warmth and sympathy, adding some humor to the paintings.

Perhaps there is no American who did not know and did not like the artworks by Norman Rockwell. This artist is famous for his picturesque, colorful illustrations depicting the life of an ordinary man. All his characters are ordinary people, millions of Americans identified themselves with. Rockwell’s realistic manner accurately reflected the atmosphere of everyday life, and the cute, simple-minded faces of his characters found a response in the heart of everyone.
Rockwell’s work has a special flavor: he masterfully combined simple bright colors, creating lively and optimistic illustrations. And typography amazingly fits into the composition, becoming an integral part of the illustration. 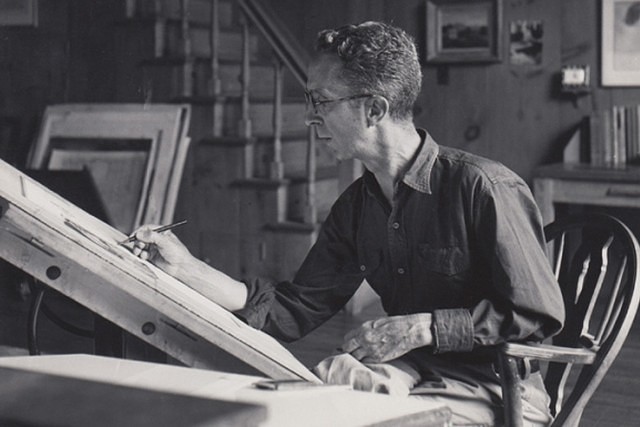 Since childhood, Rockwell knew he wanted to be an artist. At the age of 14 he entered the New York School of Art, and two years later the prestigious National Academy of Design. Very soon, however, he moved to the Art Students League, a creative group where at that time leading experts taught and many promising illustrator artists studied. It was through his studies at the Art Students League that Rockwell mastered the genre of commercial illustration, which made him famous throughout the country.

Success came to Rockwell at a very early age: he received his first order for four Christmas cards at the age of 15. And before he was 20, he joined the official edition of Boys’ Life, the Boy Scout Movement of America, not as an ordinary employee, but as an art director. Around the same period, Rockwell began a successful career as a freelance artist, constantly receiving many orders for illustrations for teen magazines.

In his paintings, Rockwell depicted an ideal version of the world, filled with kindness and warmth. Usually, scenes, where children run away from home, should cause anxiety and concern. But not here – a little fugitive who finds himself in a bar, surrounded by care and protected. The boy himself seems to be under guard in the center of the triangle – on the left, a policeman leaned towards him in a fatherly manner, the bartender smiles good-natured in the center, and on the right, judging by an empty coffee cup, another good man was sitting not so long ago. In the artist’s world, no child is in danger, and there are no more serious cases for a policeman than to talk to a young fugitive and convince him to come home.

In the United States, a national campaign was launched during World War II to encourage women who had never worked before to join the workforce. They were developing entirely new fields of work, taking the traditional jobs of men who had left for the front. Rockwell’s painting makes it clear that working for women, even in a factory, does not require abandoning femininity. The Rosie that we see in the painting is determined to contribute to the victory in the war. This is what made “Rosie the Riveter” a true cultural icon in the United States.

A vivid illustration of the emergence of racial equality in America in the 1960s. The heroine of the painting – 6-year-old girl Ruby Bridges, one of the first black students who were allowed to study in a “white” school, is accompanied by U.S. Marshals Service. Behind you can see the “KKK” inscription, an offensive “nigger” and a tomato mark thrown at Ruby.

This work is imbued with the spirit of post-war America. With this illustration, the artist wanted to answer many American questions: how, having gone through violence and cruelty, to keep faith in kindness and where to take strength to look to the future with hope? The idea of the plot came from one of the readers: a woman with a naughty little boy ran into a cafe before her eyes and, not at all embarrassed by the crowded hall, they froze in prayer for a few minutes. Impressed by the story, Rockwell wrote the scene as if he had seen it.

This work has become the most expensive work of American realistic art – in 2013 it was sold for $ 46 million.

“I wanted to express how a father feels when his children leave home,” Rockwell said about this illustration. Father and son sit on a bench waiting for the train that will take their son to college. The son is excitedly awaiting the train that will take him to a new, adult life. The opposite feeling is felt by his father – he is visibly drowsy, clutching an unburned cigarette and a hat in his hands. Father has nothing else to do but wait for the train to arrive, which will take his son away from his home.

You can tell by the girl’s happy face that she came out of the fight as a winner. Now she’s waiting to be called to the school principal’s office. It is hardly possible to determine how the fight began and who was its initiator, who suffered the defeat, but one thing is clear: the other, looks much worse than she did. Look at the face of the woman who looks out of the room with sympathy – probably her teacher.

November 2, 1948, is the day of the US President’s election. The main candidates are Harry Truman and the famous Governor of New York State Thomas Dewey. No one believed that Democrat Truman could defeat the bright and beloved Republican Dewey. The wife in the painting, a common American woman, wants a simple and clear Truman. And her husband thinks that smart Dewey is exactly what the country needs. When election night was over, it turned out Truman had just crushed Dewey. When the shock went away, analysts determined that ordinary Americans – workers, clerks, and small shopkeepers – had voted for Truman.

The Rockwell paintings are real mini stories about everyday life. Sometimes you even get the feeling that the illustrations are literally drawn from our lives. If you look closely, the hands on the shop assistant’s watch show 17:05 – she’s happy that this working day has finally come to the end.

The sign on the door “Marriage License” tells this story. This scene is full of contrasts, like many of the artist’s paintings. Bright daylight from the window illuminates an old dark room. Compare how focused the young couple is and how superfluous the bored old clerk here seems. God knows how many certificates he gave out in this shabby room. However, the clerk is feeling good – next to his cat, a heater, and a blooming geranium on the window, which he clearly cares for. A calendar on the wall shows the date of the wedding – June 11, 1955.

Norman Rockwell wasn’t just drawing American life. He preached universal values, he raised hope and faith in the national idea, because a smile and kindness saved in difficult wartime, and mutual help and decency came to the fore. He said: “There is no place for mud and ugliness in my paintings. I paint life as I would like it to be.”