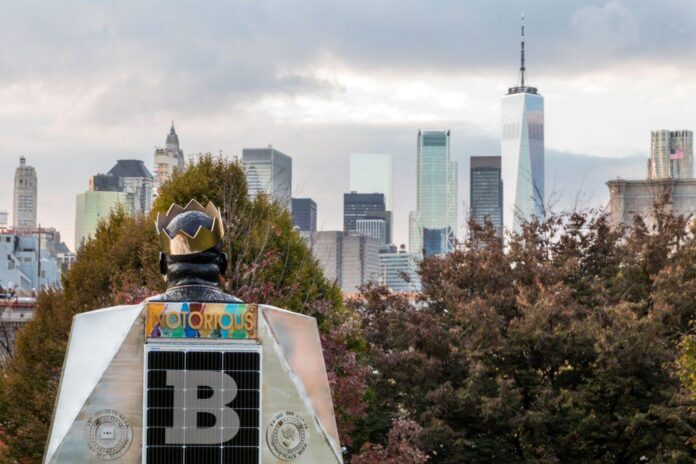 In the shadow the Brooklyn Bridge, a monument to another icon of the borough has been erected—that of hip hop legend Biggie Smalls.

Standing nine-foot tall, the sculpture pays homage to Kings County musical royalty in both style and function. Adorned with a crown and holding a scepter-cum-microphone, his stainless-steel body is embedded with solar-powered speakers that sound out a playlist curated by DJ Mister Cree, the man credited with kickstarting Biggie’s career.

The decision to pair classic sculptural techniques with modern technology is a bricolage somewhat akin to hip hop itself, artist Sherwin Banfield tells Artnet News: “I’m a traditionally trained figurative sculptor and wanted to take something classic then remix or sample it with something new and fresh.”

Cast in the Brooklyn foundry owned by Bill Makky, best known for bronzing the Wall Street Bull, the work is dotted with references to Biggie, most obviously in the form of his first studio album enmeshed in the piece using resin.

The sonic sculpture is the latest art project funded by Downtown Brooklyn Partnership and the Dumbo Improvement District, two organizations dedicated to enhancing the cultural life of local public spaces. With the 50th anniversary of hip hop approaching, the organizations thought it fitting to celebrate Biggie, née Christopher Wallace, a musician who was a trailblazer for the genre before being killed at the age of 24. 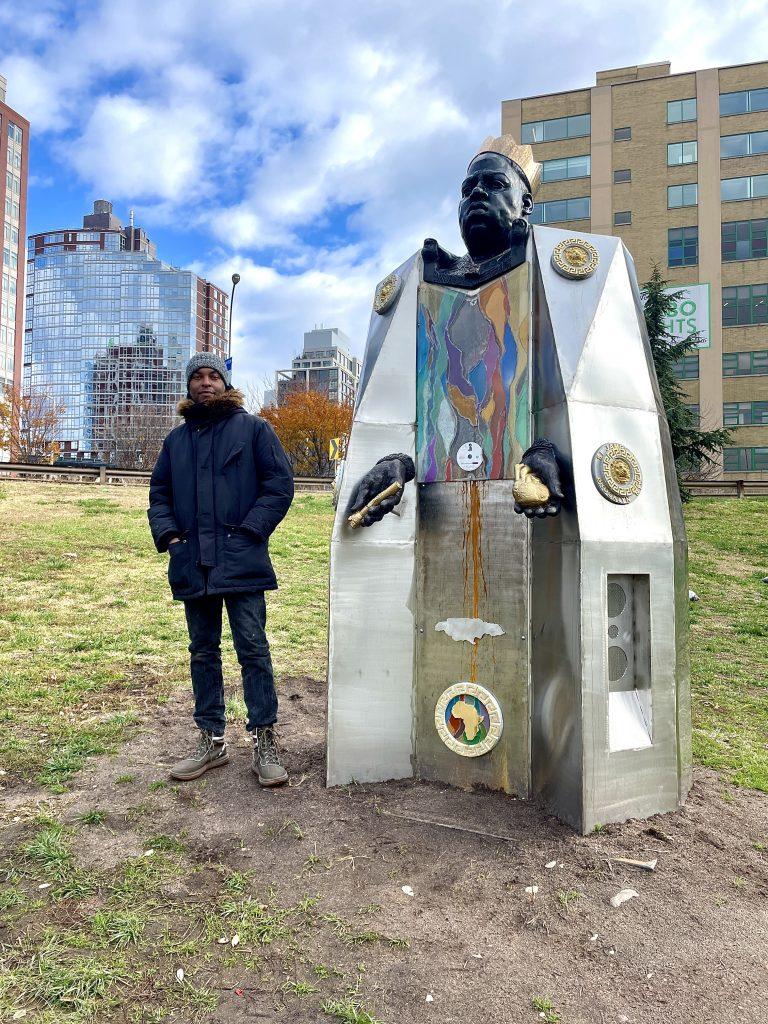 Sherwin Banfield with the sonic sculpture of Biggie Smalls. Courtesy of the artist.

“Giving space to new kinds of monuments and works is what a public art fund is all about,” said Alexandria Sica, President of the Dumbo Improvement District. “This is a spectacular piece that will greet countless New Yorkers.”

Titled “Sky’s the Limit in the County of Kings,” the sculpture was Banfield’s response to a call for New York city artists to propose a work to stand at the entrance to the Brooklyn Bridge. The Queens-based artist had previously sketched out a design for a monument dedicated to Christopher Wallace, so when his cousin told him about the open call, he promptly polished the shelved project and sent it over.

“The location had a profound impact on the work,” Banfield said. “It’s on a hill, and I wanted viewers to ascend towards a regal monument and be welcomed with open arms and two essential human qualities: the voice through a microphone and love via a heart.”

The public art installation is the latest Brooklyn art tribute to Biggie following a pair of murals in Bed-Stuy and a commemorative MetroCard released on what would have been his 50th birthday.

The work will remain on display through Spring 2023.

In 2020, Blue-Chip Art Businesses Flocked to the Hamptons. Are They in It for the Long Haul?