Home News Artist Ani Liu Has Some Radical Suggestions for What Pregnancy Could Look... 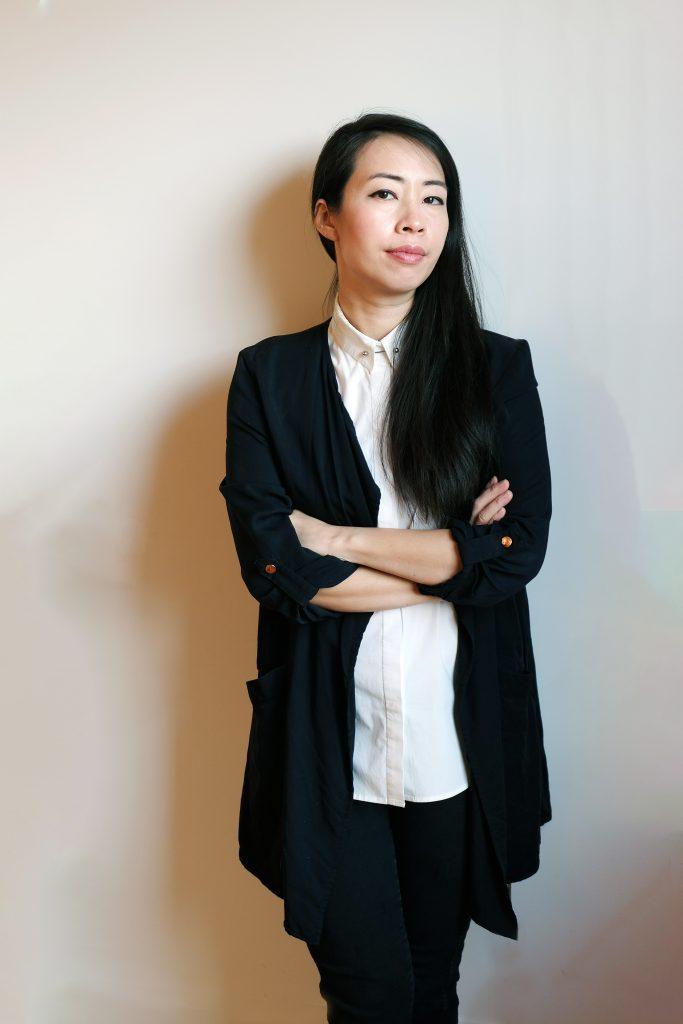 In 1970, a 25-year-old radical feminist named Shulamith Firestone published an incendiary manifesto called The Dialectic of Sex: The Case for Feminist Revolution. In it, she identified women’s role in childbearing as the primary cause of their ongoing oppression and proclaimed that “pregnancy is barbaric!”

Firestone called for the abolition of pregnancy and outlined a speculative utopian future in which women would be freed from the forced labor of biological reproduction via the development of artificial wombs. The nuclear family, which she viewed as fundamentally patriarchal, would be replaced by “households”: groups of adults who would share in the communal care of children.

Firestone’s ideas were controversial then and remain so today, not least because she failed to develop an intersectional understanding of women’s struggles; for instance, she neglected to acknowledge the way race and class have determined which women ultimately bear the brunt of reproductive care work. Despite these shortcomings, her work has remained influential with cyberfeminists, queer theorists, and xenofeminists, who have similarly looked to technology as a means of emancipating bodies from the tyranny of nature (as it says in Laboria Cuboniks’s : “if nature is unjust, change nature!”) and advocated for uncoupling kinship and care relations from purely biological definitions.

Ani Liu was reading Firestone while pregnant with her first child in 2019. An artist-researcher who had studied body-machine hybrids, cybernetics, and cyborgs at MIT Media Lab, she was well-versed in the theoretical and political frameworks for considering gender, gender stereotypes, and ways technology could allow individuals to transcend the limitations of biology. Nevertheless, she was unprepared for the radical changes her body underwent during pregnancy. The experience marked the beginning of her personal and artistic interest in exploring the relationship between the body, society, gender, and politics. 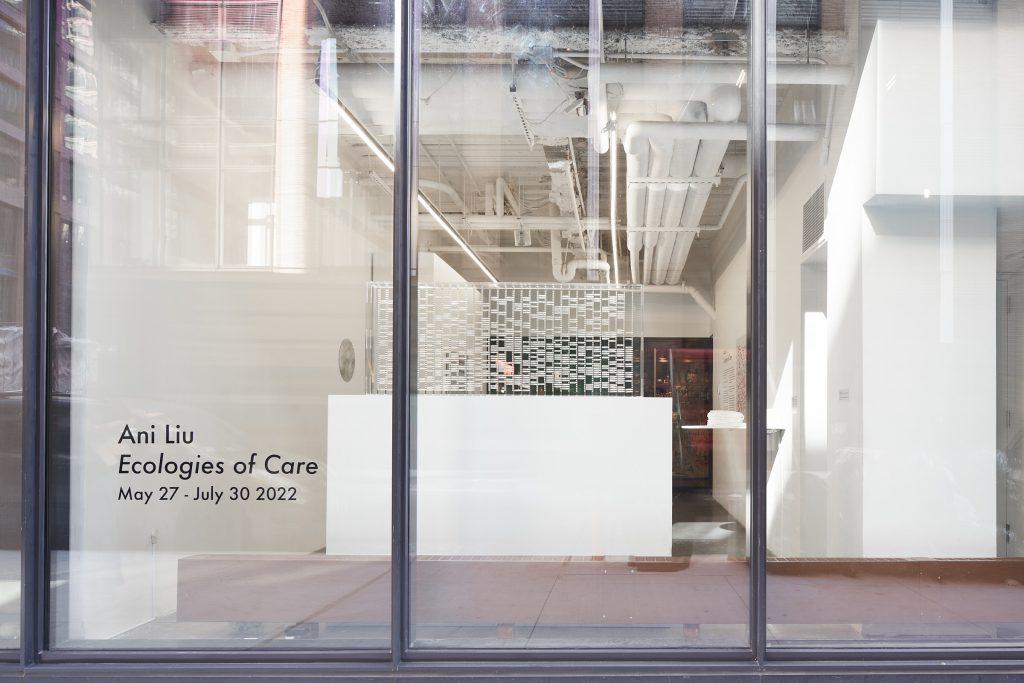 “At the time, I was reflecting on the fact that I felt like a human incubator and that society has a stake in that,” Liu told Artnet News. She cites declining birth rates in many countries and the promises those nations make to women in order to increase fertility rates, as well as the way they regulate women’s access to contraception and abortion. “I thought, why are we still doing this the old fashioned way?”

Following Firestone’s provocation, Liu began wondering what might happen if humans outsourced baby incubation to techno-scientific processes. She found that while the research is still a ways away from the fully functioning artificial wombs Firestone envisioned, science has made considerable progress. Incubators can now accommodate premature babies born as early as 20 weeks (full term is considered 39 to 42 weeks). As she looked into this research, Liu came across the concept of interspecific pregnancy, an experimental technique wherein one animal species carries the babies of another.

“It kind of blew my mind,” Liu recalled. “On Wikipedia, it said that we did this with cats where we impregnated them with pandas—because pandas are endangered and cute, so we feel like we want to help them. I was really fascinated by this. At the time, and recently, there was a lot of news about genetically engineering pigs for human organ transplants and so I looked immediately at a pig because it seemed like we already had a lot of research there.”

This line of inquiry led to the first work in her current solo show, “Ecologies of Care,” on view at Cuchifritos Gallery and Project Space in New York’s Essex Market (through August 6). The Surrogacy (bodies are not factories), which depicts a pig uterus inseminated with both pig and human fetuses, is the first piece that greets visitors as they walk in. Sat atop an illuminated vitrine, the sculpture glows, coiled into itself, looking slightly alien yet undeniably alluring. The bead-like bulbous forms made out of transparent, 3D-printed resin look like priceless jewels. While there is undoubtedly something anatomical about the form, it is only upon closer inspection that the milky white substance inside becomes recognizable as human and pig fetuses. 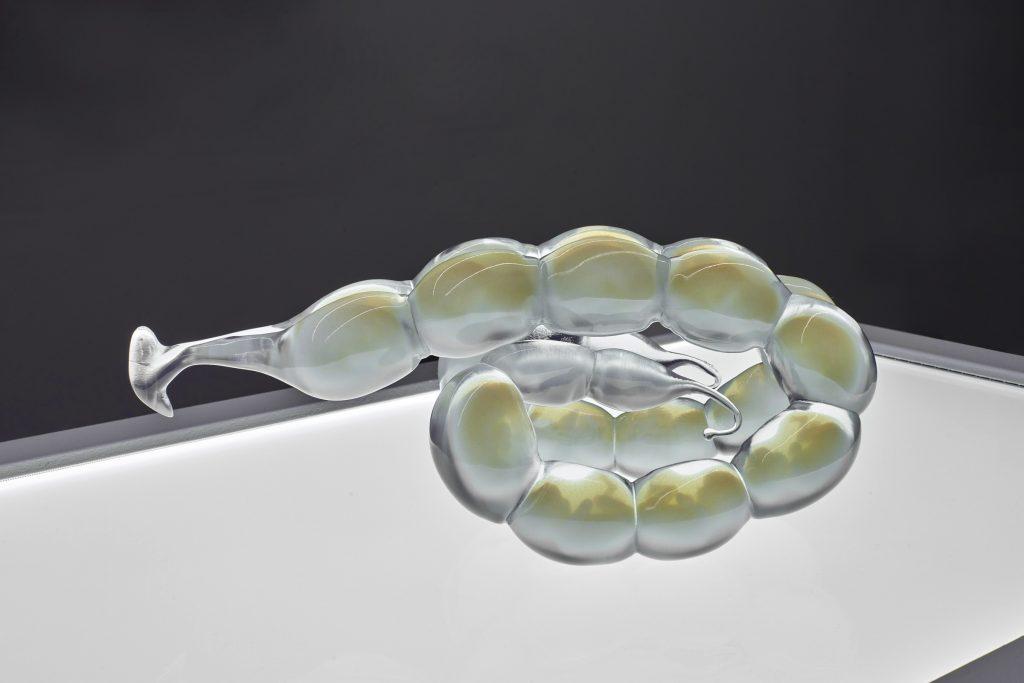 For Liu, the work raises questions of ethics in the exploitation of both human and animal surrogates. “In using the pig as a vessel, it felt almost like equating my own body with that of livestock,” she said. “I wanted to show that we don’t actually need artificial wombs, we really need better policies.”

The rest of the works in the show explore the materiality of maternal care work and the relentless demands of the postpartum process. In Untitled (labor of love), Liu presents a data portrait of the first 30 days following her daughter’s birth. The 60-by-24 inch acrylic sculpture is divided into 48 notches from top to bottom, each one representing a 30-minute increment. Some of these are fitted with tiny glass vials filled with breast milk, formula, and diaper fragments, representing each feeding and diaper change that took place. 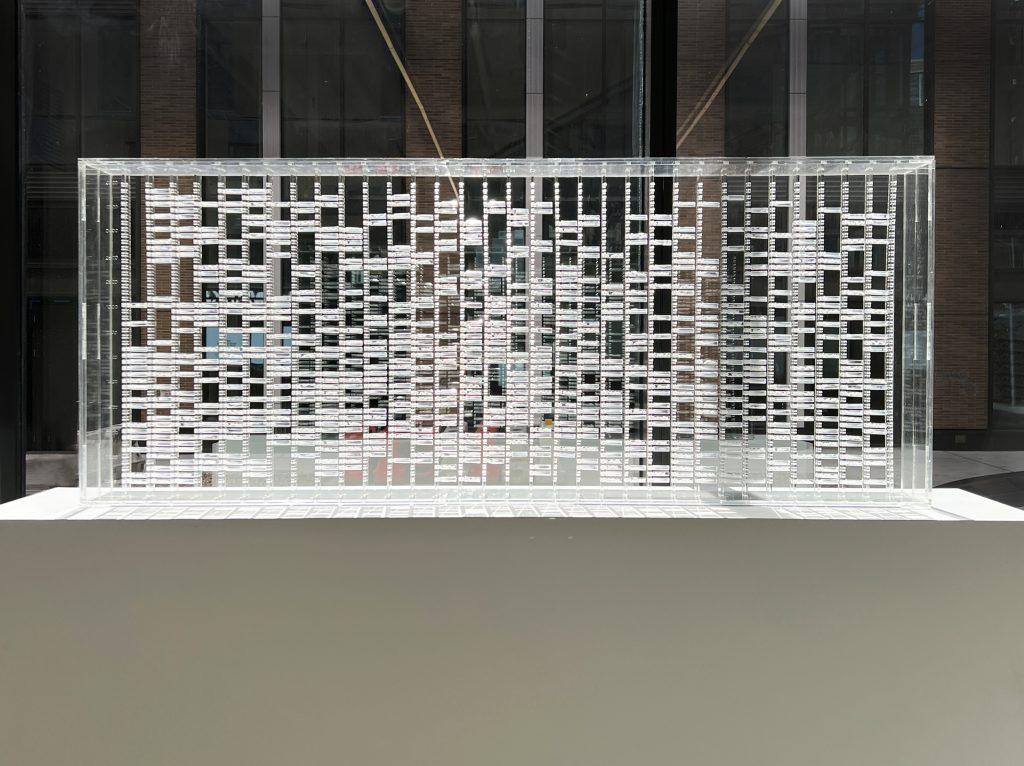 The pace is overwhelming and relentless and gives a sense of the round-the-clock labor required to keep a newborn alive. Liu started collecting the data to monitor her daughter’s health using a mobile app, a process that is likely to be familiar to most new parents. She was struck by the visualization of unrecognized labor it provided.

“I remember there were several times when someone was like, ‘Oh, it’s so nice that you get maternity leave. It’s like a vacation!’ and I would pull up the data and be like, ‘Welcome to my vacation!’ So I knew I wanted to fold this data into my art somehow,” Liu said. “I also really wanted to bring the materiality of my life into the gallery because it was what I was experiencing and you never see breast milk and diapers in these spaces.”

And there is plenty of (synthetic) breast milk in this show—about three gallons of it, to be exact. Shortly after giving birth to her second child during the pandemic, Liu had to return to work; she had not worked at her new job long enough to qualify for maternity leave. Since she had to be away from her child, she had to start pumping, and her symbiotic relationship with her breast pump became the inspiration for a pair of sculptures: Untitled (pumping) and Untitled (feeding through space and time). Both are made with food-grade tubing hooked up to a milky white acrylic box containing an air pump, a liquid pump, and a microcontroller. They circulate a milk-like substance Liu had to “sculpt” through months of trial and error to arrive at the right color and consistency. Untitled (pumping) sits perched on a shelf, neatly coiled, resembling a giant donut made of butter, were it not for the persistent sound of pumping and the sight of milk and air bubbles coursing through its tubes. Untitled (feeding through space and time) is arranged as a tangle of tubes on the floor, recalling the messy realities of childcare. Together, they are like the before-and-after images of the “how it started, how it’s going” meme. 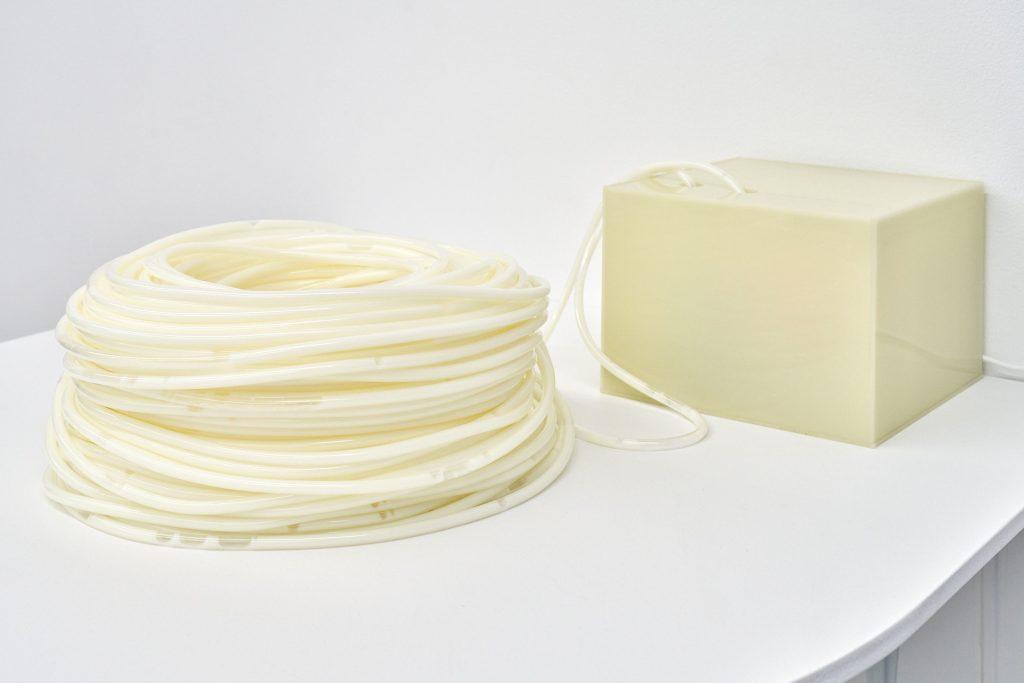 The rhythms of both sculptures are programmed to correspond to the rhythms of Liu’s breast pump and contain about a week’s worth of milk volume. Because Liu started working so soon after giving birth, and pumping as a result, she wasn’t able to establish a deep breastfeeding connection with her second child. The kind of physiological responses she used to have when feeding her first child (the mere sight of her daughter was enough to cause milk to start letting down) she now began having with her breast pump.

“All these Donna Haraway vibes came up for me—I am an animal-human-machine complete cybernetic creature,” she recalled. “There are a lot of hormones that go through your body when you lactate and I think mine were starting to become activated by the sound of the breast pump machine. I kept thinking about the relationship between me and the pump but also between the pump and society. On the one hand, the pump liberates the lactating person to be free of their baby’s mouth. It allows them to travel, work, do all kinds of things. But on the other hand, I feel like sometimes society gloms onto certain types of technologies to be like, ‘Oh look, you can pump! So you can return to work now, right?.’ But breastfeeding isn’t necessarily ‘free’ per se, it takes a lot of time and effort.”

During the pandemic there was a brief moment of acknowledgment that “care work is essential work,” but the return to normal has been swift and particularly ruthless, especially in light of the recent repeal of Roe v. Wade and the ongoing attack on women’s reproductive rights.

“I’ve always been an advocate of choice and abortion rights but I felt even more strongly about it after I became a mother,” Liu said. “I wanted this and it’s still so hard. No one should have to be forced into this.”