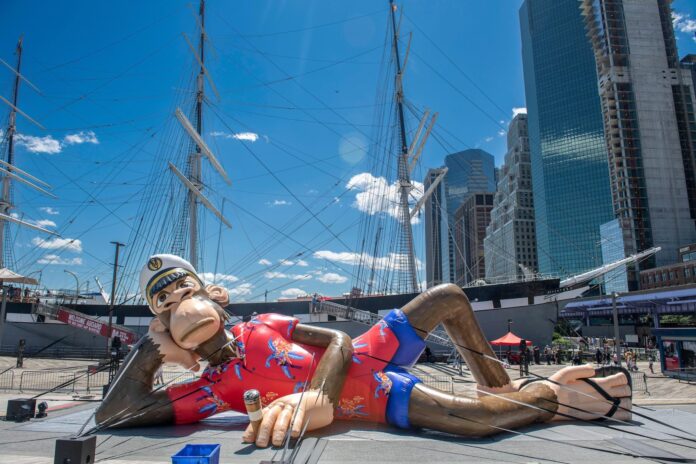 NFT.NYC, the NFT (non-fungible tokens) industry event that opened on Tuesday, has announced the winners of its second annual NFT Awards. They include Takashi Murakami, who won the Best Traditional Artist turned NFT Artist category, and Beeple, who was named Best Established NFT Artist. Claiming four categories was Bored Ape Yacht Club, the NFT collection of apathetic cartoon apes that counts among its holders celebrities like Gwyneth Paltrow, Justin Bieber and Tom Brady.

The awards, which occurred on the second day of the fourth annual New York–based conference, cover more than 30 categories in areas from visual art to gaming to fashion. Bored Ape Yacht Club, which launched in April 2021 and broke $2bn in all-time sales in just over a year later, took the title of Top Collection by Sales Volume, while digital horse-racing platform Zed Run and the series My Curio Cards won, respectively, Top Collection by Transactions and Top Art Collection by Volume. Bored Ape also received the awards of Top Collectibles Collection by Volume, Most Innovative NFT Project and Best NFT Business Model.

While multiple awards were given to recognise different media, blockchains and industries, only one exists for geographic regions: Highest Volume Collection from Asia. The accolade went to Murakami.Flowers Seed, a 11,664-strong NFT collection by the Japanese artist launched in March after a year of delays. Images are sold as seeds, which will become flowers that are revealed at new drops.

Murakami has apologised multiple times for his collection, first for the timing of the drop with the crash in cryptocurrency prices. In early June he wrote to his fans on Twitter: “Dear holders of http://Murakami.Flowers, I appreciate your continuing patronage, although the project’s floor price and transaction prices remain stagnant. I am very sorry.” This week on Instagram, he alluded to the stress of the project, writing: “Ever since I released my NFTs, I’ve felt as though I am being cornered day after day. I keep checking and rechecking tens of thousands of images to make them into works that wouldn’t embarrass me after my death.” When his studio received news of his NFT.NYC wins, Murakami posted again to share his gratitude. He wrote, “With such an acknowledgement, I feel our long stretches of all-nighters have paid off!”

Winners of certain categories were determined by analysing volume data and transactions on OpenSea, which sponsored the NFT Awards with the APENFT marketplace and NFT.Kred. Community voting determined the victors of subjective awards like Best NFT Artist, which went to the London-based XCOPY, whose looping visuals explore themes of death and dystopia.

All winners will have their art shown in a gallery at the Marriott Marquis throughout NFT.NYC, which ends on 23 June. It is one of seven venues hosting the event, alongside Radio City Music Hall and Margaritaville Resort Time Square.

Despite the plummet in token prices and spike in scams and thefts in recent months, more than 15,000 people are in attendance this year, up from more than 5,000 in 2021. Registration is still open, with last-minute general admission tickets starting at $849.

Opium Traces Found in 3,500-Year-Old Pottery Shows That Ancient Canaanites May Have Been the First Humans to Use Psychoactive Drugs