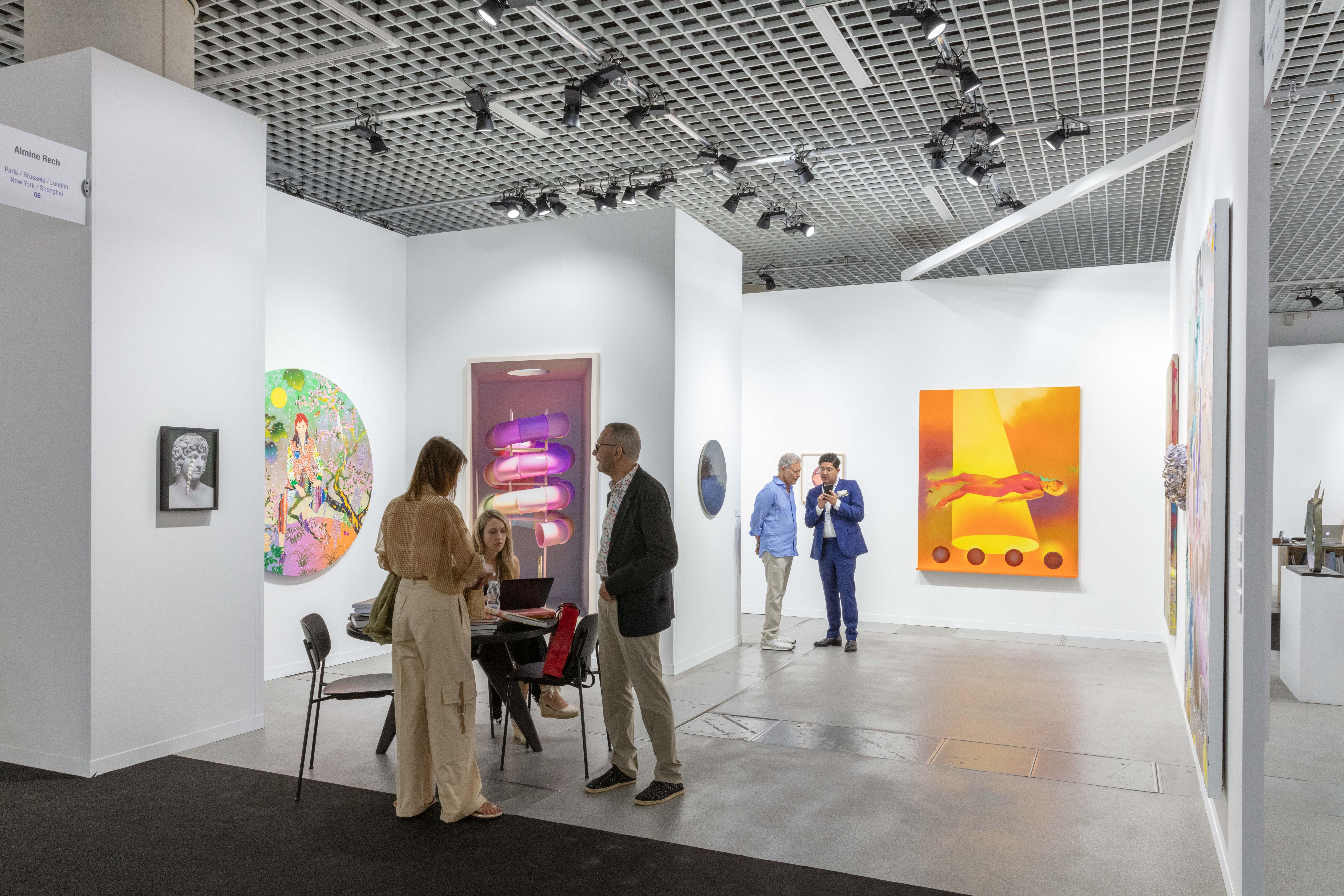 The sixth edition of Artmonte-Carlo (until 16 July) in Monaco opens to the public today, bringing 37 international galleries, among them blue-chip outfits like Hauser & Wirth and White Cube to the sovereign city-state and tax haven for the super rich. After a massive, pandemic-induced drop in exhibitor levels (2019’s edition counted 73 galleries, 2021 included just 27), it seems that the fair’s boutique—but highly selective—flavour is here to stay.

Taking place at the Grimaldi Forum—a glass atrium near the harbour—the atmosphere at yesterday’s preview was more reflective of the bon vivant sensibility of the Mediterranean coast than the frenzy of most art fairs. Prince Albert II of Monaco was given a private tour flanked by burly security guards while regional collectors like Marc and Jose Gensolen and Herve Lebrun, from Marseille, rubbed shoulders with Bernard Ruiz-Picasso, grandson of Picasso. But does a slower pace make for robust sales?

Counterintuitively, and unlike many other fairs, it seems that Covid-19 might have benefitted Artmonte-Carlo. The onset of the pandemic spurred a number of galleries and auction houses to open outposts in affluent areas where clients are based, literally bringing art directly to the doorsteps of collectors. True to form, Sotheby’s last week announced it would expand its pop-up salesroom in the city into a permanent space. And Christie’s will next month host a selling exhibition of art and jewellery at the Cipriani restaurant (3-18 July). With galleries such as Hauser & Wirth having also opened spaces in town, it begs the question: Could we be seeing the beginnings of a burgeoning—if not incredibly gilded—art scene on the French Riviera?

The answer is yes, according to White Cube’s senior director Mathieu Paris, who has attended two other editions of the fair. By the end of the preview day, the gallery sold an Antony Gormley scupture ROOT to an Asian buyer for £200,000; a new work by Ibrahim Mahama sold to a “prominent” private collector from Monaco for €100,000.

“Monaco always been a meeting place for people from the entire world. So in Artmonte-Carlo you will have German, Swiss, American, French and the English. Obviously, this year, a bit less Russians though many still live in Monaco as well as Ukranians” Paris says. “This time of the year is extremely attractive for Americans who have not travelled for a long time.”

Tang Contemporary Art, which has locations in Beijing, Hong Kong and Bangkok, sold two small Zhu Jinshi paintings for each for $70,000 by the end of the preview day. And Hauser & Wirth sold a George Condo painting for $900,000 and a 2021 pencil, acrylic and vinyl on cavas work by Takesada Matsutani for $175,000.

Speaking to the fair’s appealing nature for the principality’s time-poor but high-net worth residents, Alessia Calarota of Galleria d’Arte Maggiore says. “There are many entrepreneurs who work internationally but live in Monte Carlo, who don’t have so much time to go around for art fairs. There are so many in this moment in the world.”

The German collector Julia Stoschek echoes this sentiment: “What I love is that this is a more exclusive and smaller art fair. It’s a very good program and well curated. You can make it round in one hour and see good art without reaching overload. Quality over quantity.” Minutes prior she had bought a Rob Pruitt sculpture for $39,000 from Air de Paris’s stand.

Stoschek is here not just to buy art, but to exhibit it too. Her eponymous collection that she founded in 2007 is staging a video art exhibition within the fair that includes films by Chloe Wise. Artmonte-Carlo is able to pay for this from financial support its organisers receive from the principality’s government, which is spent on bringing special exhibitions to Monaco, as well as on “attracting collectors to come and do different promotional events during the year,” says the fair’s director, Thomas Hug. The Swiss entrepeneur adds that part of these events include “artistic ones on yachts, for example, during the [Monaco] Yacht Show”.

This is one of the several intitiatives masterminded by Hug, who works closely with co-director Laura Meillet. The pair also spearheaded Artgenève and the Nightfall festival, which in its inaugural edition brought together art and gastronomy in Paris in June.

Another tactic that has been well received is that regarding fair stands. Gallerists are each given 40 sq m booths—all stands are intentionally the same size. They are priced between €400 and €500 per sq m. According to Hug, the lack of variation in stand cost was intended to make more space available for younger galleries who might otherwise be priced out by established dealers. The move has been well received by the gallerist Andrea Caratsch from St. Moritz, Switzerland who praised it as “democratic”.

And while the collectors and institutional heads present at this year’s Artmonte-Carlo might not be of the highest pedigree—at least when compared to those attending fairs such as Art Basel and Frieze—their deep pockets are also matched by genuine curiosity. As Caratsch puts it: “Visitors here are curious about learning new things and the artists. I find they don’t necessarily know what they are looking at, but they walk towards it because they like it which I find refreshing.”

For US collectors buying in London, the dollar’s strength may be their only advantage