Home News What Art Does Demi Lovato Collect? Here Are 8 Artists and Designers... 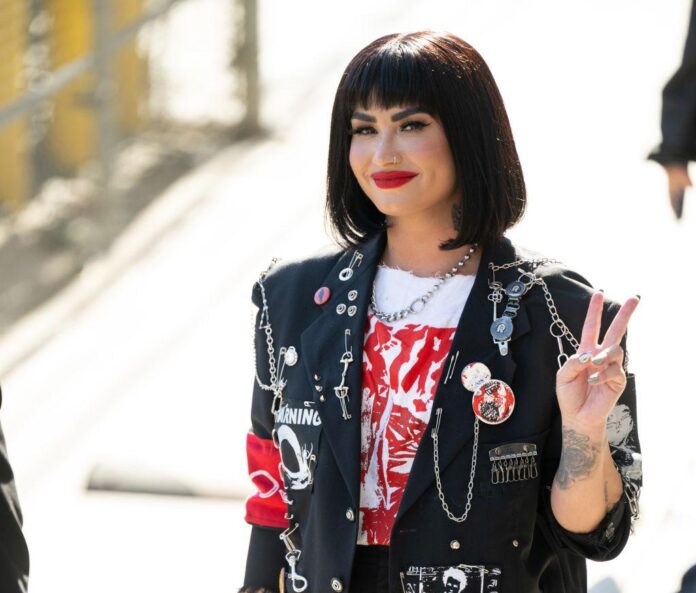 Demi Lovato has helped define a generation of pop cultural, appearing alongside Selena Gomez on the children’s television show during the 1990s, and on Disney Channel’s zeitgest musical opposite the Jonas Brothers in the next decade.

As her contemporaries—think Miley Cyrus and Taylor Swift—redefined themselves in the 2010s, Lovato kept it real. She stayed honest about her struggles with mental health while branching out to focus not only on her music, but also her ties to visual art.

Sound artist Christine Sun Kim signed the national anthem alongside Lovato at the Super Bowl in 2020, and earlier this year, Lovato even sparked a dialogue about antiquities after unboxing some Egyptian artifacts she had purchased.

Most notably, however, Lovato made headlines this week when took an unprecedented look into her “trippy modern-day farmhouse,” and her vast collection of art and furniture. Lovato hired Argyle Studio and the Museum of Contemporary Art in L.A.’s communications director Eva Seta to curate her personal collection, which includes works by legends like Mies van der Rohe alongside emerging voices like Lilian Martinez and Lola Rose Thompson.

“I wanted it to be a very queer environment,” Lovato told . “There’s a lot of female empowerment as well, so keeping pieces that are representative of the female figure was very important to me. We live in a world that shuts you out of honoring female bodies, so I want it to be in your face in my house.” (Lovato has come out as non-binary and used they/them pronouns in 2021, recently returning to she/her.)

Though Lovato has auctioned her own clothes a few times to support social justice, there are few instances of her attending art sales and fairs. So we combed her interview with  and social media to bring you eight artists in the musician’s visual art collection.

Ok folks, Demi Lovato posted a series of ancient artifacts that they bought online. We’re teaching our International Heritage Crime course this week, so the timing could not be more perfect. Let’s discuss the antiquities trade, authenticity, and cultural heritage exploitation. pic.twitter.com/k43Y9WeVjv

Lovato made waves as an art collector earlier this year, when she posted videos of antiquities she ordered through a site called “Museum Surplus.” Archaeologists like Peter Campbell got involved, questioning the certificates of authenticity she showed the in the video, which omitted export documents and other critical hallmarks of provenance to prove the veracity of— let alone the ethics in acquiring—the various Egyptian figures and Assyrian cuneiform tablets she amassed, dating back to 2,000 B.C.E. 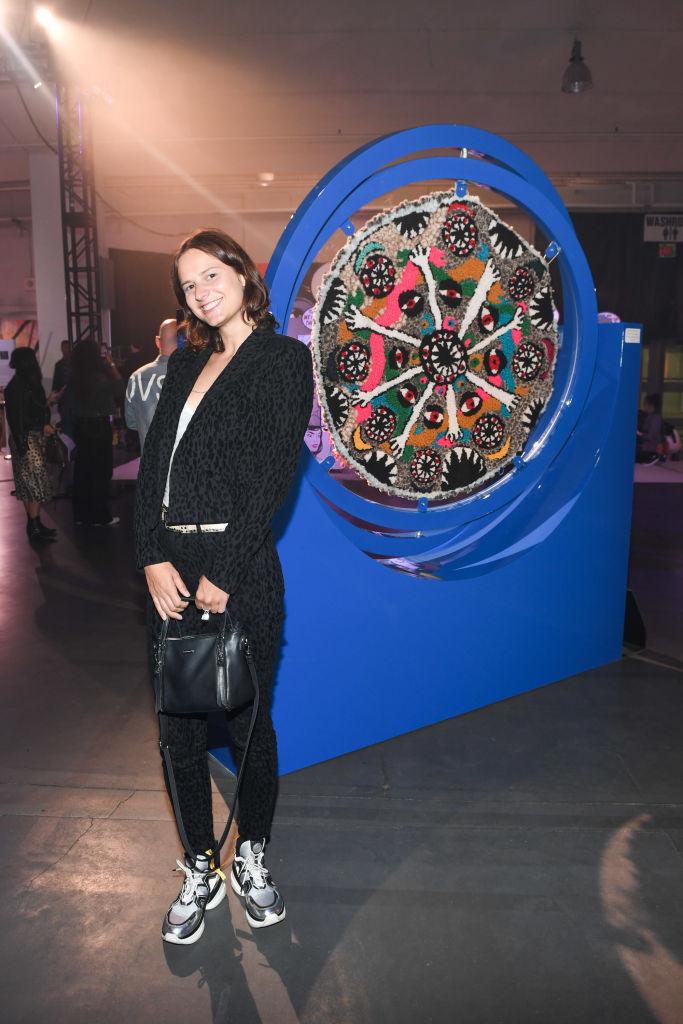 reported that Lovato rarely uses her reception room—but that didn’t stop her from going all out on her house’s entrance. A textile work titled by Canadian-born Hannah Epstein anchors the space. There’s a lot to hold down too, including expanses of Porter Teleo’s wallpaper and set of unidentified gilded flowers, perhaps by the same designer who created the bronze palm tree lamp close by.

just demi lovato in their shroom room, hosting a podcast, being their happy, authentic self. i can’t put into words how proud i am, it’s an understatement. pic.twitter.com/pO3gjTGzo7

Fans of Lovato will easily recognize the musician’s “Shroom Room,” a trippy rec-room where she records her audio-video podcast. However, shows that just beyond the camera frame, a ceiling mural by Jen Stark crowns a color-changing cirrus cloud light fixture by Washington, D.C.-based designer Rania Peet. “My favorite room in the house has been and probably will always be the Shroom Room,” Lovato told AD. “It’s such a fun experience when you walk into it.” 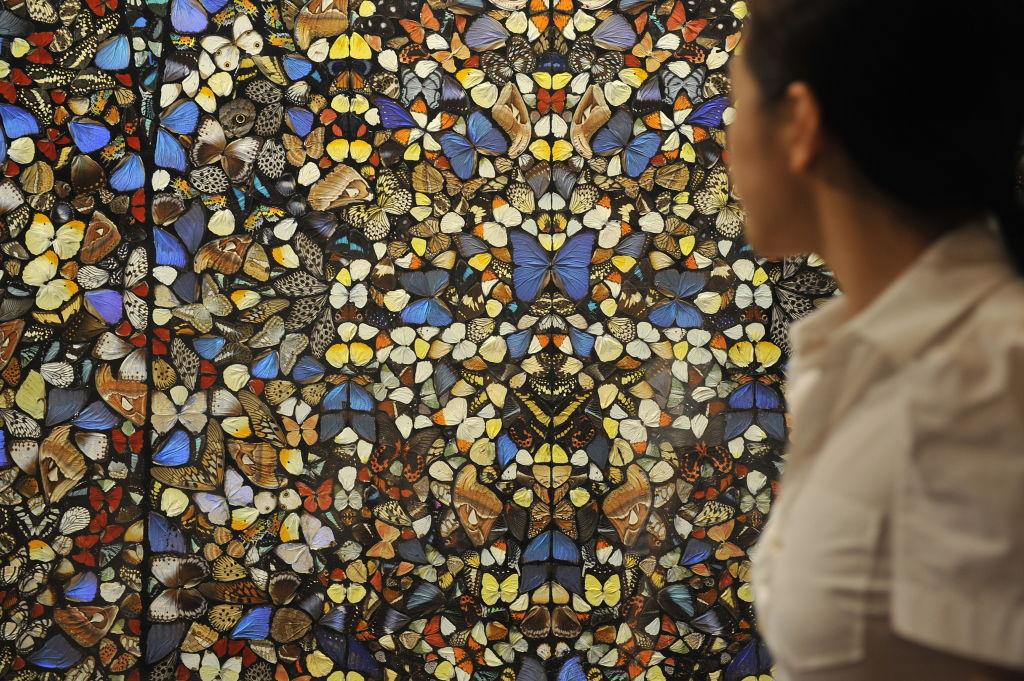 A woman walks past by Damien Hirst. Photo: Mike Clarke/AFP via Getty Images.

Though much of Lovato’s artwork remains true to her intention of elevating female forms and perspectives, a global celebrity clearly has to hold on to their blue-chip cache. Enter mega-artist Damien Hirst. Butterflies are one of the British superstar’s favorite subjects, and a great fit for Lovato’s lifelong mission to spread her wings. As such, she’s framed and stationed a single butterfly spin painting by Hirst above a daybed on a mezzanine level overlooking the main floor. 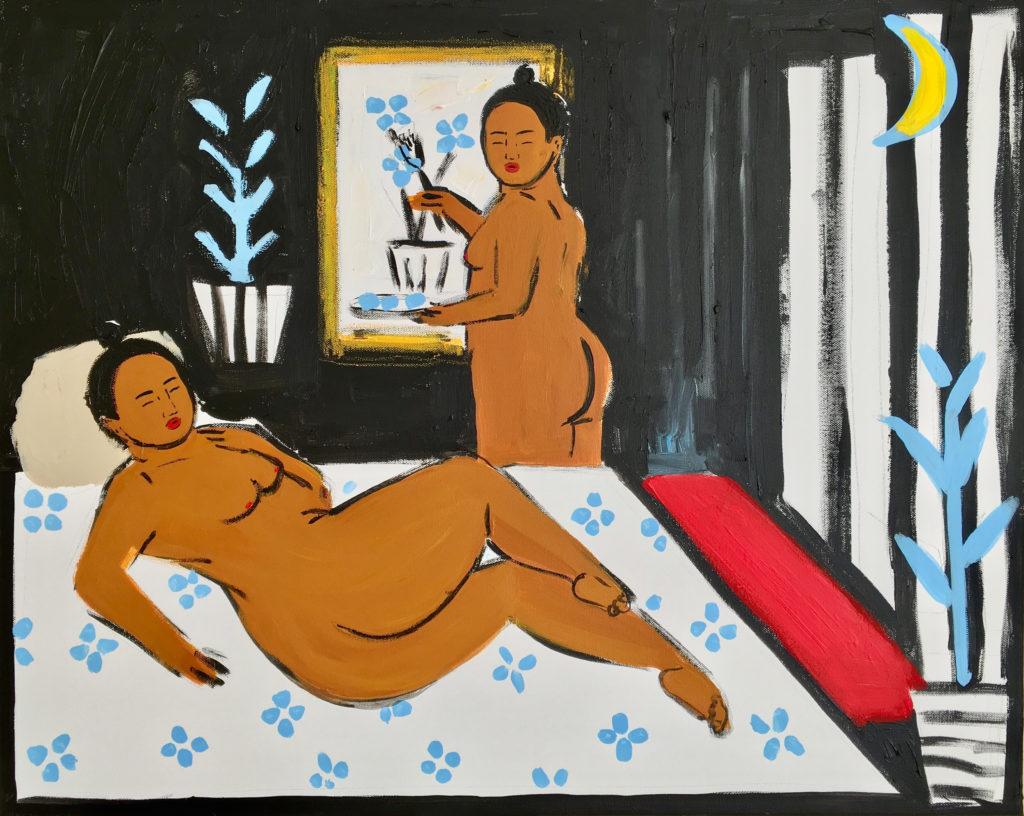 Just a stone’s throw from Hirst’s work, Lovato’s lofted hallway also features a striking study in duality by Monica Kim Garza called . Both figures in the bright work seem to be jumping at a net, turquoise thong bikinis on but topless, reveling in the athletic abilities their bodies present. Between the color and motion, it’s a fitting reminder that these vessels aren’t just ornaments, but instruments. says it’s one of Lovato’s favorite works in the house. 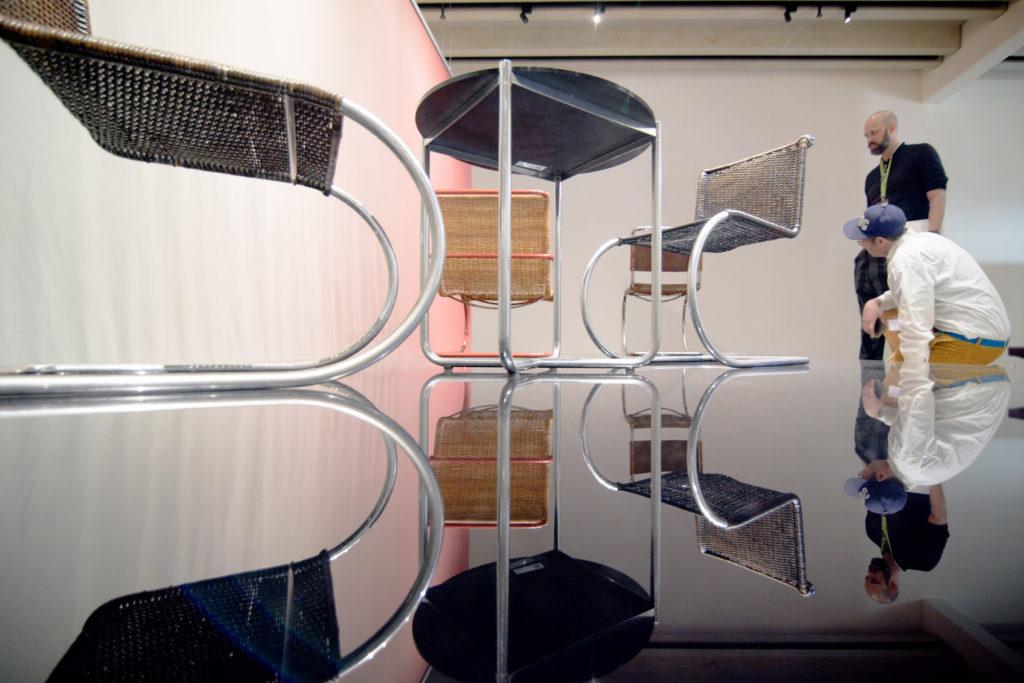 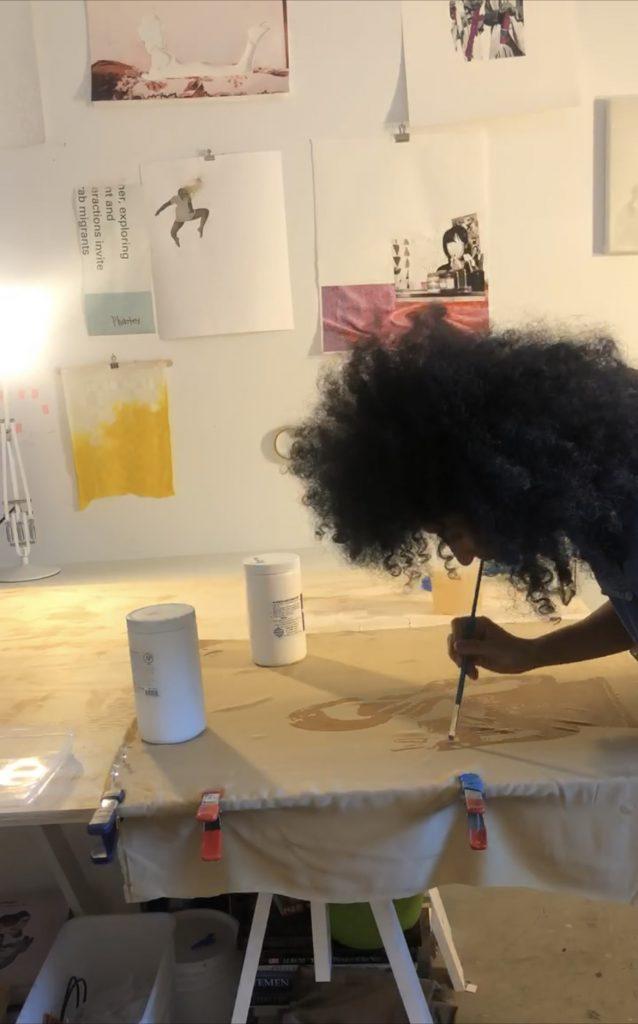 Yasmine Nasser Diaz at work in the studio in 2021. Courtesy of the artist.

Given Lovato’s tenuous (and highly relatable) relationship with food, it’s critical she creates a calming atmosphere in the place she eats. showed that  by Yemeni-American artist Yasmine Nasser Diaz takes center stage in Lovato’s dining room, where the walls are painted something between periwinkle and slate gray. A pair of wall sconces by Ingo Maurer surround the work, resembling seashells and evoking the serene sound of waves and water.

In the spirit of everlasting reinvention, Lovato deleted every image on her Instagram earlier this year. Now, her first post features herself surrounded by collaborators in the studio with a simple caption that says: “A funeral for my pop music.” On the far right, we spotted an abstract yellow and purple painting—resembling a cracked open geode, and perhaps by the German artist Kerstin Bräsch. While there’s no concrete evidence to support our suspicion, Bräsch’s CV says she showed work at the Museum of Contemporary Art in L.A. in 2012, so it’s certainly likely that Seta at least would be familiar with her work. The artist’s focus on spirituality also suits Lovato’s tone.

What is the future of art? Digital over physical?