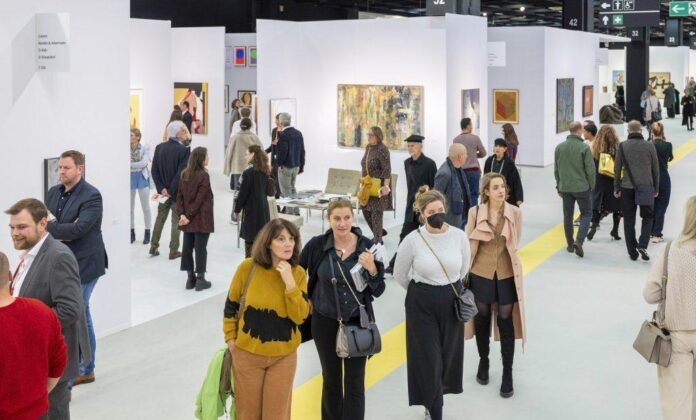 This year finally marked the first real post-Covid comeback for Art Cologne, which wrapped up its five-day run on Saturday, November 19, expanded and back to some kind of “new normal” after an inevitably downsized edition last year. Despite the fresh start, some pandemic-related changes are here to stay, most notably scrapping the fair’s old April slot in favor of a new date which fair director Daniel Hug said “fits well in the worldwide art fair calendar.” Presumably, it also avoids too much direct competition with other regional fairs like Art Brussels, which takes place in the spring.

There is also a greater emphasis on space, which is easily accommodated by the mammoth exhibition centre in Cologne. A new layout offers 5 meter-wide (16 foot) aisles and breezy plazas, intended to house large sculptures but also to put those still in favor of social distancing at ease. Possible routes were suggested by colorful paths marked out on the floor.

The preview was also spread across two days, a safety measure that, Hug suggested to Artnet News, “made for a very relaxed preview, too relaxed for many.” 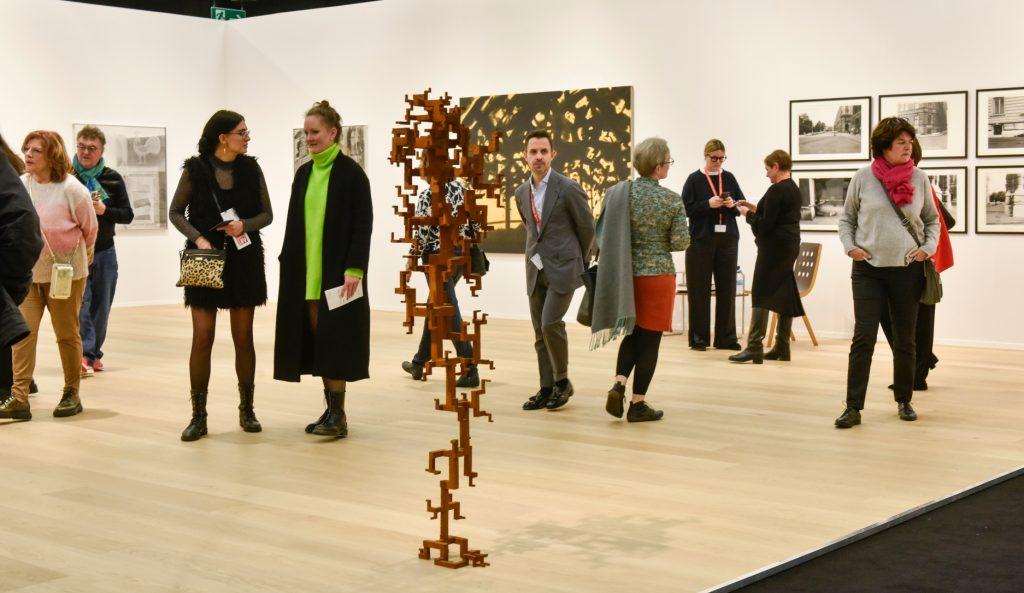 The crowds may have stayed relatively tame on those preview days, but the weekend boasted a 50 percent increase of attendance as compared to the year before. Overall, the fair welcomed 43,000 visitors. This doesn’t quite match the fair’s pre-pandemic heights of 57,000 in 2019, but exhibitor numbers have bounced back to approximately 190 after a dip to 140 last year.

This increased participation may reflect the waived costs of renting a booth, of which about a third is being covered by the German government as part of ongoing pandemic recovery funding for the culture sector.

The other major headline this year was the successful merger between Cologne Fine Art & Design and Art Cologne (both of which are owned by the same parent company; the former is dedicated to traditional arts and antiques. The design fair is now nestled now under the wing of Art Cologne, appearing as its newest section, Art + Object. The range of objects on offer at Art Cologne have therefore been extended beyond contemporary and modern to include Old Masters, design, applied arts and crafts, and antiquities. 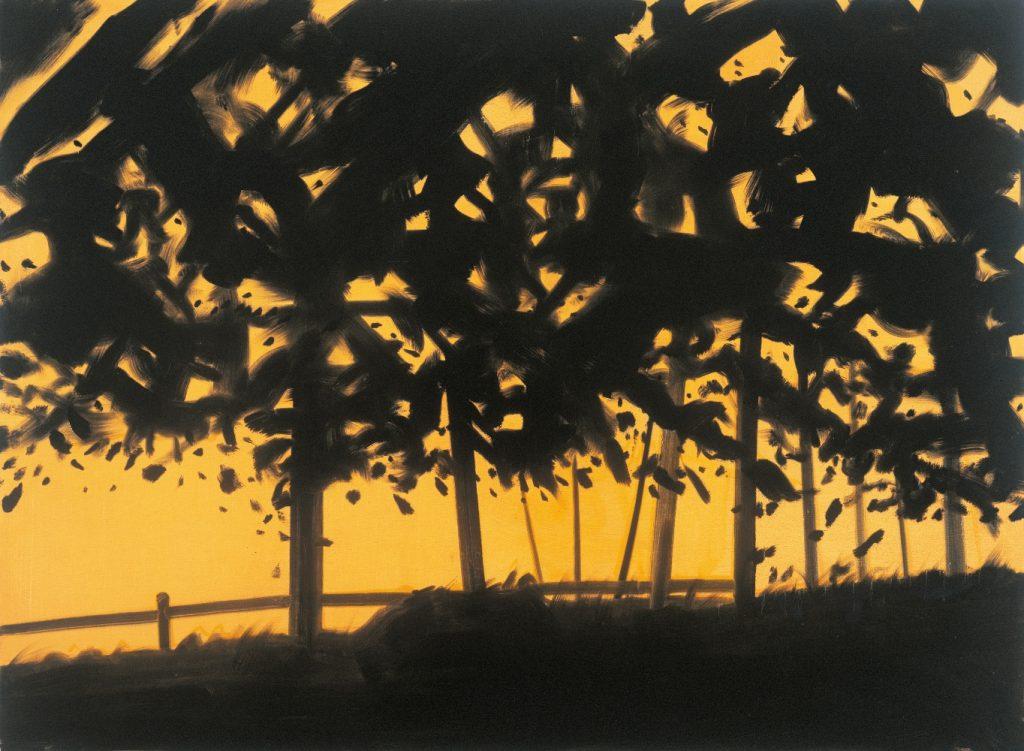 All the same, contemporary art continues to steal the show. Galerie Thaddeaus Ropac sold a stark orange and black landscape by Alex Katz for €950,000 ($973,250). “We are noticing an increased interest in works by Alex Katz at the moment, which is certainly partly owed to his current major retrospective at the Guggenheim Museum in New York,” Patricia Schmiedlechner told Artnet News. “We take part in the fair every year,” she added, noting “the presence of so many high-profile art collections in the area.”

Another painting by the German artist Imhof fetched €140,000 ($143,500) at Galerie Daniel Buchholz, which also represents the artist. 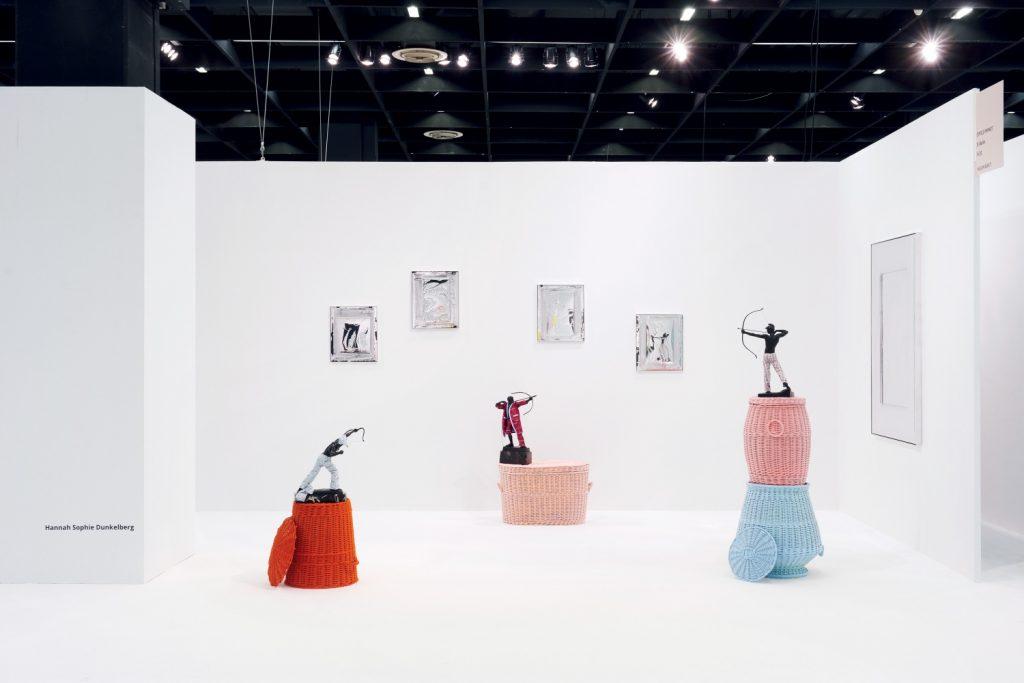 Emerging galleries participating in the Neumarkt (translated: New Market) section were sprinkled through the contemporary floor rather than sequestered off into a distant corner. Johnanna Neuschäffer of the Berlin gallery Office Impart, told Artnet News, “young galleries felt very naturally embedded in the fair.” Works from their solo show by German artist Hannah Sophie Dunkelberg sold within the price range of €3,800 and €19,000 ($4,000 and $19,500).

Exhibiting for the second time, also in Neumarkt, Tallinn-based Temnikova & Kasela gallery presented the Estonian artist Flo Kasearu. They offloaded their centerpiece the large scale sculpture Uprising (An Aircraft), among other works to the overall tune of €30,000 ($30,750), plus tax. Each sale marked a new encounter with a local institution or collector made through the fair.

Worth noting also is the participation of Voloshyn Gallery from Kyiv, Ukraine, who brought watercolours by the Ukrainian folk artist Maria Sulymenko, on offer for between €1,600 and €8,700 ($1,160 to $6,300). It has plans to open an exhibition in December at its space in the Ukrainian capital despite this year’s attacks by Russia on the Ukrainian capital.

Of the pre-war offering at Art Cologne, “German Expressionists are the big hits,” noted dealer Laszlo von Vertes. “There was a great demand and we made considerable sales,” he said. His Zurich gallery received much attention for its display of museum quality works by Monet and Gerhard Richter, but he nonetheless highlighted the sale of a significant work by August Macke.

“Despite the crises, there is a great demand for art, which is in fact a solid investment,” von Vertes concluded.

Houston Looks to Mexico for Artists and Art