New York and the United States as a whole are the center of attraction for many creative people who come here to work and study from around the world. Not surprisingly, since the 1960s, New York has become the world capital of contemporary art. Artists create bold projects here, and the art infrastructure provides many of them with the opportunity to present their work to the public both in the United States and beyond.

Five US cities that have unexpectedly become points of attraction for young artists and fans of contemporary art. 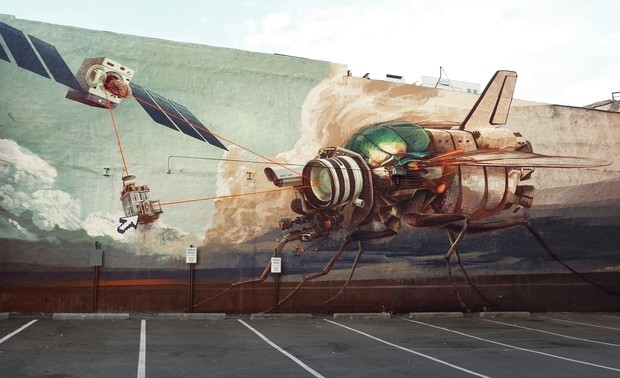 Thanks to Shane Pomajambo of Blind Whino SW Arts Club, a non-profit organization and gallery in Washington DC, Richmond became the capital of American street art in 2012.

It was then that he moved his G40 Street Art Festival from the capital to the Richmond Art District. Every year, Pomadjambo invites ten artists from different parts of the world to paint the walls of the city for two weeks. 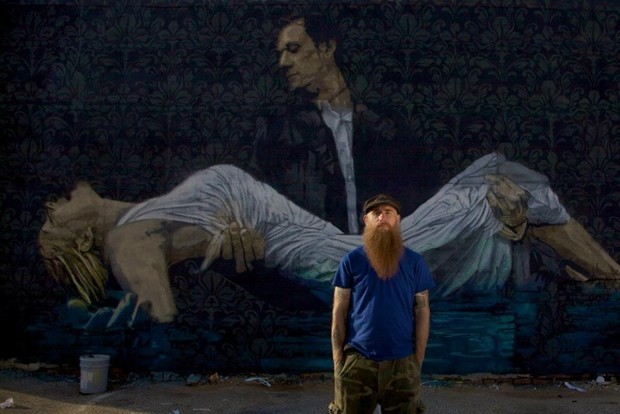 Baltimore’s once prestigious downtown neighborhood adjacent to Penn Street appears to be in decline. It housed the offices of many companies that have disappeared over the past 15 years due to the economic crisis. However, enthusiasts from the group Station North Arts and Entertainment decided to fix the situation.

Vacant industrial sites have been converted into a Baltimore Design School and two studios for young artists. Nearby, Louis Rosenfeld, founder of the Rosenfeld Organization, is promoting his Graffiti Alley graffiti project. Any artist can come here to leave their artistic mark – and it is perfectly legal. The graffiti alley is the only place in the city where street art is encouraged. In the photo – artists against the background of their works. 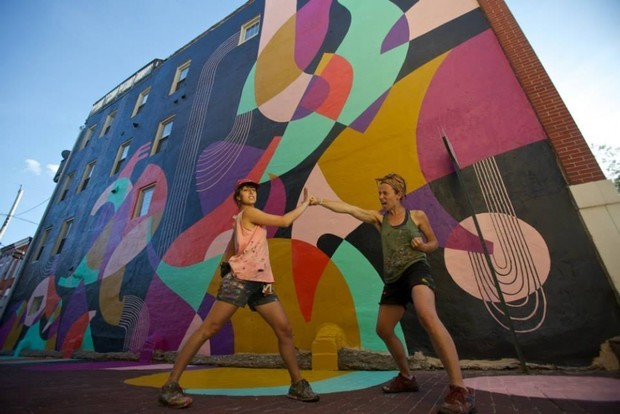 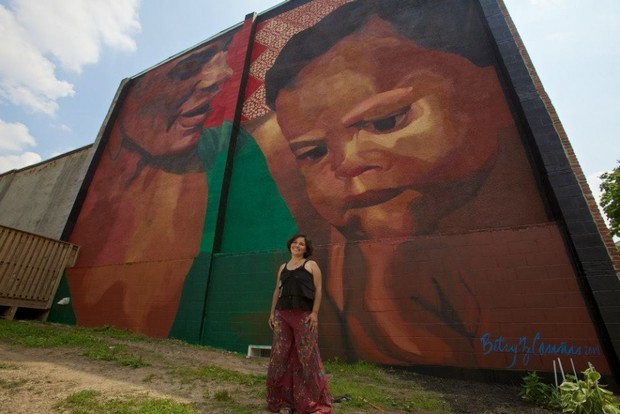 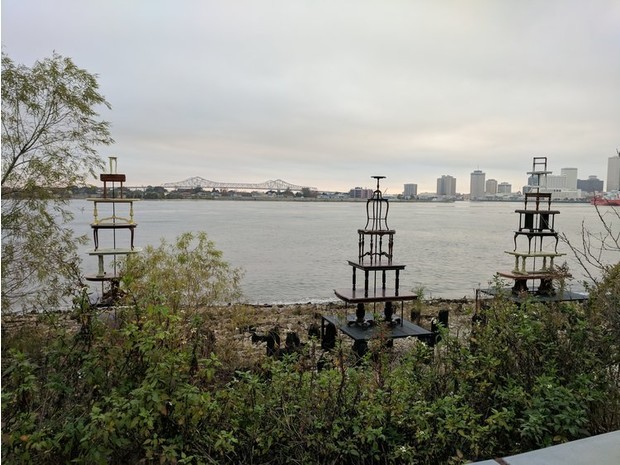 The birthplace of jazz, New Orleans has recently claimed the status of the capital of contemporary art thanks to the 2007 Prospect New Orleans art triennial.

The fourth art intervention officially ended on February 25, 2018; the next one is scheduled for the end of 2020. This time, 73 artists were worried about social and natural disasters.

The instrument should remind of slavery and music born of this tragedy. Jennifer Odem’s furniture installation draws attention to the problem of rising sea levels. 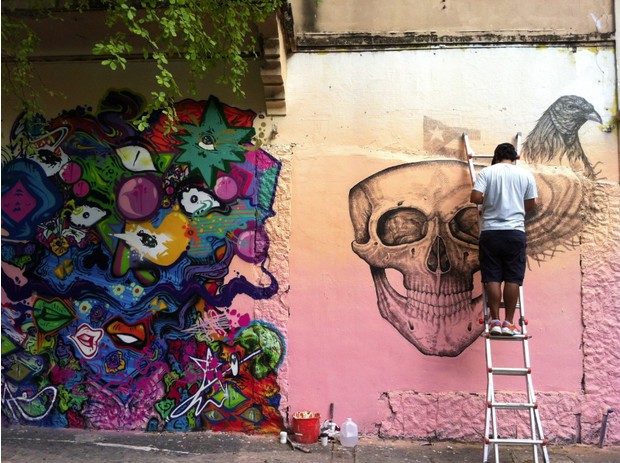 Despite the fact that Santurs is only 15 minutes from the city center, by the 1990s, it had completely turned into a slum. In 2009, this place was chosen by local young artists, who gradually turned the area into a real art cluster.

The walls were decorated with graffiti, hipster bars opened. Today, here in the center of Santos, eight streets have become a street art museum. 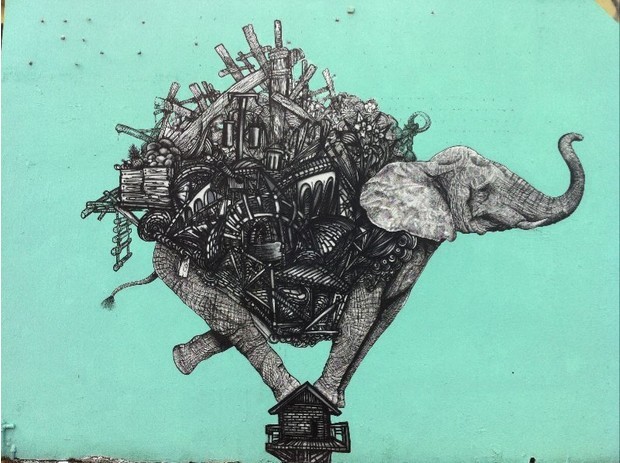 The author of Game of Thrones George Martin, in 2015, contributed to the emergence of another house. The group of artists Meow Wolf created an interactive project, The House of Eternal Return. On the territory of 20,000 sq. m of the former bowling club, the artists created a large-scale installation-quest.

Interactive walls and ceilings, elements of VR reality, robots, and architectural tricks immerse the viewer in a surreal world, where he will have to learn (or maybe not) the secret of the disappearance of the Victorian family.

The place has become so popular that the once-sleepy Santa Fe district has become a point of attraction for geeks and connoisseurs of contemporary art.

In the 1960s, Andy Warhol turned his studio in New York into a Factory, or rather, organized a workshop in an industrial workshop. The Factory changed its address four times, but these were always large spacious spaces. There, Warhol put the production of work on the stream, involving in the process numerous assistants who did the monotonous work, replicating the images in the silk-screen technique.

Andy Warhol’s Factory very quickly became not only a production site but also a cult place, where many aspired to go. At constant parties, one could meet Mick Jagger, Truman Capote, Bob Dylan, Jim Morrison, and other famous guests. The Factory became the birthplace of unique projects and collaborations, such as Warhol’s arthouse films or the production of the art-rock group The Velvet Underground.

Much of what was created by Warhol and was an innovation, decades later in the modern American and world art industry has become a quite common phenomenon. Contemporary artists often work in industrial-sized workshops, employing entire teams of specialists.

For example, in the studio of the contemporary American artist Jeff Koons, whose sculpture “Rabbit” in 2019 was sold at Christie’s auction for $ 91 million, hundreds of specialists of various profiles work.

This is a structured company where everyone is responsible for their own area of ​​work. In the paintings department, in particular, famous works of the Italian Renaissance, Baroque and conceptual elements to them are recreated, which create new meanings and versions of the reading of the classics.

In Koons’s studio, you can meet young representatives of modern art who are gaining experience and those who need to earn money in order to continue their personal creative path.

The art industry is constantly evolving, and roles are being redistributed. At the end of the nineteenth century, the opinion of an authoritative art critic contributed to the advancement of the artist, who was immediately picked up by dealers and successfully placed in the collections of their clients. Now, collectors rarely buy artwork directly from artists, mostly through dealers and gallery owners.

Therefore, it is so important for an artist to find a gallery that will work with him and present. As a rule, gallery owners in New York are open to dialogue.

The influence of art dealers, who in most cases, own galleries both in the United States and in other countries, depends on the number of significant, successful projects, connections with collectors, and the ability to shape the market of contemporary art.

For example, Loy Holloway’s works skyrocketed in value after she signed a contract with the influential Pace gallery.

Collaboration with a systemic art dealer often creates an additional burden for the artist: he should be included as much as possible in a series of events that perform a marketing function.

As a rule, galleries do group or solo exhibitions of the artist, as well as exhibit, works at various art fairs: from large international ones, for example, Frieze Art Fair and Art Basel, to local and small, which usually take place almost every week in different countries of the world.

Such exhibitions, in most cases, are a source of income and attracting new clients to the gallery. For example, about 300 successful galleries from all over the world take part in Art Basel.

This concentration is very attractive for collectors, independent dealers, curators, and critics because, at such trade shows, thousands of works by completely different artists are presented under one roof at the stands of leading galleries of modern art.

This allows collectors and independent dealers to discover new talent, find and acquire what they have long wanted.

At art fairs, there is a large traffic of profile visitors, which allows gallery owners to find new partners and conclude deals.

Multimedia, cooperation with film and IT industries

For his latest work, Artists, Friends, Racists, he used HYPERVSN 3D: holographic displays on which a series of images (a mix of animation and photography) were played.

Cartoons were created under his direction in one of the Hollywood studios, and displays resembling small fans are successfully used for projection of advertisements in South Korea and other Asian countries.

Kara Walker, a bright representative of contemporary art, is considered one of the most challenging, provocative, and productive American female artists of her generation. She uses modern technology to create her work.

She creates models of large-scale sculptures on 3D printers before moving on to create the final version of her works, which can be made from various materials – from sugar, cork, wood, metal to recycled materials.

Museums in the US and Europe are supported by benefactors and trustees.

The patronage of museums is considered a prestigious business, which gives exclusive access to collections (you can enjoy your favorite exhibits all alone); close communication with curators and artists; invitations to private parties and charity evenings.

In addition, for their generosity, patrons can receive membership in the board of directors. The trustees are also provided with special tax benefits, which is a very pleasant financial bonus to such a noble mission as the development of the country’s cultural fund.

Support from the philanthropist is carried out both in the form of direct financial influences on the purchase of certain works for a collection or for the implementation of special projects and exhibitions and through the donation of works of art from their collections or purchased at the request of the museum.

Quite often, these things are done incognito, but the trustees always get the opportunity to present themselves publicly – from mention in the annual report to the honorary title of the museum ambassador.

Despite the fact that such a system of support from philanthropists is vital for the development of contemporary art, it also has its weaknesses. First of all, this is the presence of prerequisites for the museum’s dependence on the sponsor.

And while most directors are committed to maintaining independence and keeping art out of the way of sponsors, they have to be virtuoso masters to maintain a balance of interests.

But, if the institution of sponsorship begins to come into direct conflict with the values ​​of the museum team, the latter breaks off relations with the trustee.

Not so long ago, a scandal with the Whitney Museum of American Art broke out. The public and the creative professions opposed Warren Kenders’ participation on the board of directors of the institution and, therefore, against his financial support.

The scandal coincided with the Biennale, which is the most important and prestigious exhibition for young representatives of contemporary art in the United States.

As a result, 8 of the participating artists asked the museum management to remove their work from the exhibition in support of public protests against Warren Kenders and his involvement in the life of the cultural institution. More than 200 people participated in one such protest.

But private nonprofit initiatives should not be underestimated: sometimes the work they do is as important as a well-funded museum.

A striking example of a successful “private” initiative is the collection of Don and Mera Rubell. Rubel acquired the first work in his collection in 1964.

At first, the young family was very limited in funds, so Don and Mera agreed that their budget for art would be $ 25 per month. Initially, Rubells were interested in young art (they simply could not afford anything else).

Over time, the Rubell collection expanded, and young artists of the 60s and 70s (Basquiat, Sherman, Haring, and others), who formed the core of their collection, became recognized authors.

The Rubells are now one of the most influential families of contemporary art collectors in the United States. Works from the Rubell collection often include the world’s best museums in their projects.

The Rubell collection offers the viewer a comprehensive look at contemporary art. In addition to the already classical works by Murakami, Cattelan, Kruger, Lucas, Kusama, and other sensational authors, at the Rubells you can see, for example, the works of 29-year-old artist Chabalala Self.

Since 2011 Rubel has been practicing individual residencies for young artists. Later, the works created during the residence are presented as a small solo project.

At one time, Sterling Ruby became the first resident, an author whose works have since been added to the collections of the Tate and MoMA galleries.