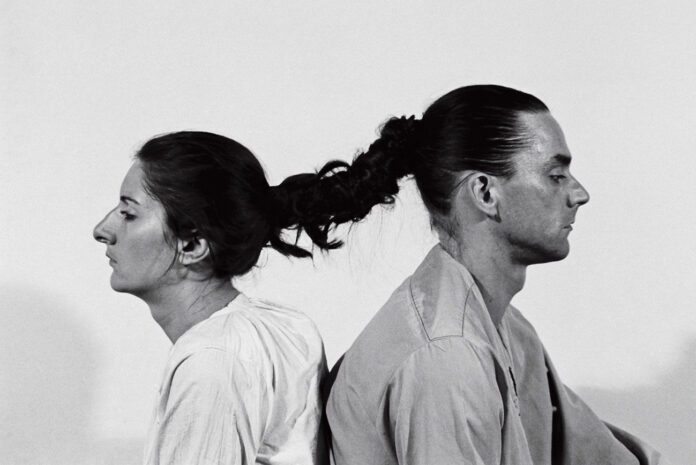 It is often said that the greatest artists also have the greatest love affairs. In order to be so in touch with your creativity, you need to be deeply in touch with your emotions, passions, and desires. And art history is saturated with great love stories of artists who inspired each other, formed intensive partnerships not only in love but also in their couples art, and who shook each other and the world around them. Below are some of the most fascinating and inspiring (former) pairs in art.

Marina Abramović and Ulay met in Amsterdam in 1976. Their meeting immediately sparked an intense and long-lasting connection between the two, both as lovers and as artistic partners. They worked and created intensively together until 1988, when they broke their artistic and romantic partnership at the end of a performance in which they started at opposite ends of the Chinese Wall and met in the middle. In 2010, after more than 20 years of not speaking to each other, Ulay surprised Abramović in an emotional reunion during her performance “The Artist is Present” at the MoMA in New York City. “The Artist is Present” was a solo-version of a shared couples art piece they had done together for many years. Abramović would sit for hours on end, looking visitors sitting opposite her in the eye without pause. When Ulay sat down opposite her, she started crying. Though Ulay later sued Abramović for having breached a contract regarding their couples art work, they have made up and are close friends once again.

Frida Kahlo and Diego Rivera first met when Kahlo approached Rivera as an art student, seeking advice on her career. Though he was already married, the two fell in love and got married in 1929. Their relationship was tumultuous, filled with infidelities, heated arguments, and impossible tempers. They divorced in 1939, but remarried a year later. Theirs was a typical case of “I can’t live with you, but I can’t live without you.” The two inspired each others’ art tremendously, and often show up in each other’s paintings as well. A particularly telling painting regarding how important they were in each other’s creative processes is Kahlo’s painting “Diego on my mind” (Self-portrait as Tehuana), in which Rivera is depicted as Kahlo’s third eye, the very epicenter of her creativity.

Pablo Picasso famously courted artist Francoise Gilot by bringing her a bowl of cherries while she was dining in a Paris restaurant. He was 40 years her senior, and was having dinner with his lover and muse of choice at the time, Dora Maar. Picasso and Gilot went on to have a ten-year relationship and two children. As Gilot wrote in her memoir Life with Picasso: “A relationship with Picasso was a catastrophe I didn’t want to avoid.” In 1953, after he became more and more controlling and impossible to live with, she left him and took the children with her. After the publication of her memoir in 1964, Picasso was so enraged that anyone who wanted to enter his studio had to denounce the memoir. But in between all the drama, their life together was filled with mutual inspiration. She was one of his greatest muses, and her own artistic work (Gilot was an extremely talented artist in her own right) also flourished as she spent time among Picasso and his friends, such as Matisse, Gilot’s greatest hero.

Lee Krasner and Jackson Pollock got married in 1945. Krasner had already established herself as a prominent abstract expressionist in the ‘30s. She was very involved with the New York avant-garde art scene, and was the one to introduce Pollock to Clement Greenberg, the art critic who would go on to call Pollock the greatest painter the US had produced. Krasner and Pollock were among the first post-World War II artists to settle in the countryside in East Hampton, in a sense setting in motion the art colony there. Pollock was already struggling with alcoholism at that time, and Krasner thought it would do him good to get him away from the city. In an interview with the New York Times, Krasner said of their artistic influence on each other: “Look, we shared the bedroom, but not the studio, and we maintained a strict by-invitation-only discipline about going into each other’s studios.” Any impact they had on each other’s art was, in her opinion, unconscious. According to art historian Barbara Rose, they absolutely influenced each other considerably. She has stated that Pollock helped Krasner be free and spontaneous in her painting, whereas Krasner helped him be organised and refined.

Max Ernst and Dorothea Tanning met when he came to visit her studio in New York City to see one of her paintings. Over a game of chess, the two fell in love. This was the beginning of a partnership that lasted until Ernst’s death in 1976. In 1956, the couple chose to relocate to France, where they lived and worked between Paris and the countryside. Ernst was one of the pioneers of the Dada and Surrealist movements, and Tanning, who started out as a Surrealist artist, was to move more and more to abstraction in the ‘50s. Tanning, though the less famous of the pair, was a multitalented artist. She also designed for George Balanchine’s ballets and was a writer and a poet.

Elaine and Willem de Kooning were Abstract Expressionist artists who met in New York in 1938. Willem de Kooning was a Dutch artist who had arrived in New York in 1926 as a stowaway on a ship. They were introduced by a friend, and it was love at first sight. She was outgoing, free spirited, talented, a femme fatale. He was introverted and gloomy, obsessed with his work. Willem gave Elaine strict, traditional drawing lessons which she has said provided her with the skills that built her confidence as a portrait painter. Elaine, convinced that Willem was a genius, soon began to promote his career – even if it meant having affairs with prominent art critics such as Harold Rosenberg. In 1957, the artists separated after too much drinking and too many affairs. In 1976, they got back together and Elaine took it upon herself to manage Willem’s studio and help him quit drinking (she was sober already). Though Willem de Kooning was the more famous one of the pair, Elaine had an equally impressive career that is finally getting the attention it deserves, after years in the shadow of Willem de Kooning. Strikingly, Elaine was commissioned to do a portrait of President John F. Kennedy in 1962, because she represented the new frontier of painting, Abstract Expressionism, and because she was quick.

Sophie Taeuber-Arp and her husband Hans Arp were both founders of the Dada movement. They met in Zurich in 1915, and though they shared the same basic values and attitudes regarding art, they had very different approaches to their creative work. The Arps were each other’s most important collaborators. Sophie, for example, influenced Hans to start working with unconventional materials and techniques. They would make couples art together with “duo-collages”, attempting to eliminate the trace of the artist’s hands by avoiding the use of scissors. Sophie also took part in Dada performances as a dancer and choreographer, and designed puppets, costumes, and sets for performances. The couple eventually moved to Paris, but had to leave when the Nazi’s invaded France, and returned to Switzerland. Sophie Taeuber-Arp tragically died in 1943 of accidental carbon monoxide poisoning, leaving Hans Arp behind.

Jasper Johns and Robert Rauschenberg fell in love in the ‘50s, and starting collaborating together on couples art. Their work pushed away from Abstract Expressionism, and paved the way for something completely new: Pop Art. Johns and Rauschenberg were iconoclasts of their time, depicting banal, everyday objects and turning symbols into abstractions. By the beginning of the ‘60s, their relationship was falling apart and they went through a bitter break-up. They did not speak for years after, but in their 6 years together, they brought out the best in each other as artists and created some of their best and most influential work.

Gilbert Prousch (left) and George Passmore (right) met in 1967 in London while studying sculpture at Saint Martin’s School of Art, and instantly fell in love. They have been living and working on couples art together ever since, an eccentric pair who are not afraid to be brutally honest about their thoughts on everything. Politics, race, nationalism – their art is brutal, in your face, and unapologetic. Their motto is: “We say what we want”. They are confrontational, provocative, and ask questions. They are angry at artists who do not. Their shocking, tragic-comic art works mirror the disturbing truths of our time back at people.

A list of celebrity couples in art would not be complete without Robert Mapplethorpe and Patti Smith. They are an art-world legend, representing that wild and expansive New York City of the ‘60s and ‘70s, where artists scraped together pennies in the Chelsea Hotel. Robert Mapplethorpe, the revolutionary photographer, and Patti Smith, the rock star, the poet, the artist. Mapplethorpe and Smith were lovers, best friends, and collaborators. Most of all, they took care of each other throughout many years of struggling to eat, finding a place to sleep, surviving as artists. According to Smith, who published a memoir about her relationship with Mapplethorpe a few years ago, they gave each other what the other did not have. She gave Mapplethorpe a practical support system and unconditional belief, while he gave her full belief in herself as an artist. Smith left the city for Detroit in 1979, where she married MC5 guitarist Fred “Sonic” Smith. Mapplethorpe died in 1989 form complications due to AIDS. On his deathbed, he made Smith promise she would write a book about their lives together. This led to Patti Smith’s incredible memoir “Just Kids”.