Home News A New Law in New York Is Going to Change the Way... 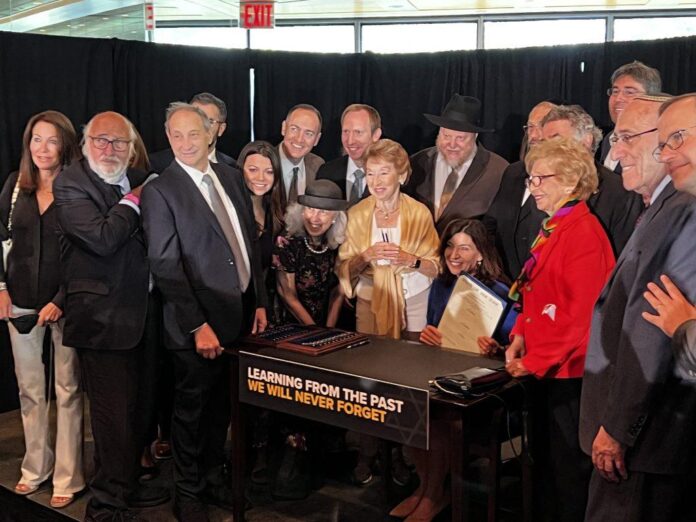 Thanks to a new bill, museums in New York will now be required to disclose if artworks on display ever passed through Nazi hands.

Pieces proven to have “changed hands due to theft, seizure, confiscation, forced sale, or other involuntary means” during the Nazi era must now be accompanied by special placards acknowledging that information, the law states.

“During the Holocaust, some 600,000 paintings were stolen from Jewish people not only for their value, but to wipe our culture and identity off the face of the Earth,” State Senator Anna M. Kaplan, who introduced the bill, said in a statement.

“Today, artwork previously stolen by the Nazis can be found hanging in museums around New York with no recognition of the dark paths they traveled there. With the history of the Holocaust being so important to pass on to the next generation, it’s vital that we be transparent and ensure that anyone viewing artwork stolen by the Nazis understand where it came from and its role in history.”

NEW: The Holocaust Education Bill has been signed into law by @GovKathyHochul!

With antisemitism on the rise, and Holocaust misinformation exploding around the world, it’s never been more important that we learn the lessons of the Holocaust.

A memo accompanying Kaplan’s bill suggests that “many museums now display this stolen art with no recognition of their provenance” and points out that New York law already requires such objects to be reported to the Art Loss Register.

Notably, the new law does not apply to artworks stolen from other periods of time, such as the colonial era, as Gothamist points out.

We will never forget the horrors of the Holocaust and the memories of six million Jews who perished at the hands of the Nazi regime.

Today I was joined by survivors and legislators to sign new laws to strengthen Holocaust education in our schools and cultural institutions. pic.twitter.com/lwwCRb2zhy

The bill, S117A, was signed into law by New York Governor Kathy Hochul in a ceremony at the Museum of Jewish Heritage on Wednesday, August 10. It was inked among a suite of mandates meant to increase awareness about the Holocaust and its legacy.

Other newly adopted laws include S121B, which is meant to ensure that students in the state learn about the Holocaust, and S8318, which requires the New York State Department of Financial Services to maintain a list of institutions that waive wire transfer or processing fees associated with Holocaust reparations payments.

“As New Yorkers, we are united in our solemn commitment to Holocaust survivors: We will never forget,” Hochul said. “These are individuals who have endured unspeakable tragedy but nonetheless have persevered to build lives of meaning and purpose right here in New York.”