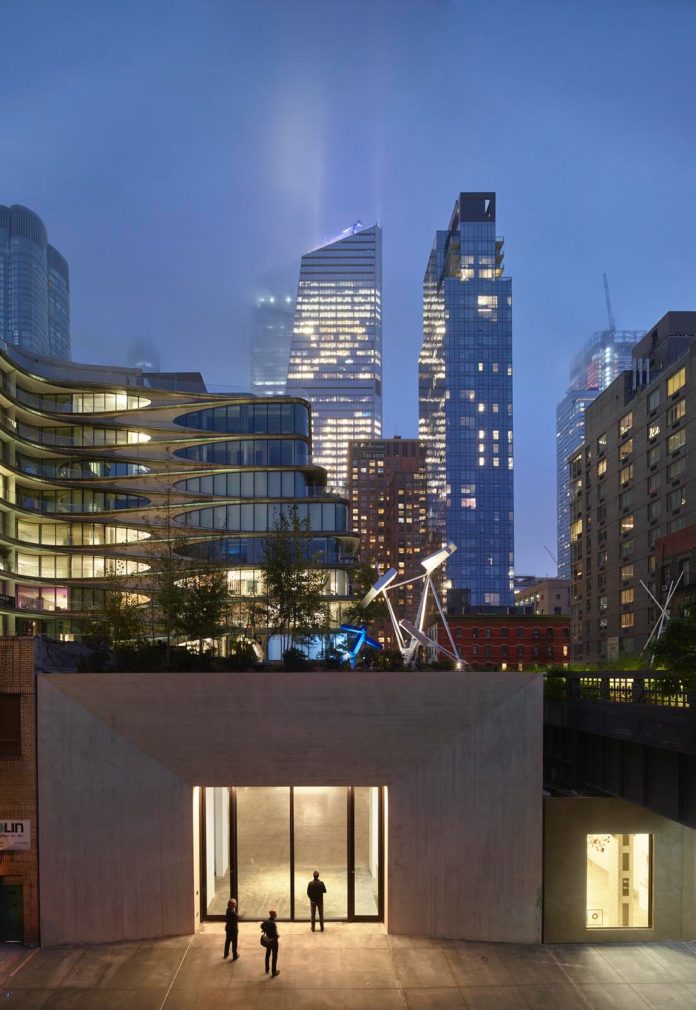 Kasmin Gallery in New York now features American sculptor George Ricky, who passed away in 2002 at the age of 95.

Ricky is best known for his monumental abstract sculptures – “useless machines” as he called them – whose movements were determined by changes in air currents.

In the fall of 2021, the Kasmin Gallery NYC will present two simultaneous exhibitions of the artist’s work, starting with the installation of nine large-scale sculptures along Park Avenue as part of a public art program organized by the Park Avenue Foundation’s Sculpture Committee in collaboration with New York Parks. There will also be three works presented from the High Line of Manhattan. 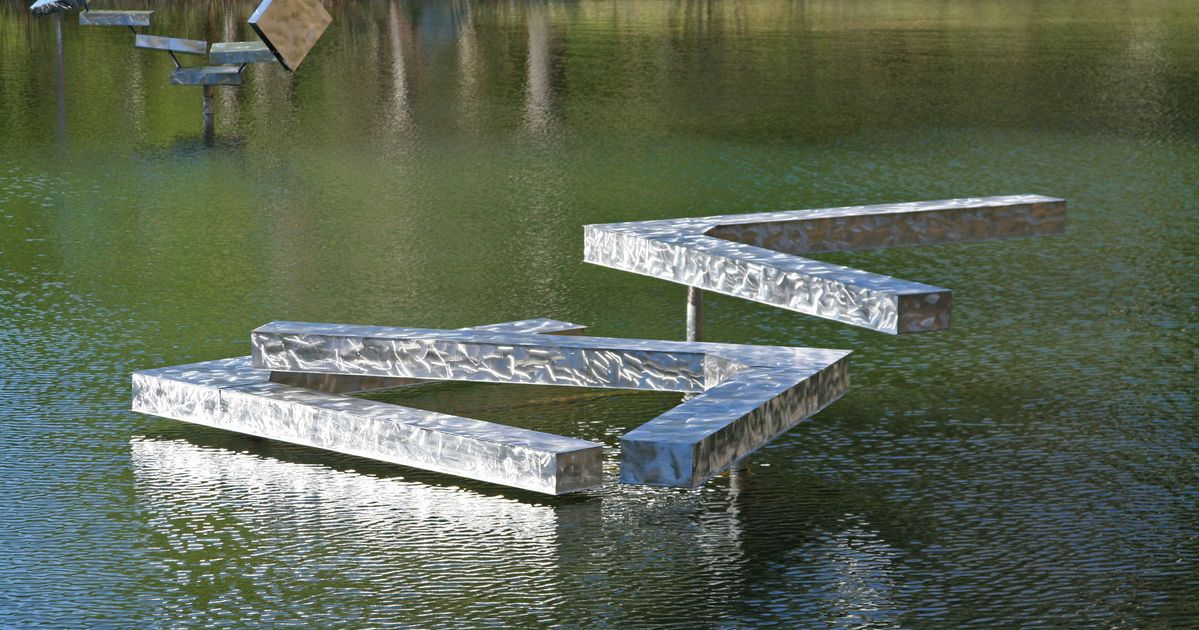 Eric Gleason, senior director of Kasmin, stated that George Ricky was a unique person in the history of sculpture in the 20th century, and his many innovations in kinetics had helped to create and define the genre.

George Rickey and his “useless machines” 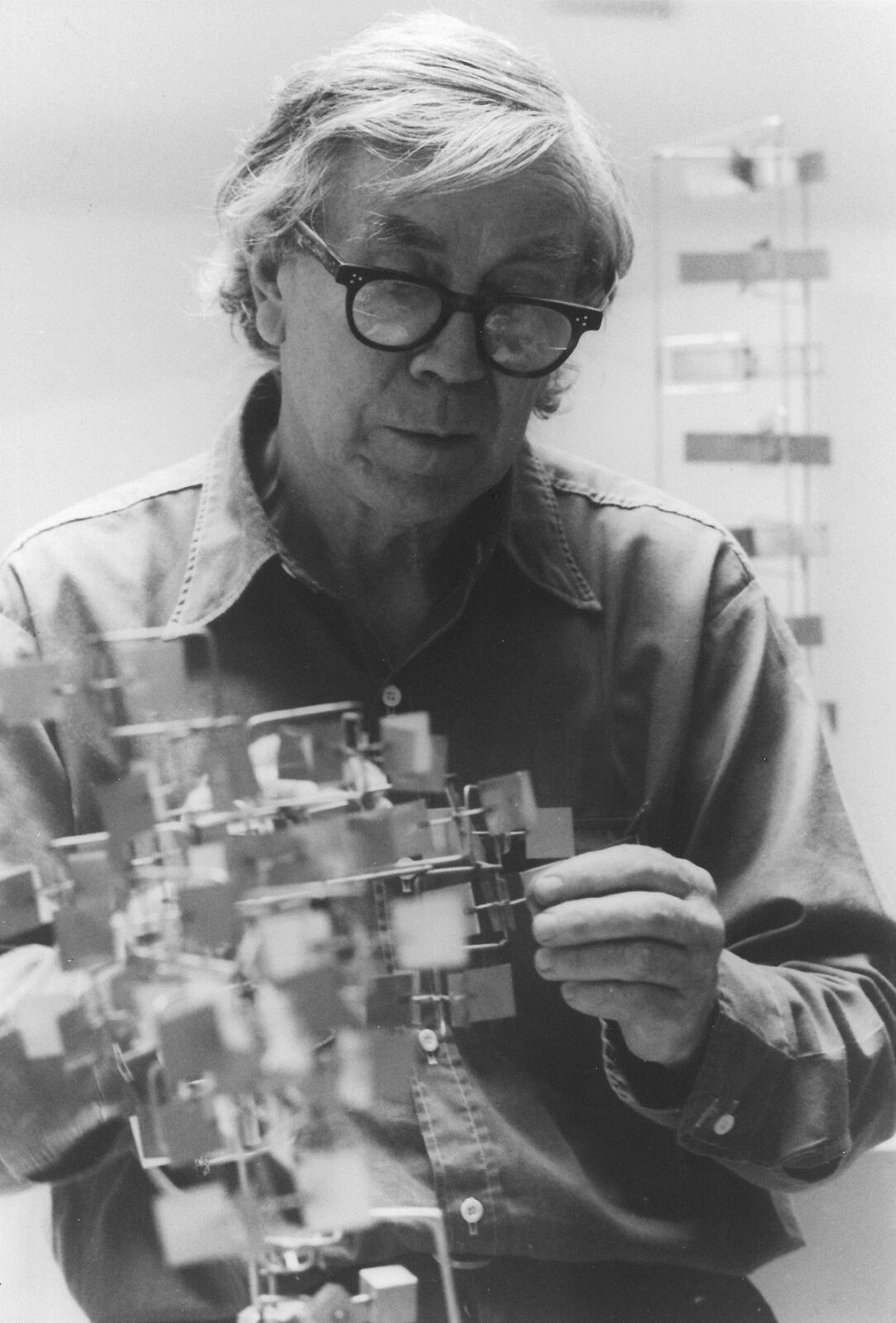 George Rickey is well known for his “useless machines.” Meticulously crafted kinetic sculptures in reflective stainless steel, these graceful, precisely calibrated sculptures move with the wind at unpredictable intervals, drawing attention to the effects of wind, light, and changing environments.

Over the past twenty years, George Rickey’s estate has brought Rickey’s art to a new audience, delighting her with its timeless yet playful kinetic sculptures that respond to wind, light, and the forces of nature around them. Of all natural forces, it was the movement of the wind that most captured Rika’s imagination.

Once he wrote that the artist expected that it was not trees, not flowers, not a landscape that awaited him as a subject, but swaying branches and trembling stems, thickening or carrying clouds, sunrise, and sunset, and the rise and fall of the heavenly bodies.

George Rickey returned to the United States of America in 1930. Before that, he had studied painting in Paris. His career as an artist developed in the 30s and early 40s. While serving in the Army Air Corps, he rediscovered his long-dormant natural mechanical ability. In the mid-30s, he saw the Calder exhibition of mobiles in New York. During the war, his ideas about a new form of art, different from art, began to change. 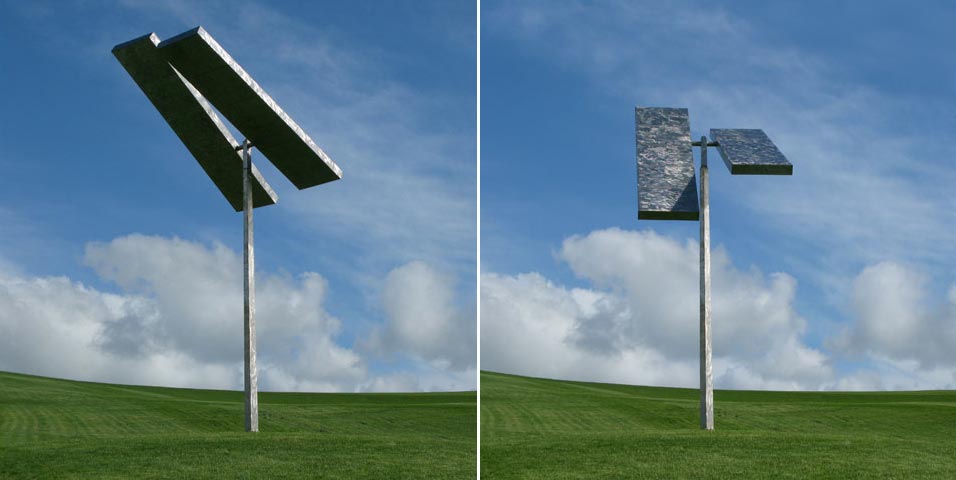 While familiarizing himself with the gyroscopes on the B-29 scopes from his youth, other important memories were connected that may have influenced his creative life as a kinetic sculptor – for example, a knife-edge pendant that held the compass and slab at the level of his family. a yacht raised in Scotland, and the simple pendulum mechanics he saw in his grandfather’s clock making workshop as a child.

During the war years, in his spare time from the workshop, he began experimenting with mobile devices in the Caldera style, and then with small “machines”; later other sculptures will be inspired by the movement of flowers, sedges, clouds, and stars in the wind.

In late 1965, Ricky expanded his vocabulary from lines to planes to create captivating and evocative drawings in space that further focused on the movement of the work. Two Planes Vertical-Horizontal II is a visually simple and fun work in which a moving square is used as an object.

The planes are compound pendulums – objects with weights above and below the pivot point – that move along parallel paths. A small hatch provides access to the internal ball bearings and supporting structure, counterweights for the split swingarm system. Styrofoam filling ensures silent movement of the boxes.

Two shallow boxes with internal weight, made of polished stainless steel, rotate on either side of the polished circular support to which they are attached.

In the early 1970s, other forms of movement emerged, including circular movement or full rotation around the central leg of the piece, along with an elongated open rectangle in the shape of a frame. The open square elements in the cycle of Five Open Squares are carefully calibrated so that they move in the slightest wind, continuously changing the shape of the figure. Although the squares rotate independently, they remain connected, creating a constant dialogue between unpredictable movement and prescribed order. Looking through the open spaces, viewers will feel that the landscape itself is constantly changing.

Shortly thereafter, Ricky began to devote himself to the study of movement in sculpture, creating dynamic works using simple geometric shapes such as lines, squares, rectangles, circles, etc., which demonstrate his amazing understanding of technique and mechanics.

Although the works enthusiastically interact with the impact of wind currents in their environment, the speed of their random movements is constrained by simple placement and fixed arrangement of elements. The proportions remain the same, but the dance is always changing.

It is this tension that defines Rickey’s sculptures. The artist once said that it is important to create art that has to be expected. Thus, works can gracefully oscillate through an infinite number of compositional iterations, affecting all aspects of the natural world around them. 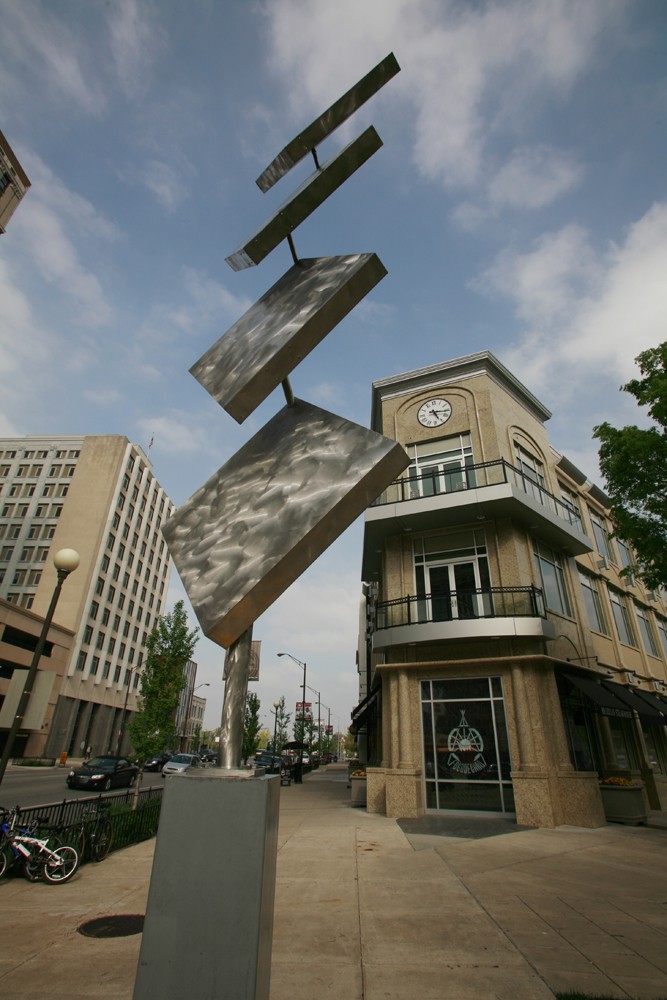 Most of Rickey’s work was created at his studio in East Chatham, New York, where he settled in 1960. Before that, the artist lived and taught in Bloomington, Indiana; New Orleans, Louisiana; New York, New York, and the entire Midwest.

His childhood, youth, and student years were spent in Scotland and Great Britain. Besides East Chatham, he had studios in Berlin, Germany, and Santa Barbara, California.

His works of art can be found in the permanent collections of more than 150 museums around the world. For example, the Hirshhorn Museum and Smithsonian Sculpture Garden, Washington, DC; Los Angeles County Museum of Art, California; Museum of Modern Art, New York; Metropolitan Museum of Art, New York; National Gallery of Art, Washington, DC; Walker Center for the Arts, Minneapolis; National Gallery of Scotland, Edinburgh; Boijmann van Beuningen Museum, Rotterdam and Bern Art Museum, Switzerland, among many others.

Kasmin’s longstanding commitment to the exhibition of monumental sculpture has led to the promotion of community art projects in New York and abroad. The Kasmina Sculpture Garden, opened in 2018, is a first-of-its-kind model of public sculpture.

Rejecting the dichotomy that pits bricks and mortar against new programming techniques, the platform puts Kasmin’s list of artists and exhibitions in dialogue with one of the most innovative art spaces developed in recent years, rethinking how a commercial gallery can interact with art and the public.

The George Rickey Foundation has a respected partner at Kasmin Gallery NYC who fulfills the global mission to promote appreciation and understanding of George Ricky’s life and work.

With his wide range and dedication to living artists, no one knew what to expect when walking into one of his galleries.

Paul Kasmin is a British-born art dealer who founded a small gallery-empire in New York that was loyal to an eclectic cohort of living artists and dedicated to presenting unique historical material. Mr. Kasmin was known for his independent outlook, ingenious optimism, and penchant for stingy, subtly British precision.

For over 30 years, Mr. Kasmin has built his own version of the mega-gallery, consisting of a group of Manhattan exhibition spaces around the intersection of 10th Avenue and West 27th Street. But it was relatively unassuming, lacking the usual blue-chip artists, high-profile auction deals, global reach, bookstores, and more than other metropolitan areas might have to offer.

Paul Kasmin has opened his fourth gallery in Chelsea, a new flagship space located along the High Line that is the heart of New York’s gallery district. Studio MDA has a long history of collaborating with Kasmin, designing his other two gallery spaces, numerous exhibitions, and his art fair stands. In designing this new space, studio MDA has created a purpose-built gallery that acts as the Kunsthalle to display and view art with maximum spatial flexibility and daylight inside. 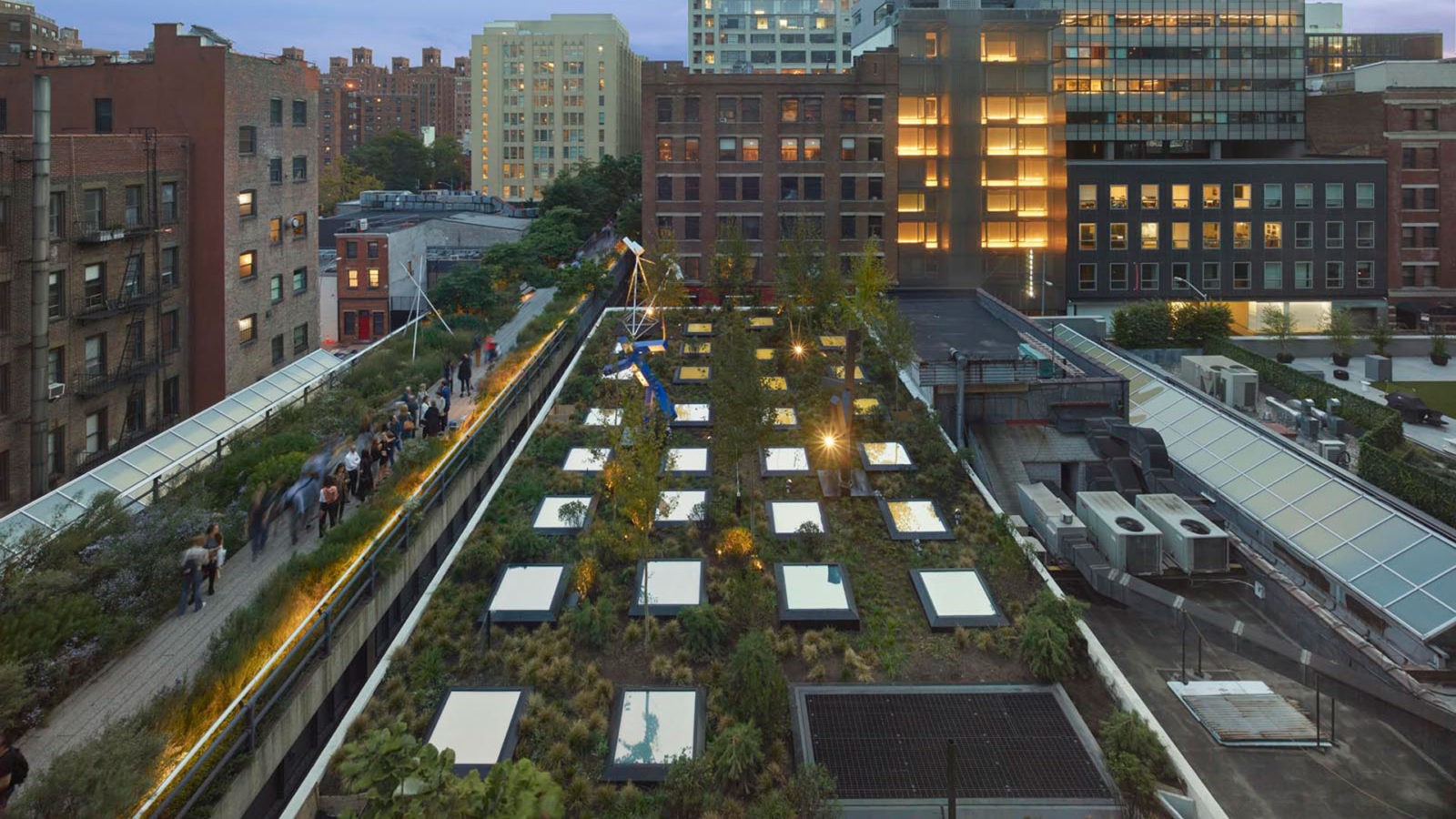 A new green landscape has appeared on the roof of the one-story building, which serves as a sculpture garden that the residents of the city enjoy.

The main exhibition space, dedicated to displaying large-scale artwork, is a 3,000 square foot space without pillars, with 22-foot-high walls and polished concrete floors. The ceiling in the Kasmin gallery New York is a pattern of 28 trapezoid-shaped concrete boxes. Each of them has a large skylight. It provides diffused natural daylight in the art space. 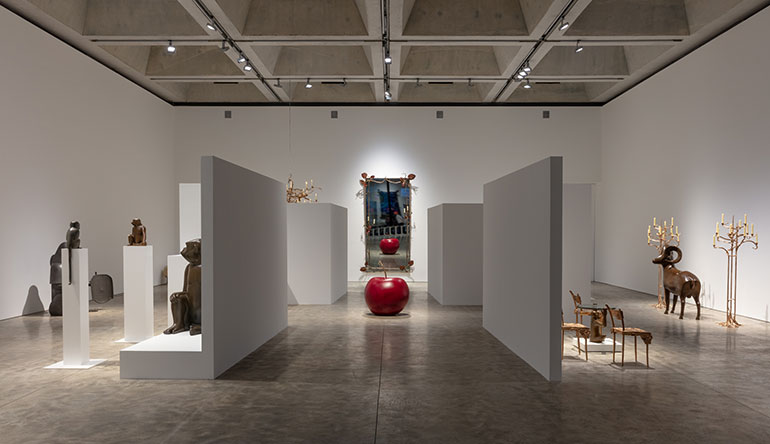