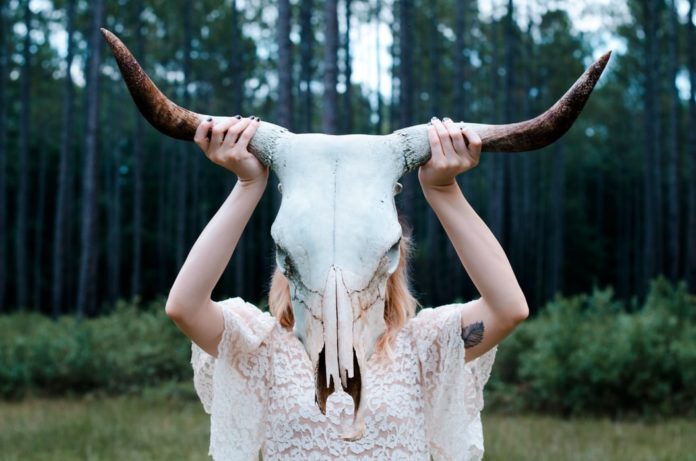 When someone mentions skulls and décor in the same sentence, our mind immediately pictures a deer skull hanging above a fireplace in a cozy hut somewhere in the woods. However, contrary to popular belief, skulls are not just trophies hunters collect and display in their man caves. In fact, Balinese skulls are beautiful and make a great focal point of any room. Apart from being gorgeous, they are also sacred, at least to the Balinese people. They live on the island of Bali, which is located in Indonesia. Their cultural traditions have been affected by several religions, and have developed under Hindu Shaivism with Buddhist influences. These people believe that by cremating someone we liberate their soul and let it move on. If you have ever seen a carved Balinese skull, you surely have noticed how complex those carvings are and thought how difficult it must be to create such a thing. If you are interested in this artwork and you wish to know more about these sacred animal skulls, continue reading.

Bali skulls have a strong connection to animism.

The Balinese people practice animism, which means they believe that all things in this world, from humans and animals to objects and places, possess a spiritual essence. In other words, they believe that all things have a soul. According to them, there is no difference between the spiritual and the physical world. They carve the skulls as a sign of respect because for them using every part of the animal equals respecting its existence.

Each skull has its purpose

There are so many things Balinese skulls are used for. There are those that are carved to be used in a ceremony, and should never be used in some other place. On the other hand, there are skulls that have been carved to be used as décor. On the Skull Bliss website you can find incredible carved skulls, from cow and buffalo skulls to longhorn ones. Some of them are designed as wall decorations, and others have been turned into unique and gorgeous lamps. In Balinese culture carved skulls are not just art pieces, but also an expression of the significance of all life and the spirits that live within.

As mentioned, Balinese people practice animism, and therefore each of the skulls is carved to provide the deceased creature with dignity and respect. Just the process of cleaning the bones lasts more than a week, and after it is complete the artist will need three days to shape the skull. Afterward, some choose to add paints or stones to further embellish the skull. A lot of these skulls are carved to reflect religious figures and artifacts. While some artists follow the old tradition and hunt each animal themselves, others follow cruelty-free standards and only use skulls of already dead animals. Either way, the craftsmen invest time and energy to make sure that the deceased animal is respected.

Interesting carvings often present religious images, such as the portrayal of Ganesha, the Hindu god of knowledge. Most carvings celebrate specific gods and some of these skulls serve spiritual purposes. When sculls are used for sacred ritualistic purposes, dancing, music, masks, and costumes are also involved.

Balinese people have a rich and interesting history that is embedded in their value of all things. Carved skulls are not an exception and tell a lot about their culture and way of seeing things. They are not just mere souvenirs and it is important that owners of these skulls appreciate the history and traditions that exist within them.