Home Art What Are Francisco Goya’s Best Works? Discussion of the main works of... 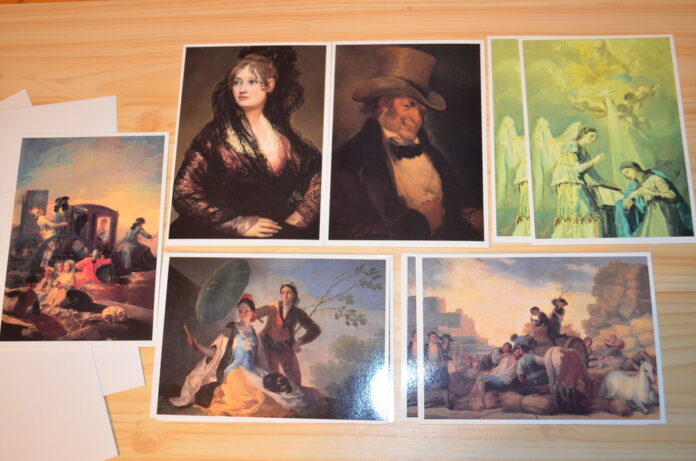 Francisco de Goya, a famous Spanish painter, and printmaker gained his initial fame as the creator of beautiful tapestries, but real fame came to him as a court painter of the Spanish crown. Goya’s paintings are unique thanks to their creativity and bold use of colors. His style has inspired many imitators and has had a major impact on the art world.

Milestones in the work of Francisco Goya

This is part of a series of 63 works that Francisco Goya created at the beginning of his career. It is believed that the work on this cycle helped the master to study the ways of human interaction, which later turned out to be important in the creation of later masterpieces. This Francisco Goya painting combines the motives of French and Spanish fashion. 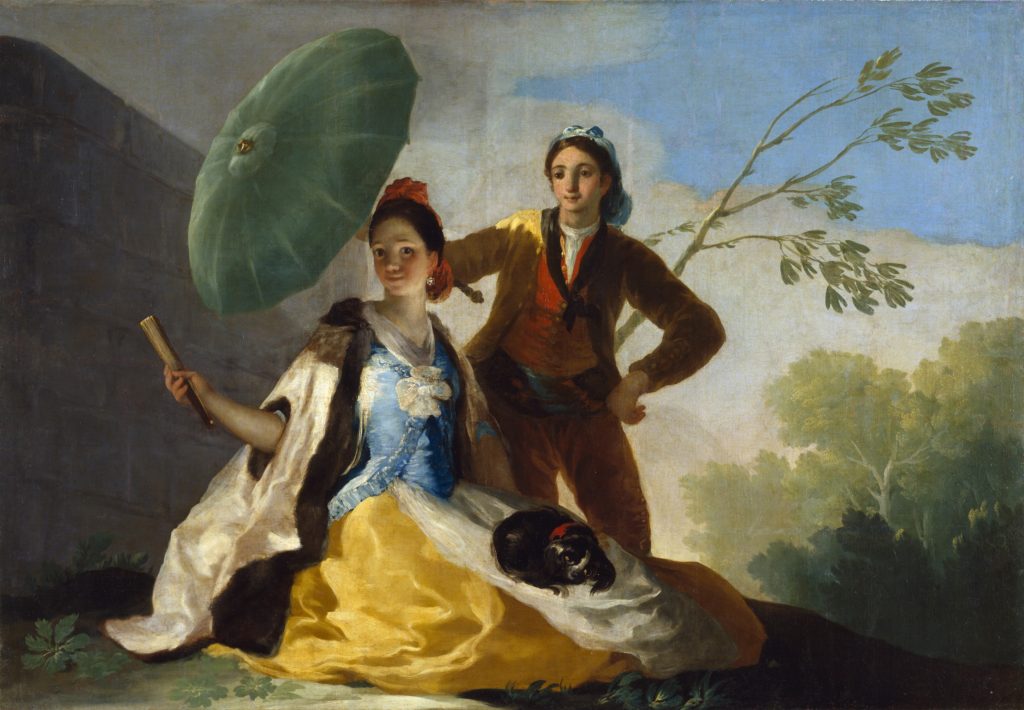 The group of famous “Black Paintings”, created by Francisco Goya in the later stages of his work, includes the image of a dog, which is easy to lose in the artistic space of the picture. Usually, the work is interpreted as a symbol of a person’s struggle with troubles and evil forces. 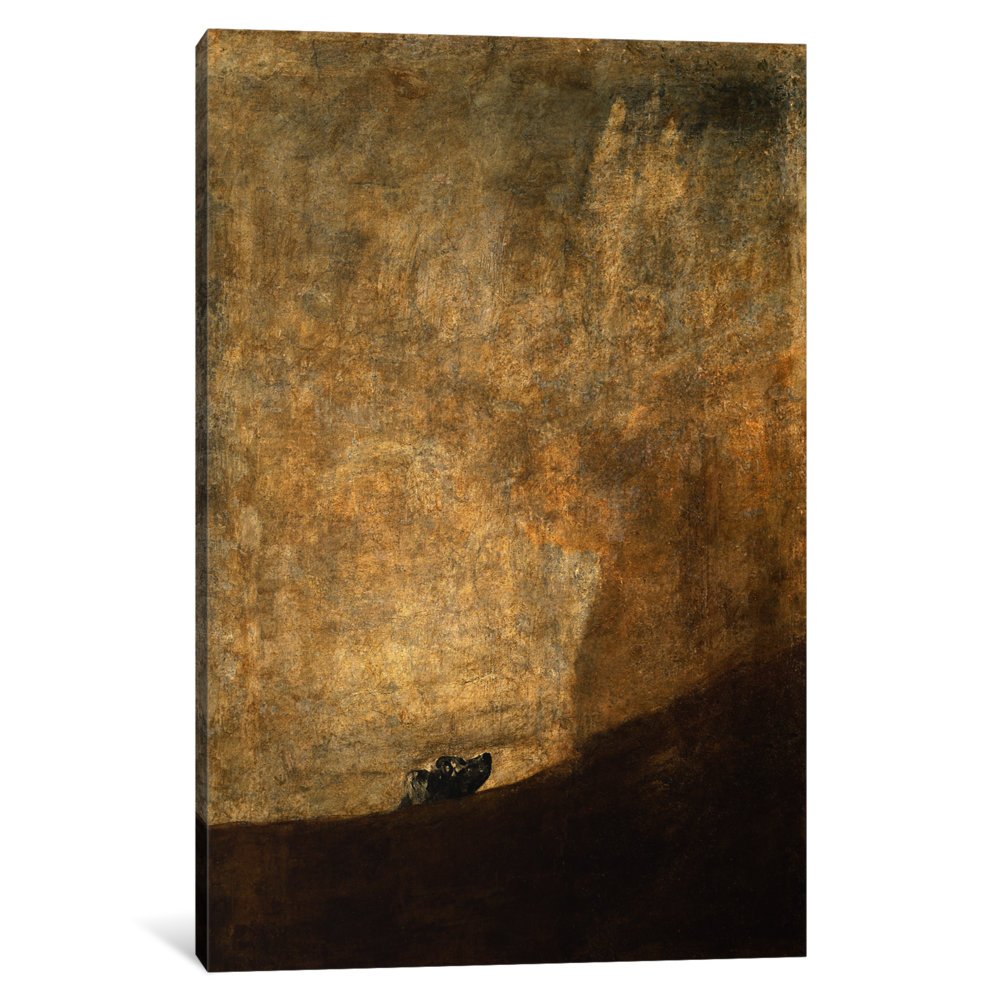 Both of these Francisco Goya’s best paintings (“Maja Nude” and “Maja Dressed”) are located side by side in the same hall of the Prado Museum (Madrid). Among the artists who created paintings inspired by these works by Goya, Ignacio Zuloaga, and Edouard Manet should be noted. To this day, it is not known who served as a model for the picture’s main character, but traditionally, the 13th Duchess of Alba is named as a source of inspiration for Goya. 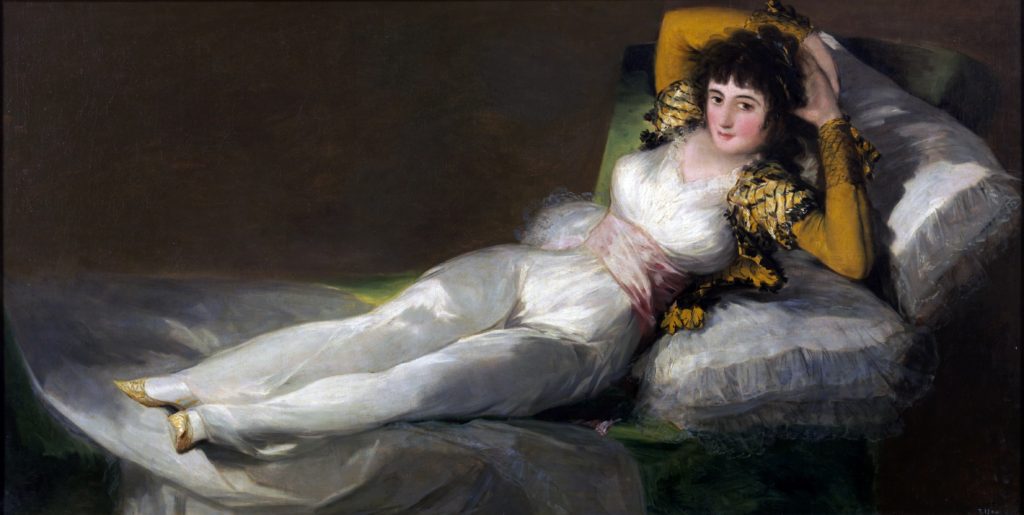 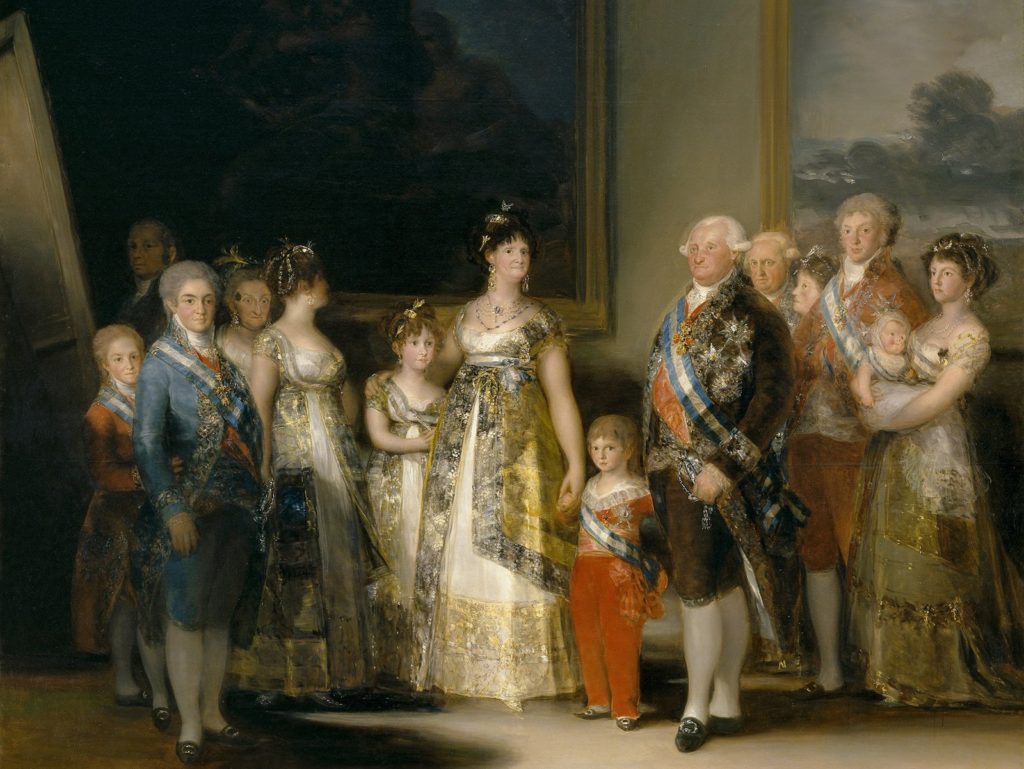 The portrait shows the deliberately luxuriously dressed king of Spain and his family. It should be noted that the artist’s unwillingness to flatter and lie led to the fact that Goya, according to modern researchers, showed in the portrait of the monarch and his family the corrupt nature of their power. Probably, the person barely visible to the left is the author of the work. 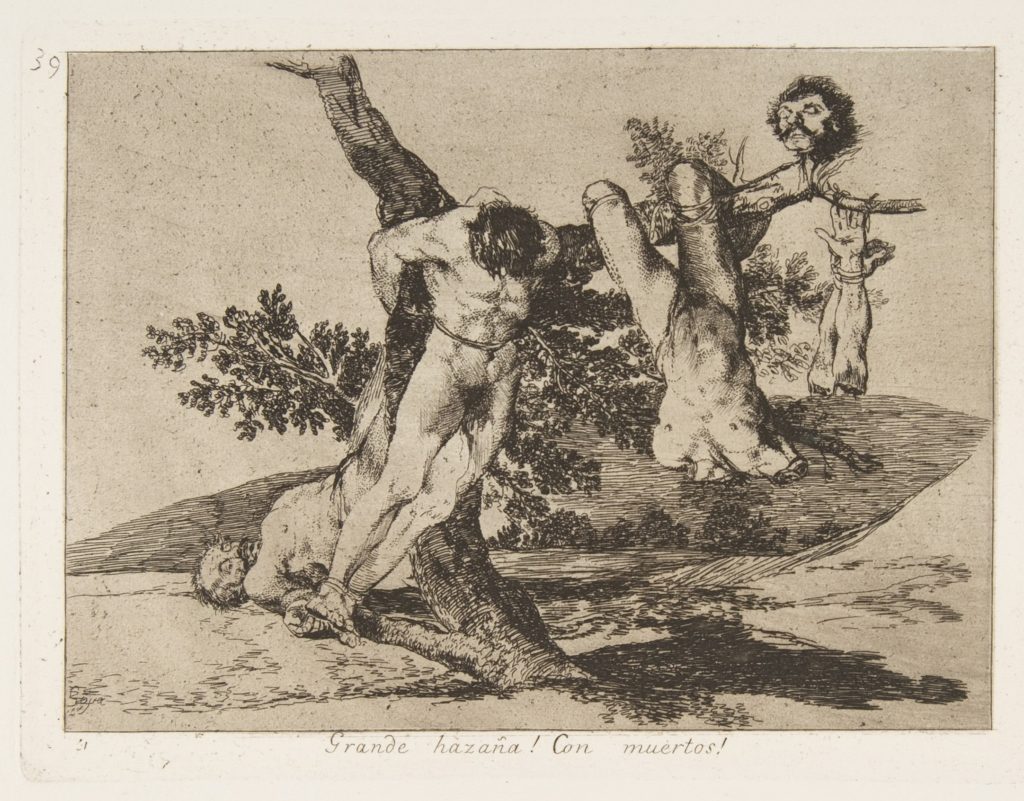 This series of 82 prints is one of Goya’s most significant works. Art critics divide the series into three parts:

This series is a phenomenal visualization of the author’s position, which contains outrage and bold political statements.

The Sleep of Reason Produces Monsters (1799) 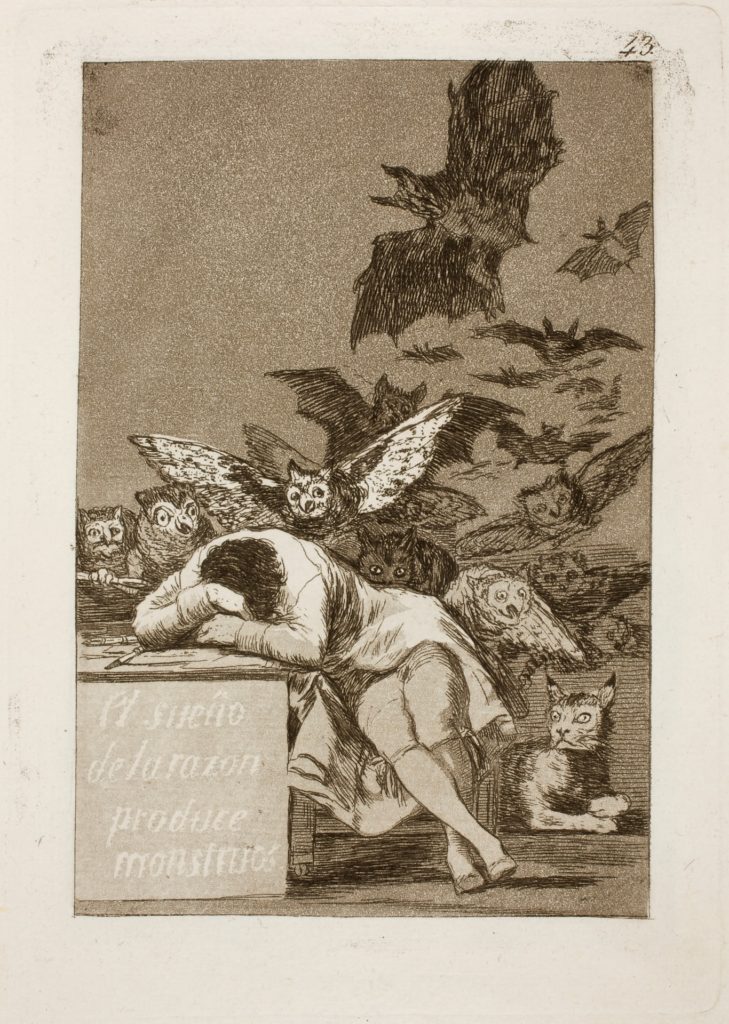 This composition is also a part of the series “Caprichos”, consisting of 80 works. The artist sleeping among the tools is surrounded by monsters that symbolize ignorance and other vices of society. 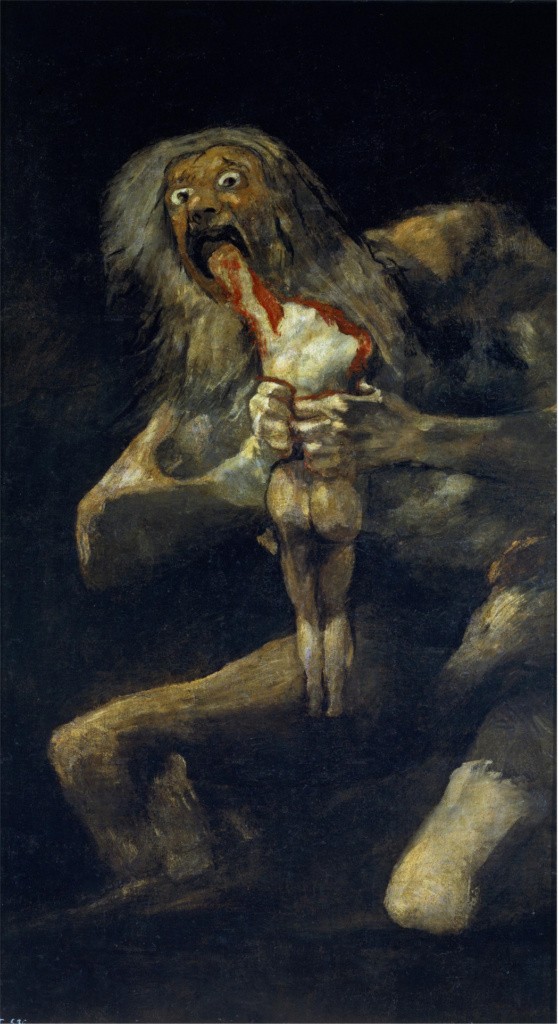 This Francisco Goya masterpiece is based on a Roman myth, according to which the titan Saturn ate his children, as he was predicted to die at the hands of one of his sons. However, the prophecy was destined to come true. “Saturn devouring one of his sons” is a disturbing portrait from a series of “black paintings”.

This one of Francisco Goya’s best paintings was created between 1819 and 1823. – on the wall of his house, which residents nicknamed the “Villa of the Deaf”, Goya created a series of terrible frescoes, which he did not name. Contemporaries recalled that the artist was at that time in a particularly gloomy mood associated with the failures of the Spanish Revolution, and decided to paint frescoes on top of the already created cheerful murals more in line with Goya’s mood. This is how this terrifying series arose.

The famous house has not survived and was destroyed at the beginning of the last century, however, fortunately, all the frescoes of the famous painter were transferred to the canvas by Salvador Cubes. Today “Saturn Devouring One of His Sons” is kept in the Prado Museum. 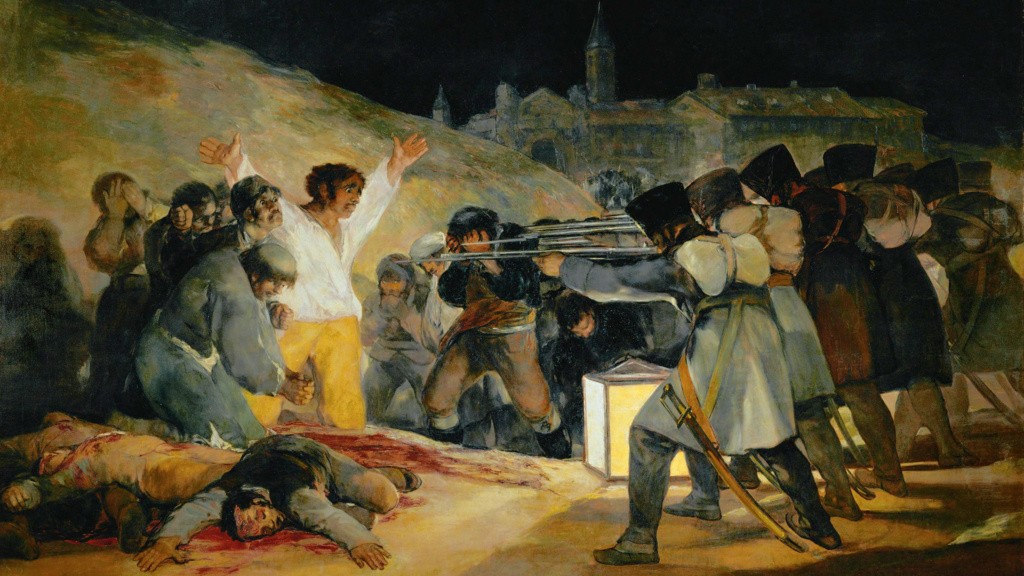 On the second of May in1808, the people of Madrid rebelled against the French occupation. Goya depicts this scene in the painting “May 3rd, 1808”.In the center of the canvas, there is the retaliatory blow of the French troops, as a result of which hundreds of Spaniards were shot.

Revolutionary in style and level of symbolism, the painting inspired Pablo Picasso to create the famous “Guernica”. 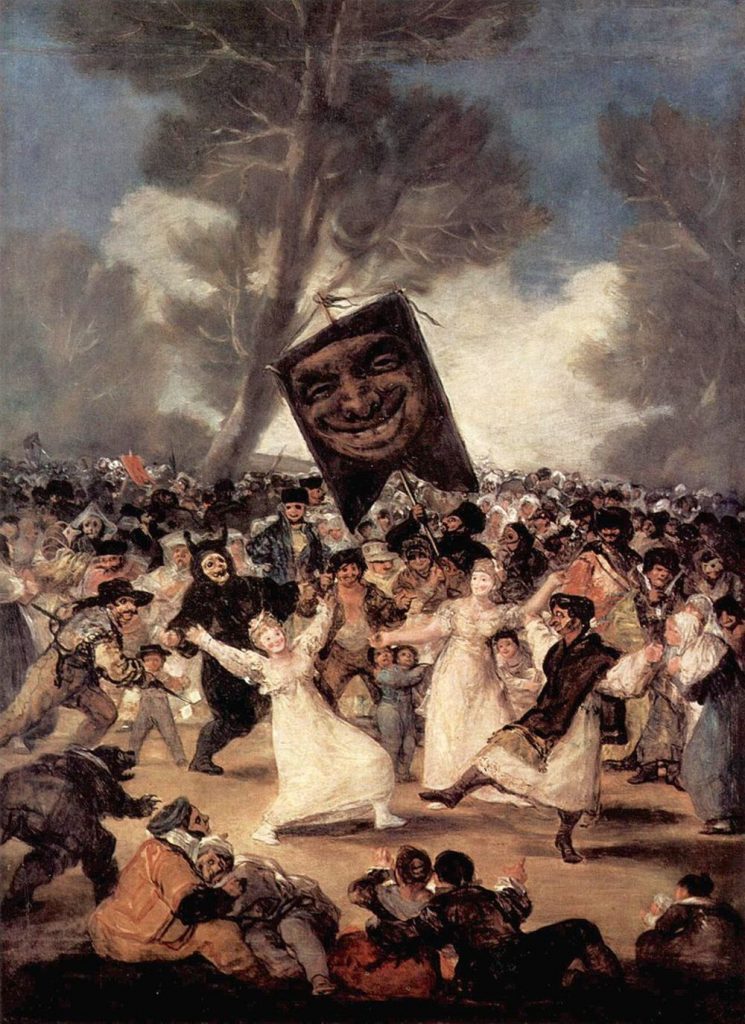 Accademia San Fernando, Madrid Goya presents a folk carnival with a demonic celebration. Under pressure from the Inquisition, the artist was forced to change the original version of the painting and replace the inscription on the banner mortus (died) with a grimace of a mask.

The bubbling gaiety and distorted joy of the unbridled crowd is a grotesque allegory for the existing social order. In his work, Goya revolts against the orders established by the Inquisition and demonstrates the powerlessness of his contemporaries in their face.

Portrait of the artist Francisco Bayeux(1795) 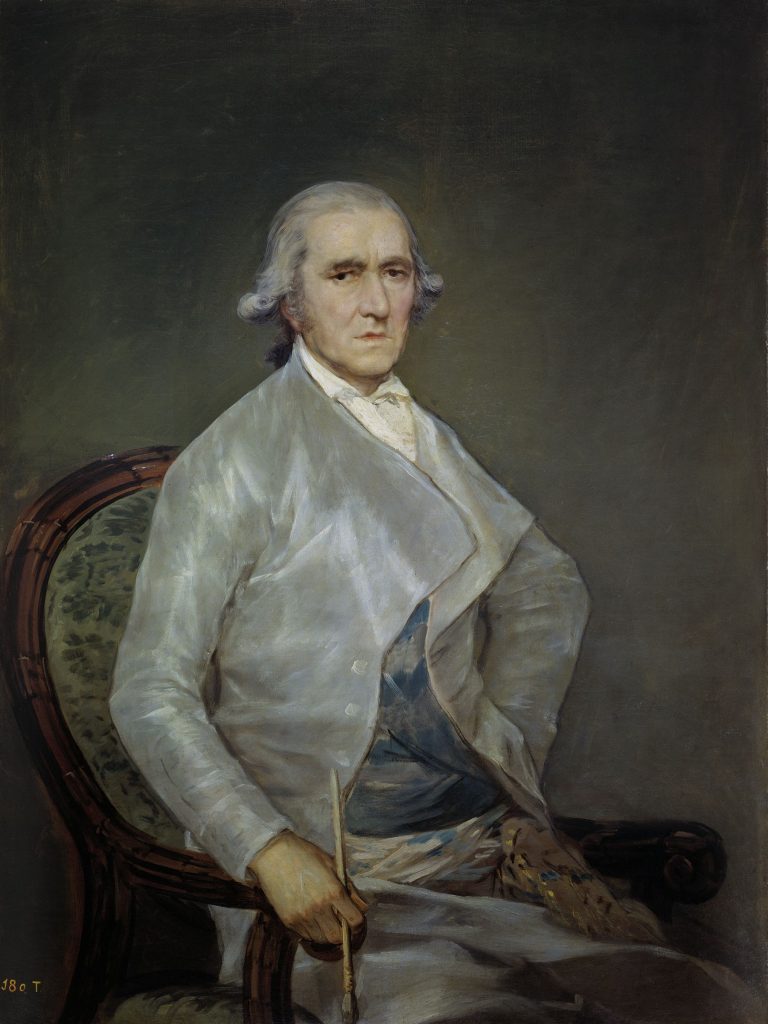 After 1794, Goya created a number of portraits from life. Thanks to the artist’s keen observation and precise technique, his works are distinguished by deep psychologism and penetration into the inner world of a person. A portrait of Francisco Bayeux (1734–1795), the court painter and brother-in-law of Goya, shortly before his death is shown here.

A tired, slightly annoyed expression on his face and a casually buttoned coat characterize the personality of the model. At the same time, a frozen posture, a characteristic bend of the hand, and an attentive gaze emphasize the inner dignity of the person being portrayed. 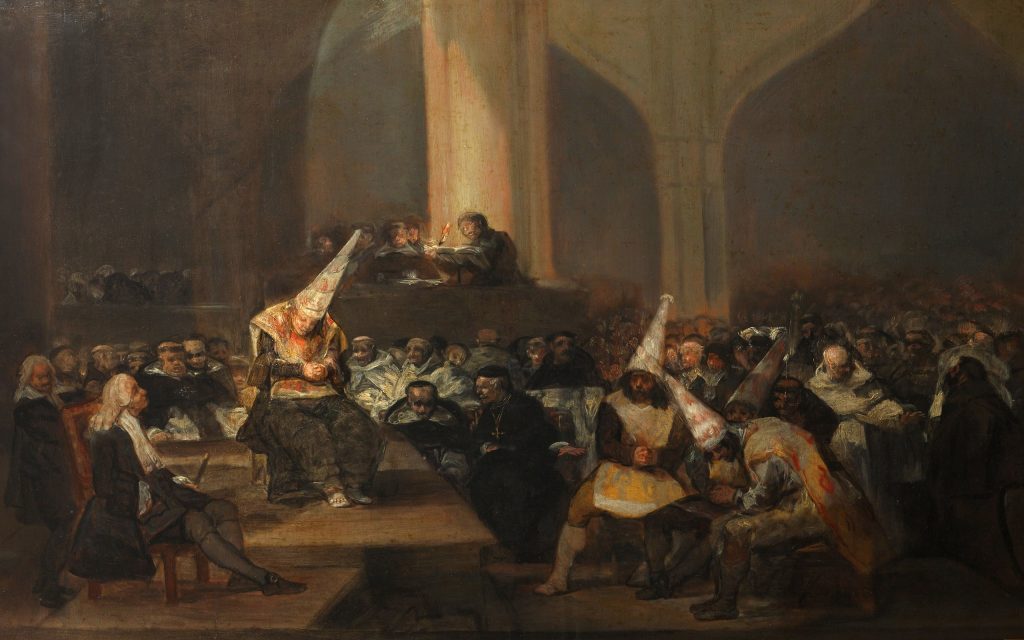 Francisco Goya repeatedly turned to the theme of the Inquisition’s court, emphasizing the cruelty of the ceremony and the tragic fate of his victims, who were wearing the caps of heretics. The lighting effects and the manner in which the colors are applied help to depict a trial led by obscurantists. The faces of the judges – monks and priests – are distorted by grimaces of death, and their figures merge into a single amorphous mass. 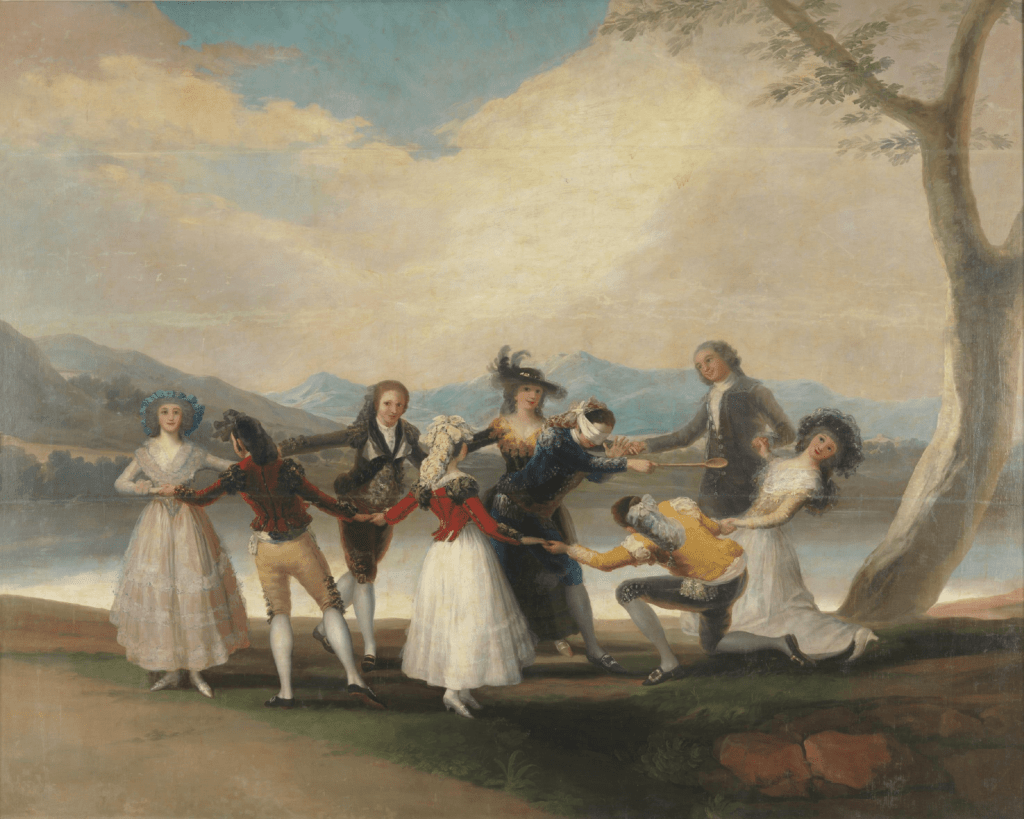 Scenes of everyday life and folk entertainment, which are characterized by the richness of colors and ease of composition, have shown new trends in the artist’s work. Goya reveals the real world in all its infinite diversity. The attractiveness of this sketch for a tapestry designed to decorate a study in the Escorial Palace is manifested in bright colors, in the ease of movement of the characters.

For Goya, the image of figures in a gentle, watercolor coloring is typical, the figures of the characters seem to dissolve in a thin haze. 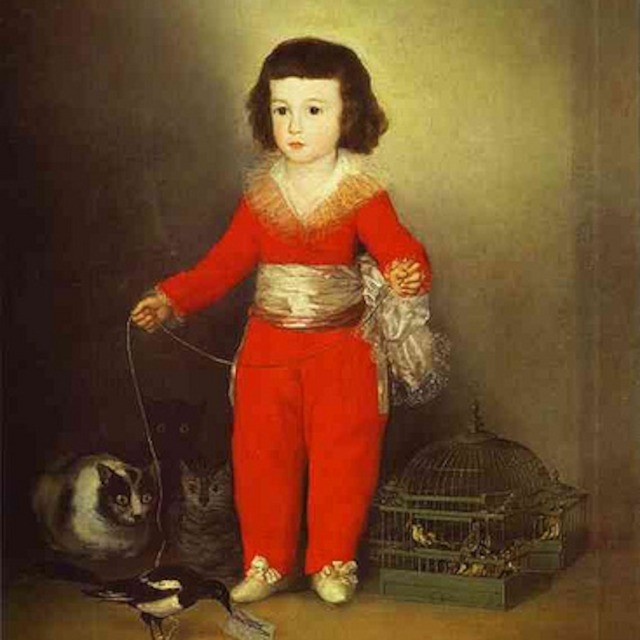 This canvas depicting little Osorio, born in 1784, is one of a series of cross-section portraits commissioned by Count Altamira. A child, dressed in a bright red suit, is placed against a monochrome background, which accentuates his figure. The kid holds a string tied to the paw of a magpie, which, justifying its fame as a “thief”, holds in its beak the artist’s business card, who in such an original way places his signature at work.

Other animals depicted in this one of Goya’s paintings contain a symbolic meaning, indicating how illusory the border between the naive childish world and the forces of evil that lie in wait for it.

Goya’s genius was a unique phenomenon in Spanish art at the turn of the 18th and 19th centuries, which he elevated to the grandeur of earlier times. His art passed through the last period of Rococo, reaching the threshold of realism and opening up in a huge variety of subjects. In his portraits, anticipating romantic ideas for almost a century, the Spanish master managed to reveal the psychological essence of the characters through their appearance.

The Countess of Chinchon(1800) 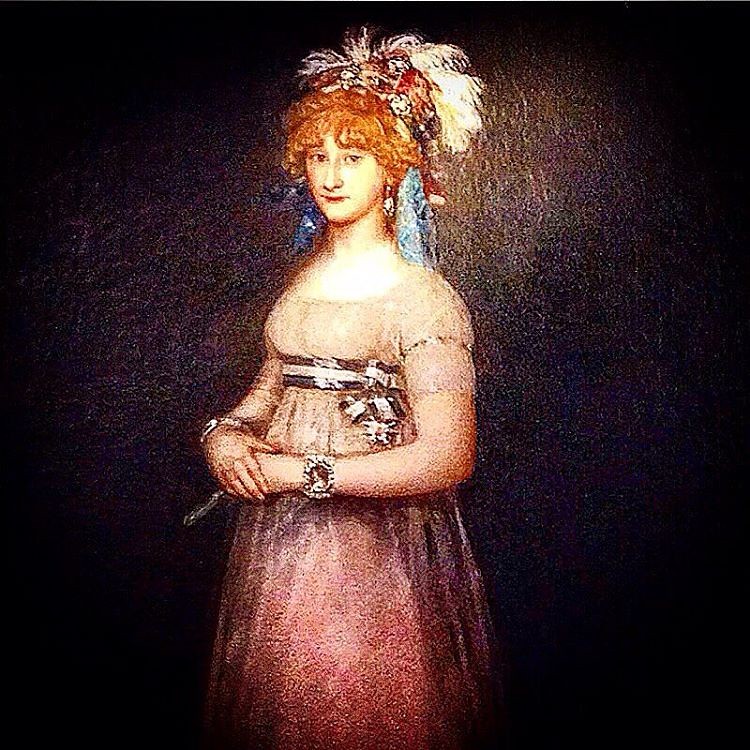 The elongated format of the picture and the deepening darkness as a background gives the countess’ figure a special fragility, accentuated by a light, airy dress of light gray-brown color with pink veins and a hairdo in which the wind seemed to lurk. In the whole appearance of the girl, even if of a royal family, one can feel the sadness that comes through both in her loving brown eyes and in her folded hands, which Maria-Teresa seems to be deliberately trying to squeeze tighter.

The Countess was then experiencing not the best time in her life: her husband, the almighty prime minister of the Spanish government, Don Manuel Godoy, had a domineering character, in addition, this man was the queen’s lover.

Francisco Goya had already drawn the Countess, and now, knowing this young woman well and treating her with sympathy, he noticed her deeply hidden sadness.

Another curious fact is also associated with this picture. After the Prado Museum bought the paintings from a private collector for 24 million euros, it turned out that over this portrait,  a portrait of the Marquis de Villafranca, and on top of it was a portrait of the husband of Countess Manuel Godoy was painted. 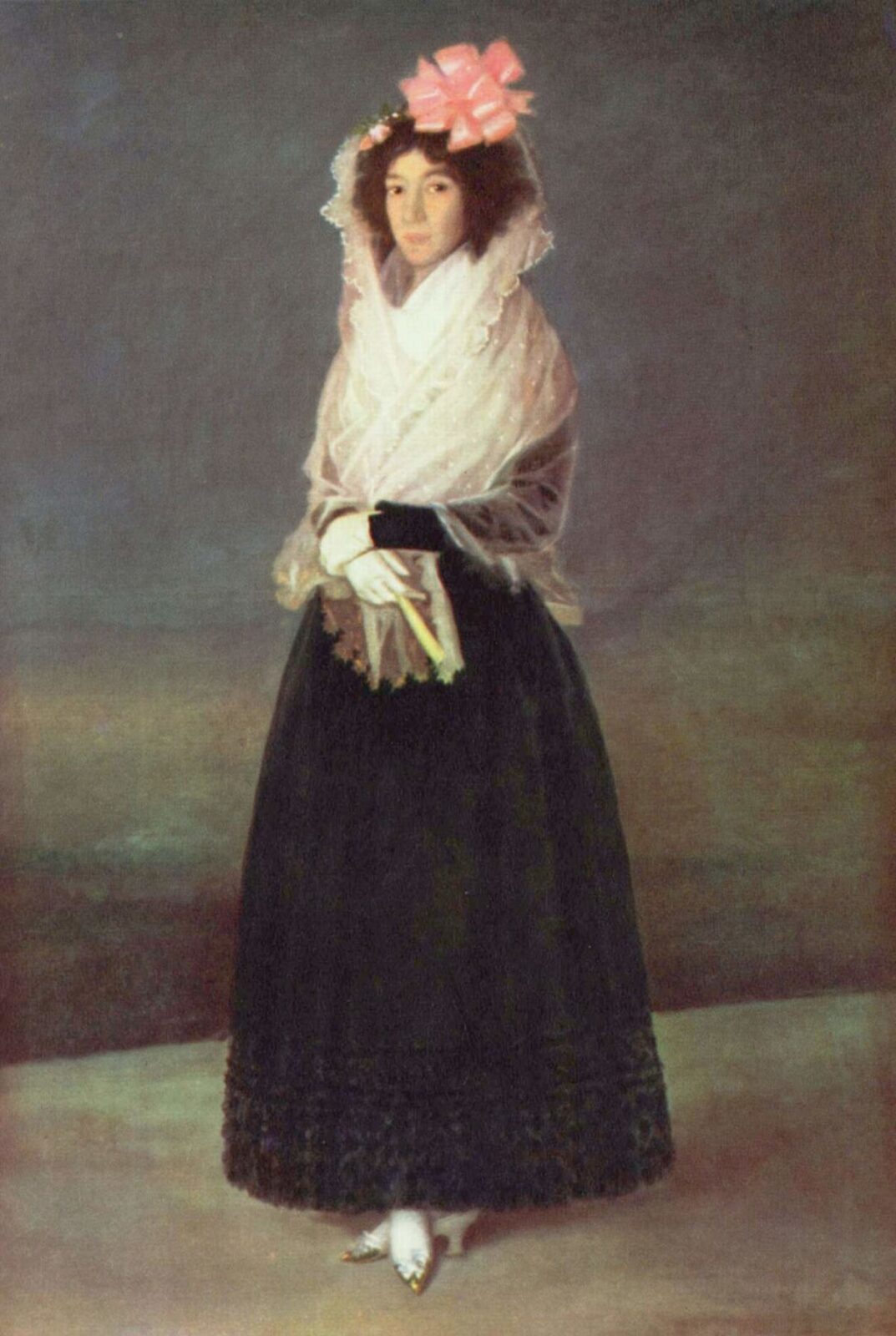 The artist of Spanish romanticism Francisco de Goya (1746-1828) is famous for his portraits of aristocrats. A gallery of images of the Spanish nobility was created by the hand of the court painter. The most popular are his female portraits. Goya’s women are always mysterious, despite the detailed elaboration of dresses and accessories, there is always a lot of unsaid in their appearance.

This also applies to The Countess del Carpio, Marquesa de La Solana, one of  Francisco Goya’s best paintings. The slender figure of the Countess clearly stands out against the dark background, usual for Goya’s portraits. She is wearing a strict black dress and wrapped in an airy light shawl.

There is an insurmountable psychological barrier between her and the viewer, erected by an arrogant model and skillfully conveyed by the artist. The background, against which several vague plans receding into the distance are guessed, gives rise to the feeling of something fatal, mysterious, and inevitable in her personality.