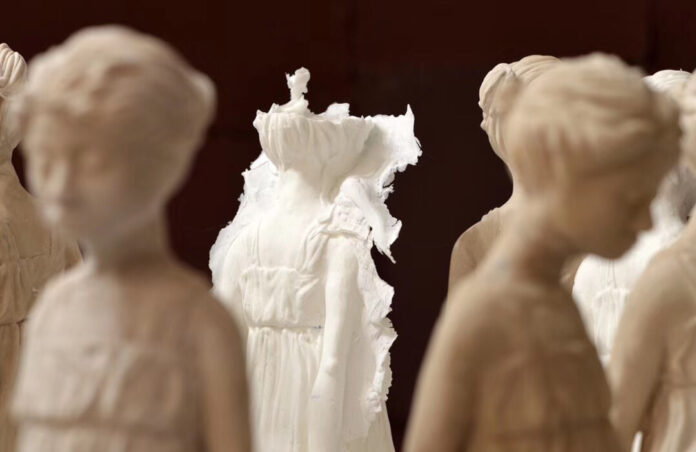 Answer:  “Tu Zi’ ‘intends to reveal a secretive group of young people, who are having issues like anorexia and bulimia. This group of people usually called themselves ‘Tu Zi’ or ‘rabbits’ in Chinese pronunciation. However, the cutesy name in fact has a real dark connotation – “Tu Zi” could also mean “vomiters”. The behavior of vomiting and purging has become a secret for those people. They ate like a horse at the dinner table. After that, they hid behind the door inside the bathroom and let the undigested food pour out of their mouths. The public is still unaware of these diet issues and health problems. The reason why I picked rabbit as the core element of “Tu Zi ” is because I want to increase people’s awareness of health problems and abnormal aesthetics. 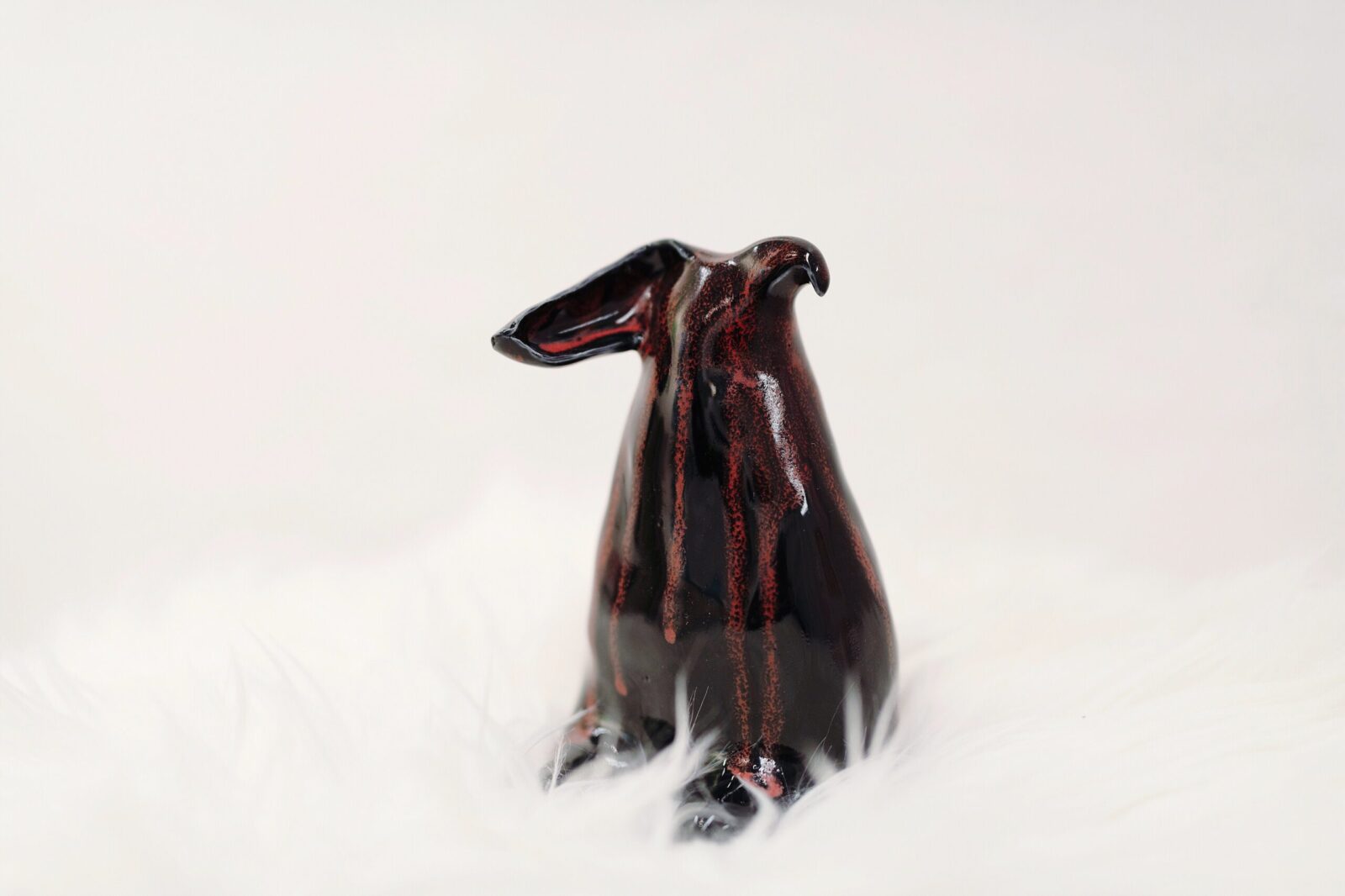 Answer: Definitely. When I first designed it, I made some really cute rabbits with pink color. However, the final version of “Tu Zi” is the series of biomorphic ceramic sculptures in different shapes based on growing fungus or an organism. Each of them contains holes that share the similar look of  a human mouth. By modifying the appearance of the artwork, I eliminated the pure cuteness in the original design and emphasized the social conflict behind the cuteness. Compared to pure cuteness, I added some discomfort to “Tu Zi”. The reason was that I hope people will notice that there are some violent factors behind cuteness. I feel like this artwork can tightly be in line with my artist statement. 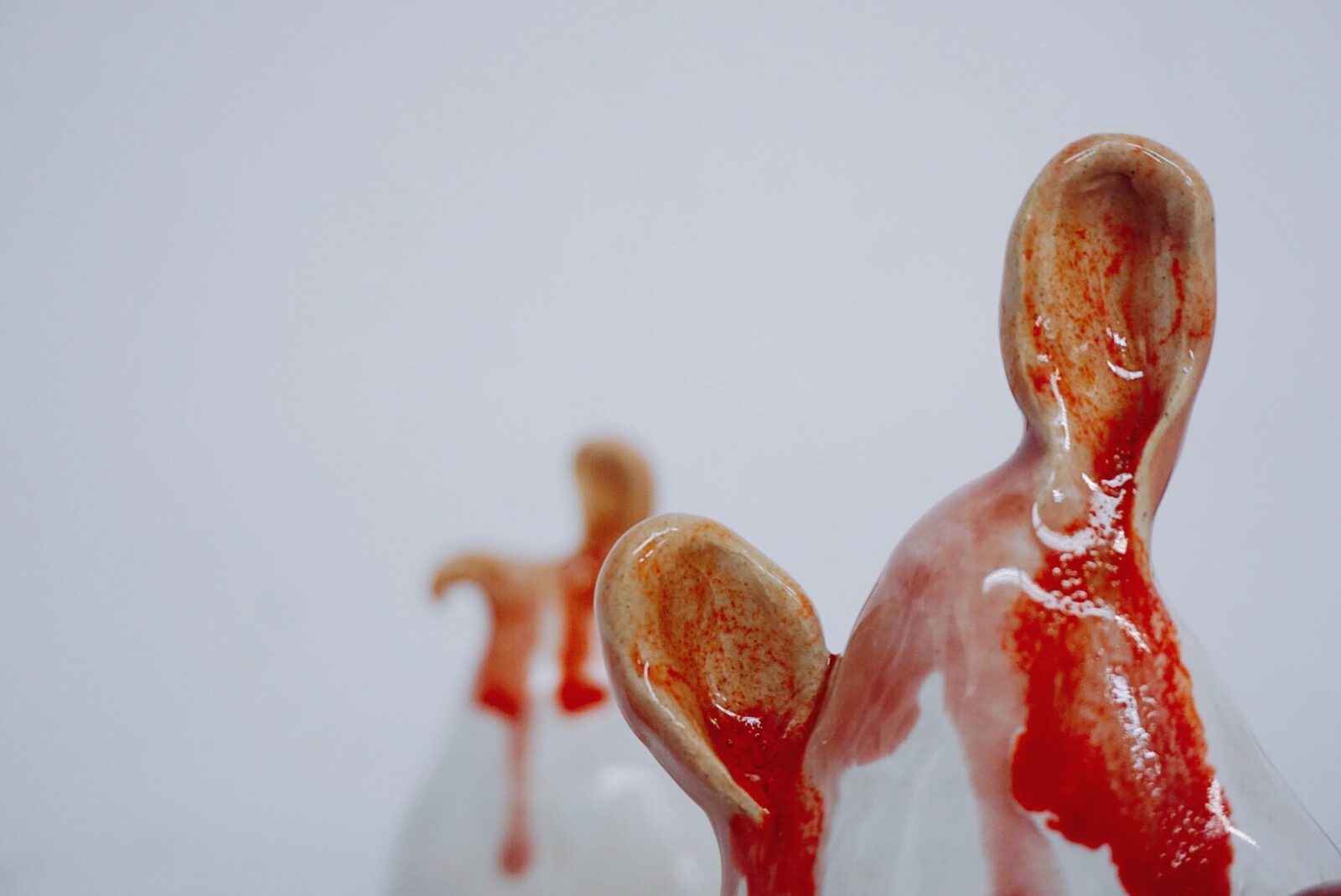 Answer: Like some of the paintings and sculptures I have created before, they looked small and cute. But in my mind, “cuteness” is not a positive word, because it kind equates to being worthy of love. Actually people are more willing to protect those small, easily injured, and weak stuff, and call it “cute”. But behind the word, there is also a stereotype and a desire for control, which is the darker side behind cuteness. This fact is really worth thinking about. I want to convey through my artwork that there is something, maybe including people as well, which may look cute, but they do have some hidden personalities that are unknown by most of us. I hope that people will explore and redefine the deeper meaning of “cuteness” through my artwork. 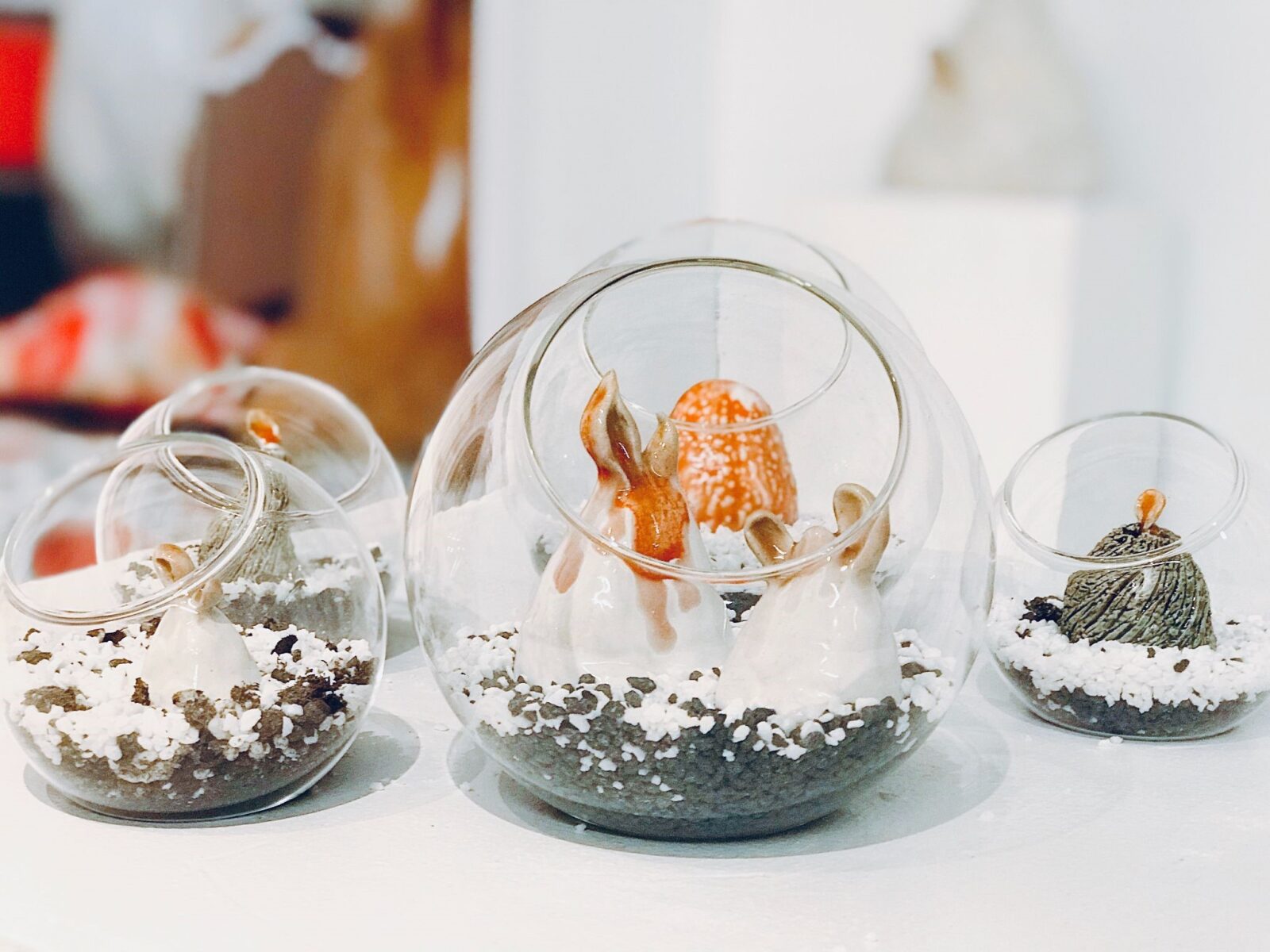 Answer: Honestly, it was not that easy.  After graduation, I applied for Pratt Institute with a major in communication design. The program was great, but it emphasizes design as a means for organizing information and creating compelling user experiences. It means I should engage in identifying and solving design problems within cross-disciplinary environments. Personally, I believed that artists perform an essential role in society. I would like to focus more on the formal and aesthetic investigation, and then move to the social and political engagement from there. That’s the reason why I reapplied for the graduate school and finally became a student at the New School Parsons with a major in Fine Arts. With the help of my mentor, I got a deep understanding about my skills and interest, so I decided to focus on the ceramics and sculpture.

Answer: I am thinking about “Mini House”. Visually, it shows a smaller world from a novel perspective. I like the unreal and dreamy environment I have created, because it can give my audience a space to discuss the relationship between my artwork and the reality/real world. 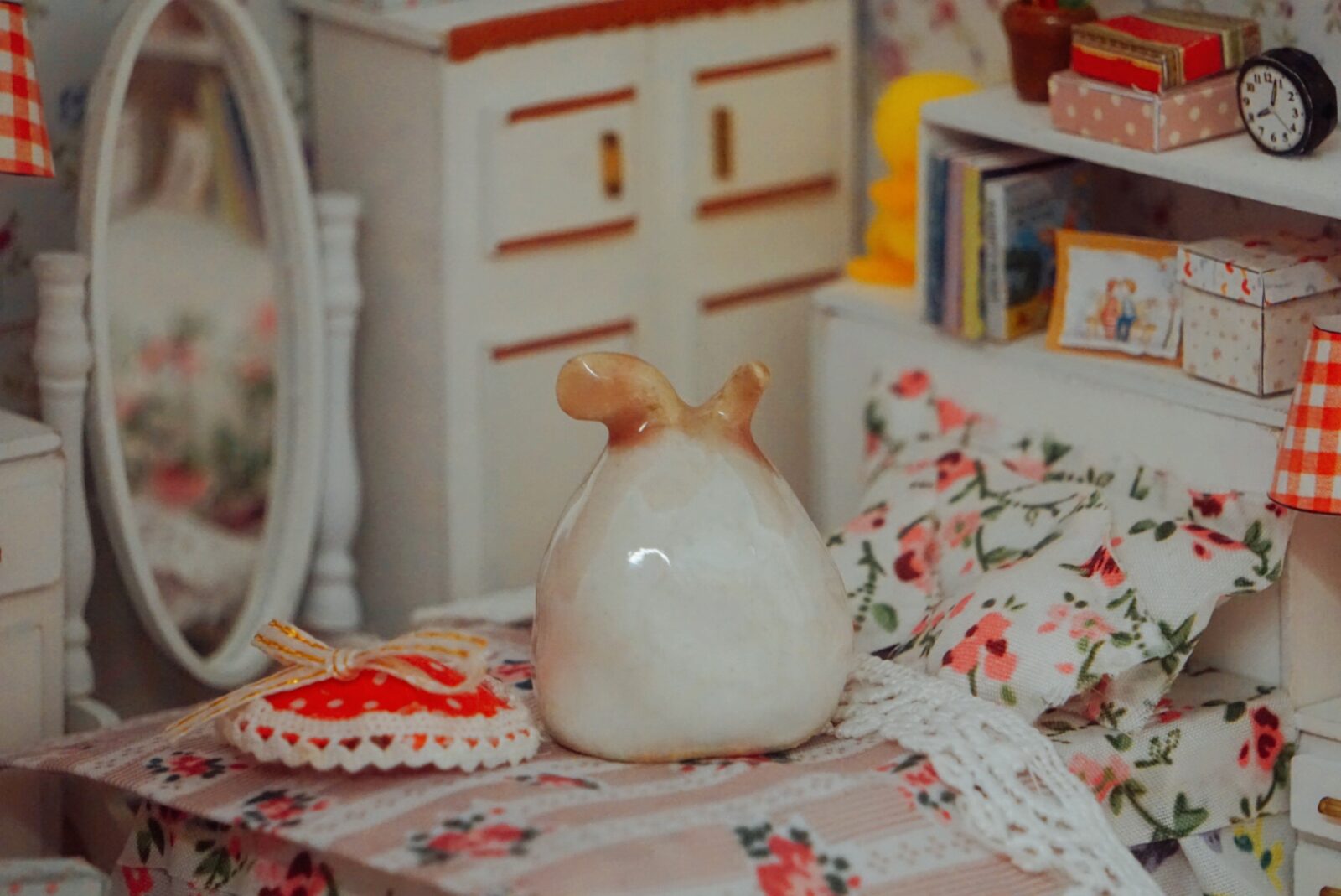 Answer： “Alice, Wake Up” originates from the classic fairy tale Alice in Wonderland. At the end of the story, the self-awakening of Alice enables her to escape from the wonderland and return to the physical world. We interviewed many artists at that time when we did the preparation and carefully selected some artworks. They created the seemingly harmless, innocent, and humorous works as victims, bystanders or healers to criticize and question families, societies, others, and even selves, inadvertently or intentionally inflict physical or mental harm on the objects. In other words, they mainly focus on the world beyond reality and bring some feelings back to reality through their works. We would like to express self-awakening in our exhibition, so this name is the best description to the theme. 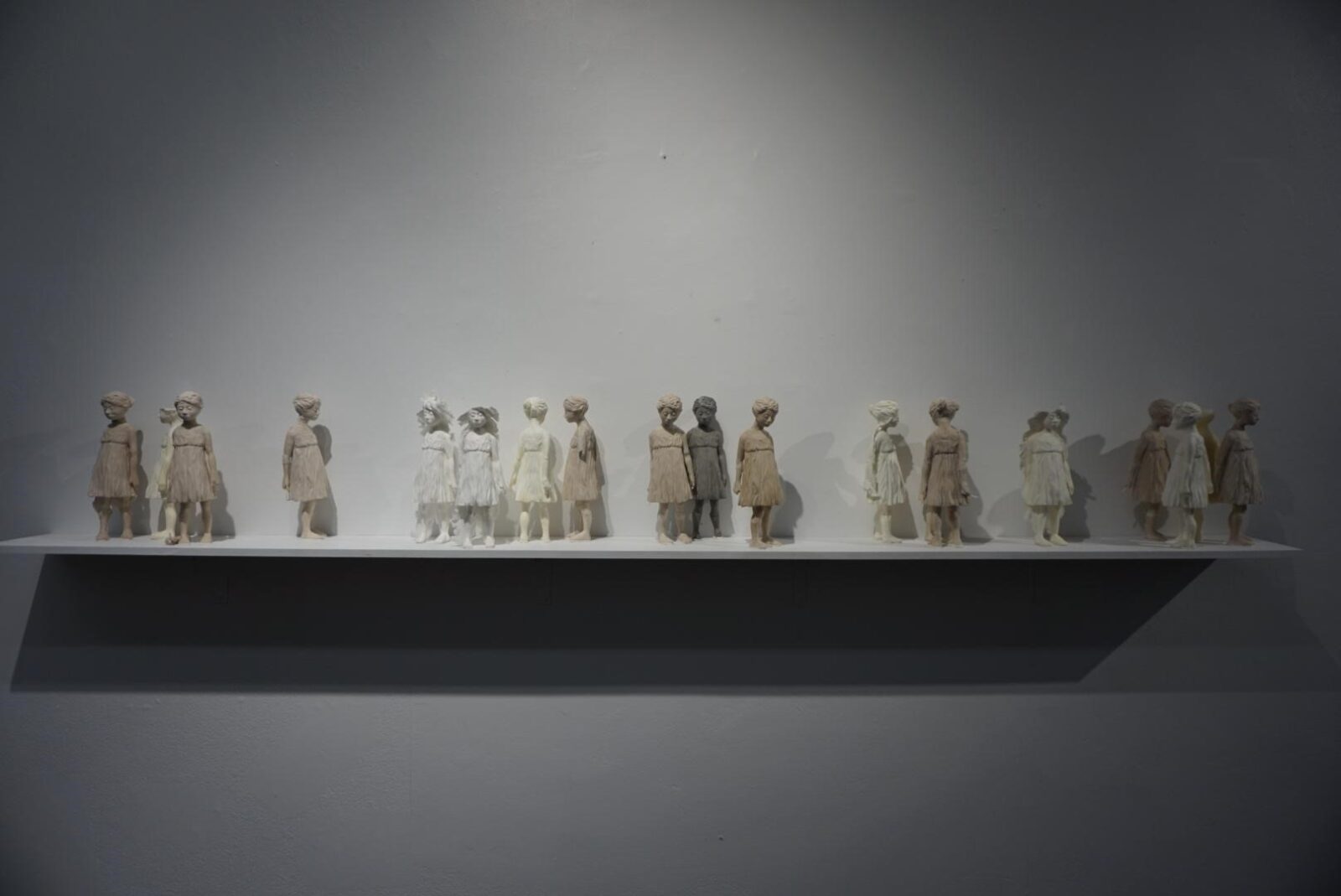