Home Art Women who draw: online catalog of 5000 illustrators from around the world 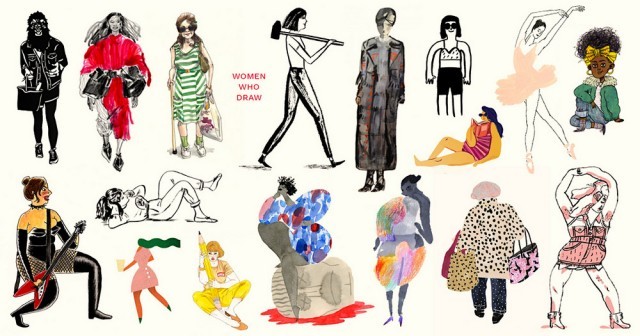 The online catalog Women Who Draw was launched to create a space to present women illustrators and cartoonists from around the world, discover new talents, and help artists find customers. The WWD database already has over 5,000 entries with a stunning array of images and styles. In addition, the platform has become an inspiring resource for amateur drawers, professionals, and art lovers.

Women who draw is an open catalog of artists professionally engaged in illustration and caricature. It was created by Julia Rothman and Wendy McNaughton in response to the lack of gender parity among the artists who authored the covers of the famous magazine.

The idea of creating Women Who Draw originated with Julia Rothman when she leafed through old issues of the popular magazine and noticed that most of the covers were illustrated by men. After looking through her entire collection, she calculated that out of 55 issues in 2015, only 4 covers were created by women. Rothman contacted McNaughton and they decided to act. At first, they wanted to go public with the magazine’s management, but they changed their mind. Instead of discussing the problem, they decided to solve it.

The activists came up with the idea of launching a website that would serve as a showcase for talented women illustrators from around the world so that magazines, newspapers, advertising agencies, and publishers could easily hire them. Women Who Draw was launched in early 2017. We can say that Rothman and McNaughton have achieved their goal. The platform has already brought together thousands of artists, some of whom have begun working with such publications as The New York Times, TED, The Globe, Bust Magazine, and Bitch Magazine.

Those wishing to join the community should be a woman (or feel like one), have a website and clients (be a professional artist), upload an illustration of a woman on a white background, preferably full height. It is this image that becomes the icon-identifier to represent the artist in the catalog. These amazing illustrations make up the main page of the site. Under the picture, in addition to the location of the artist may indicate their religion and ethnicity/race. In the catalog there is an author for every taste, working in every style and with a variety of experience.