Home News 7 Questions for Parisian Dealer Kamel Mennour on the Expanding Horizon of... 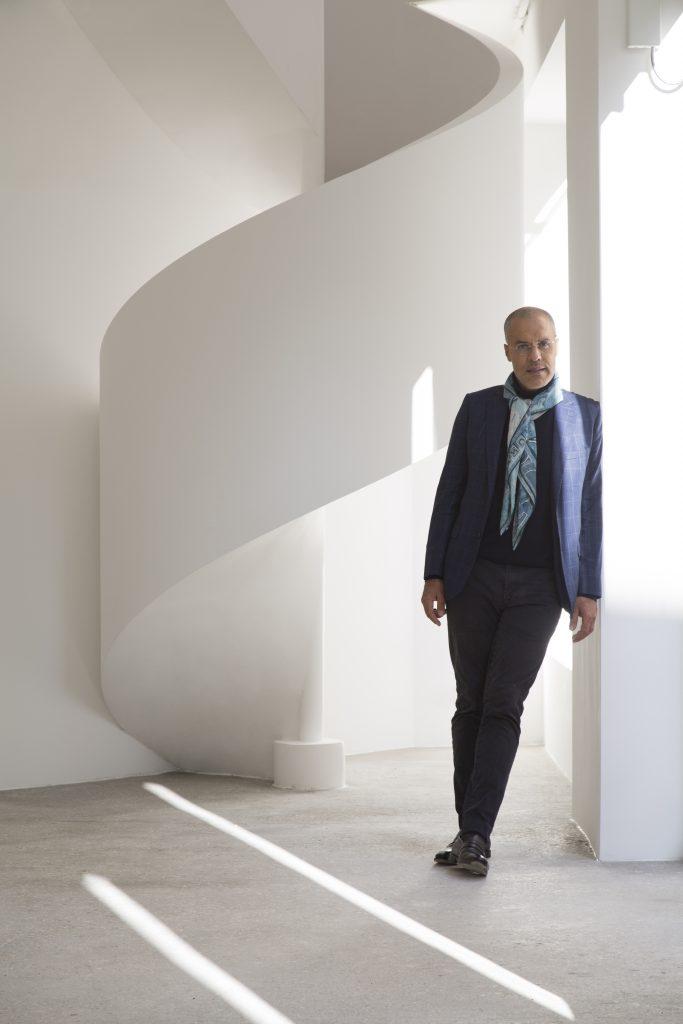 For over two decades, gallerist Kamel Mennour has championed contemporary art and its worldwide dissemination. He founded his eponymous gallery in Paris in 1999 and since then has expanded to multiple locations throughout the City of Light. Through these spaces and the gallery’s participation in major art fairs and collaborations with cultural institutions worldwide, Kamel Mennour gallery has become known internationally for its diverse and fascinating roster of artists as well as for its compelling exhibition program.

Launched in the midst of the pandemic lockdown, the gallery’s online viewing room (OVR) has added another dynamic dimension to its exhibition program. The platform features a themed exhibition series, which provides access to the art and artists Kamel Mennour presents to a much broader audience. Additionally, many of the digital shows complement physical exhibitions staged at the gallery. These include highlights from art fair booths or installations that are too large to be shown in the traditional gallery space, amplifying the work and voice of the featured artists.

We reached out to Kamel Mennour to learn more about the inception and execution of the gallery’s OVR program and how it’s been received by the art world at large. 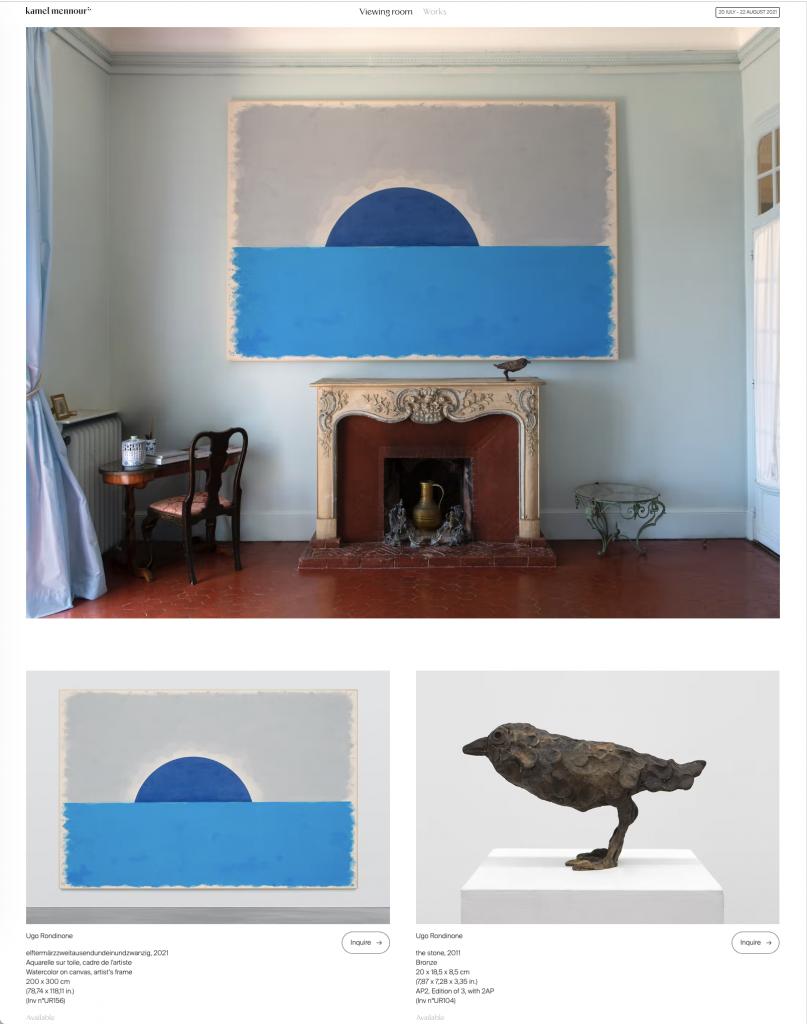 Kamel Mennour gallery was established in 1999 and has seen incredible growth over the decades. What are some of the gallery’s guiding principles? How is this reflected in the artists represented and exhibitions shown?

The energy that the gallery pours into the promotion of its artists is motivated by a vision of bringing different generations of artists and different periods of art history together in order to permanently reevaluate what contemporaneity is in art.

It is reflected by the dialogue we create between the 40 living artists and artistic estates we do represent, from among the most significant in the field of Modern and contemporary art, including Daniel Buren, Alicja Kwade, Ugo Rondinone, Camille Henrot, Lee Ufan, Latifa Echakhch, Anish Kapoor, Ann Veronica Janssens, Bertrand Lavier, Zineb Sedira, Douglas Gordon, Mohamed Bourouissa, Huang Yong Ping, Jean Degottex, Judit Reigl, and François Morellet—to some of the most promising, such as Ymane Chabi-Gara and Dhewadi Hadjab, for instance.

The gallery and its four exhibition spaces are situated in Paris, and yet, through the international dimension of our artists, the projects we developed in partnership with cultural institutions worldwide, our presence in major art fairs around the world, and their network of collaborators, the gallery has a constant presence from Asia to the Americas, and from Africa to the Middle East.

Galleries and the art world at large have experienced some major changes over the past several years. Have you observed any specific developments—or do you have any predictions—for the art market that you find particularly intriguing or exciting?

Indeed, there have been a lot of changes, the first one being the importance of digital activities and the advent of social media in our lives. What is positive is that it has augmented the way we work with our artists, and how we conceive of and communicate about our projects.

Yet to me, the most important twist is in regards to the type of audience—a consequence of the above certainly—being that before 2020, the percentage of our visitors between 18 and 35 years old was 16%. We now reach around 25%!

The gallery’s OVR program is notably expansive and sophisticated. When did it start, and what are some of the aims of this digital platform? What has been the response from collectors and online visitors?

The responses from our audience regarding the OVR are extremely positive, and the engagement of visitors is extremely high, specifically from this 18- to 35-year-old segment. It is a new way to create conversations and build long-term relationships.

We put as much energy into it as for our physical exhibitions, which means that we conceive of it as a consistent artistic platform, specifically curated in dialogue with the artists, and with a whole team—a sales director, digital manager, and an archivist—behind it. It is not just showrooms or a marketplace, but our fifth exhibition space.

We launched the OVR website during Covid-19 restrictions, at first to maintain activity for our artists who were severely affected by the lockdowns. We were indeed astonished by the immediate support from visitors and collectors; we even witnessed immediate online sales in the very first moments after the launch. We are pleased that these then-new digital habits continue to live on beyond the crisis period. 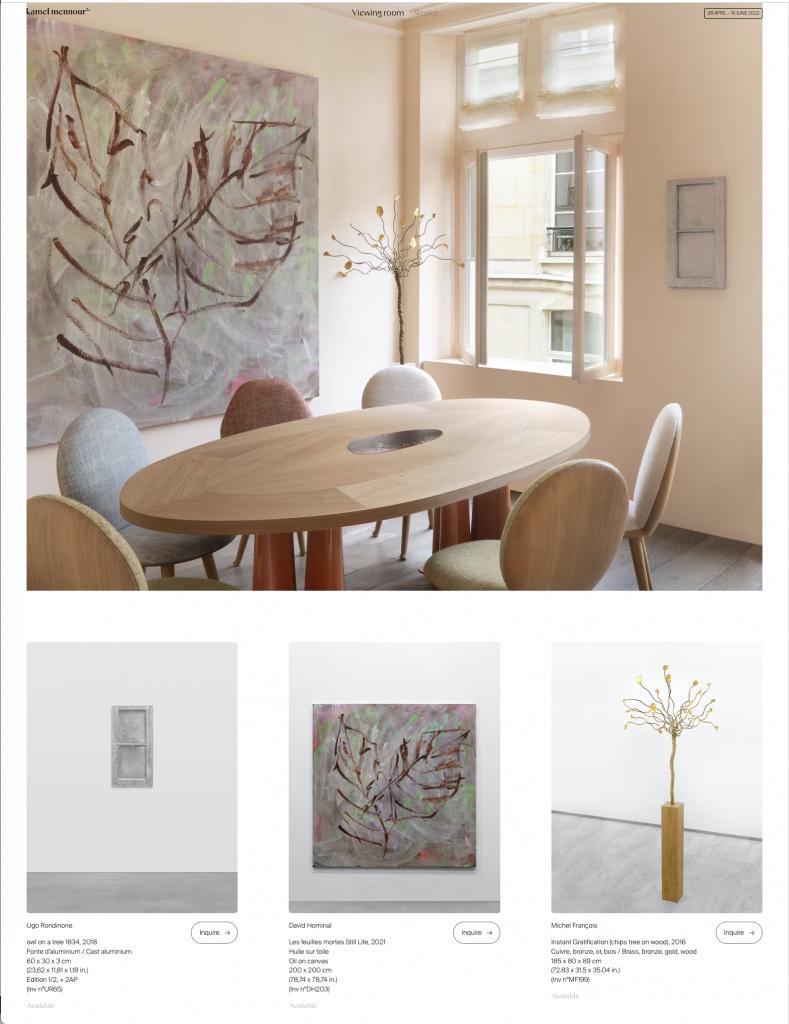 Can you talk about what is shown in your online viewing rooms? How does it differ (if at all) from the types of exhibitions shown in the physical gallery spaces?

Our OVRs are articulated around “series” and highlights. We recently launched a series called “Papier,” showcasing works on paper. The first edition was in collaboration with the American artist Matthew Lutz-Kinoy, in parallel to his solo exhibition at the gallery so as to create a “Cabinet de Dessins.”

Another example is our “Iconic” series, which focuses on one major historical artwork from the 20th century. There we bring research as well as extremely thorough documentation to the work, shining new light on the masterpiece. This series is a true goldmine of information and offers a precious opportunity to showcase material we could not bring to a fair booth or into any physical space.

Our biggest success for now, in terms of views and sales, is the series called “A Summer at,” “Spring in,” and soon “Wintertime in,” which are obviously attached to seasonal destinations, and showcases artworks in dreamlike, domestic environments. Whether it is in a familial home nearby the sea in the south of France, a chalet in Switzerland, or in a magnificent hotel such as [designer and interior architect] Pierre Yovanovitch’s. It is an occasion to escape the traditional white cube display.

The OVR also provides the opportunity to show monumental projects such as Alicja Kwade’s installation on Place Vendôme during Paris+ by Art Basel or the (2019) installation by artist Huang Yong Ping shown during Art Basel Unlimited.

Last but not least, it’s an opportunity for projects I care very much about to be spread beyond our walls. Projects such as the auction I initiated in aid of the Imagine Institute and research into genetic diseases.

What do you think are some of the benefits of the OVR both for Kamel Mennour gallery as well as the gallery world in general?

Kamel Mennour gallery has an international dimension and is recognized all around the world for its artistic program, roster of artists, partnerships with cultural institutions, and its presence at major international art fairs. Yet, our physical spaces are all in Paris. This strategy, which was decided on a long time ago, represented a challenge at the time. Now, more than ever, we feel that the rush to open new spaces in fancy places is outdated. Digital possibilities have so much to offer, and I’d rather investigate that dimension.

I am super excited about the future of this, and how we can continue to create exciting projects, improve the collectors’ experiences, and create new ways of showing and buying art online! 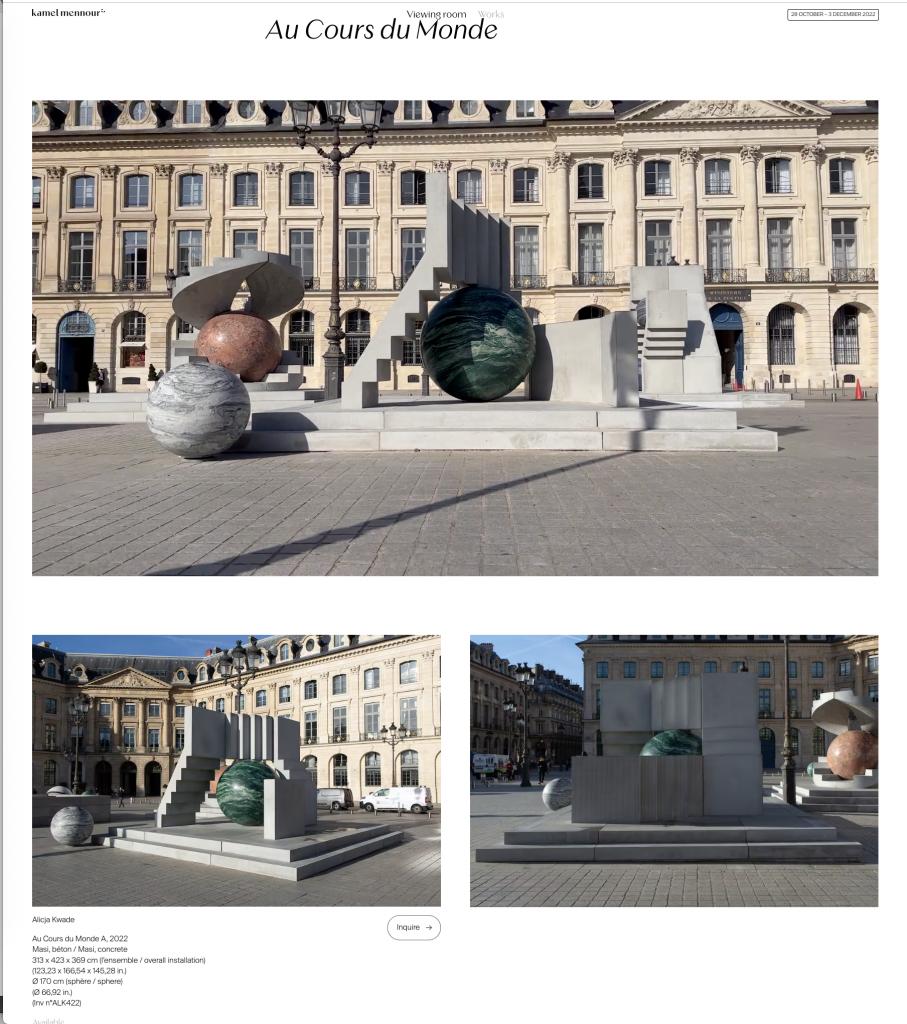 The gallery also has several exhibitions on view in its physical spaces. Can you tell us briefly about them?

Just among our four exhibition spaces, we do organize about 30 exhibitions per year whether they are solo or collective shows.

The online viewing rooms allow us to think of additional projects that we would not show in our spaces.

Whether it is physical or digital, I want our global program to contribute to and foster the dissemination of contemporary art with a wider public in a sustainable way.

With the New Year just around the corner—what’s next? Is there any news or are there any developments on the horizon for the gallery that you can share with us?

Last year marked the development of the gallery’s cultural dimension, embodied by an important series of recruitments arriving from major institutions such as Musée d’Orsay and Institut Giacometti: Christian Alandete joined the gallery as Scientific Director, and Sylvie Patry came on board as Artistic Director.

In the year to come, the gallery will continue this expansion, and you will be able to appreciate that very soon. For now, however, it is a secret!