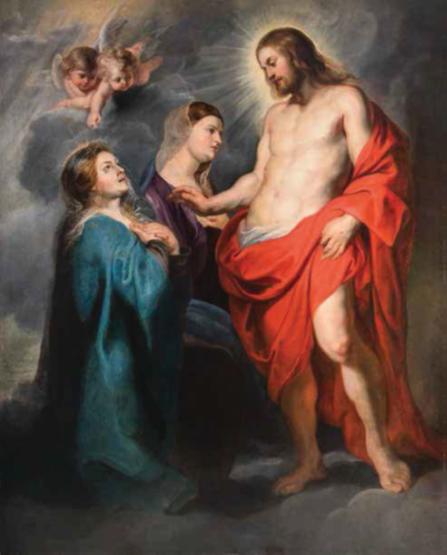 Last week, Italian police pulled a Peter Paul Rubens painting from a Genoa exhibition, citing an investigation into the artwork’s two owners, who have been accused of money laundering and illegal exportation.

Now, according to the Art Newspaper, the 17th-century canvas has been returned to the show, called “Rubens in Genoa.” However, the probe into the owners continues, as law enforcement officials look into how they allegedly smuggled the painting out of the country a decade ago in an elaborate plot to boost its market value.

At the heart of the case is The resurrected Christ appears to his mother (c. 1612-16), a six-foot-tall painting, attributed to Rubens and his workshop, that depicts the Madonna kneeling before Christ in a cobalt blue cloak. On view now alongside 18 other Rubens works in Genoa’s Doge’s Palace, it is insured for €4 million ($4.2 million).

The artwork’s current owners acquired the artwork from the noble Cambiaso family for €300,000 in 2012, according to the Carabinieri agency for the protection of cultural heritage in Genoa.

However, just two years later, in 2014, the purchasers, along with an accountant and his son, exported the piece to Prague by claiming it was created by an unknown Flemish artist and was worth only €25,000.

They are believed to have obtained an export certificate from an accomplice who worked at the superintendent export office in Pisa. That same office was temporarily shut down in 2019 due to “irregularities” in the issuance of other certificates, the Italian newspaper Corriere della Sera reported.

The four suspects then established companies abroad to stage fake sales of the Rubens painting in an attempt to bolster its worth.

In 2015, conservators controversially removed a layer of the painting’s surface to uncover a second woman between Christ and the Madonna, likely from an earlier iteration of the composition. “The figure in question will be the subject of further investigations,” the Carabinieri explained.

That’s a safe prediction, and not just because of the legal investigation surrounding the painting. Questions over whether Rubens was indeed the artist behind The resurrected Christ appears to his mother have been raised in recent years as well.

“No Genoese source and no document attests the reference to Rubens of the painting exhibited in Genoa,” Vittorio Sgarbi, an art historian now serving as Italy’s undersecretary to the culture minister, said in a statement to La Repubblica. He alluded to the “uncertain quality of the work” and noted that the “history of the art lived for three hundred years without this improbable Rubens.”

“I invite those who have carried out the preliminary investigations, who have led to the seizure of the work, to greater prudence and rigor in evaluations, to avoid embarrassing mistakes,” the undersecretary went on. “Criminal liability cannot be assumed for a controversial attribution, deviated from the illusory and presumed market value.”

In response, the Genoa show’s co-curator Anna Orlando said that “the work is not under discussion.” Orlando pointed out that the exhibition’s other organizer, Nils Büttner, is “the highest authority on Rubens in the world.”