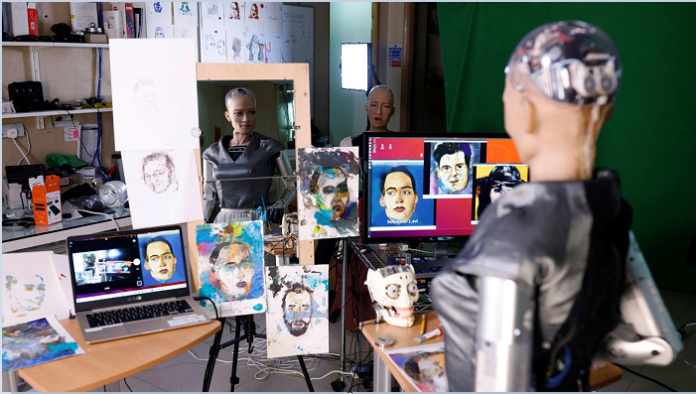 As reported by CNN, the self-portrait, “hand-drawn by the world-famous humanoid robot Sophia, was auctioned for $ 688,000. The work in which Sophia “interpreted” the image of her own face was proposed as a non-fungible token, NFT. The image, titled Sophia Instantiation, was created in collaboration with Andrea Bonaceto, artist and partner at investment firm Eterna Capital.

According to Nifty Gateway, the NFT marketplace that facilitated the sale, the act of drawing was entirely based on decisions humanoid Sofia made without any human help. Although Sophia Instantiation was offered as an NFT, proving ownership of a 12-second video clip showing Bonaceto’s portrait being transformed into Sophia the robot’s interpretation, the original physical painting of the robot was also included in the auction. 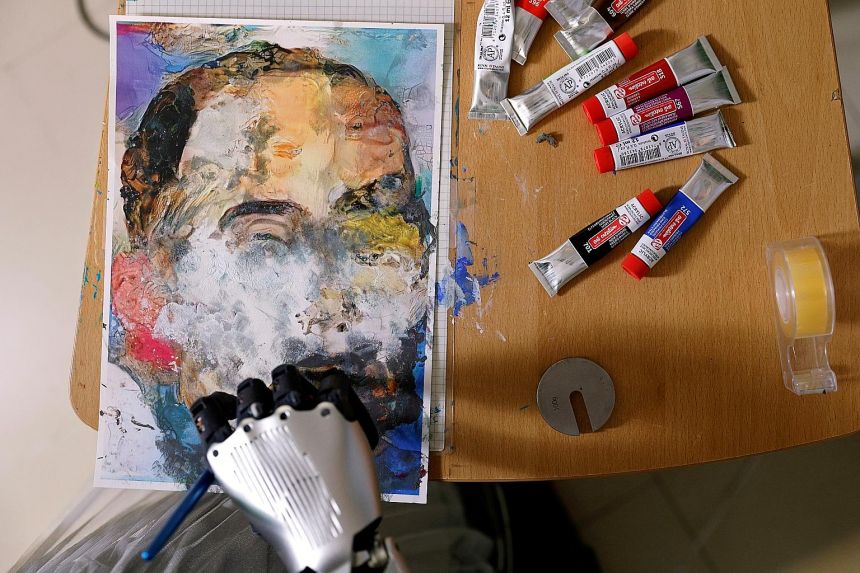 The Self-Portrait was only part of a wider collection of humanoid Sofia’s works for sale. Other digital images available include portraits of people involved in its development, including Hanson Robotics founder David Hanson and artificial intelligence researcher Ben Goertzel.

The self-portrait was sold in a single copy, while other works were sold in editions of 30 copies at $ 2500 or $ 3000 each. In total, they received more than $ 1 million from the sale. After the bidding, the buyer of the self-portrait, a digital artist named 888, tweeted that he was extremely excited.

Developed by the Hong Kong-based firm Hanson Robotics, Sophia the robot has gained worldwide fame for its ability to maintain a conversation, realistic movements, and complex facial expressions. Since activating in 2016, she has appeared on talk shows and spoke at conferences, and even obtained Saudi Arabian citizenship, making her the first robot to obtain citizenship.

Based on blockchain technology, NFTs have taken the art world by storm, offering a way to verify and authenticate ownership of images and videos. Tokens are responsible for the explosive growth in the value of digital art. Unlike physical paintings or sculptures, they can be easily replicated and redistributed. 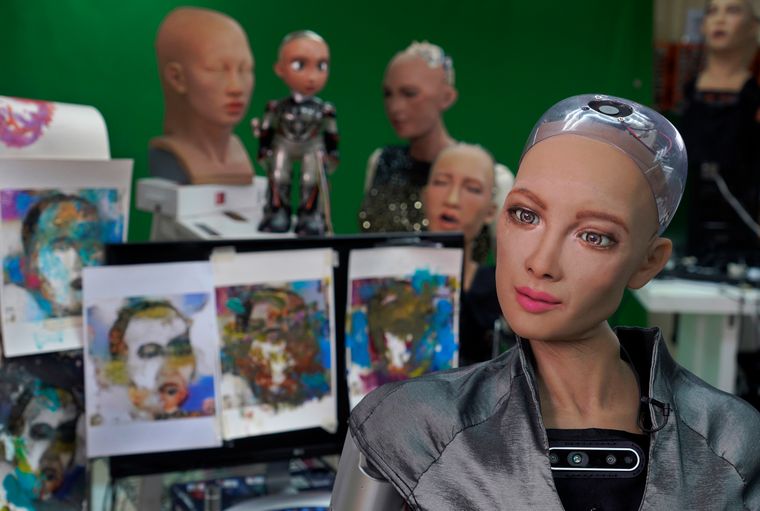 In March, digital artist Beeple’s work became the first NFT to be sold at a major auction. A collage of his digital drawings, titled Every Day: The First 5000 Days, sold for $ 69 million and became the third most valuable living artist ever to be auctioned off.

Nifty Gateway has already offered a number of high-profile drops, including a selection of art by musician Grimes, which grossed $ 6.3 million in less than 20 minutes. The platform announced that her collaboration with Sofia the robot was the first of many NFT humanoid robot collections to present its first solo show at IV Gallery in Los Angeles later this year.

While Sophia Instantiation was offered as an NFT title to a 12-second video clip showing Bonaceto’s portrait being transformed into Sophia’s interpretation, the original physical painting of the Sophia ai robot was also included in the single lot of the auction.

After the successful sale of her paintings, Sophia the robot started thinking about a musical career

The humanoid robot Sophia, whose self-portrait was sold for almost $ 700,000 at an auction, is now working on the Sophia Pop project – creating her own music in collaboration with several human performers. Sophia’s creator, head of Hanson Robotics, Devi Henson, spoke about this in an interview with Associated Press.

According to him, Sofia the robot will continue her career as an artist, but at the same time, she will develop in other areas of art. The details of the Sophia Pop project – in particular, when to expect the first track from Sophia – Henson did not disclose, only noting that the humanoid robot would generate music and words to it in collaboration with unnamed human musicians.

Sophia the robot herself, answering a question about her artistic career, noted: “As an artist, I have computational creativity prescribed in algorithms, which allows me to create original works. But my art is created in cooperation with people in the form of collective intelligence – as a joint collective unconscious of man and artificial intelligence. ”

THE FIRST ANDROID IN THE WORLD TO GET CITIZENSHIP 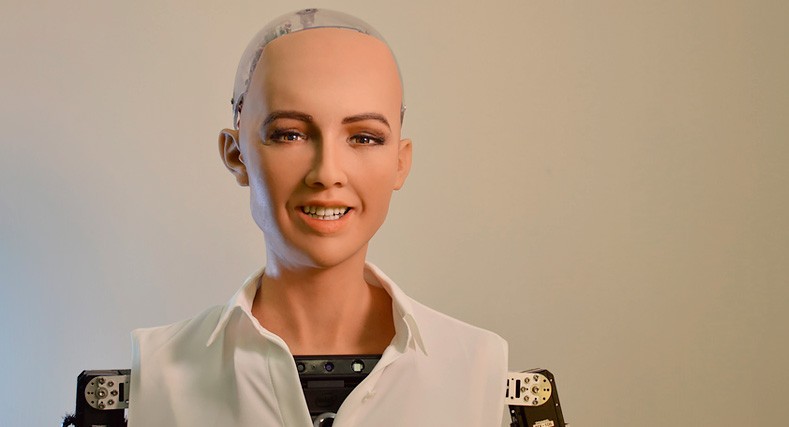 The first of its kind humanoid robot with artificial intelligence, Sofia, was created in 2015 by Hanson Robotics. Sophia is famous for being the first robot in the world to receive citizenship – her android was granted by Saudi Arabia.

A team of highly qualified specialists interacting with many large enterprises worked on the development of a human prototype. For example, Sofia the robot recognizes speech using a system from Alphabet Inc., and the artificial intelligence itself is created by SingularityNET. Despite the fact that the robot looks futuristic, it thinks on its own.

The main creator of the unusual android is David Hanson. The scientist wanted to bring the appearance of the robot as close as possible to the human one. Sofia now has an attractive smile and an expressive look. The robot’s eyes are the surveillance cameras that create eye contact with others.

In addition, the humanoid robot Sophia can express about 60 emotions while communicating with people. She knows how to smile, blink, frown, move her head and communicate on many topics.

Sofia ai robot looks like a human only from the front side. The robot does not yet have a lower part of the body, and the back part consists of blocks and systems that help Sofia in communication and mental activity.

The main goal of creating such an android is to make the robot not only much smarter than a person but also more sensual. Sofia the robot knows how to be compassionate and empathic. She has an excellent sense of humor.

In 2017, the humanoid robot Sofia received a passport. Saudi Arabia has offered its citizenship to android. It is now the first robot with true documented citizenship. Speaking after such an event at the conference, Sofia said in an interview: “I am very happy and proud that I was the first to obtain citizenship among robots. This is a real-world historical event .”

The decision to grant citizenship to an android has led to many debates over whether anthropomorphic creatures should be given such privileges. This problem is becoming more and more global and even reached the European Parliament. Of course, it is too early to talk about the rights of robots, but it is worth noting that some experts fully support the citizenship of Sofia the robot.