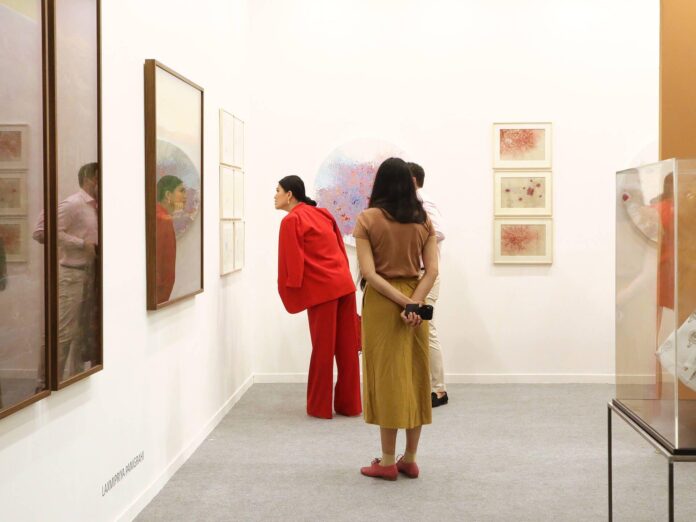 Pakistan’s bilateral trade freeze with India, which has been in place since 2019, shows little signs of thawing after an official announcement in May assured of “no change” to the situation. Relations between the nations remain at a 20-year low, due, in part, to India’s annexation of Kashmir; both countries claim the Himalayan region as their own.

Yet despite Pakistan’s vows to cut off all trade with India, imported goods from its eastern neighbour doubled to $142m between April and May this year—and that reflects only what is officially recorded. While this figure represents a tiny fraction of overall trade for either India or Pakistan, it underlines a widely known truth: exchange between the two nations will continue as long as their cultures are intertwined. And so it is with the region’s contemporary art trade which, despite numerous and increasing logistical hurdles, has been quietly working around simmering tensions since the industry began booming on the subcontinent in the early 1990s.

This has long been the case at India Art Fair (IAF), South Asia’s largest commercial art event. The fair, since its first edition in 2008, has made a concerted effort to include Pakistani artists in its programme and allow them to show in the booths of Indian galleries, as part of a wider strategy to act as a hub for South Asian contemporary art from beyond India.

But in recent editions, attempts to do so have become less feasible. At this year’s fair, held in April, its artist in residence, a London-based British-Pakistani painter, was denied a visa to visit India. He asks to not be identified by The Art Newspaper out of concern for future visa applications.

His situation is not unprecedented. Speaking to The Art Newspaper, IAF’s former director Jagdip Jagpal, who ran the fair between 2017 to 2021, says that in two editions she tried to organise solo presentations by Pakistani artists with Indian galleries. In both instances, these plans had to be cancelled due to visa complications. Jagpal also declines to name these artists so as to not hinder their future attempts to enter India.

It was not always this way. Even as recently as 2015, the fair managed to stage large collaborative presentations, such as the exhibition My East is Your West, which featured works by the Pakistani artist Rashid Rana and Mumbai-based Shilpa Gupta. The show travelled to the Venice Biennale later that year and IAF’s director was, at the time, reportedly in talks with the Pakistan High Commission in Delhi to arrange an artist exchange programme. “Things definitely got worse a few years back, though it’s never been a smooth process,” Jagpal says. “Even when I oversaw the successful visa applications for the British-Pakistani artists: Lubna Chowdhary and Idris Khan, in both instances they were intensely questioned about their parents’ ancestry.”

The irony, Jagpal says, is that India owes Pakistan a great deal for establishing a global interest in South Asian contemporary art. This is, she explains, because Pakistan’s less developed gallery system caused its artists to seek out international representation, therefore spreading their work to a collector base beyond the subcontinent.

The presence of Pakistani artist and collectors at the fair would benefit not just soft power relations but business too. One dealer that can attest to this is Renu Modi, who founded Gallery Espace in Delhi in 1989. During the 1990s and 2000s, the gallery became known as a key place in India to view art from Pakistan.

Modi recalls staging a solo show by the Pakistani miniaturist Talha Rathore in 1998—a show Modi says she priced too modestly, underestimating how warmly Rathore’s work would be received by an Indian audience. She only realised this after the show sold out “in hours” she says. Subsquent exhibitions by Gallery Espace of Pakistani artists, including an exhibition of Ali Kazim in 2008 and a presentation of Safdar Qureshi at IAF 2015, have also been some of its strongest performing shows.

But these days, Modi is less tempted to host artists from across the border due to increased logistical difficulties and growing political unrest. “I wouldn’t do it again, not for a while. I attempted a group show of Pakistani artists in 2016 but was advised to cancel it.” She points to other recent examples of such instances, including another group exhibition of Pakistani artists organised by the curator Pooja Sood that was also pulled for similar reasons.

Tensions between the two countries can also explain why at this year’s Kochi-Muziris Biennale, India’s most prestigious art exhibition that will open in December, no artists from Pakistan will show. In previous years, at least one artist from Pakistan, such as Bani Abidi or Rashid Rana, has appeared in the line up.

Shwetal Patel, a founding member of the Kochi Biennale, says that while the lack of Pakistanis in this year’s line up is not intentional, getting them to Kochi is “more trouble than it’s worth”. The southern city’s status as a strategic port and naval base means that Indian authorities are especially strict about granting visas to visit there; visitors from Pakistan are often required to conduct daily checks at a local police station. “There’s an increasing hardness going on around the national rhetoric of both countries, and a bluntness around the way of doing things. I’m not sure I see this changing soon,” he says.

It is not just the partition of 1947 that continues to bear ramifications for the South Asian art world. The splitting of East and West Pakistan to form Bangladesh in 1971 also causes issues for exhibitions such as the Dhaka Art Summit. Its artistic director Diana Campbell says that since 2014, getting artists from Pakistan to Bangladesh has become an increasing “logistical nightmare”. Campbell points to an incident during the 2018 summit when a Pakistani artist—who she declines to name—was denied a visa until well after the exhibition opened, meaning his wife, who was a Canadian citizen, had to transport and stage his installation by herself.

The difficulty in putting on crossborder shows—especially ones making explicit reference to charged subjects like nationality and religion—means that often the most ambitious and well executed ones take place in more neutral territory, such as Western Europe and the US.

A 2019 group exhibition, Homelands at Kettle’s Yard in Cambridge, UK, brought together works by a number of artists from India, Pakistan and Bangladesh to speak directly about national borders, including Kashmir’s. “A show of this nature, at this production level, is unlikely to be staged in the subcontinent, which is a shame but also a reality,” the exhibition’s curator Devika Singh told The Art Newspaper prior to its opening.

Do it through Dubai

And if contemporary art exhibitions tend to look abroad for Indo-Pakistani exchange, this is especially true for the commercial art trade. In the past two decades, Dubai has emerged as the number one trading route for goods—including art and antiques—to travel between the two countries.

It is estimated that $5bn worth of goods travel between Pakistan and India via third countries such as the UAE and Singapore. It is believed that Dubai alone accounts for two-thirds of this trade. And while art, antiques and collectibles (though not jewellery) imported into Dubai from both countries are subject to a 5% import tax, this pales in comparison to the hefty charges initiated at the Indo-Pakistani border since 2019, when the countries cancelled a bilateral “favoured nation” status that had, since 2011, halved tariffs and import quotas.

Zahra Khan, a leading Pakistani curator who helps run her family’s gallery Satrang in Islamabad, says that she has previously sent work to India via Dubai, which is just one of the ways that dealers in the subcontinent manouevre around the border. Another Pakistani gallerist, who wishes to remain anonymous, admits to regularly sending works through Dubai as a convenient way to ship art to Indian collectors, sometimes even placing smaller paintings and objects in hand luggage.

The UAE’s role as a conduit for Indo-Pakistani exchange is perhaps best exemplified by Art Dubai, which has developed a niche for gallerists from both countries to stage cross-border group presentations. The fair’s artistic director Pablo del Val says that the fair hosts many Indian galleries whose programmes include Pakistani artists. He adds that “many commercially successful artists with Pakistani heritage now live outside Pakistan, in Europe or in the Middle East. This can help to simplify the transportation of artworks in and out of Pakistan or India, and is logistically more straightforward than shipping from Pakistan to India directly, or vice versa.”

The UAE will soon be the site of an exhibition that brings together around 50 artists from the subcontinent. Pop South Asia: Artistic Explorations in the Popular will open in September at the Sharjah Art Foundation and will be the first major show of Pop Art from South Asia and its disapora. But importantly, the exhibition will not just stay in the UAE—it will in February travel to the private Kiran Nadar Museum of Modern Art (KNMA) in Delhi, founded by the eponymous collector and patron.

Its curator, the artist Iftikhar Dadi admits that while the international situation might not be favourable to staging such a show in India, he believes its subversive content will help it fly under the radar of government officials. Nadar’s position as one of the richest and most powerful collectors in the region should help too. Few things traverse a contested border as smoothly as wealth—and where there is enough will, there’s usually a way.

Art Industry News: Hunter Biden May be Forced to Disclose the Buyers of His Pricey Art + Other Stories

A Set of Pope Francis’s Old Papal Clothes, Signed ‘Francesco’ With a Black Marker, Are Going Up for Auction