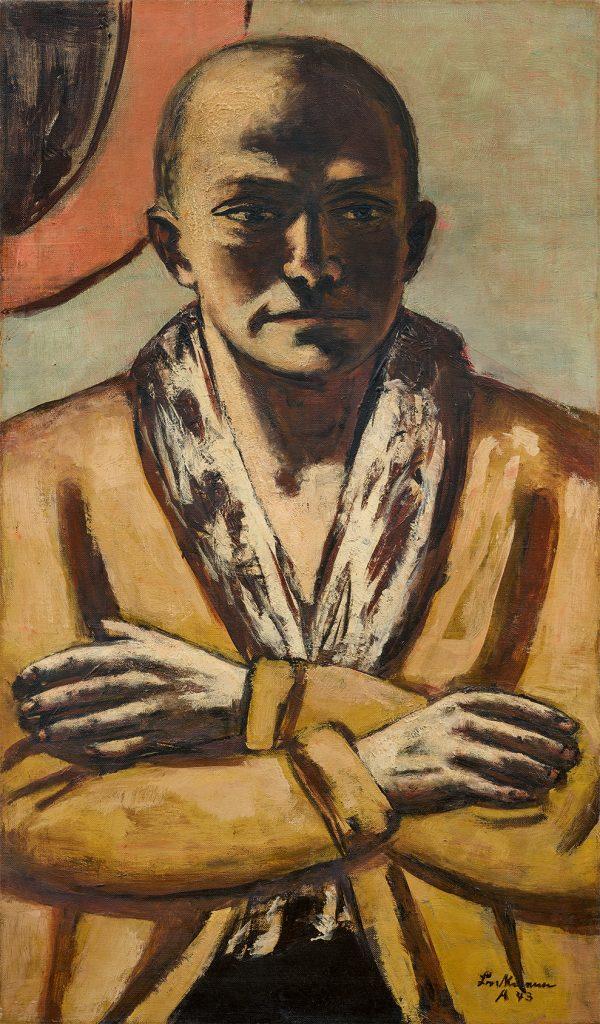 A self-portrait by Max Beckmann is set to be the runaway success at leading Berlin auction house Grisebach’s sale on December 1, with a whopping estimate of €20 million to €30 million ($20 million to $30 million).

This hefty figure is the highest estimate ever given for an artwork on Germany’s secondary market, which is much smaller than those in the U.S., U.K., and China.

It is also the highest estimate ever given for Beckmann worldwide, far surpassing any of his recent showings at auction.

Painted in 1943, Selbstbildnis gelb-rosa (Self-Portrait Yellow-Pink) is a handsome depiction of the artist that lacks the grim intensity of many of his other self-portraits. With his arms flatly crossed and his gaze reaching past the viewer, he appears almost to be in a meditative state.

The work was painted by Beckmann while he was exiled in Holland and given to his wife, Quappi. It has remained in private hands ever since but some hint of how it may fare at auction can be gleaned from the sales of the artist’s other self-portraits, which are among his highest valued works.

In 2001, Selbstbildnis mit Trompete (Self-Portrait With Trumpet) (1938) sold for $22.5 million at Sotheby’s New York, more than doubling its high estimate. This was a triumph compared to the $16.8 million fetched for Selbstbildnis mit Glaskugel (Self-Portrait With Glass Jar) (1936) in 2005, also at Sotheby’s, which only just surpassed its high estimate of $15 million thanks to buyer’s premium.

Portraits by Beckmann of other sitters have in recent years gone for several million dollars, roughly corresponding with expectations. In October 2021, Portrait of a Turk (1926) sold for $2.7 million at Sotheby’s New York, squarely hitting the middle range of its $2 million to $3 million estimate.

These sizable sums reflect Beckmann’s position as one of the most prominent artists of the early 20th century, associated with both the movements of German Expressionism and New Objectivity. Other self-portraits of his are held in world-class collections like those of MoMA, the Albertina in Vienna, and the Art Institute in Chicago.

Nonetheless, the lot should raise eyebrows. Works going up for auction in Germany are typically sold through independent regional houses and rarely attract bids over $1 million.

The country’s secondary market has, however, been growing in recent years, a surprising trend when set against the downturn experienced after the pandemic by markets elsewhere. This boost may be attributable to Brexit making Europe a much more convenient option for both buyers and sellers as well as Germany’s growing class of young, global collectors.

Grisebach’s summer sales included a handful of seven-figure price tags, among them Russisches Ballet (1909) by fellow German expressionist Max Pechstein, which sold for €2.4 million ($2.6 million), and Beckmann’s Grauer Strand, which was snapped up for €1.8 million ($1.9 million).

The record for highest winning bid ever at auction in Germany was already set by Beckmann at Grisebach in 2018 at €5.5 million ($6.5 million) for Weiblicher Kopf in Blau und Grau (Die Ägypterin), establishing the artist as the country’s secondary market superstar. Is history about to repeat itself?

The work will be shown in New York from November 5 to 10 ahead of the sale in Berlin.

Two Stolen Ancient Greek Statues that Were on View at the Met, Come Back From U.S. to Libya