Home News Paris+ Opening Is Hailed as a ‘Renaissance’ for the City’s Art Market—But... 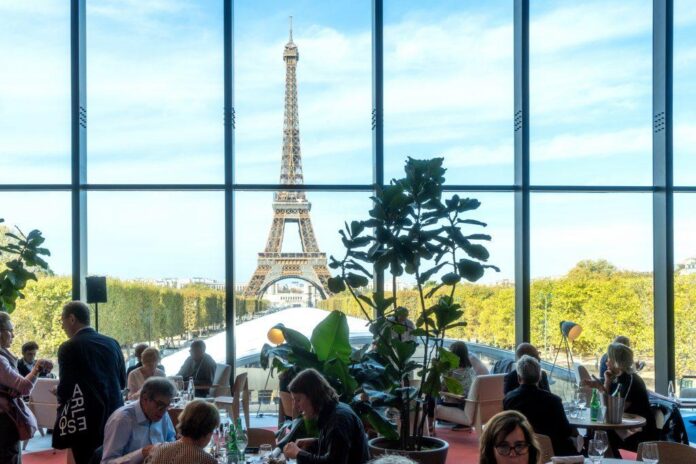 “Renaissance” was a common buzzword on the lips of the international art set in the French capital this week, for the debut of Paris+ by Art Basel. The term was being applied to the revival of Paris’s art market status, with the arrival of a major international competitor on the art fair circuit. Inside the Grand Palais Ephèmére—a temporary structure on the Champ de Mars, to be used by Paris+ until 2025, while the main Beaux-Arts masterpiece undergoes reconstruction—champagne was flowing and deals were being struck.

But outside, and certainly among the proponents of the ousted homegrown fair FIAC, which previously took the current spot on the calendar—there were references to another period of French history. “Revolution” was in the air, especially as protests shut down the city’s boulevards, labor strikes cancelled trains, and a fuel crisis caused chaos at gas stations.

There were even a few complaints from some exhibitors at Paris+ about the size of the booths—the temporary venue is smaller than the real Grand Palais. But there was plenty of good retail real estate to go around for blue-chip dealers. Hauser and Wirth, for example, had prime positioning right by the entrance, where Princess Eugenie (a gallery employee) was holding court with collectors.

In another departure from art fair normalcy, the luxury fashion label (and cultural patron) Louis Vuitton had its own booth nearby, serving as a teaser for more fashion collaborations to come within the “plus” of the Paris+ brand.

The VIP opening was a busy day right out of the gate, as a wide net of collectors, museum groups, and curators drawn in by the Art Basel brand arrived from 10 a.m. Curators Hans Ulrich Obrist and Beatrix Ruf were spotted, as were Asian collectors such as Hong Kong-based Alan Lo and Taiwan-based Rudy Tseng, and Europeans Patrizia and Eugenio Sandretto Re Rebaudengo. 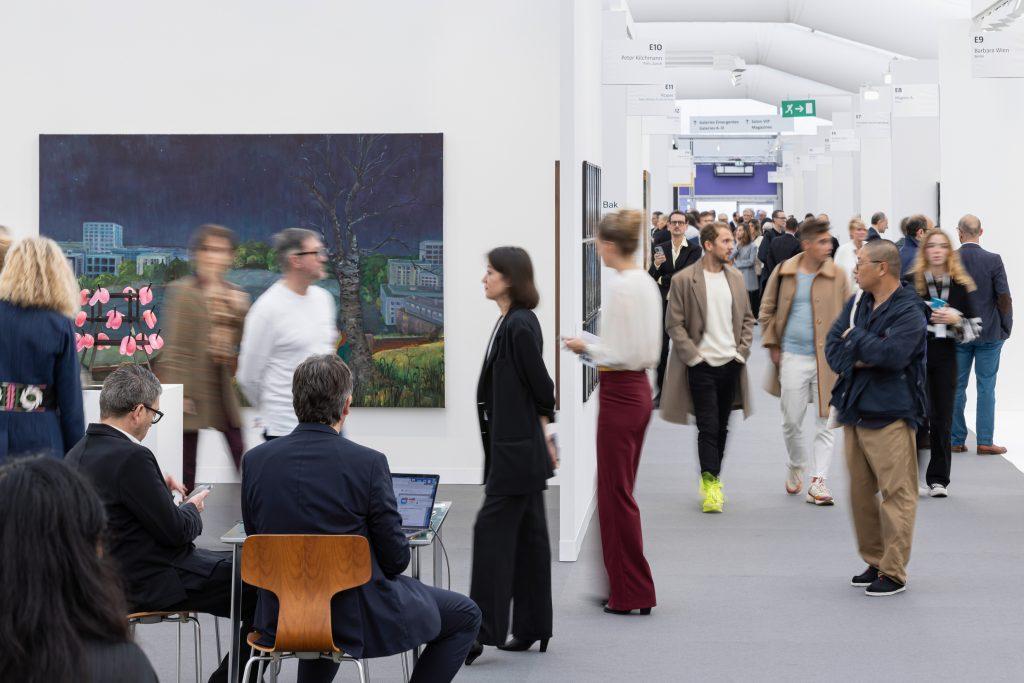 The stampede among the aisles was so great that by mid-day, the carpet on Gagosian’s stand was looking a little threadbare, and lines for the champagne lounge and its vista of the Eiffel Tower began to grow a little too long to bear waiting.

Lots of people were crammed into the fair, but unlike at Frieze London a week prior, the consensus was that the calibre of attendees remained high. “If I had to sum it up in one formula, I would say in London it was socialites, younger people spending more time in the aisles than in the booth,” Belgian collector Alain Servais told Artnet News. “Here I would say we have the left-wing Parisian intelligentsia, who maybe have less deep pockets, but who know a lot about art, which means the booths are extremely busy and the aisles less so.”

For Paris powerhouse gallerist Kamel Mennour, the more international audience was welcome, and he was grinning from ear to ear when we met. He particularly happy about the uptick in attendance by Americans, who might be more inclined to spend given the favorable exchange rate for the dollar. “We love Americans,” Mennour said, adding: “Write that down!”

The quality of the material on view aimed equally high, and lots of dealers had organized their booths to coincide with museum shows around the capital. Drawing eyes into David Zwirner’s busy booth was work by Alice Neel and Joan Mitchell, who are the subjects of major exhibitions at the Centre Pompidou and Fondation Louis Vuitton, respectively.

Zwirner, who told Artnet News last week that “no one will remember FIAC” after Paris+, was quick to report $11 million in sales, adding that those were “certainly numbers that we weren’t able to achieve here in Paris in the past.” The Mitchell on his stand sold for $4.5 million alone to a private collection, and the gallery also placed a $3 million Robert Ryman work from a curated presentation on the booth. (Pace Gallery’s early sales also included a Robert Ryman, this one a $900,000 oil on panel from 1970.) 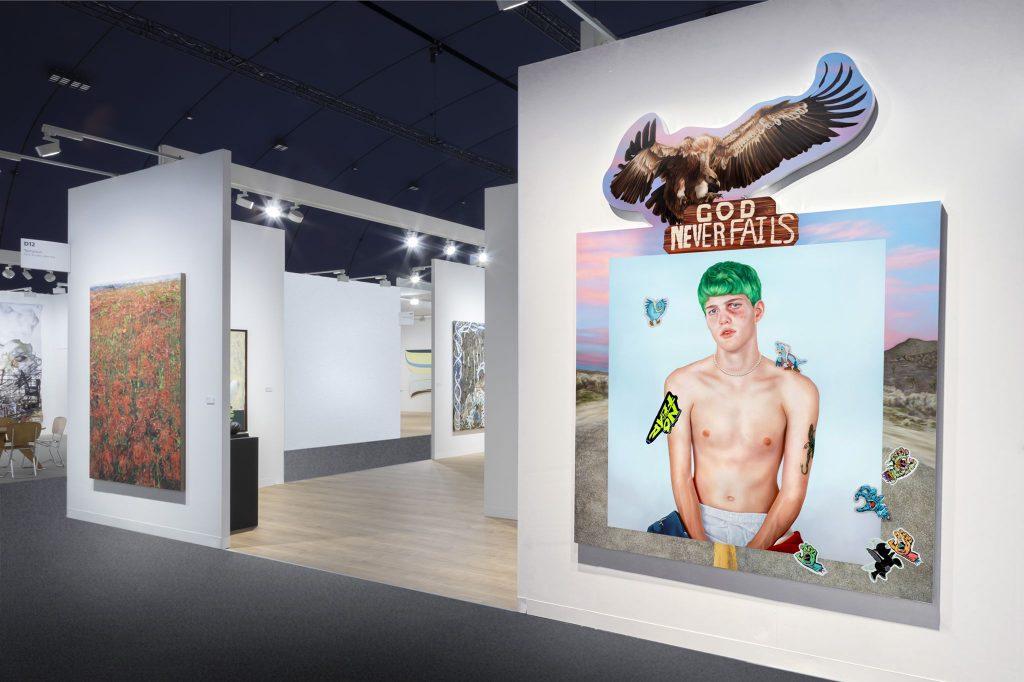 Galerie Templon was showing works by Kehinde Wiley, who also has three monumental pieces on view in the nave of the Musée d’Orsay. The gallery sold a large painting by the artist for $880,000 by the end of the day as well as a $275,000 sculpture, as well as work by Gérard Garouste, who is enjoying a retrospective at the Centre Pompidou, for €95,000. They also sold several works between €140,000 and €200,000 by Michael Ray Charles, who is included in the Quai Branly exhibition “Black Indian.”

“We have never seen such excitement,” gallery director Anne-Claudie Coric told Artnet News, adding that the new fair’s novelty has been a big draw, though she stressed  Paris’s enduring power as an art hub. “We’re not a tiny city, we’ve always been an arts capital—the rest of the world just didn’t pay attention enough!”

Indeed, it seemed that those at the fair were in a buying mood. “We’ve bought!” the happy London-based collector Paul Ettlinger told Artnet News before the fair opened, adding that he was now the proud owner of a wooden Paul McCarthy sculpture from Hauser and Wirth. The gallery swiftly swapped the sold work out on the booth for another wooden Paul McCarthy sculpture, which sold for $575,000 before the day’s end.

Hauser and Wirth, which has announced plans that it is opening its own Parisian outpost next year in a 19th-century manor house in the eighth arrondissement, also sold works by George Condo ($2.65 million), Rashid Johnson ($1 million), and Avery Singer ($800,0000.) Elsewhere, White Cube sold two new paintings by Tracey Emin for £750,000 and £650,000, among others.

There were many comments that the fair felt just like Art Basel, the veteran parent event in Switzerland. If a difference were to be felt, it would be in the pace of sales at the top end of the market (slow). The booth of the powerhouse gallery consortium LGDR was heaving, with particular buzz around a beautifully hung Alexander Calder mobile, Black Disc with Flags. And although Amalia Dayan reported “solid interest” from collectors during the opening, there was no movement on the work by the end of the first day. Completed sales for the gallery did include a Günther Uecker work for $850,000 and a Jenna Gribbon painting for $100,000.

Another key difference was a more exciting selection of younger galleries, perhaps helped by Paris+’s onboarding of Celement Delepine, who used to run FIAC’s edgier sister fair, Paris Internationale. The Rubells were shopping in the emerging galleries section, where 16 exhibitors had solo presentations.

Artnet News caught up with them at seventeen gallery, inspecting works by artist Patrick Goddard, a 20-minute surreal comic film satirizing racist linguistic tropes, Whoopsie’s Dream (priced at €17,000). The piece was set within an installation thematically linked to the film, resembling model train dioramas (complete with with moving trains and overrun by snails) that conjured up nostalgic visions of 1960s England (priced at €10,000). “It’s the most intriguing thing we’ve seen so far,” said Don, before swiftly buying the entire booth.

Collector and gallerist Arthur Villepin, visiting from Hong Kong, was impressed with the turnout and the fact that Art Basel has been able to “create this moment in a market that is tough.” We caught up by Marianne Ibrahim’s stand, which was thronging, and he pointed out work by Yukimasa Ida, who he had recently added to his collection. By the day’s end, Ibrahim had also sold out her booth, including a Raphael Barontini work priced at €60,000, a €375,000 Amoako Boafo, and Peter Uka’s Skate (2022) for $95,000.

Despite smiles all around and comparisons to Art Basel, sales reported on the first day didn’t totally support the comparison. Though Zwirner’s $4.5 million high certainly beat out the top reported first-day sale at FIAC last year, it did not touch his $6 million high achieved last week at Frieze London, nor come close to the $12.5 million reported for a Felix Gonzalez-Torres work at Art Basel in June. Nor did Hauser and Wirth’s $2.65 Condo sale meet the $4.8 million Guston it reported at Frieze (or the $40 million Bourgeois it placed in Basel). At Thaddaeus Ropac gallery, conversations around the higher-value works on the booth were still ongoing by the end of day one.

A sceptic might read some signs of wider economic turmoil entering the art fair walls. Art advisor Mattia Pozzoni warned that the market might be feeling more pain after the November sales in New York, and New York-based advisor Nazy Nahand said she was already experiencing some concerns among her clients, who had begun to hesitate before making big purchases.

But slower sales especially at the top end have always been a theme in Paris, with some collectors pointing out just how gauche it is to buy work on the stand without talking about it at length first. Collectors generally took their time at FIAC in the past, and some fair attendees pointed out that simply changing a fair’s name won’t change the approach of a city’s collector-base overnight.

For market veteran Simon de Pury, the fair was a good trial run, which demonstrated a promising start for Art Basel in Paris. “Clearly this is going to become the fair which could eventually be of the same level, or similar level, to Art Basel in Basel, and so in a way it’s great to have Art Basel in the first half of the year and Art Basel Paris in the second half of the year,” he said. “And when they return to the Grand Palais, I think it is going to be even better because of the setting, which will be even more spectacular.”