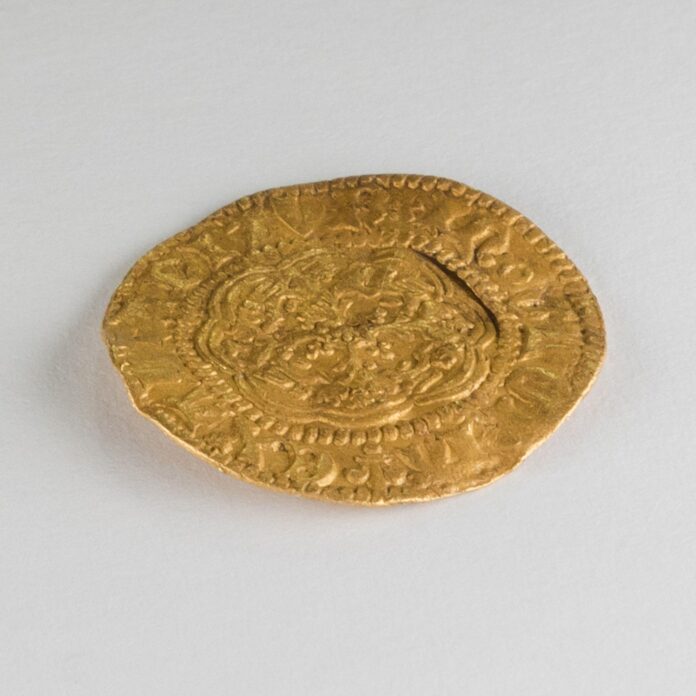 The discovery of a rare gold coin on the south coast of Newfoundland, Canada, challenges traditional historical narratives about the timing of European contact in the region, predating John Cabot’s arrival on the island by 70 years.

In a press release this week, the Government of Newfoundland and Labrador said that the coin was found during the summer of 2022 by Edward Hynes, a local amateur historian, who reported it to the provincial government as required under Canada’s Historic Resources Act. The 600-year-old coin predates the first documented European contact with North America since the Vikings, in a region with a 9,000-year-old history of human settlement and rich Indigenous traditions.

After consultation with Paul Berry, a former curator of the Bank of Canada’s Currency Museum, the coin was identified as a Henry VI quarter noble, minted in London between 1422 and 1427. In the 1400s, the coin would have represented a significant sum of money, valued at 1 shilling 8 pence, or around C$81 ($60) today.

Prior to this discovery, a coin minted in 1490 and found in 2021 at the province’s Cupids Cove Plantation Provincial Historic Site was considered the oldest English coin ever found in Canada. As Berry says that the coin was likely out of circulation when it was lost, there is much speculation about exactly how the gold quarter noble coin made its way to Newfoundland and Labrador.

The exact location of the discovery is being kept secret to discourage treasure hunters.

In an interview with the CBC, provincial archaeologist Jamie Brake—who says that after ongoing study is complete the coin will likely be put on public display at The Rooms museum in the provincial capital of St. John’s—commented on the significance of the find. “Between England and here, people over there were not yet aware of Newfoundland or North America at the time that this was minted,” he said.

The discovery of the coin underscores the intriguing archaeological record in Newfoundland and Labrador, Canada’s easternmost province. Stories of Viking arrival are contained in Icelandic sagas from 1001, citing visits by Leif Erikson, and archaeological evidence of a Norse settlement was found in L’Anse aux Meadows, Newfoundland, which was declared a Unesco World Heritage site in 1978.

Other unconfirmed accounts of European contact include tales from the Channel Islands about a ship being blown off course in the late 15th century into a strange land full of fish, historical Portuguese maps depicting Terra do Bacalhau (or, the land of codfish), as well as the Voyage of Saint Brendan, a mythical account of an early 6th Century sea voyage by an Irish monk.

In 1583, Newfoundland became England’s first possession in North America and the establishment of fishing operations on the outer coastline of the island cut off access to traditional food sources for the indigenous population.

“There’s been some knowledge of a pre-16th century European presence here for a while, you know, excluding Norse and so on,” Brake said. “The possibility of perhaps a pre-16th century occupation would be pretty amazing and highly significant in this part of the world.”