Home News From a Magritte Murder Mystery to an Edward Hopper Automat, Here Are... 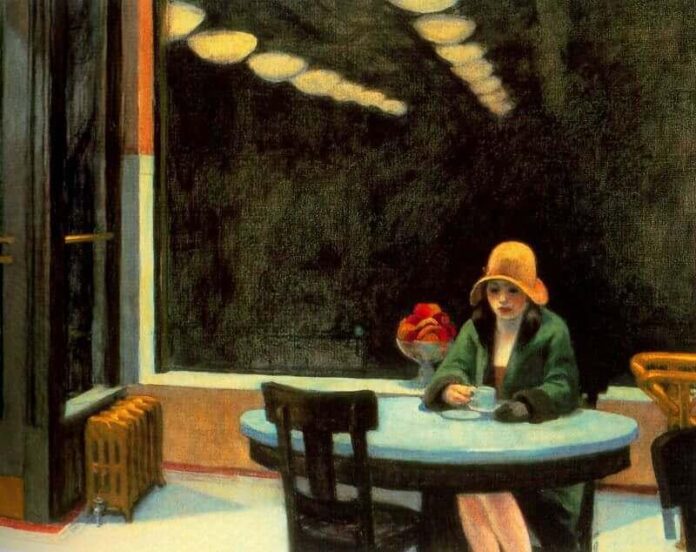 January 1: day of hangovers, gym subscription sign-ups, and a fresh batch of artworks being freed from the nearly century-long grip of copyright law.

In the U.S., New Year’s Day is also Public Domain Day, when intellectual property rights to artworks created 95 years ago lapse, and those creations can be re-used without permission, license, or fee. As of Sunday, any piece made in the year 1927 now belongs to the public domain.

A number of iconic artworks fall into this category, such as Edward Hopper’s Automat (1927), a sober nighttime portrait of a well-dressed woman sipping coffee in the eponymous restaurant; and Georgia O’Keeffe’s poetic Black Abstraction (1927), which looks as if the moon is balanced in the crook of someone’s knee.

1927 was also the year of numerous René Magritte contributions, including his theatrical masterpiece The Menaced Assassin (1927), which finds a paid killer pausing after offing a nude woman, with two derby-hatted detectives poised on the other side of a door ready to take him. The Belgian artist also churned out The Meaning of Night and Le Jouer Secret that same year.

Other surrealists were busy as well. A then-23-year-old Salvador Dalí had just returned from nine months of military duty when he finished Apparatus and Hand (1927), a dreamy abstraction in which a human hand that appears to have been turned inside out tops a pair of geometric blocks. Yves Tanguy, meanwhile, put the finishing touches on Mama, Papa is Wounded! (1927).

The list goes on: Pablo Picasso painted The Painter and Model (1927), Max Beckmann completed Self-Portrait in Tuxedo (1927), Joan Miró added Blue Star (1927) to his oeuvre, and Wassily Kandinsky sought a sense of tactility and musicality in Hard in Soft (1927).

More than just paintings, notable photographs found life 95 years ago too. Charles Sheeler took what is perhaps his best-known photograph, Criss-Crossed Conveyors, River Rouge Plant, Ford Motor Company (1927), while Ansel Adams published the first proper portfolio of his prints, a collection that included Monolith, the Face of Half Dome (1927) and A Grove of Tamarack Pine (1927).

While these and other artworks enter the public domain in the U.S. for the first time this year, most have already been free from restriction in other countries, where the reach of copyright law isn’t quite as extensive. In most of Europe, for instance, any work created by an artist who died more than 70 years ago is in the public domain. Much of Africa and Asia follow the same formula, but the limit is just 50 years.

Here Are 6 of the Most Daring Design Shows to See This Month (Think Chainsawed Furniture, Hamburger Vases, and Giant Crystals)