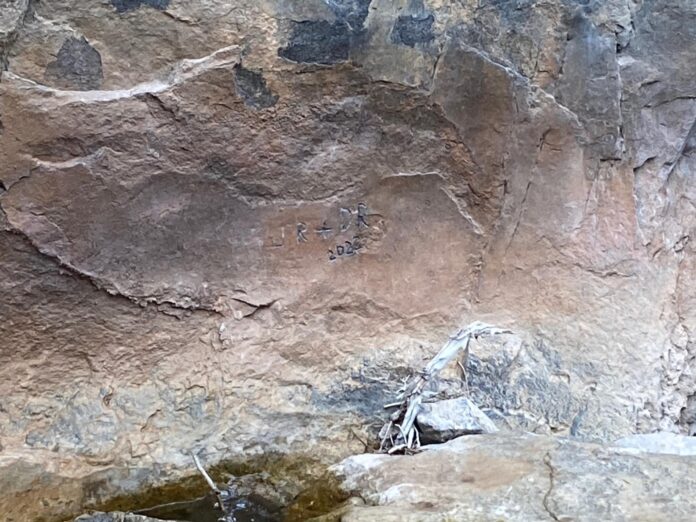 An ancient pictograph panel in the Helena-Lewis and Clark National Forest in Montana known as the Hellgate Pictographs was vandalised this summer, according to officials calling for information related to the crime.

The initials and date “JR + DR 2022” were carved above the waterline onto a limestone wall sometime after June. Although the incision was made outside of the main panel in the site, it is within a larger pigment wash that had not been previously recorded by archaeologists.

The site is considered sacred to the Blackfeet and the Confederated Salish and Kootenai tribes. It contains more than 280 motifs made from organic materials mixed with hematite, iron oxide or charcoal that depict human and anthropomorphic figures, hand prints, finger lines, abstract and geometric shapes, and other supernatural elements like shamanic figures and “souls in flight”.

Archaeologists attribute much of the rock art to the Foothills abstract tradition, which has been found throughout the northwestern US and southwestern Canada and predate 1700 CE. Radiocarbon dating from four of the Hellgate sites in the forest dates the panel from 650 CE to 1300 CE, but it is possible that some of the art is much older.

“The tribes have expressed that they don’t want too much attention drawn to the site,” Chiara Cipriano, the public affairs officer to the Helena-Lewis and Clark National Forest Service, tells The Art Newspaper. “There’s no interpretive signs or kiosks so you would have to know what you were looking for.”

The pictographs are nominated for listing in the US National Register of Historic Places for their cultural significance and ancestral ties to Indigenous tribes. Natural deteriorationa and increased visitation to the site has led to the damage of several areas; degradation caused by the recent carving is likely irreparable.

There have been no leads in the investigation so far, which was recently publicised online. According to US law, a person who excavates, removes, damages or otherwise defaces archaeological resources on public land could be fined up to $10,000, imprisoned for a maximum of five years or both.

The British Museum Declined to Show Ultra-Precise Digital Replicas of the Parthenon Marbles. So Another London Institution Stepped in