Home News No oil, no gas—no stopping: Climate activists in Italy glue themselves to... 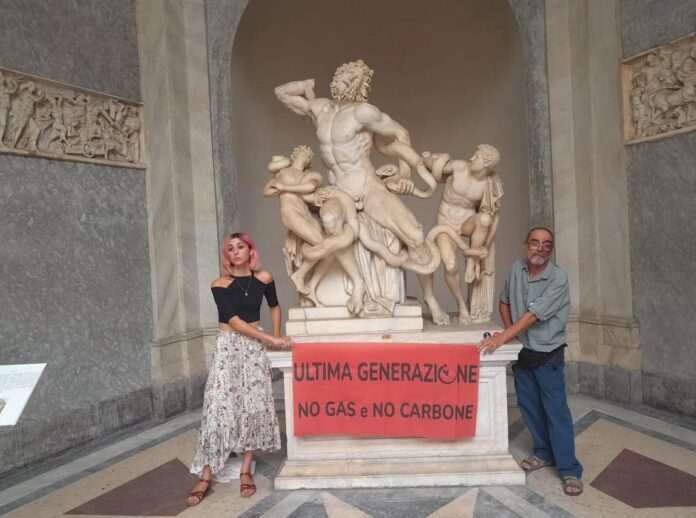 Climate activists in Italy have hit the headlines again. In a protest on 18 August, demonstrators from the Ultima Generazione group glued themselves to a plinth at the Vatican Museums in Rome bearing one of its most famous sculptures Laocoön and his Sons, which is thought to have been created around 40BC. The protestors say the work was not damaged.

“Just like [the priest] Laocoonte in ancient times, scientists and activists are warning their communities about the catastrophic implications of not acting to mitigate the climate emergency. Like Laocoonte back in ancient Greece, scientists and activists are not being listened to, or worst, they are repeatedly silenced by governments,” says an online statement from Ultima Generazione. It is unclear if the activists have been taken into custody by Vatican criminal prosecutors.

Earlier this year protestors from the same group glued themselves to Sandro Botticelli’s Primavera (around 1480) at the Gallerie degli Uffizi in Florence and the sculpture Unique Forms of Continuity in Space (1913) by the leading Futurist artist Umberto Boccioni at the Museo del Novecento in Milan. A spokesperson at the Gallerie degli Uffizi says that the protesters glued themselves to the glass covering the Botticelli work, which took 20 minutes to clean following the glue incident.

The interventions in Italy follow a number of similar actions in the UK at major museums and galleries. In July, environmental activists from the group Just Stop Oil glued themselves to the celebrated Constable painting The Hay Wain (1821) at the National Gallery in London. Kelvingrove Art Gallery and Museum in Glasgow, Manchester Art Gallery and the Royal Academy of Arts in London were also targeted.

According to the Observer, both Ultima Generazione and Just Stop Oil are funded by the Climate Emergency Fund, a Los Angeles-based organisation created by three millionaires in 2019 to support environmental activism. The organisation had not responded to a request for comment at the time of writing.

The Vatican Museums website says “This statue group [the Laocoön] was found in 1506 on the Esquiline Hill in Rome and immediately identified as the Laocoön described by Pliny the Elder as a masterpiece of the sculptors of Rhodes.”