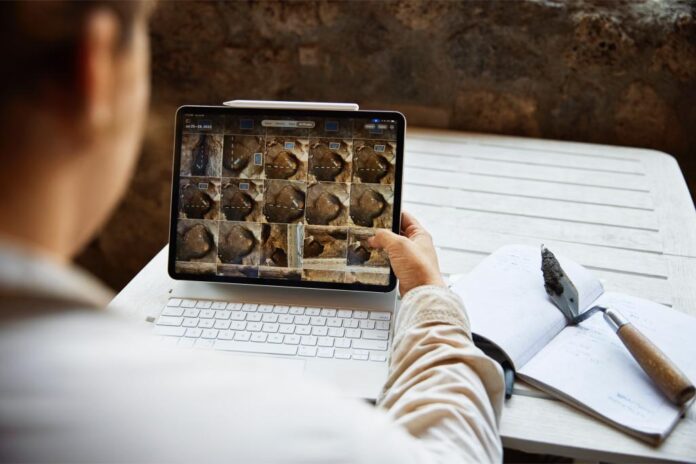 For excavations at Pompeii, the ancient Roman city famously frozen in time by the eruption of Mount Vesuvius in the year 79 C.E., archaeologists have an unexpected new tool to use alongside trowels, shovels, brushes, and sieves: the iPad Pro.

During the recent Tulane University Pompeii I.14 Project, which uncovered artifacts from an ancient Roman kitchen, archaeologists used the iPad to document, examine, and better understand what they’d found—and how such objects would have been used by their creators.

“iPad is the perfect archaeology machine,” Allison Emmerson, the dig’s head archaeologist and a professor at Tulane University, told the Apple Newsroom, the company’s site for news about the brand. She worked with digital archaeologist Alex Elvis Badillo to integrate the device into her practice, and develop new techniques for its use at a dig site.

“Archaeological excavation is a destructive process—once a location has been dug, that work can never be repeated—so our most essential concern is thorough recording of all relevant data so that future researchers can ‘reconstruct the site,’” she explained. “iPad Pro allows us to collect data faster, more accurately, and more securely than any other tool, and has the processing power we need to aggregate that information and present it in a way no one has before.” 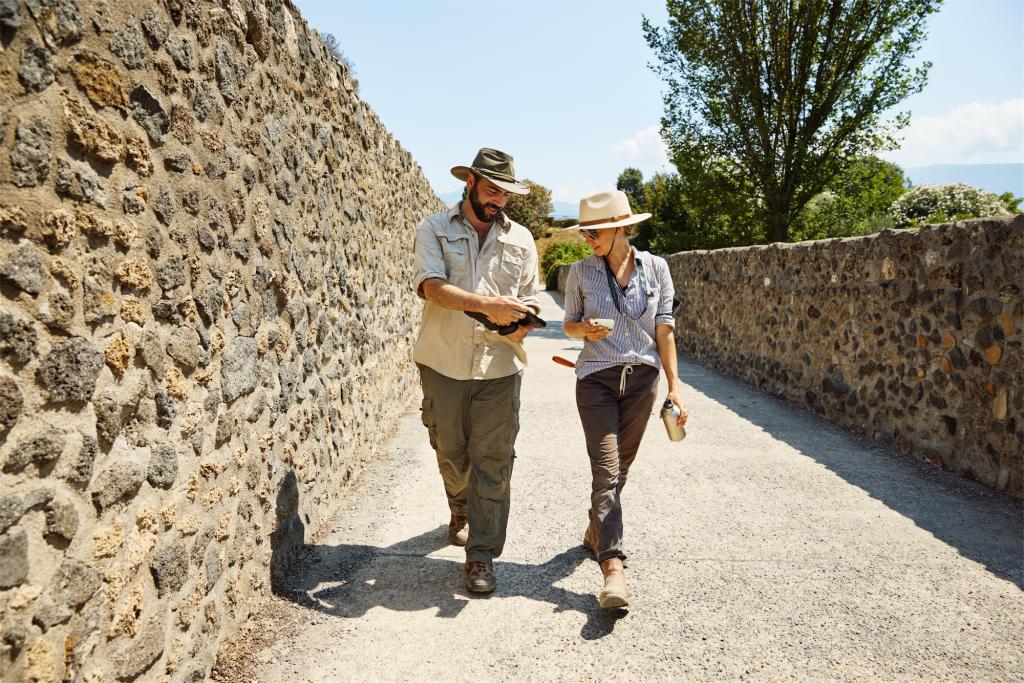 Allison Emmerson and Alex Elvis Badillo spent a year developing a fully digital workflow for excavations at Pompeii that would use the iPad Pro with Apple Pencil. Photo courtesy of Apple.

The iPad is even equipped with a LiDAR scanner—technology typically used on airplanes to help read topography covered with dense vegetation, and which has led to numerous groundbreaking finds in recent years. At a smaller site, it can created 3-D maps of trenches that creates an exact record of where each and every artifact was unearthed.

“The way I have always recorded on past digs was on paper with pencils or pens,” Jordan Rogers of Minnesota’s Carleton College, one of the excavation’s dig supervisors, said. “And when you drew something, you did it on graph paper, and used string and levels to measure where things were located. Photos were taken on separate cameras that you had to upload manually once you got back home. Everything was in a different place, and every night involved many hours transferring your day’s notes onto your computer.” 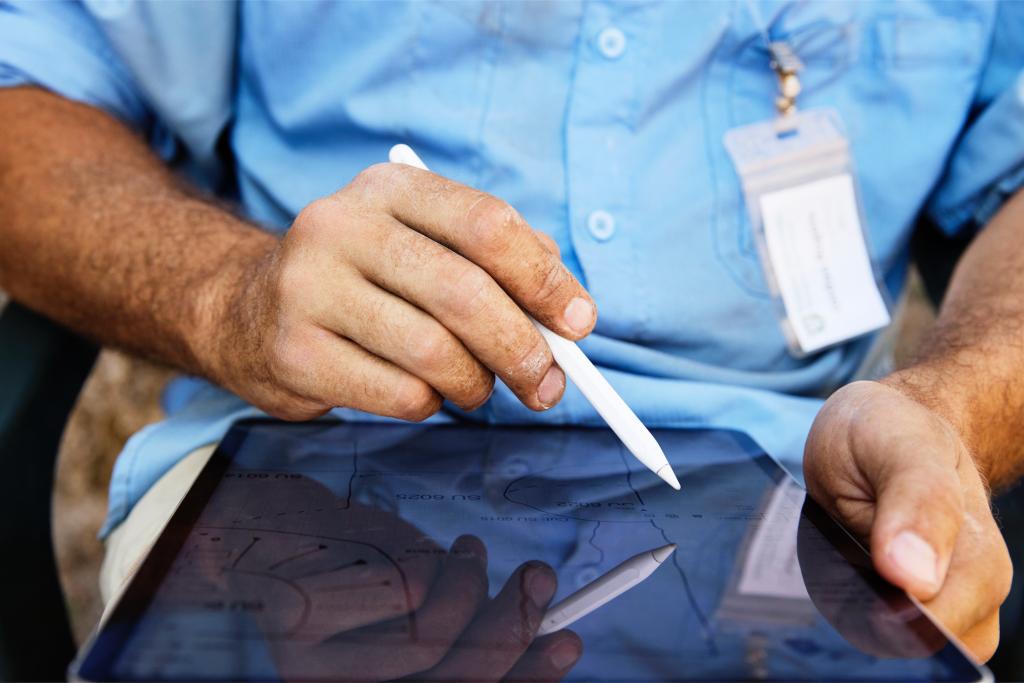 Excavation supervisor Jordan Rogers uses Concepts on iPad Pro with Apple Pencil to sketch out the areas of the room his team is excavating in Pompeii. Photo courtesy of Apple.

Now, all of this data can be stored automatically in readily accessible files that can be made available to other scholars and experts online. It’s a paperless workflow created on and accessed through a single device—and one that could allow archaeologists to share their findings, a process that has typically taken years, on a much-accelerated timeline.

The findings at Tulane’s Pompeii dig, which was conducted over five weeks this summer and will continue in 2023 and ’24, are already challenging archaeologists’ assumptions about the ancient city. 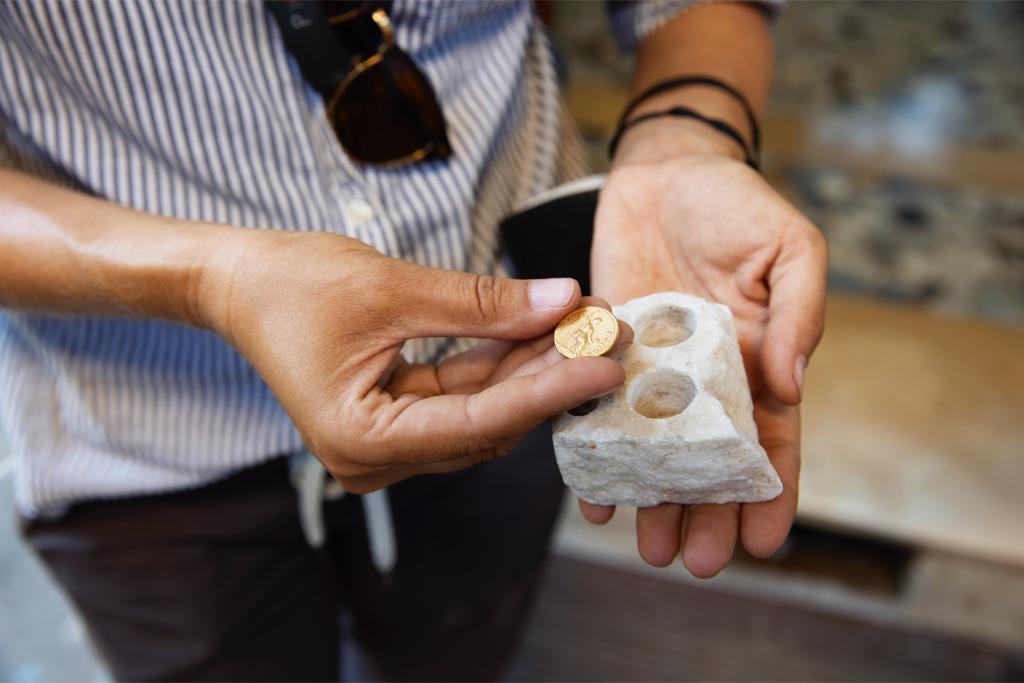 Previously, experts thought this particular kitchen dated to the second or third century B.C.E. Now, archaeologists are leaning toward a later date, from the first century C.E.—not long before the fateful volcanic eruption that put an end to Pompeii society. (One major clue was a rare gold coin called an aureus, commissioned by the Emperor Augustus in 13 or 14 C.E.)

And there was a school of thought that Pompeii was already in trouble ahead of the eruption that caused its destruction, having never recovered from an earthquake some 17 years beforehand.

That doesn’t match with what’s turned up at the dig, Emmerson said, such as “improvements to the dining areas of the restaurant that lead us to believe that Pompeii was not a city in decline at the time of the eruption—it was thriving.”

See more photos from the project below. 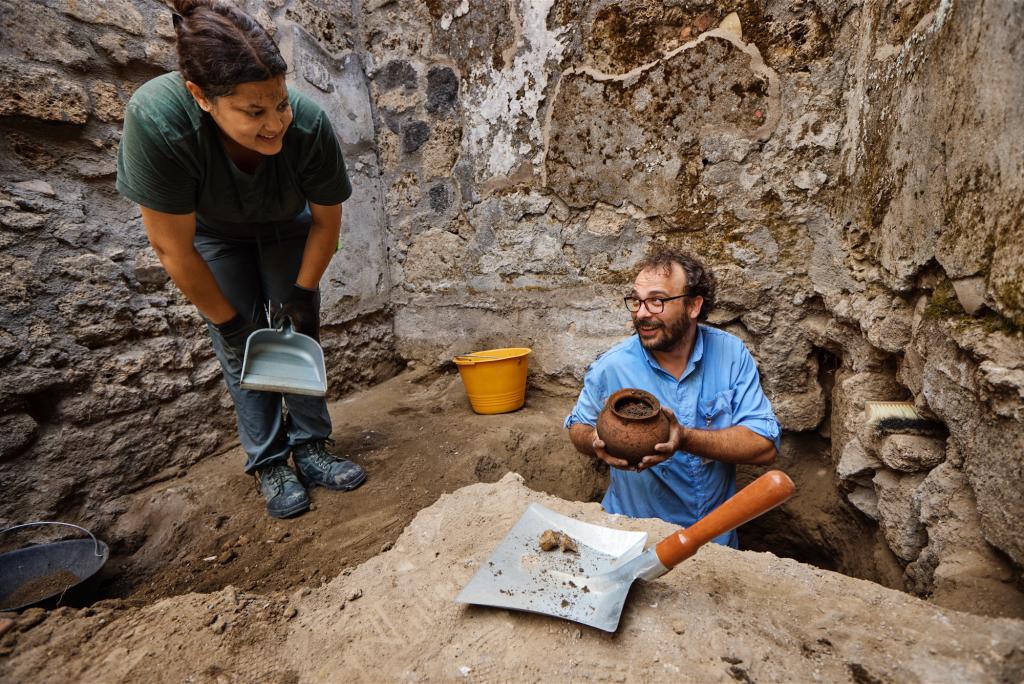 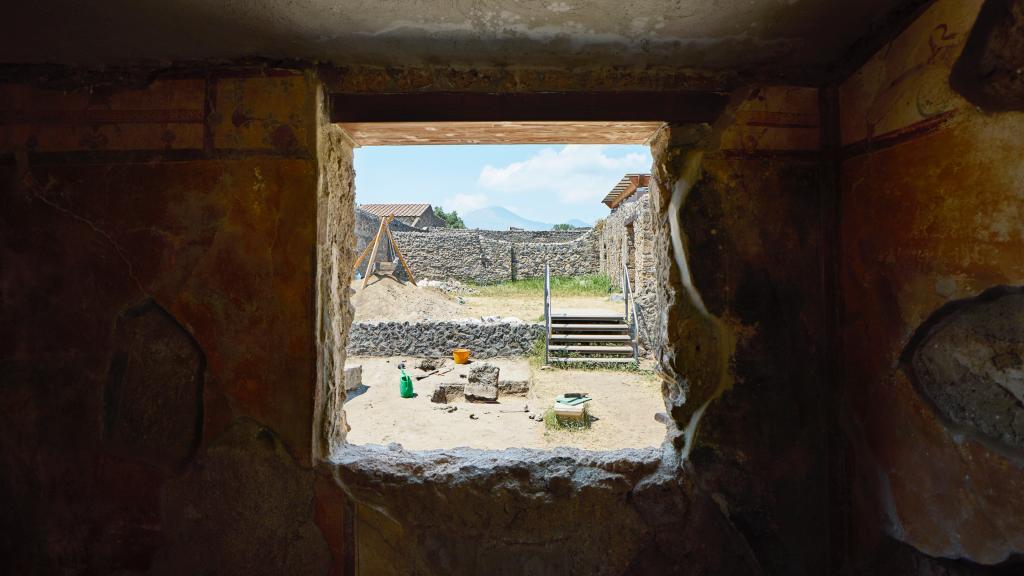 Mount Vesuvius is visible through a window on the site of this summer’s Tulane University Pompeii I.14 Project. Photo courtesy of Apple. 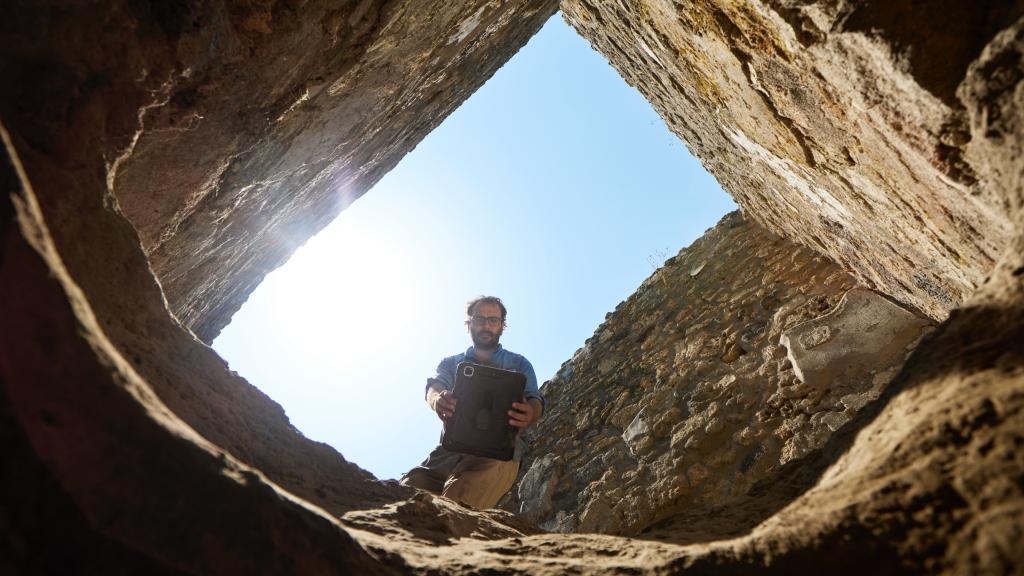 Jordan Rogers uses iPad Pro to conduct a 3-D scan of the pit his team is excavating in an ancient Roman kitchen in Pompeii. Photo courtesy of Apple. 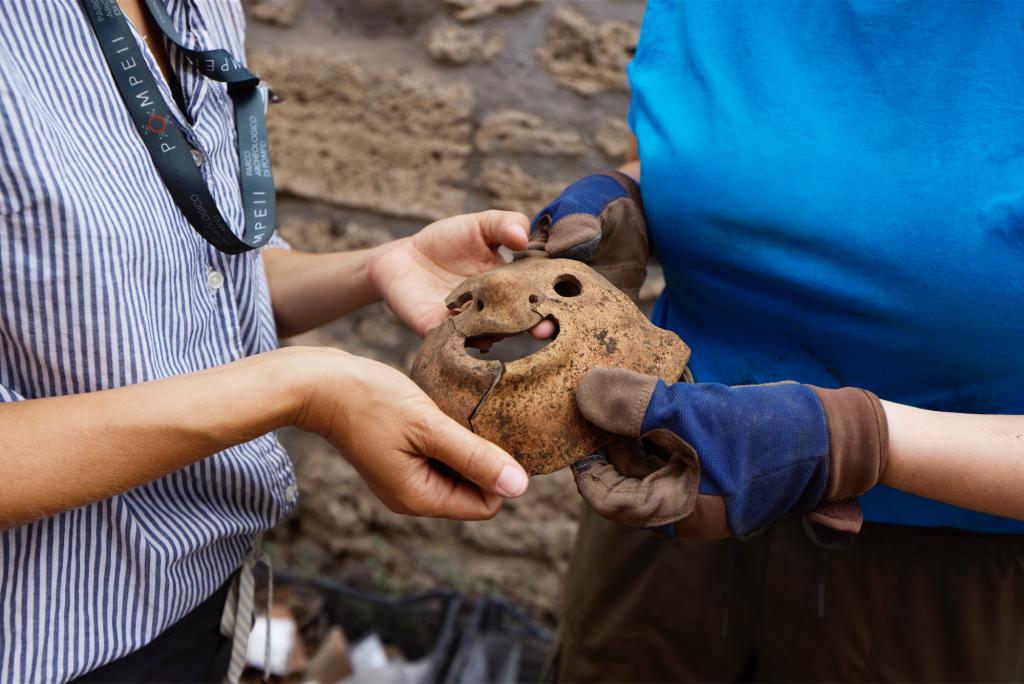 A mask the team found while excavating the kitchen pit. Photo courtesy of Apple. 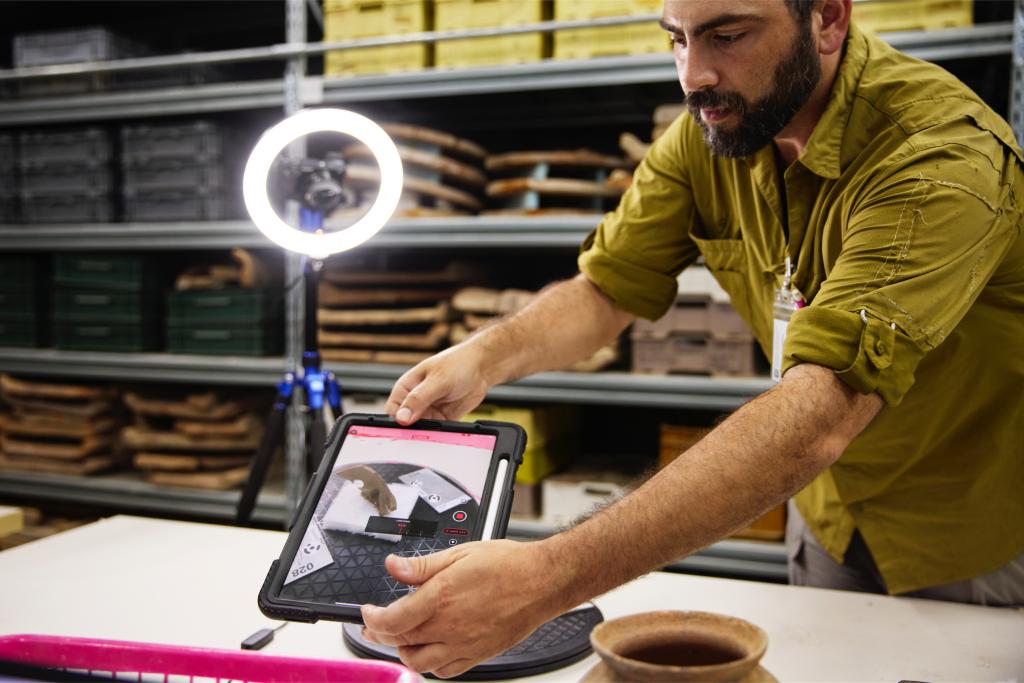 Alex Elvis Badillo uses iPad Pro to conduct a 3-D scan of a mask the team found while excavating the kitchen pit. Photo courtesy of Apple.

The Quiet Connoisseurs: Meet 5 Powerful Under-the-Radar Art Collectors in France, From a Rosé Magnate to a Young Fashion Mogul