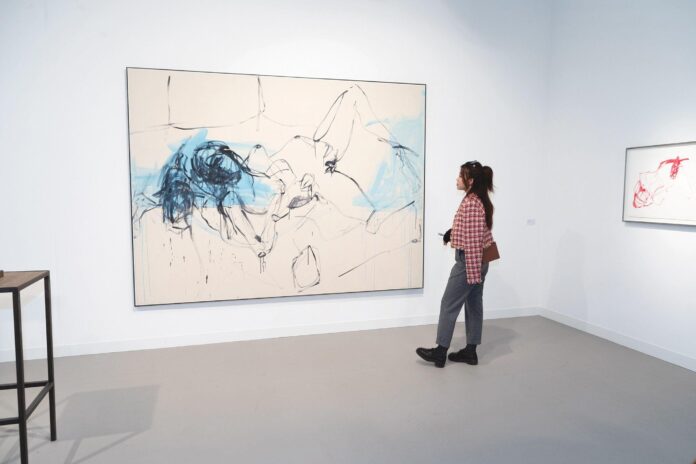 Strong sales for UK-based artists in the first two days of Frieze London and Frieze Masters are being attributed, at least in part, to a weakened pound sterling attracting collectors spending in comparatively strengthened dollars. Xavier Hufkens sold a painting by Tracey Emin “in the range of £950,000”, along with four of her neon works for around £60,000 each. Goodman Gallery placed a Yinka Shonibare painting for £135,000 and Tiwani Contemporary reported a sell-out stand on the first day, including three Joy Labinjo paintings for £50,000 each, thanks to “corporate and individual collectors from the UK and US”.

At Frieze Masters, the London dealer Johnny Van Haeften says he is “over the moon” that the pound is pricing much of his stock so competitively for foreign buyers. “Old Masters work differently to contemporary; often we can barely move the stuff,” he says. And move it he did, selling a $10m Jan Brueghel the Elder painting on his stand to a new client from outside the UK on the first day.

Chatter about galleries switching currencies from sterling to dollar to mitigate steep exchange rates is largely unfounded, with artists based in the UK mostly being priced in pounds, as is the industry standard. Nonetheless, exceptions can be found: a 2022 triptych by the London-based British painter Lynette Yiadom-Boakye at Corvi-Mora’s stand was sold in the first hours of the fair for a price “in the region of $600,000 to $700,000”, a gallery spokesperson says.

There was widespread apprehension that many serious and casual collectors alike would skip this year’s Frieze in favour of the inaugural Paris + par Art Basel fair next week. This was ostensibly quelled by long queues to enter during the VIP opening on Wednesday—ironically deterring some serious collectors in the first hours, says Elisabeth Sann, the director at Jack Shainman in New York: “Frieze cast their invitation wide, possibly because they anticipated a dearth of people. As a result, in the early hours of day one we had many casual visitors who typically are found in later days of the fair.” She adds that a typical number of the gallery’s regular collectors, most of whom are based in the US, came to the stand, and that more day-two sales were expected than in previous editions of Frieze London.

Galleries reported a number of seven-figure sales on the second day of the fair, including Waddington Custot selling a Serge Poliakoff painting for £1.5m to an existing European client. Two dealers were overheard in a queue for coffee, complaining of crowds. “It’s the most packed Frieze London I’ve ever been to,” one said. “But better than last year, which was a funeral,” replied the other.

Nonetheless, this year’s Frieze “feels local” compared to pre-pandemic editions, according to some, including the London-based adviser Lawrence Van Hagen. “There weren’t the big groups of super-wealthy Americans or Asians this year, as in previous years,” he says. High-profile Americans in attendance include Pamela Kramlich and Laurie Tisch. Van Hagen adds that most of the works on sale at Frieze that his clients wanted are priced in dollars, and that by halfway through the fair’s second day they were all still available.

Frieze Week auction sales—all of which must be priced in sterling—seem also to be benefiting from the favourable exchange rate. Healthy results were achieved at yesterday’s Christie’s white-glove evening sale of 20th- and 21st-century art, making £72.5m (including fees) against a high estimate of £60.9m (calculated without fees). David Hockney’s seaside landscape, Early Morning, Sainte-Maxime (1968-69), fetched more than double its high estimate, making £20.8m (with fees). A visceral Tracey Emin painting from 2022, touching on her experience of bladder cancer, sold by the artist to benefit her TKE Studios project in Margate, made £2.3m (with fees) against a high estimate of £800,000. A breakdown of bidders by region shows that 25% were from the US, a 10% increase from the equivalent sale last year.

The week’s strong signals are providing a glimmer of hope for London’s art market, which has faced a trifecta of challenges in Brexit, the Covid-19 pandemic and political turmoil. Speaking to dealers at the fair, it does seem that the dust of Brexit is finally settling and things are not as catastrophic as feared. A number of European galleries at Frieze London 2021—the first after the UK left the EU’s single market—described the process of importing art to the fair as “a mess” of extreme delays and unexpected red tape. These issues haven’t disappeared entirely, but dealers have now adapted, albeit begrudgingly, to the new normal.

“We had issues last year, of course, but now we’ve learned the lessons,” says Javier Peres of Peres Projects, which has spaces in Berlin, Milan and Seoul. “It’s a little more expensive but nothing that a high-net-worth collector can’t swallow. You just add an extra week now. It’s not that big of a deal.” This is echoed by Jennifer Chert, the founder of Berlin gallery ChertLüdde, who says it’s not only the art industry that has grown accustomed to Brexit bureaucracy but many other actors, too, from shippers to customs officials. Chert says the UK’s low VAT for art—5% compared with Germany’s 19%—continues to prove advantageous, even though the process is still “expensive and a headache”.

Outside the UK, there are further signs that the art trade is rebounding: shipping costs for air and sea freight, which in the past two years surged due to the pandemic and Russia’s unprovoked invasion of Ukraine, are finally returning to pre-Covid-19 levels according to a survey of shipping costs published this week, with freight rates between Asia and Europe “down considerably” and now below 2021 prices. Rates from China to the US West Coast dropped 20% this week, to an average of $2,361 per shipment—compared with $20,000 a year ago. Major delays have decreased, too, with the latter trip taking 83 days now, rather than 112 as it did earlier this year. These improvements are attributed to decreased demand due to the global economic crisis as well as the higher cost of air cargo as passenger travel recovers.

But can the UK’s art industry capitalise on a moment of fortune to maintain its competitive edge, especially with rising centres in Asia and Europe vying for its trade? A sign of Frieze’s waning relevance on the global stage can be inferred from the absence of a number of US and international galleries that attended either the 2020 or 2021 editions of Frieze London but will show at Paris + this year—including Paula Cooper, Marian Goodman and LGDR.

This is a key concern for Hugh Barclay, the UK director of the Affordable Art Fair, which holds its London event from 20 to 23 October. Last month, he penned an open letter to Michelle Donellan, the UK’s culture minister, on behalf of European galleries seeking to do commerce in the UK and vice versa, advocating for “frictionless trade” with no tariffs. “As the largest art fair organiser, we have seen a 30% drop in international galleries coming to the UK,” the letter reads. “Our country is experiencing a serious trade evolution, galleries aren’t responding to this post-Brexit world in a favourable way. As a result, it is reducing our access to global culture and causing economic detriment.”

Whether the British government will take heed remains to be seen. Prime Minister Liz Truss faces mounting pressure from her own party to rewrite a scaled-back budget that has caused political and economic turmoil.

“The recent fall in the value of sterling has been so fast that luxury prices have probably not yet adjusted to offset the currency moves, and some short-lived bargains are therefore available,” Paul Donovan, the chief economist of UBS Wealth Management, says. “The current financial market turmoil, linked directly to a debt-laden set of government tax proposals, may have some reputational damage. The speed of the Bank of England’s response—and the suitability of the measures—might mitigate some of the damage” to the luxury goods sector, including art.

The present currency disparity, opportune as it may be for some, is unlikely to last forever and sources of concern remain for British dealers. Van Haeften cites a particular bugbear: the UK’s import VAT for art from overseas. He is part of the British Art Market Federation, which continues to lobby for its repeal.