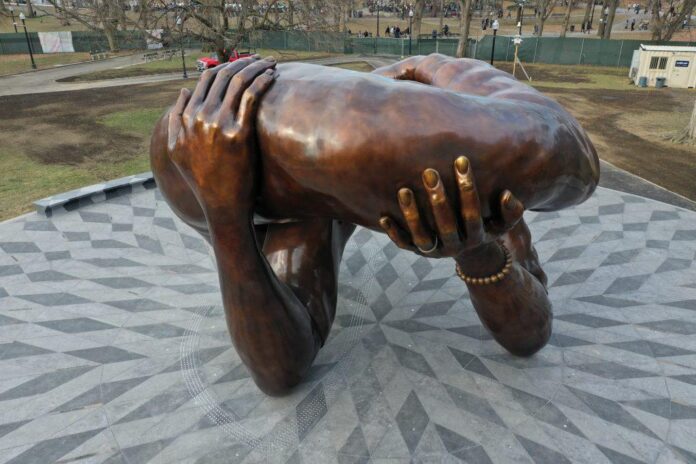 The Future of Democracy Concerns MoMA’s Head – “What worries me is whether democracy itself will survive the next decade,” Glenn Lowry told art advisor and critic Allan Schwartzman and journalist Charlotte Burns in their newly launched podcast “The Art World: What If… ?!”. The reasons?” The intolerance of other people’s opinions,” the veteran museum director noted. “[It] presages a condition in which we lose all ability to negotiate difference.” Rather than providing answers to questions, museums should be the space that places art in the center of conversations, a place that provoke questions, Lowry said. ()

NFL Super Bowl to Feature Artist Lucinda Hinojos’s Work – Next month’s Super Bowl LVII event will see artworks and tickets designed by the Chicana and Indigenous artist. The Arizona-based artist will team up with fellow Indigenous artists to create a 9,500-square-foot mural, the largest Super Bowl has ever seen. She will also create an artwork to be featured on the tickets, and a new design for footballs that will be available for sale. ()

Hank Willis Thomas’s Martin Luther King Jr. Monument – The artist’s sculpture in Boston has become the subject of unflattering comparisons. Featuring the disembodied arms of the civil rights leader in an embrace with his wife, Coretta Scott King, a fair number of Twitter users—and at least one relative of the Kings’s—think it looks like a turd, or worse, a phallus. The “insulting” artwork “looks more like a pair of hands hugging a beefy penis than a special moment shared by the iconic couple,” according to Seneca Scott, first cousin of Scott King. The artist, meanwhile, has just joined mega gallery Pace, which in February acquired Thomas’s former rep, Kayne Griffin of Los Angeles. ( and )

Art Experts Try to Pick Out A.I.-Made Art From Masterpieces – Apparently, A.I.-generated art is now so sophisticated that it can even deceive the critical eyes of experts; even those like Bendor Grosvenor, art historian and presenter of the BBC’s  JJ Charlesworth, art critic and editor of and Pilar Ordovas, founder of the Mayfair gallery Ordovas. In a recent test on the Guardian, they had some wrong answers. Can you do better? ()

SFMOMA Acquires an NFT – (2022) by artist Lynn Hershman Leeson has become the first NFT artwork acquired by San Francisco Museum of Modern Art, by way of a gift. The piece is a clip of Leeson’s film (1997); there are two existing edition. One was donated by Altman Siegel gallery and Hershman Leeson to the museum for the 2022 Art Bash Auction, which was sold for $9,000 to an unnamed bidder. ()

Hiroshi Sugimoto Monument to Be Unveiled in San Francisco – , a towering 70-foot-tall stainless steel sculpture that looks like a needle, is expected to be unveiled in May at Yerba Buena Hilltop Park on Yerba Buena Island. The $2 million public art commission is a part of a $50 million park development. ()

Kobe Bryant’s MVP Season Jersey Could Fetch $7M – The signed jersey that the NBA star wore in 25 games during the 2007 and 2008 season will go on sale on Sotheby’s online platform from February 2 to 9. ()

Nine-Year-Old Future Paleontologist Finds Megalodon Tooth – Molly Sampson, 9, found a five-inch-long megalodon tooth while spending Christmas Day with her family in Maryland’s Chesapeake Bay to hunt for fossils. Sampson has already found over 400 teeth but this was the biggest she has ever found—it was bigger than her hand. ()

Dalai Lama Spreads the Message of Hope with Art – 2023 is a year of hope, according to His Holiness the 14th Dalai Lama, who launched the video work with the Cultural Institute of Radical Contemporary Arts (CIRCA) on public screens in London, Melbourne, Berlin, and Los Angeles. The work is broadcasted throughout January at 8:23 p.m. local time at various screens. A limited edition screen print priced at £150 ($183) will also be available for sale to raise funds for Tibet Hope Centre and CIRCA’s free public art program. ()

Throughout January, HHDL will participate in the globally renowned @circa__art free public art programme with a message of hope for the world. #TheArtofHope will appear every evening at 20:23 across screens in London, Melbourne, Berlin and Los Angeles https://t.co/JZla8Qtbbc pic.twitter.com/gVSSWzP1nn