Home News What I Buy and Why: ‘Cultured’ Magazine Founder Sarah Harrelson on the... 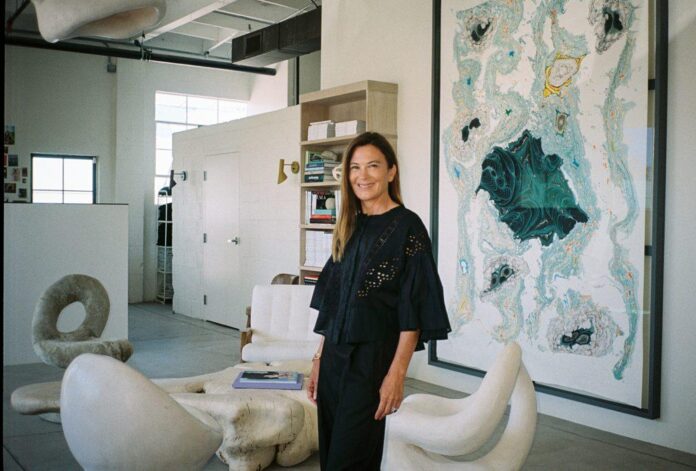 Ten years ago, Sarah Harrelson founded , a glossy print magazine dedicated to art, architecture, and design. A veteran of the publishing world, she was the founder of the ’s “Home and Design” section, and previously served as editor in chief of  and .

Though Harrelson and husband Austin Harrelson, an interior designer, have lived in Los Angeles since last year, her immersion in the Miami Beach art scene dates to when the couple moved there in 2000—two years before Art Basel made its debut in the U.S. She was one of the few editors on the ground covering the inaugural edition.

This early immersion in the contemporary art fair circuit introduced Harrelson to the work of many young artists. Over the years, she and her husband have built up a significant collection, including works by Jonathan Lyndon Chase, Donna Huanca, Neil Baloufa, Janette Mundt, Bunny Rogers, Elle Perez, and Josh Kline.

Ahead of the art world’s annual pilgrimage to South Florida, we spoke to Harrelson about how she built her collection and the joy each work brings her. 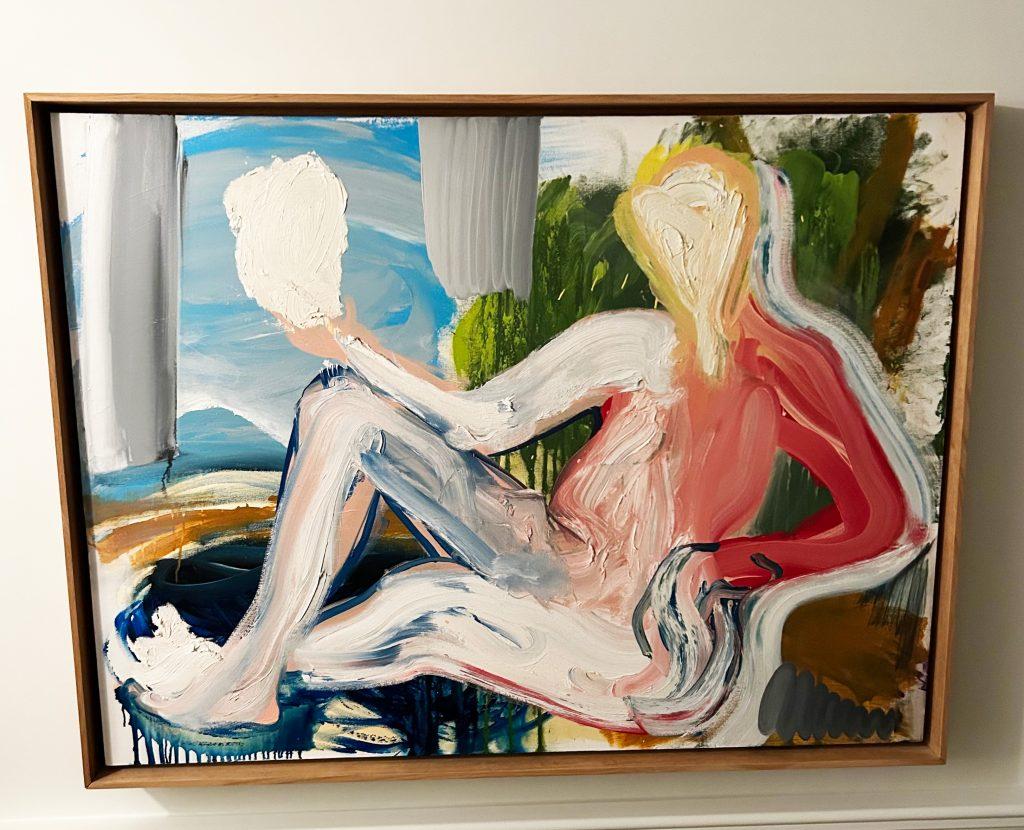 My husband and I were at Art Basel Switzerland in 2010 and fell in love with a Spencer Sweeney painting from [New York dealer] Gavin Brown. I think it’s a self-portrait. Dara Friedman, a dear friend of mine from Miami and a great video artist, told me to go check out that work. I tend to think that another artist going out of their way to make you aware of an artwork is the highest recommendation it can get. The piece was in our bedroom until we relocated to Los Angeles in 2021 and there is a strong possibility it will end up there once again.

Hugh Hayden has been on my radar since he was finishing up his degree at Columbia University. I had always been interested in his trajectory and how he studied and worked in architecture for a decade before going to get his MFA. Olivier Babin from Clearing is a good friend, so when something became available recently, I was thrilled. I have not installed it yet, but will very soon! 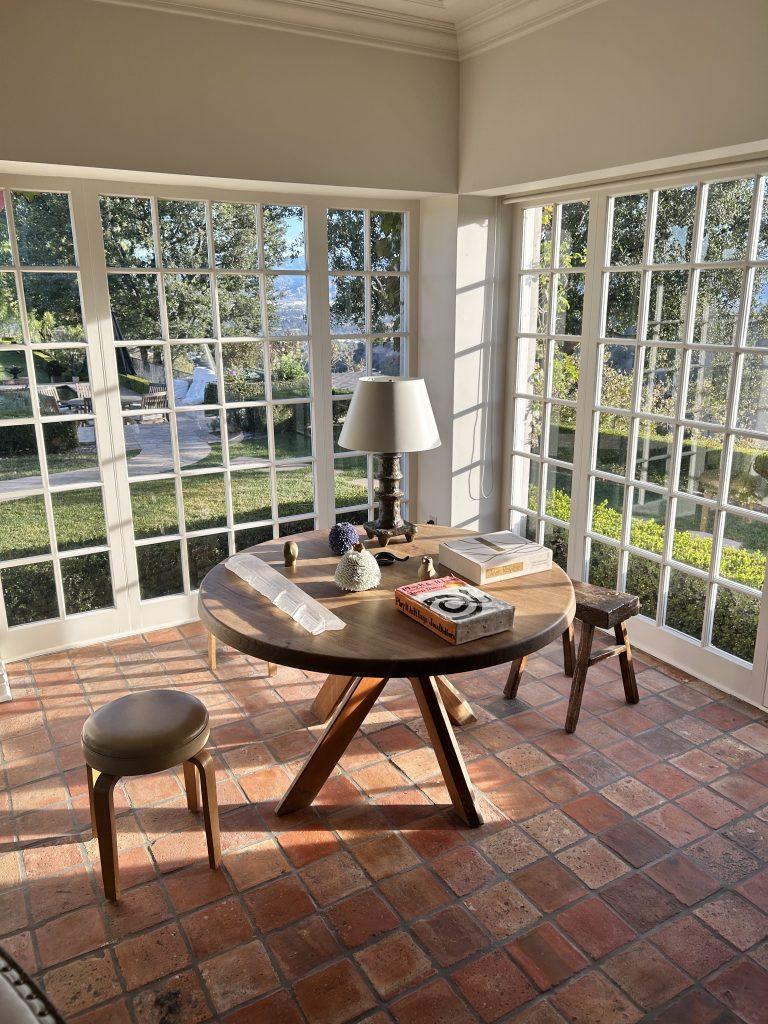 There are so many people I am obsessed with. We are incredibly lucky to be living through what feels like a flood rush of creative energy and artistic growth.

We just had the privilege of featuring Charles Gaines and Jenny Holzer in the magazine, two influential artists whose work has been extremely important to the younger generation of artists whose work we were fortunate enough to collect early on.

In terms of what I have had the financial capacity to take home with me, its mostly been the work of super emerging artists that has been accessible to us. While being able to support an artist early on is a privilege because you get to see them grow and follow the story, I would also love to be able to contextualize some of those pieces with the work of pioneering radicals like Charles and Jenny who came before them, and who in many ways I think made their practices possible… one can dream!

The Arthur Jafa piece we have in our living room, which we also bought from Gavin Brown. A.J. is simply one of the most singular artists of our time, and it is a great joy to live with an artwork by an artist I deeply respect and admire. 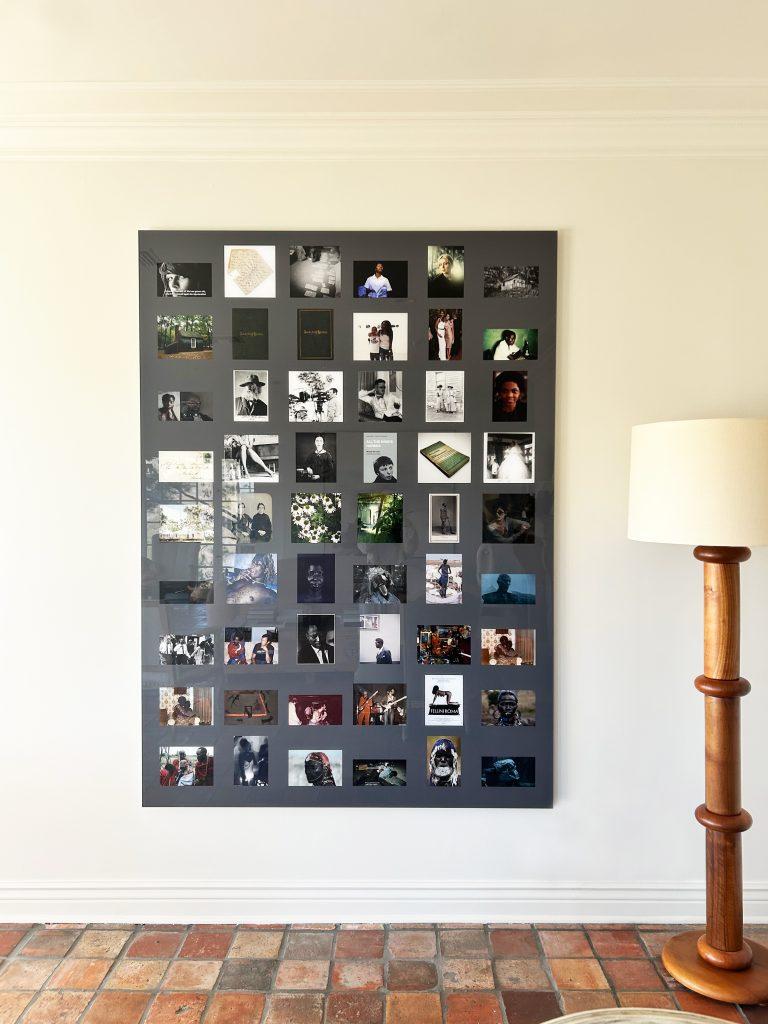 While I certainly feel that we have developed intimate relationships with a few galleries, I also always find myself buying new places or somewhere I never expected to find work. I think that’s what makes it so exciting for us, the diversity of experiences we’ve had over the years in our pursuit of new acquisitions—and of course the thrill of discovery.

Even if I like a work less than I originally thought I would, I never regret supporting an artist or a gallery. 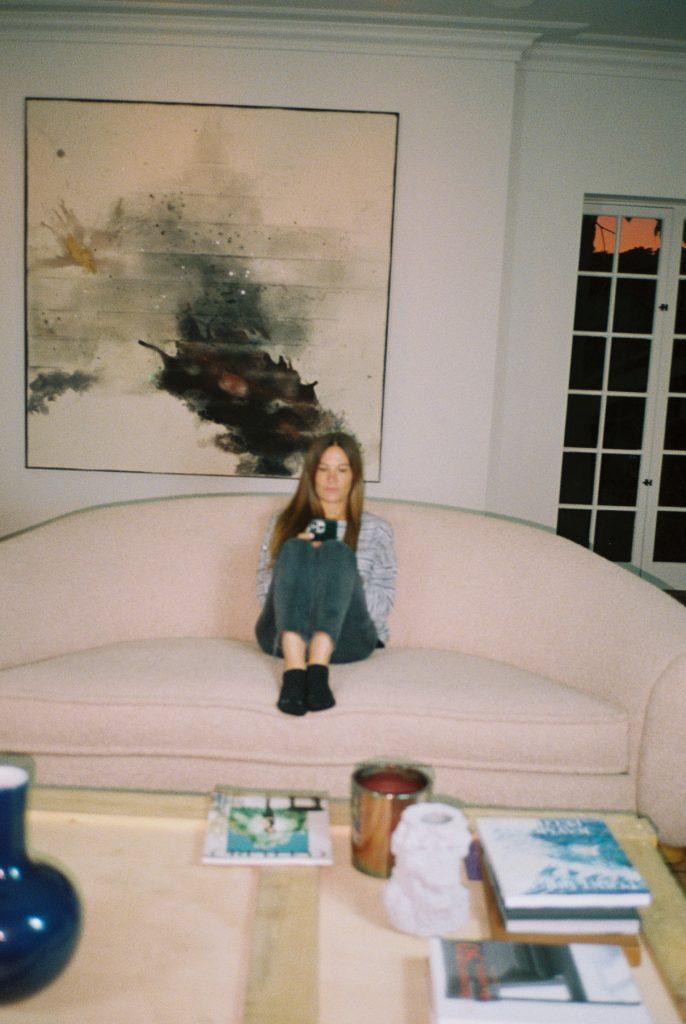 Sarah Harrelson in front of a painting by Lucy Dodd. Photo by Emma Pickett.

I have a painting by Lucy Dodd that I purchased around the time she was an artist-in-residence at the Rubell Museum (which was the Rubell Family Collection at that time) above the sofa in the living room. In addition to the unabashed beauty of Lucy’s work, her uncanny relationship with nature and organic materials brings her work into a conversation with L.A.’s incredible flora and fauna that peek into the room through the windows on either side of the painting.

In my bathroom, there’s a work by Timo Fahler. We first met Timo eight years ago. He was a studio assistant working with Mary Weatherford when we photographed her for our cover. He just had an incredible sculpture from his MOCA Tucson exhibition acquired by LACMA. 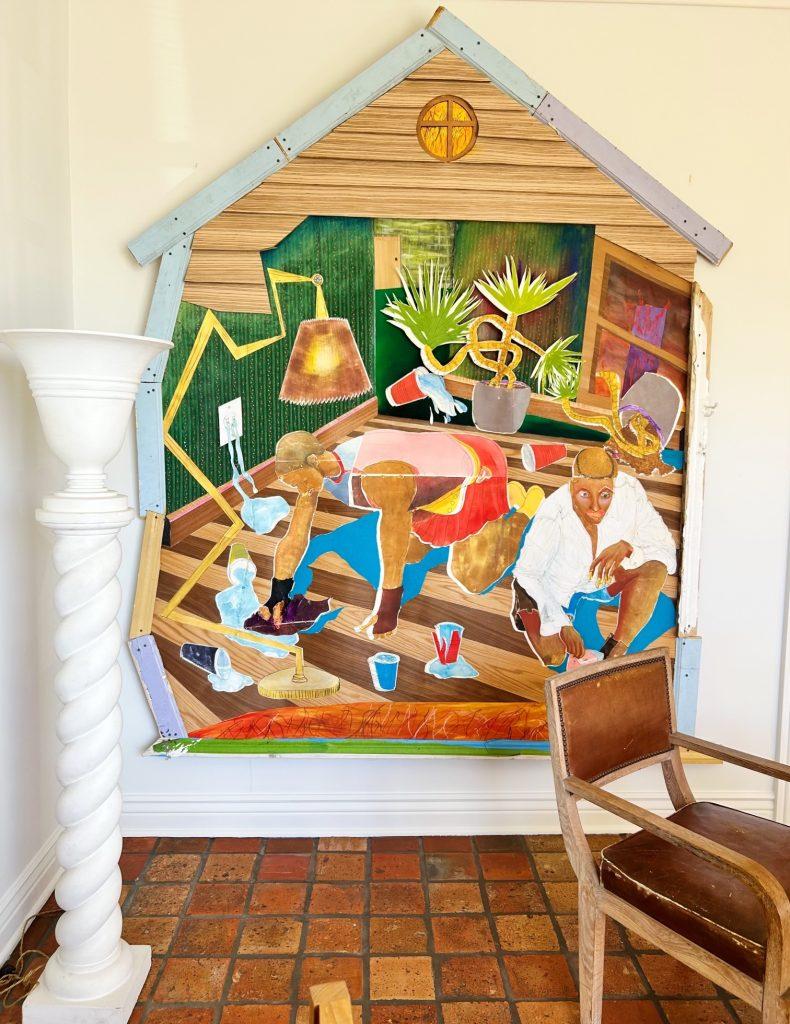 It’s not so much impractical as it is magical, but we have a small lightbox that Anicka Yi made about a decade ago. It is just gorgeous when it glows.

It always pains me to answer this question because it still stings not to have seized the moment but… Sondra Perry, Oscar Murrillo, Diamond Stingily, and Cameron Rowland. 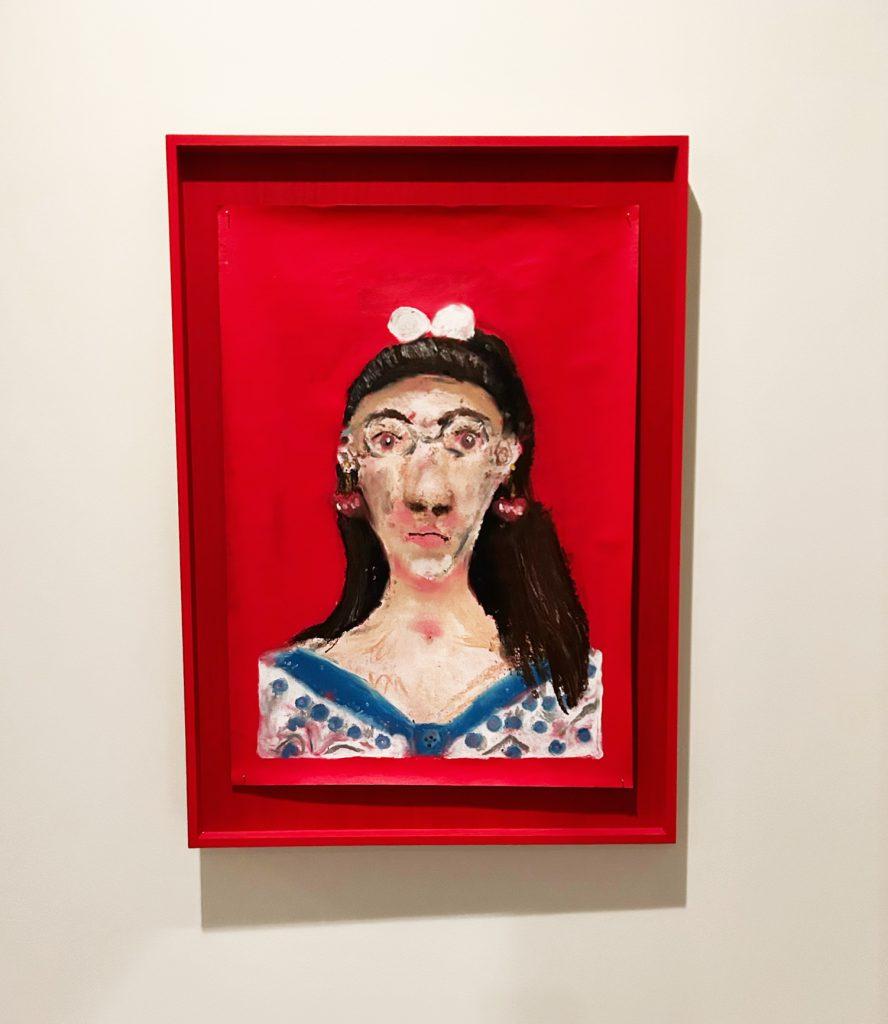 It would have to be a Lynette Yiadom Boakye. She is a lyricist with the brush and a force with form.